Coming Out of the Monsoon in Jadan Organic Gardens - August 2017

Right on cue, the rains turned off on the last day of July and our cultivated areas started to dry out.

The Big Garden areas were all partially flooded and badly needed to drain, otherwise we would have lost all of our vegetables out there. In the meantime, the weeds in our corn and cucumber/phoot kakri field were removed, and then we continued to remove long grasses from moong and cowpeas and beans in the Shiv Bagh.

We opened up airflow by removing jungle weeds on the fallow west side in an area of 250 square metres, which could be done in a day because the roots were so loose from the rains, and also the more fertile the soil the easier it is to pull out weeds. This was especially the case in the gobar pathways where – though weeds had managed to struggle through layers of plastics and old carpets – the roots were unable to penetrate deeply, and therefore there was an element of success here as they are really easy to pull out by hand. All of the tall grasses removed were used as mulch to block the weeds between the rows of roses and other ornamental bushes and shrubs. 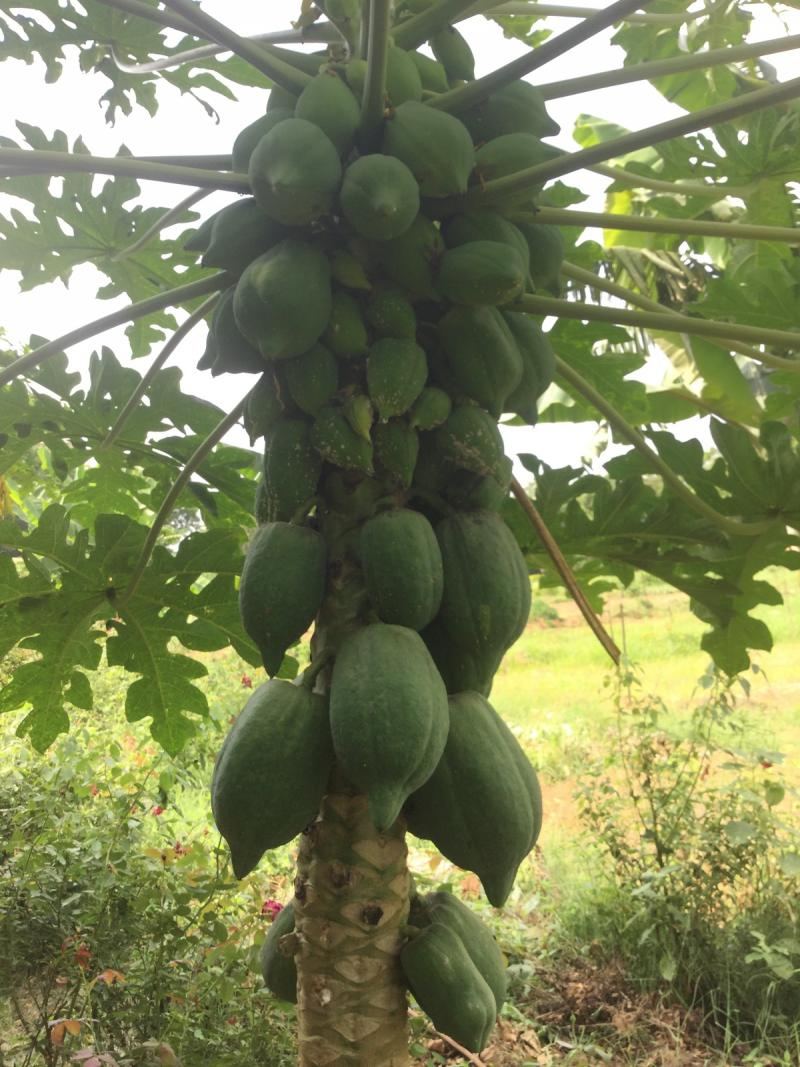 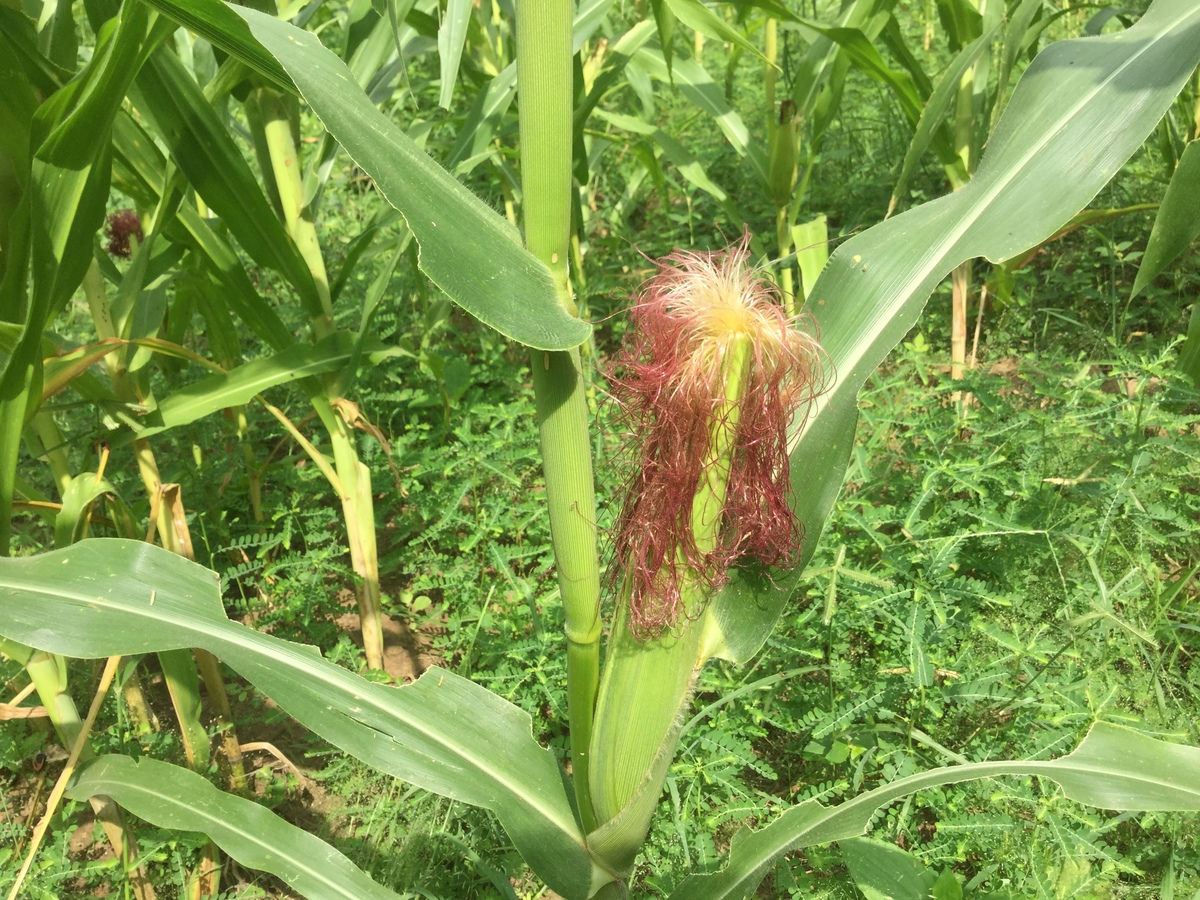 Curiously, 5 plants out of the 135 chilli bushes that we transplanted to the Shiv Bagh last August, are now thriving and producing plump fruits. This is a high quality seed from a village near Jodphur – an area well known for chilli production.

We only spent a few days on the Shiv Bagh this month and moved to the Big Garden where there was still part of the main pathway to be weeded and the first round of the main monsoon vegetable weeding to be continued, now that the soil is not flooded. After the heavy rains of the 28th and 29th, thousands of worms had emerged from the gobar slurry that was spread in this area in June, and then they all drowned resulting in a really really bad smell – but maybe they will have some positive effect as a fertiliser for the soil. In fact, our resident storks snacked on most of these for a few days and the soil remained moist for the remainder of the month.

During the last week we started to harvest cucumbers and okra and on the 31st a 3.5kg pumpkin. The weeds came up heavily again soon after the first round of weeding was completed, and so will need to be removed at the beginning of next month. 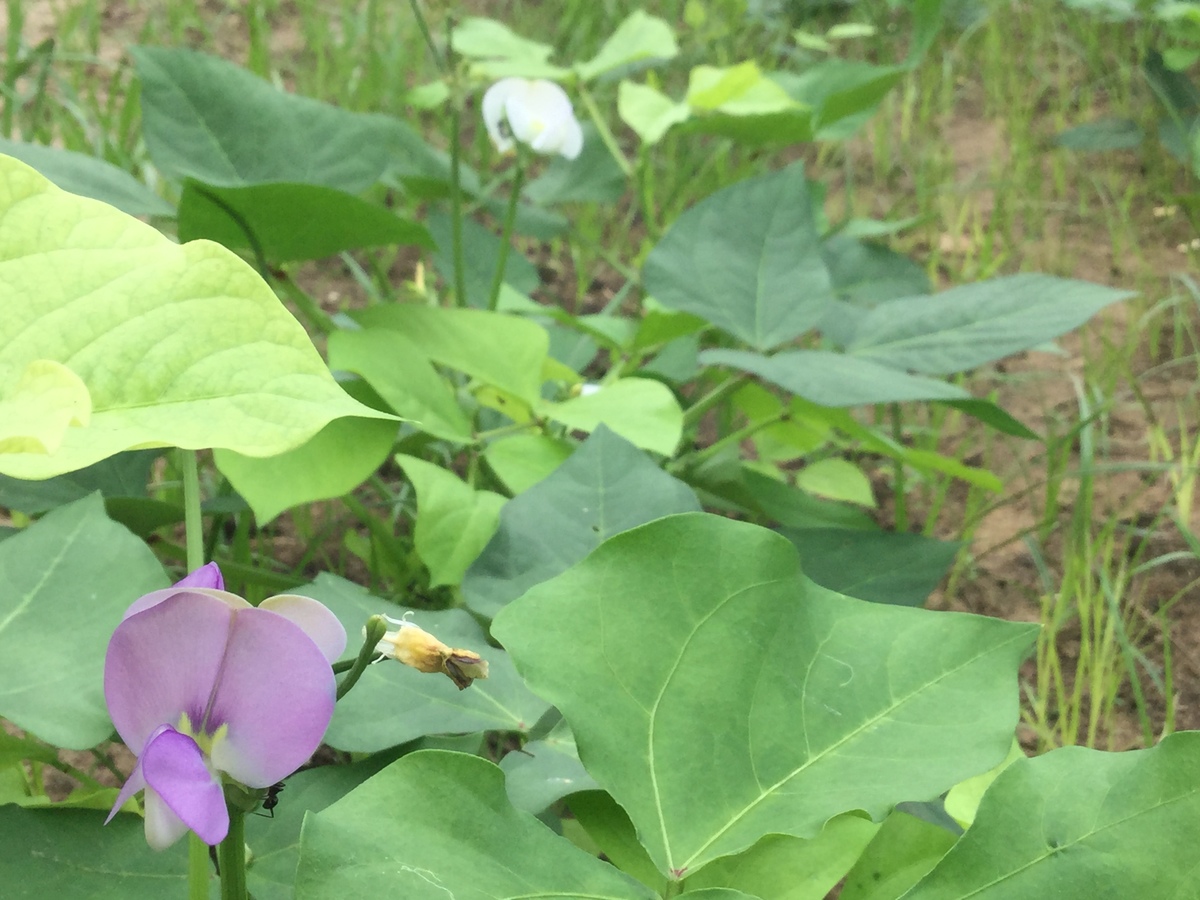 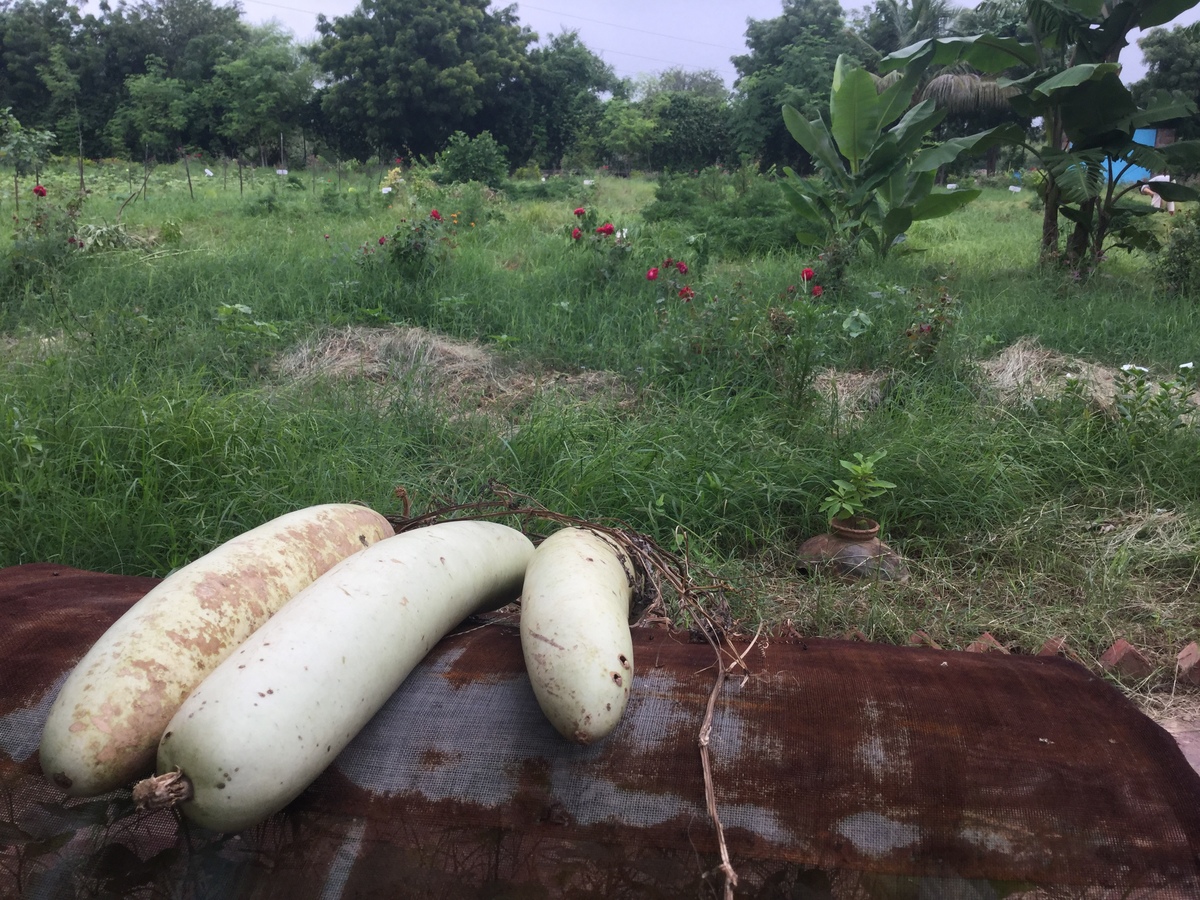 The temperature this month ranged from 26 to 36 degrees celsius and maximum humidity was mostly above 90%, so when the sun came out so did our sweat, and as a result there were 10 days when we sought work outside the steamy airless cultivated areas and shifted to open nature strip areas, where monsoon weeds needed to be pulled and shrubs and branches pruned. As a result of this action, we cleared an accumulative area of 2 square kilometres, and there is a lot more to be done.

Lemon harvest started late this year and the upper orchard is not yet accessible due to bogging. To date, 35kg have been harvested from the orchard near the OM canteen. We have already sold some produce and Janaki made the first batch of her special sweet and spicy lemon chutney at the end of the month. 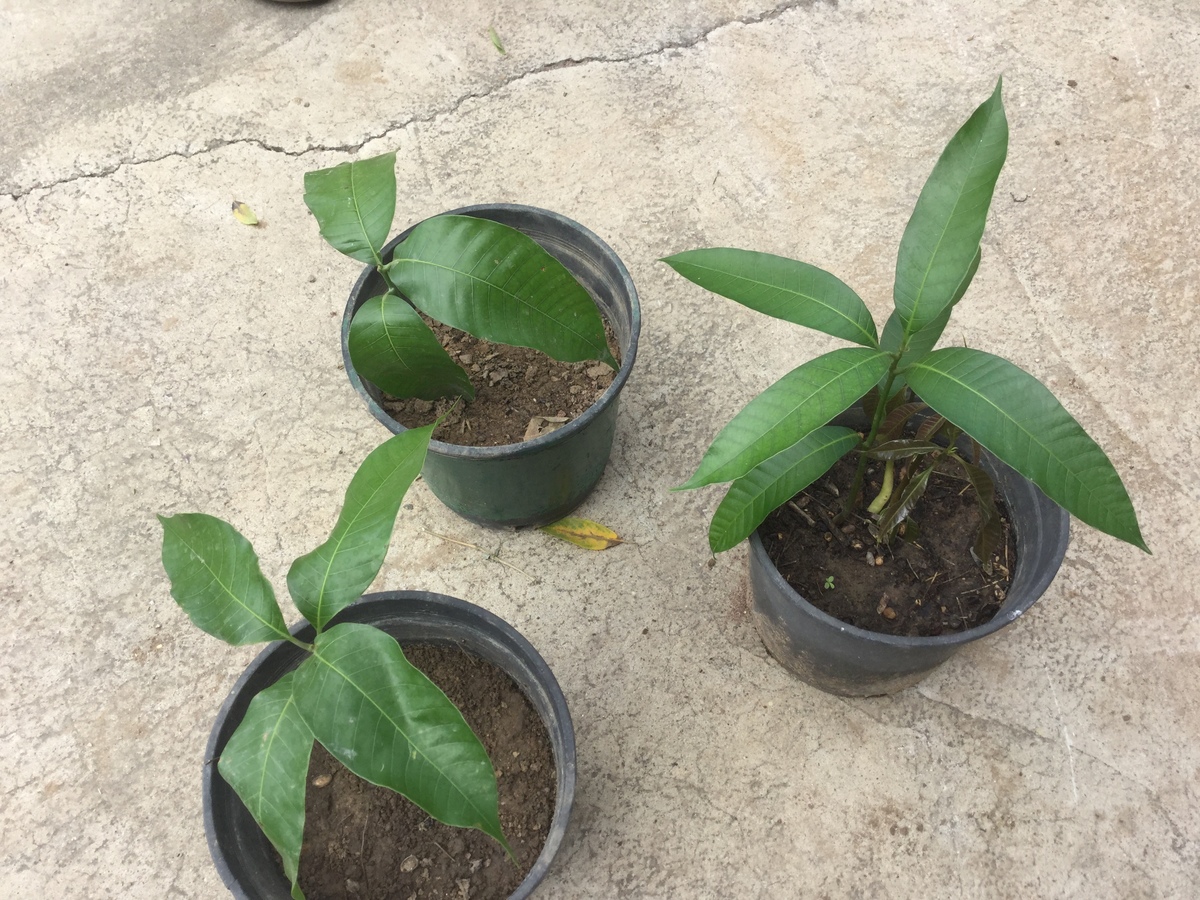 The 2017 monsoon in India, as well as Nepal and Bangladesh, has had a devastating effect on an estimated 24 million people. Here we have only received blessing after blessing, and the only heavy rains in August were on the 8th and 9th and then there was nothing until the 20th. Since then, we've had just simple short showers, perfect for agriculture. Heavy rain was due on the 3rd and 4th of September in this area and then it would appear that the monsoon will weaken and then perhaps we shall not see a drop of rain for 6 months.

September is usually when we start to harvest our monsoon vegetables, and this year we have pumpkin, luffa, okra and bottle gourd, cowpeas, cucumber and corn, as well as moong and some snap melon. Unfortunately a large area cultivated with guar phali (cluster beans) did not survive the flooding of our cultivated area in the Big Garden.

In our tree nursery, we have some mango babies, bitter almonds and sour green mango (locally known as keri), mowra and belpatra, and there are still some un-potted papaya trees to be transplanted, plus six lemon trees from Nipal Ashram seeds. I have not yet visited our local government C.A.Z.R.I. funded nursery this year, but we usually find some interesting saplings and ornamentals there. 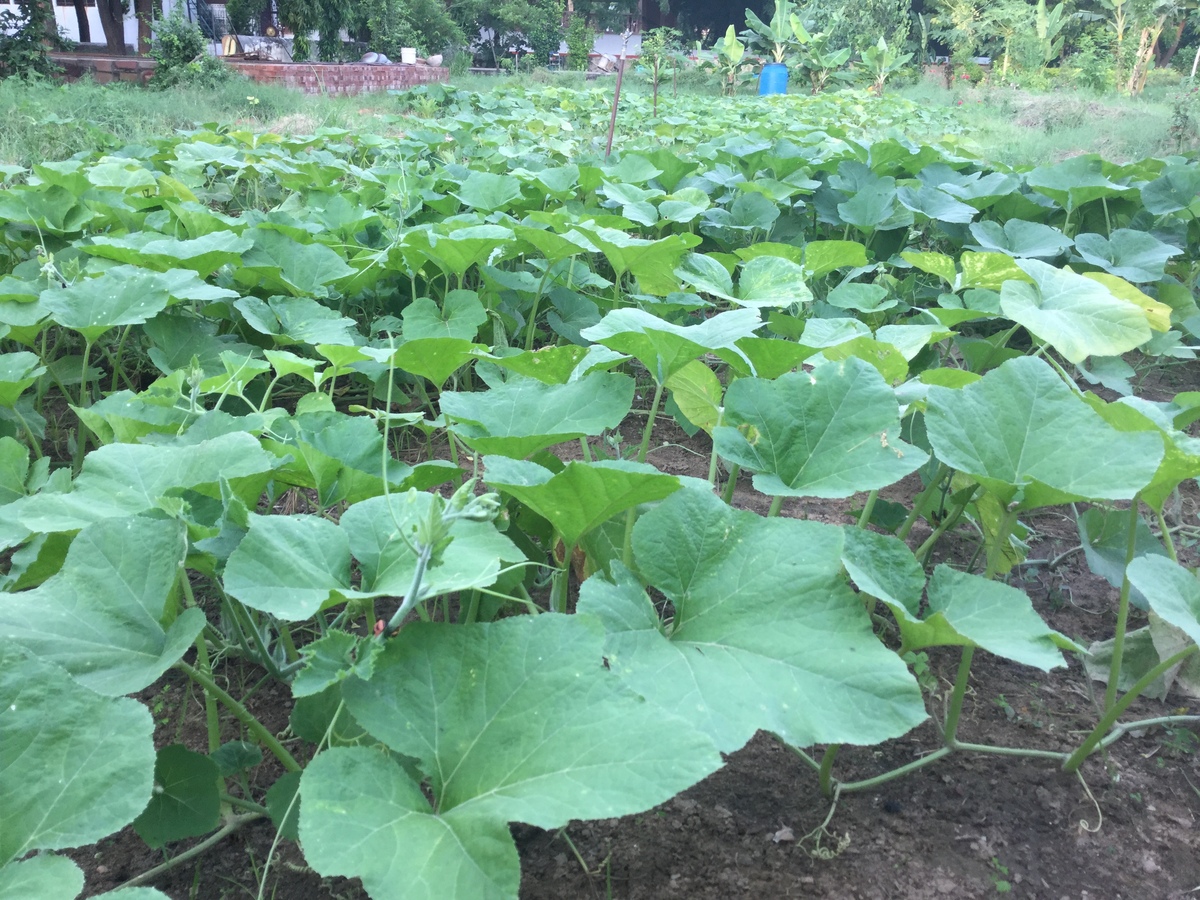 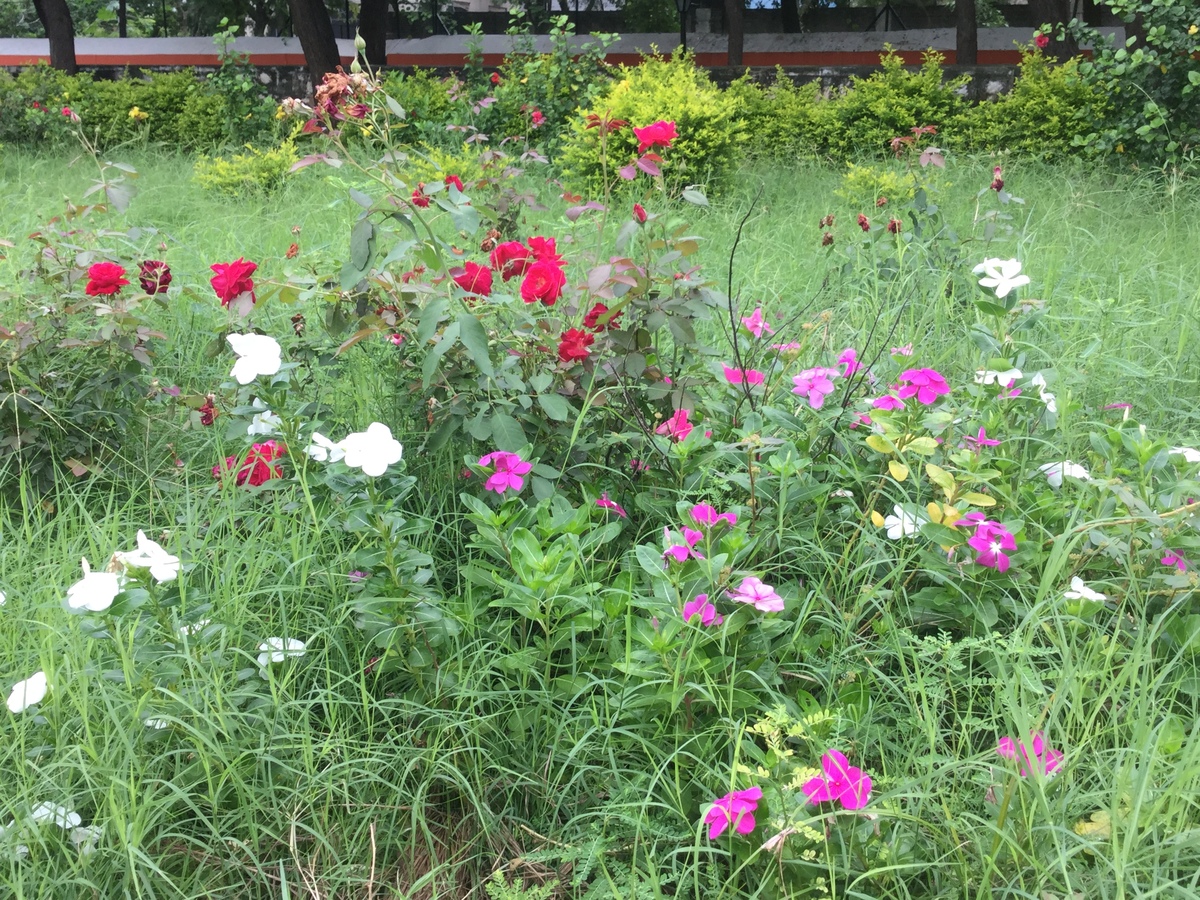 In addition to the weeding and pruning, we also shifted some old gaar (cow dung plaster) and packed it on top of a 60 metre pathway in the Shiv Bagh, since the previous attempt to tame the weeds with plastic sheeting and sandy soil was not a great success. We put some old cement bags over the sandy soil and put the heavier mixture of cow dung and some rough soil over this. It packs down well for a walkway and looks beautiful – let us see how the nut sedge reacts to this! We are still trying to get the upper hand in this battle.

On the 28th and 29th of August, some of the old beds were cleaned up in the Shiv Bagh as the weather became cool and cloudy, and it is good to see some bare soil for a change. The golden hedge also got trimmed to a cubic neatness, and the vines along the west fence line, as well as the moringa trees, were pruned. In September, as is the norm in these parts, the temperature promises to soar towards the high thirties, and so we shall probably need to start running the sprinklers again – only 1 hour was required this month and to get to the pump switch I needed to wade through knee deep water!

It is not easy to let the rainy season go – we have been in its cool and cloudy embrace since June 21st and our ecosystem has transformed as never before. The green will remain for another 2 months and our cows will have some pretty tasty grazing until next spring. In the meanwhile, we will pass through the second summer that comes between the end of the monsoon and the autumn, when the heat will return and the air will start moving more freely and the humidity level will drop. September is for the mountains and I wish all of you that are part of the pioneering group a very safe and spiritual journey – breathe easy!