Beginning of a Cooler Season in Jadan Organic Gardens - November 2017

The month of November in Jadan Ashram always feels like a gift or reward for surviving yet another hot season and then again the post monsoon 'second summer' of September and October.

This month the temperature did not go over 37 degrees celsius and we had a few cooler high twenties days too (minimum 27 celsius) with some hazy cloud cover. Green leafy vegetables of many varieties thrive in this climate, and the sunflowers are comfortable with coming out of the soil and finding the sun to face towards. Generally, European flower varieties are much more likely to grow well during the November to March period.

Half a ton of produce was harvested this month, half of which was lemons.180kg was bottle gourd from the monsoon vegetable garden, which continued to produce pumpkin and bhindi throughout the month and so we reached our 1 ton target for pumpkin!

We planted fenugreek, yellow mustard and linseed in the Shiv Bagh early in the month and all has germinated well. Garlic and tomatoes went in towards the end of the month. Weeding of all the new areas was almost completed by the end of November and this year a lot of Chenopodium album (Lamb’s Quarters) was removed from our cultivated areas. The locals call it cheel and it makes a delicious sabji, or can be mixed into chapatti dough so that the chapatti is completely green! This species is closely related to the grain Quinoa.

European radishes were ready in exactly one month and the lettuce harvest began from the 23rd – so now we have baby spinach, lettuce leaves and a little rocket mixed inside for our lunchtime salad. There are still a few winter seeds to plant – mostly flowers – and these will be sown into prepared beds in the middle of the Shiv Bagh. 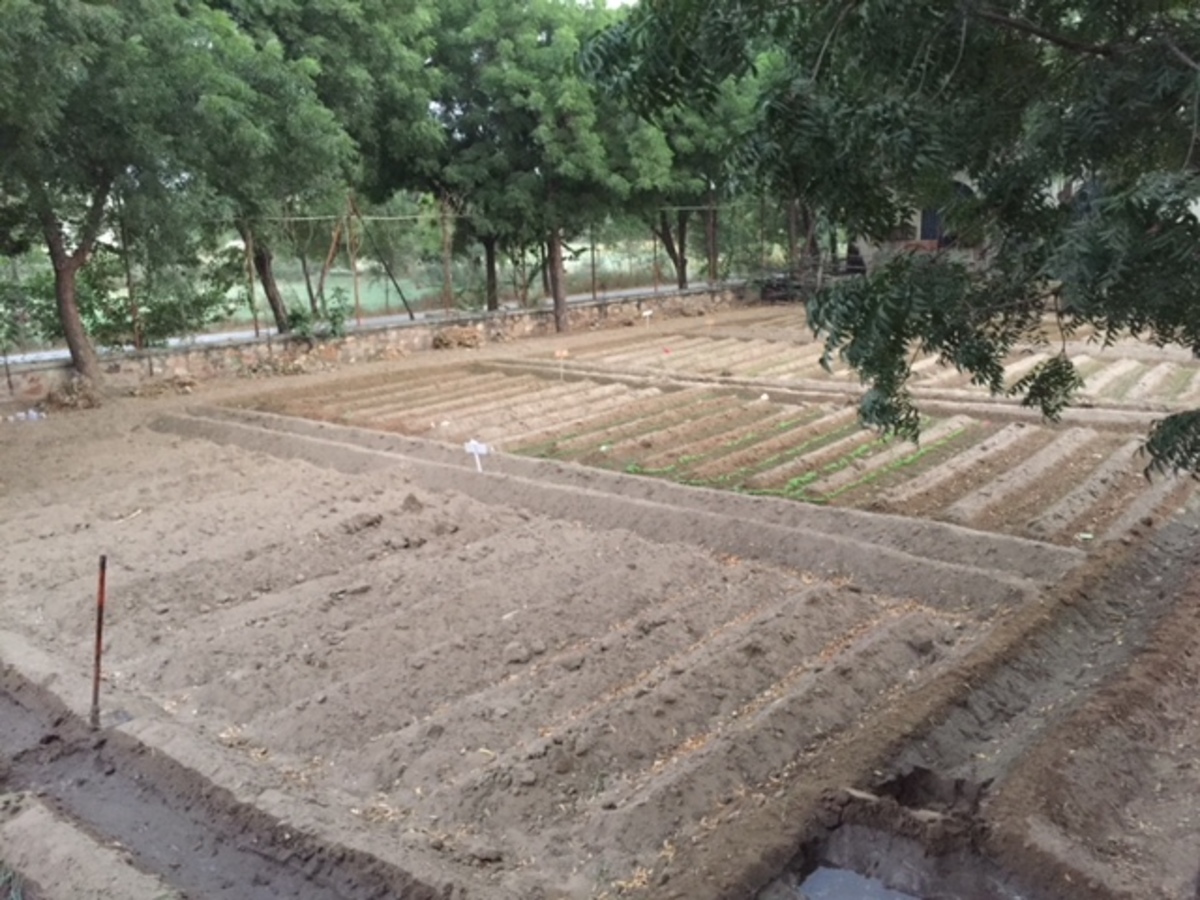 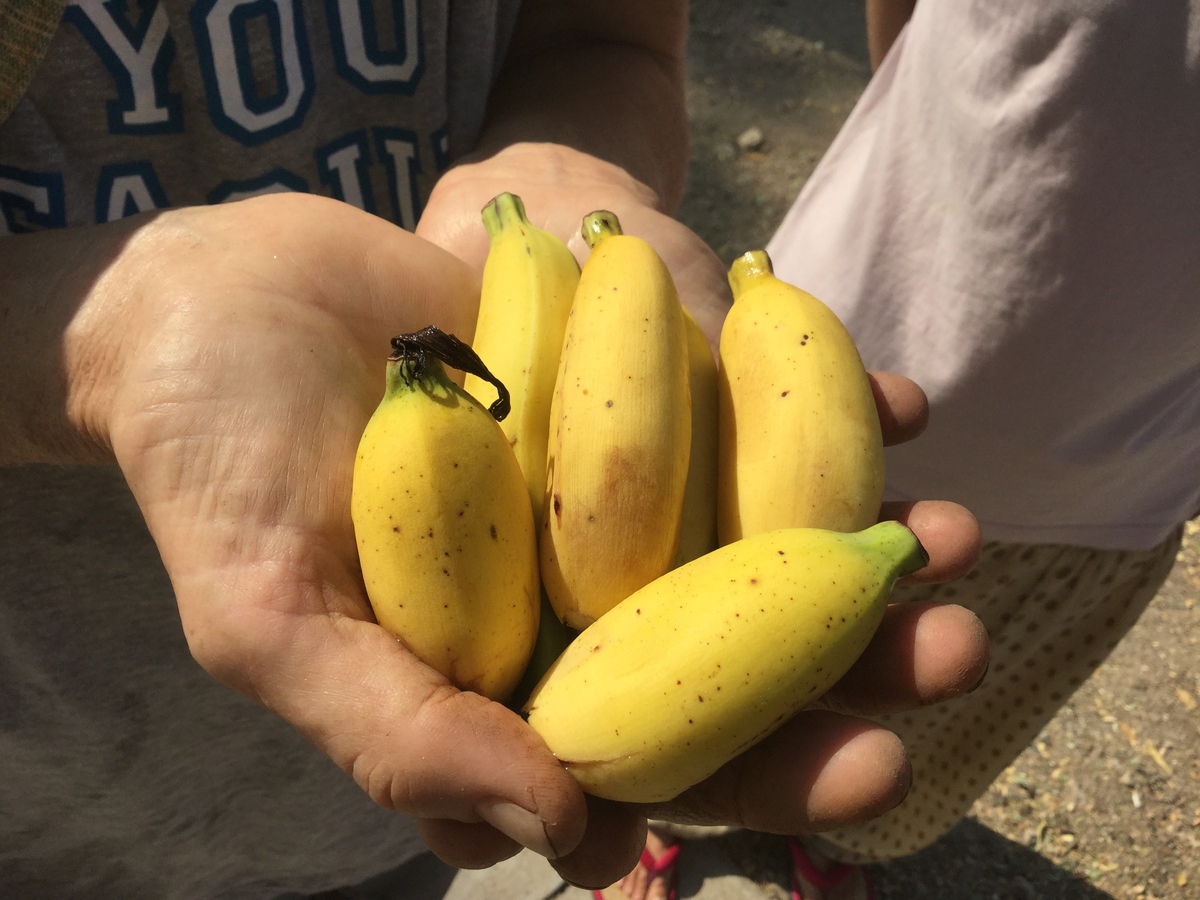 Empty section left for tomatoes - next beds are winter lettuce varieties. Finally the bananas are ripening

This month there has been major cutting of the neem trees around all our residential buildings. After cutting with a local variety of axe the larger branches then need to be chainsawed into smaller pieces so that the wood can be loaded into a trolley and taken to the wood storage area. It is not work for the faint-hearted, as the men had to climb on simple steel frames, which are many metres in height, and then cut the branches. Wasps’ nests were a major impediment especially around the White House. Falling branches another hazard, but all work was done safely except for a few stings!

In the big garden, the annual post monsoon grass-cutting started – there is a lot of grass to remove this year. The upper lemon area is almost inaccessible due to many many dried stalks containing thorny and sticky seeds that pierce through skin or stick to clothing. There will be a lot of work there during the winter months. However the summer jowar was cut and stacked nicely in the gunda orchard and we were able to retrieve some of the irrigation piping from the area for our new plantations. 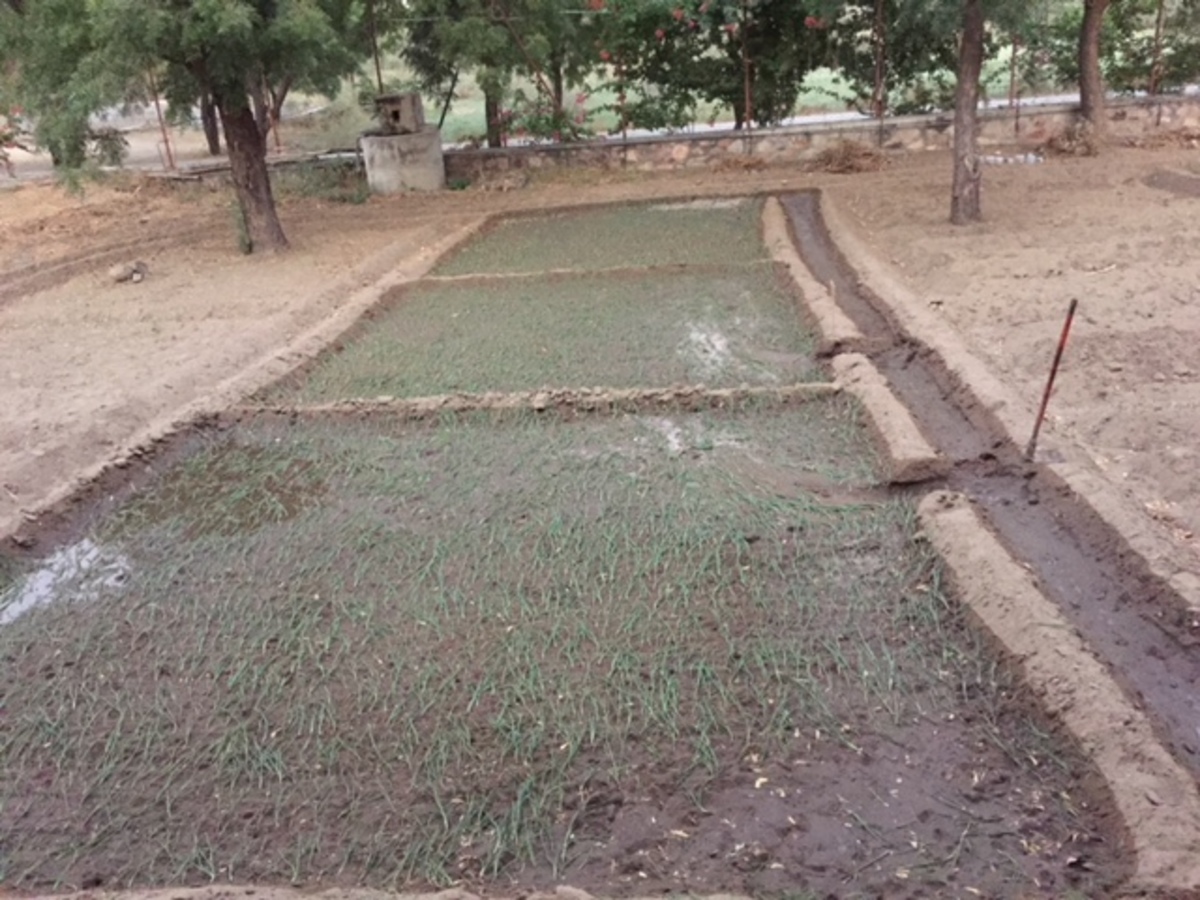 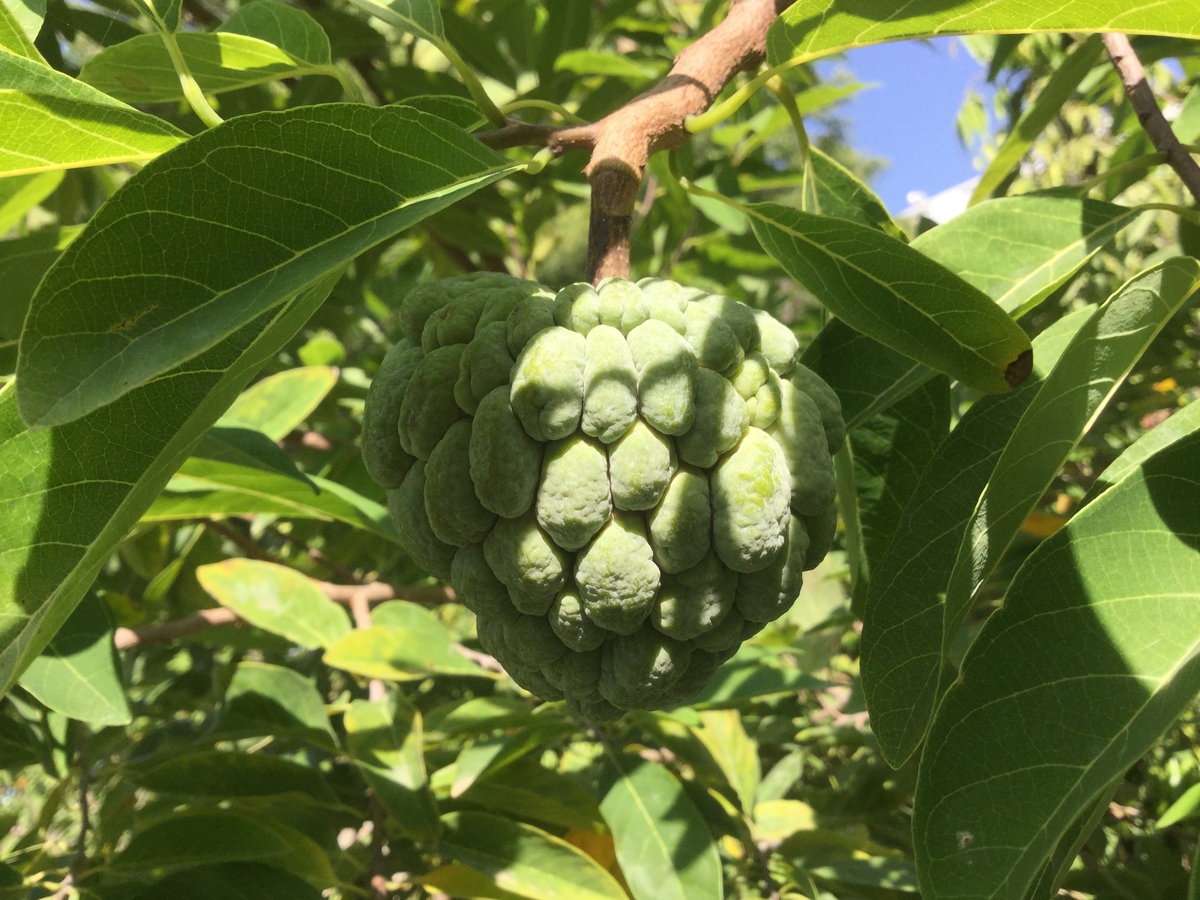 Onions after flood irrigation. Sitaphal ripening on the tree.

Some giloy (Tinospora cordifolia) was collected and cut and put to dry this month and also some Caribbean hibiscus variety, which in Australia they call Roselle. It is sour and full of vitamin C and is a good remedy for urinary disorders.

In our salad garden the saved basil seeds did not germinate, so if anyone coming out in December could bring some good quality sweet basil seeds then we can try again. The Thai basil from last year reseeded itself and has come up in a few places. This is considered to be a holy plant like its sister plant tulasi in some areas of India.

We also did some major weeding of the central part of the Shiv Bagh, where the 2 rows of papaya trees planted during the monsoon months are thriving and starting to flower and fruit. In the cleaned areas we planted different coloured hollyhocks, some sunflowers and also some marigolds and lupins – even lavender seeds, which have repeatedly failed over the years. Let us see what will come – surely some beautiful new colours and forms in God’s Garden. 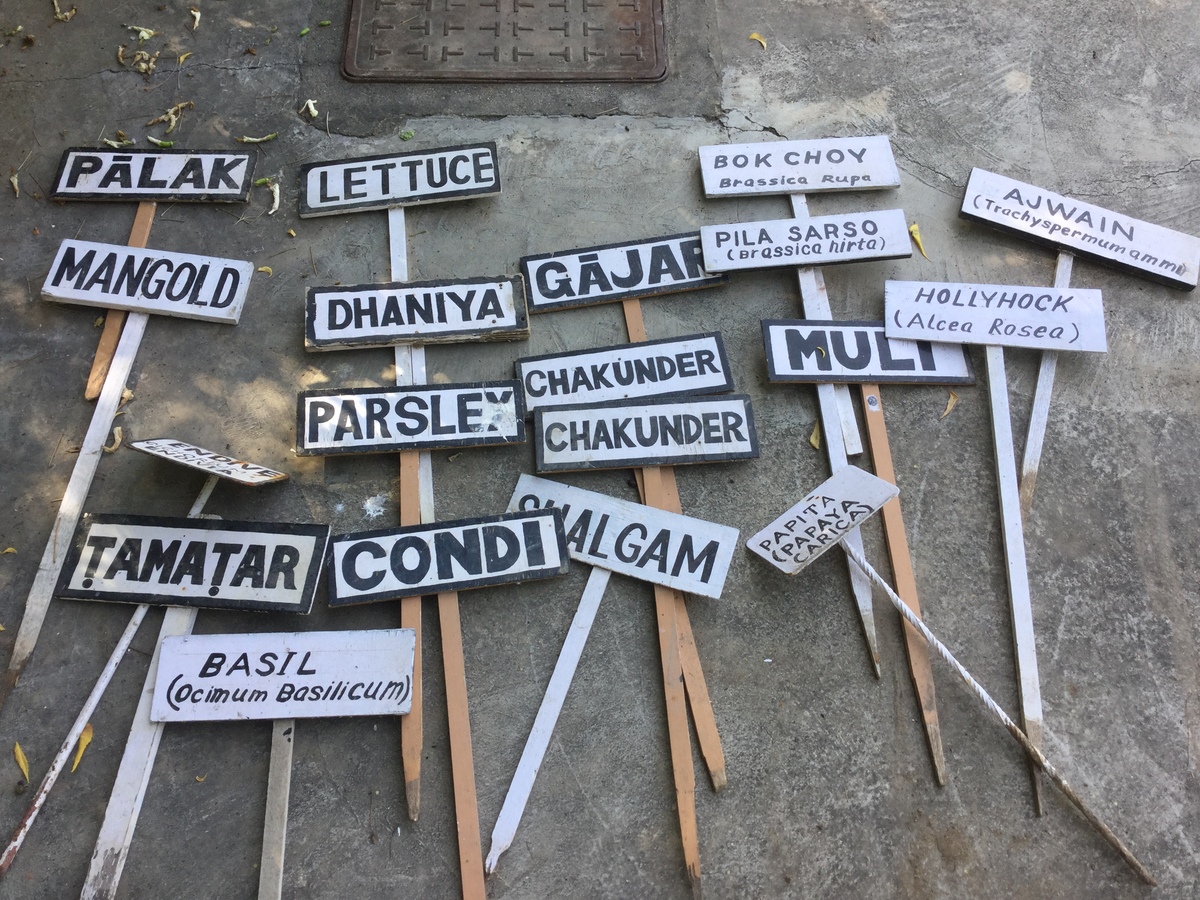 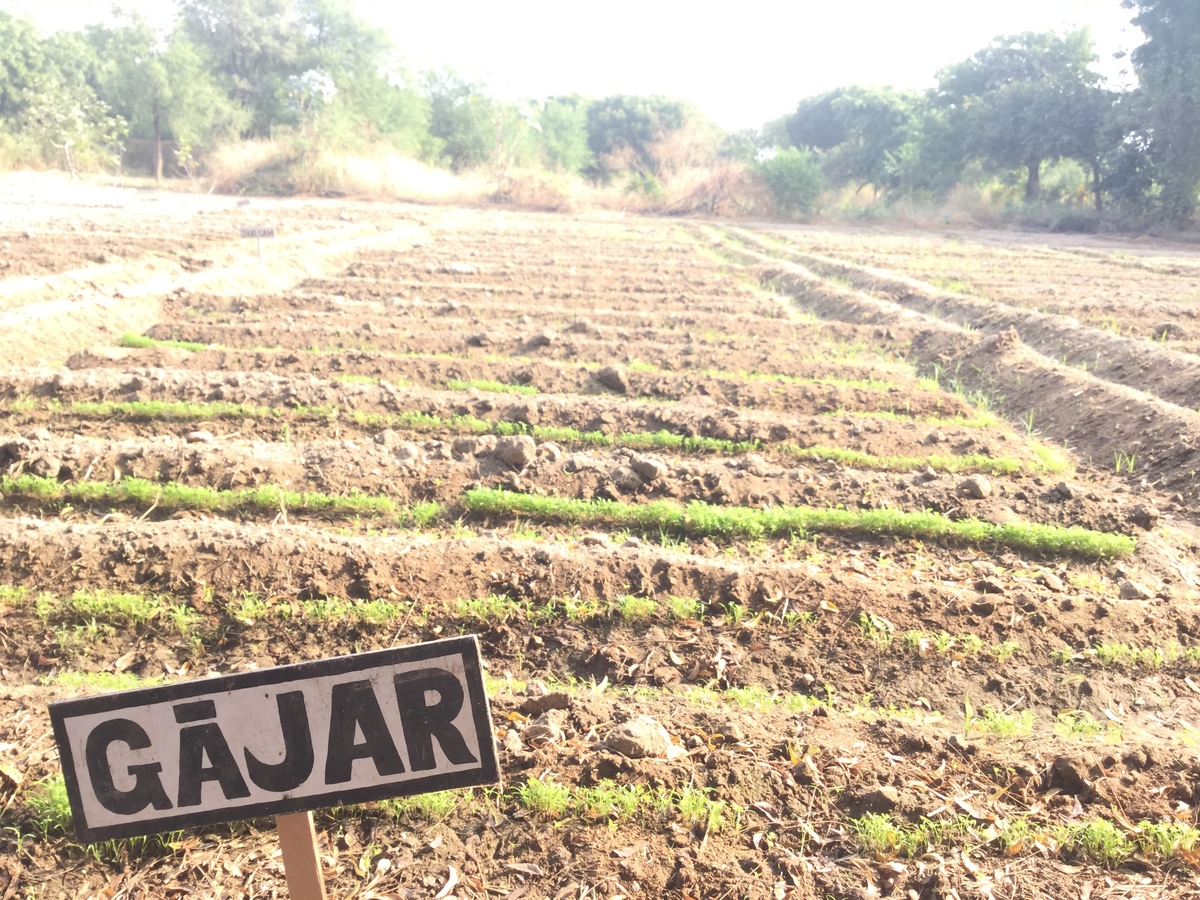 Some of the things that we grow during the winter. Tiny carrots, up and out.

I am looking forward to celebrating a warm and festive time in December with many bhaktas. Maybe we can fire up the pizza oven with some of the dry wood from the neem trees…