December this year was a stunningly sunny and bright month and the night and early morning temperatures were not too low.

Only a couple of times did I see my breath's mist during the dawn, and once while flooding the carrots and beetroots from our main tube well, steam rose off the soil as the temperature of the water was so much warmer than the cold soil. It was a beautiful sight to see.

The talab water on the other hand is icy when pumped out. This month the pump (7.5 hp) was removed from the talab and serviced, as it was rusty and needed some tender loving care. It was temporarily replaced with a 10 hp monster, which enabled us to run 3 sprinkler lines at the same time (about 24 outlets) and flood irrigation was twice as fast!

There were a few days when the temperature was above 30 celcius and since all of the surrounding neem trees have had severe manicures, the sun at times felt very bright and hot. 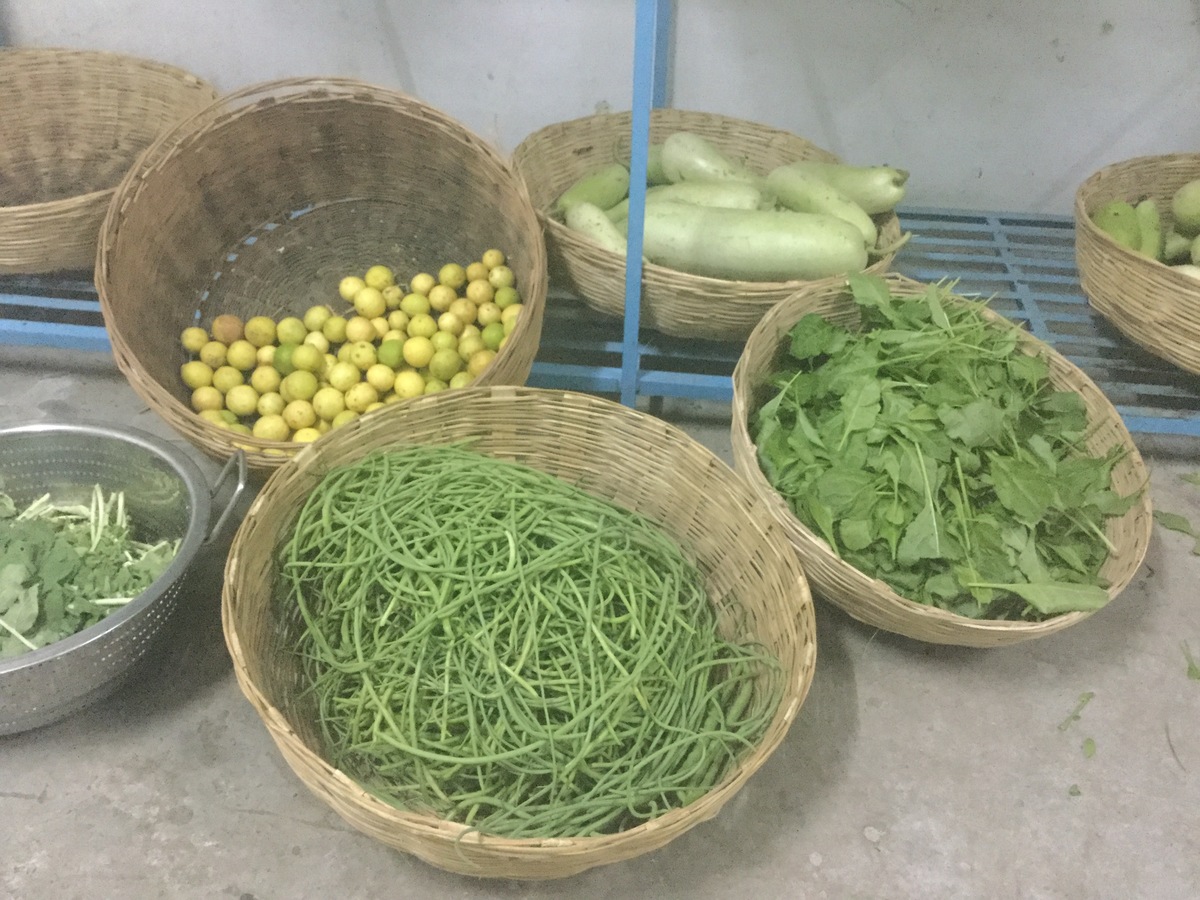 This month our lemon trees started to blossom and the last few lemons were collected. The upper orchard received some under ground water, which has been pumped out of the foundation of the Om Conference Centre for the last few weeks via a new channel, and this gave relief to the trees that had not had a drink since the end of August. The whole area was cleared of monsoon weeds and fodder grasses and now it looks less like a jungle and more like a forest, but there is a lot of undercutting to do over the winter months and this started on the 31st. On this day we also started to fertilise some of our lemon trees with powdery cow dung. 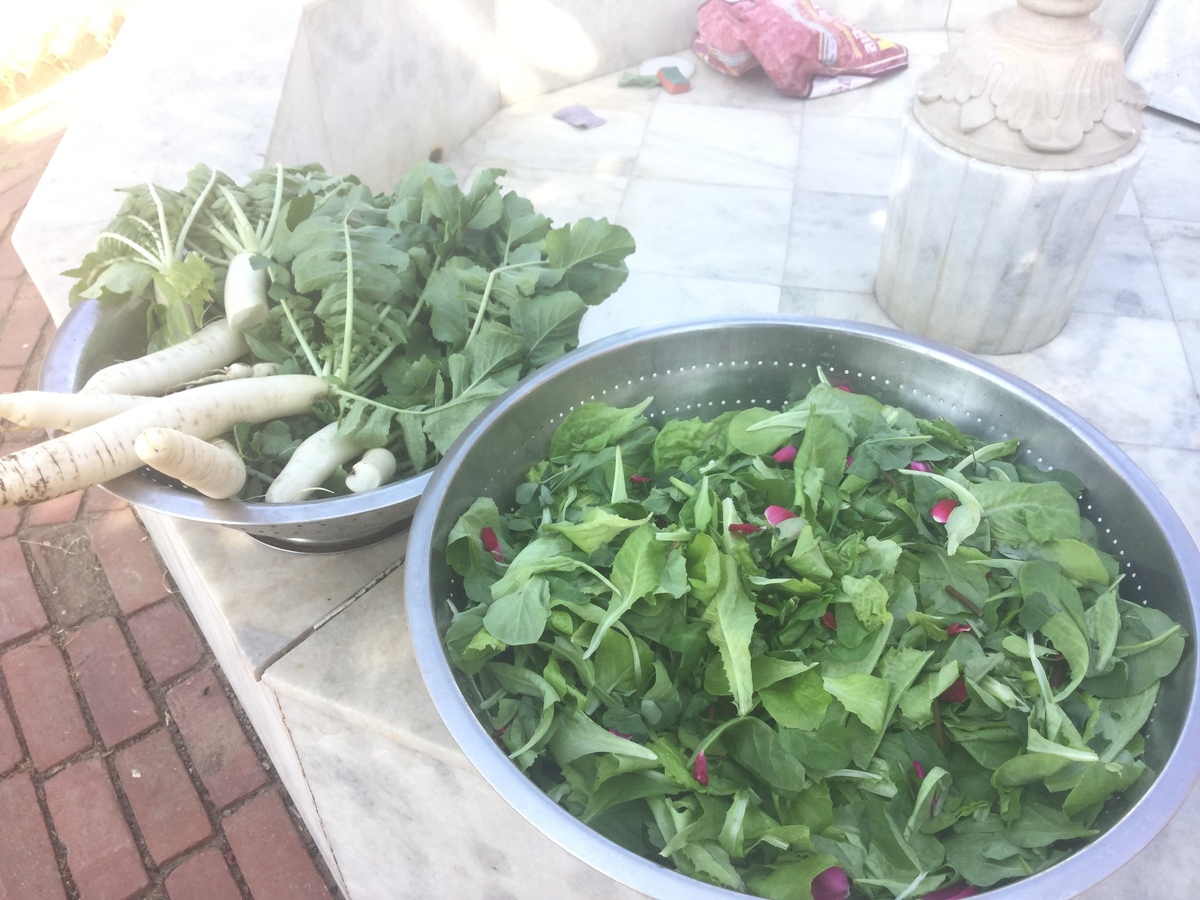 A selection of our winter vegetables

In the Madhuvaani garden area, near the workshop, the roses were pruned and the area weeded. The salad and brassica areas produced a total of 200kg of produce this month and we are still harvesting lauki and pumpkin (95kg) from the monsoon field in the Big Garden and there has been plenty of methi, spinach, coriander and mustard leaves. Carrots and beetroot will start in January and the beetroot and spinach/coriander areas were weeded this month, as well as the salad area.

In the Shiv Bagh, the weeding of the central part continued and we also cleared all of the Bermuda grass from around the rose lines and the pruning of these has also started – slowly but surely. The Golden Hedge was cut at least half a metre in some places with the chain saw – and this removed a lot of dead wood and then all of the old beds were weeded and the doras repaired. 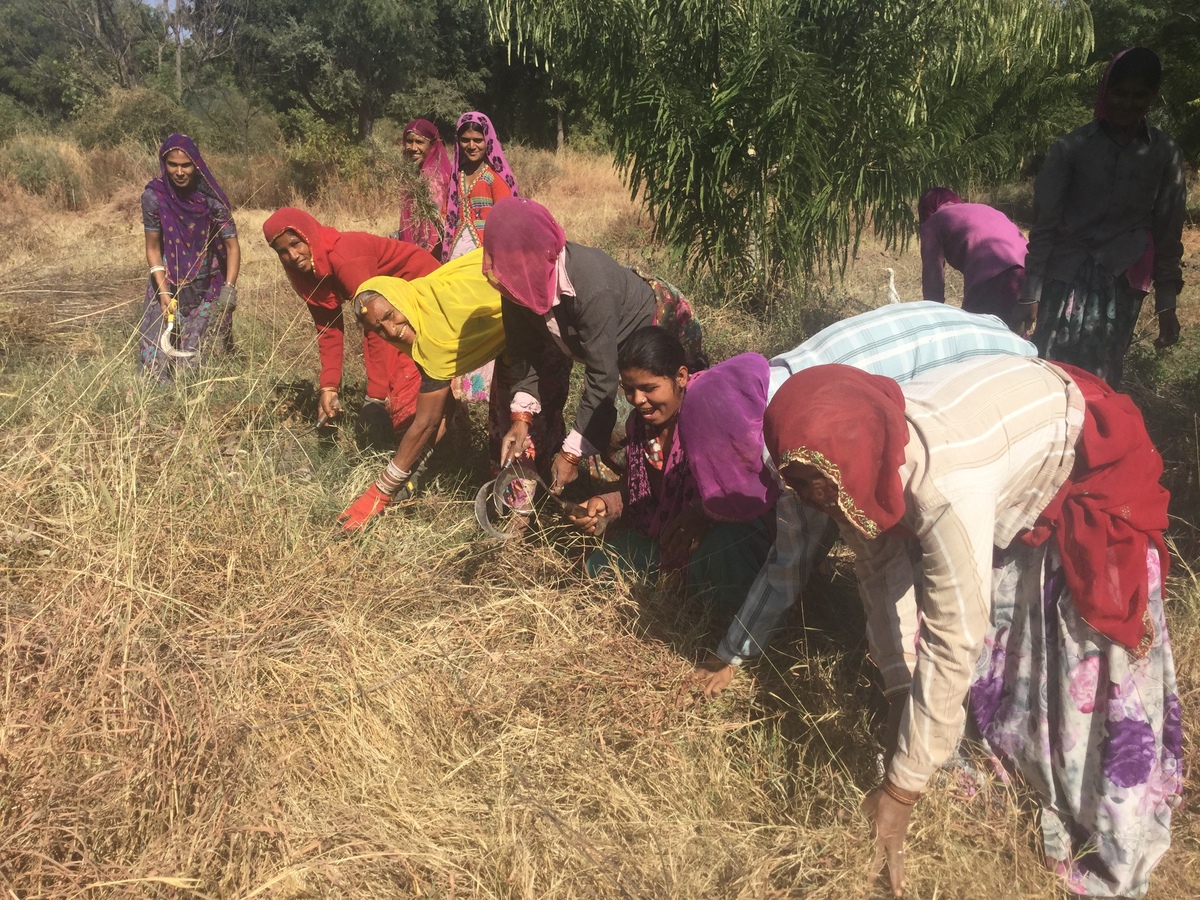 The Organic Store also had a complete makeover and there is some nice new stock and some freshly packed ashram produce, such as roselle petals and dried rose petals and curry leaves. It has expanded a little bit more, thanks to all of the support from the visiting bhaktas this year – many many thanks and also for all of the salad, tomato, flower and herb seeds.

Thank you also to Poornima from Hungary who is studying Ayurveda science at the Gujarat Ayurved University in Jamnagar, which was established in 1965. Every time she visits us she comes laden with different herb and tree seeds that she has collected and lovingly labelled. She always carries some cuttings as well, the most fascinating of which is hadjod (Cissus quandrangularis) which is a climbing vine that is an essential remedy for fractures and osteoporosis. She has promised us some avocado seedlings this year which some of her fellow students will bring from Ghana.

In some seedling trays we have managed to germinate some lavender seeds and now there are some very tiny plants coming – even a 1mm baby produces the most beautiful fragrance.

During the winter months of January and February we try to do as much of the necessary work in the huge Big Garden area as we can. I have 3 helpers for the winter and for the foreseeable future, but if anyone would like to come and join the team while the weather is clement, then you are most welcome! You can help us eat through many many kilos of winter produce!

During December the workshop boys and Gyanpuriji from Slovenia made a wire fence around our cultivated areas in the Big Garden and so now the horses can enjoy grazing there in an enclosed area, otherwise they will continuously run towards the wheat now that they have discovered it! In the past we have buried wooden posts vertically and then wired bamboo between these horizontally and it is very time consuming and after some time the posts get eaten below the ground by termites even if we paint neem oil or old motor oil on the base of each post. This is a simpler solution and can also be fortified using thorny branches from trees – e.g. lemon trees – which adds an extra buffer against horse invasion. 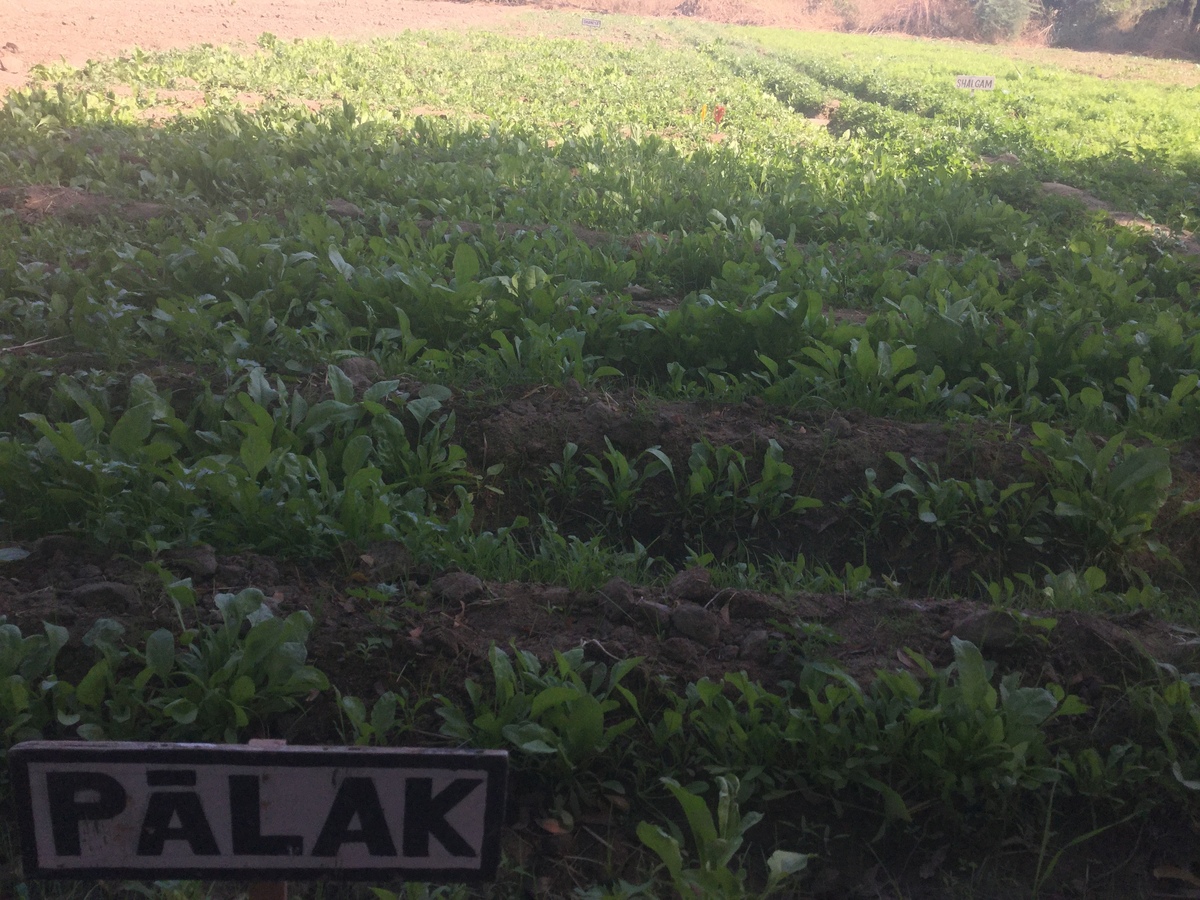 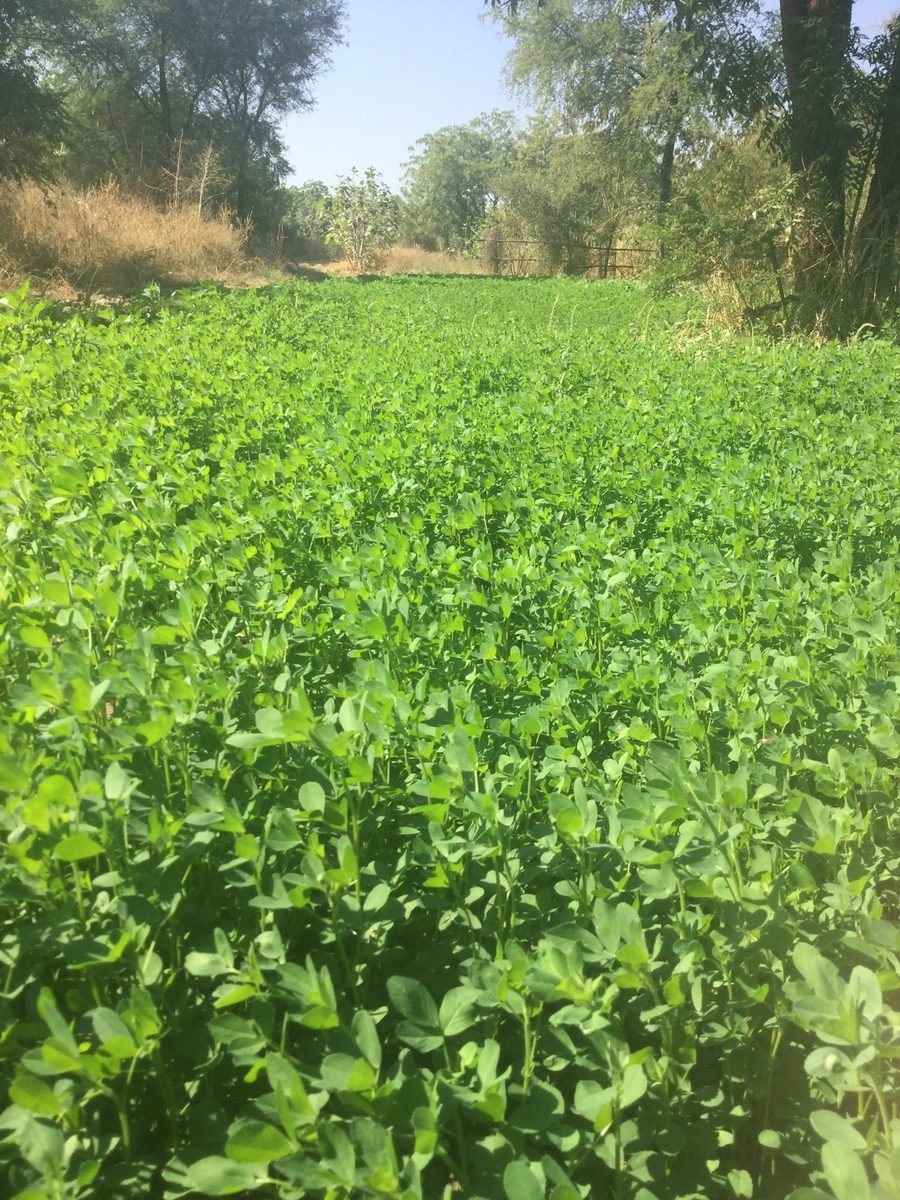 Towards the end of the month a bhakta from Sojat City – a town 20km east of here – brought a small cutting from a vine or climber called gudmar (Gymnema sylvestre) and we shall try to cultivate it here. It is a very effective medicine for lowering blood sugar. Gud means sugar (jaggery) and mar means 'to destroy', or in this case 'to block' because when a few leaves are chewed the sweet taste buds in the mouth stop functioning for a while and so one can no longer taste sweet. This plant also helps to support healthy pancreas functions. In Sanskrit the plant is known as Shardunika. It is an ideal tonic for the management of diabetes.

The daikon radish (mooli) and the radish beans (mogri) were showing early signs of mola infestation by mid month and even some of the Pak Choy had some on their leaves. Mola is the local name for aphids, which are basically plant lice that suck the sap out of a plant. Rather than trying to control these with a bio-spray, we generally accept that by the Makar Sankranti constellation on the 14th of January, the Brassica family of plants has completed its life cycle for the season and we remove the plants. Mooli or daikon radish is not consumed locally after this festival.

I wish you happy mountain skiing if you enjoy the snows and otherwise stay warm and safe during the icy weather.

Happy New Year and the best of everything for 2018.