Up until the 20th we were still battling on with hot weather irrigation, and then after that the rains came, and so did Swamiji - and cooler weather for a while...

By the end of the month the dry summer heat was a distant memory – and 95% humidity a present reality! There was also some heavy rain on the night of the 9th, so this was one of the wettest Junes that I can remember and the last week was focused on getting our fields ploughed and planted before the soil became too saturated. 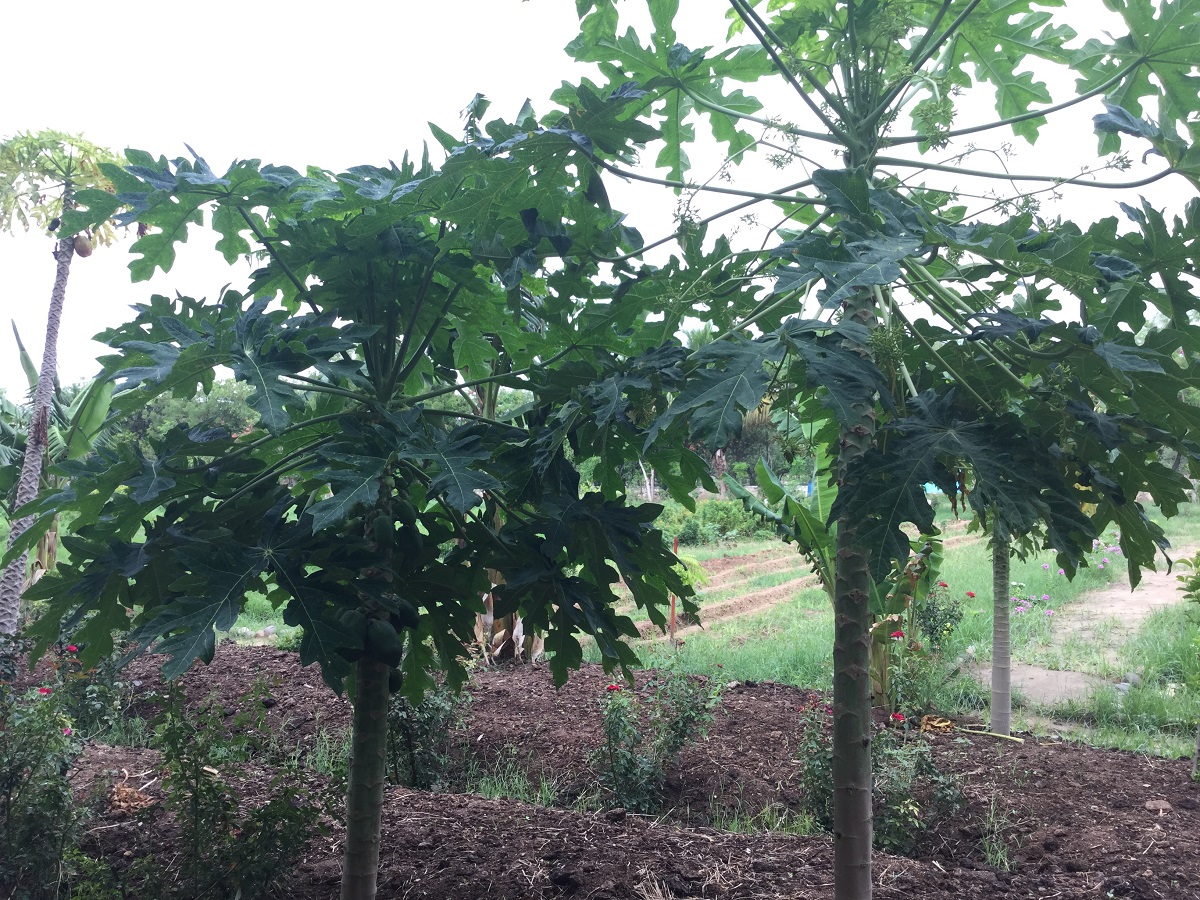 We harvested a bumper crop of bottle gourd (lauki) this month – more than 150kg – and so were able to sell the surplus and send some to our other ashrams. This gourd can be grown throughout the year and its juice is known to be effective in the treatment of diabetes. It is diuretic in nature and helps to flush out excess water content from the body. It is also cooling and rehydrates the body.

The monsoon is the perfect season to try these juices and to find out what can make them palatable – such as adding a few mint leaves and some salt and pepper, or blending up aloe vera gel with some lemon juice and honey. Maybe we shall set up a Jadan Juice Bar for the coming group and create our very own organic green smoothies. If anyone is interested to help out with this during your visit, then please let me know. 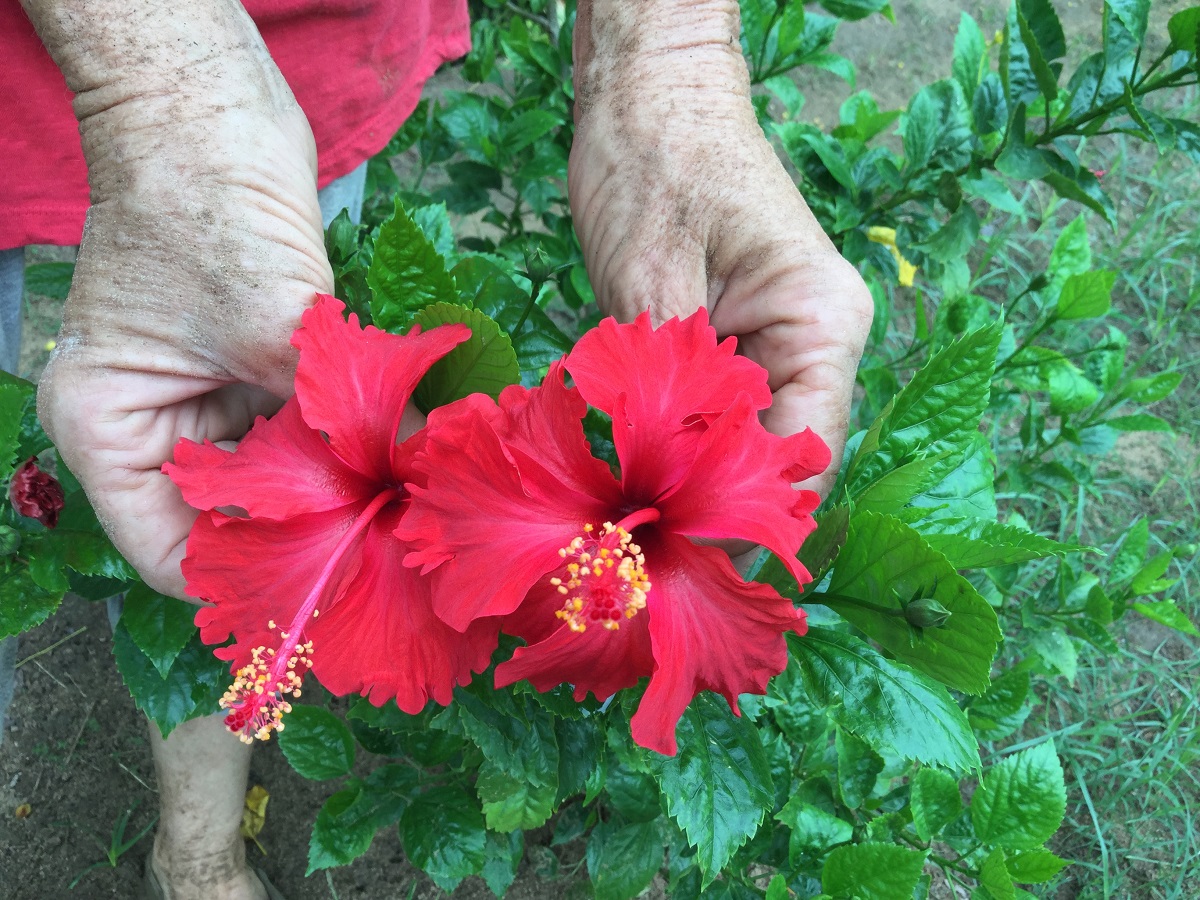 In the meantime, our Shiv Bagh mulching programme continued and the pathway was completed. More gobar was used to cover areas of heavy weed. It will take until the end of the year – another 6 months – until we complete this project, but in the meantime the garden is becoming more and more beautiful, and now after just a few good rains it is shining and blooming.

On the 30th, the first to east to west cowpea rows, which we planted on the 24th, were starting to germinate, and we planted another 3 channels. We need to have extra because Kashap our tortoise, who has been out of hibernation now for 2 weeks, enjoys this leguminous plant very very much! 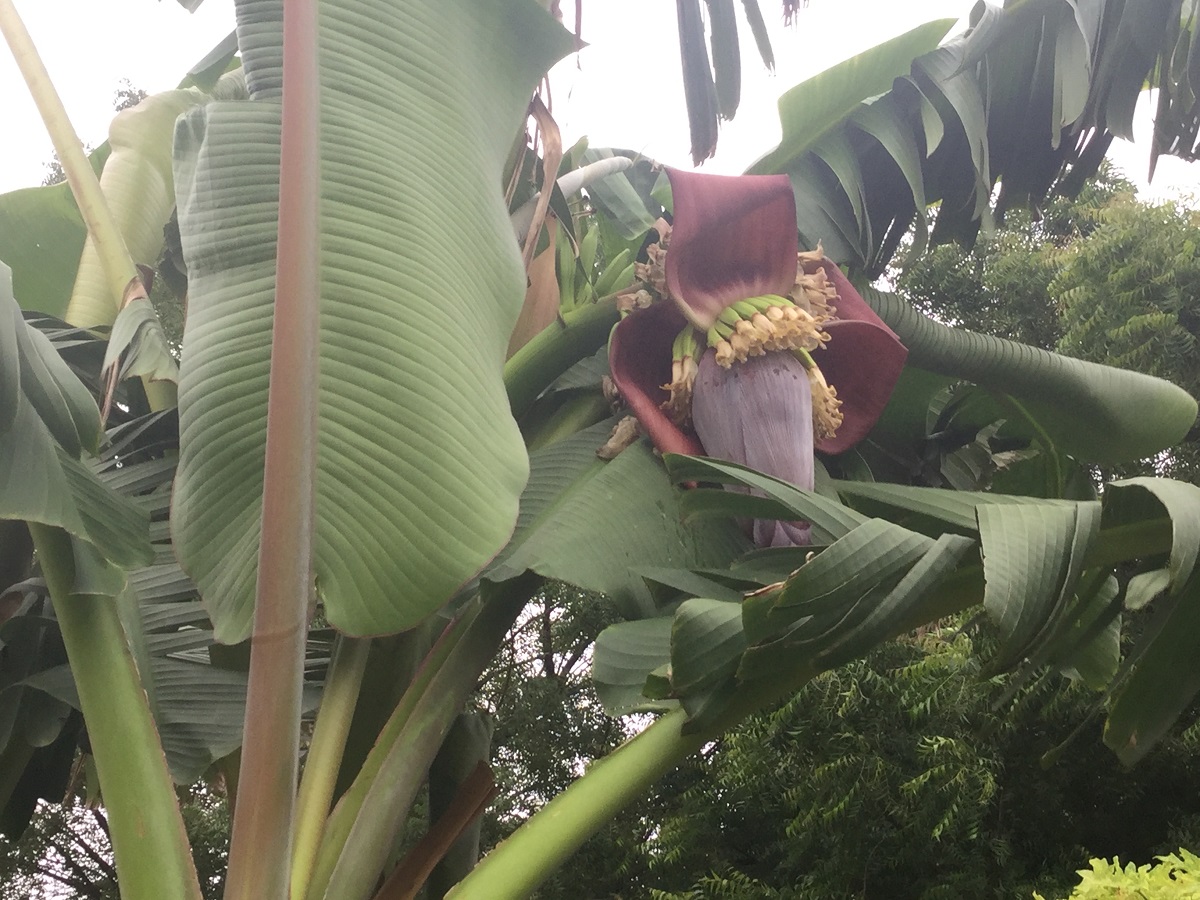 After the bananas are ripe the flower may be cooked as a vegetable.

During the monsoon season, in addition to vegetables like bhindi (okra),cluster beans, torai (luffa/loofah) and pumpkins, we grow many varieties of legumes (daal) – moong and chawla (cowpea), and also red, brown, white and burgundy pulses, all of which have been brought from Europe, so that we can see which varieties work the best in this microclimate.

Then there is corn, which this year as last, we broadcast behind the central office, along with some snap melon and cucumber. We always put something here because there are no nuisance grasses in this area, and the horses spend their summer nights here, so the soil is nicely treated with equine urea. 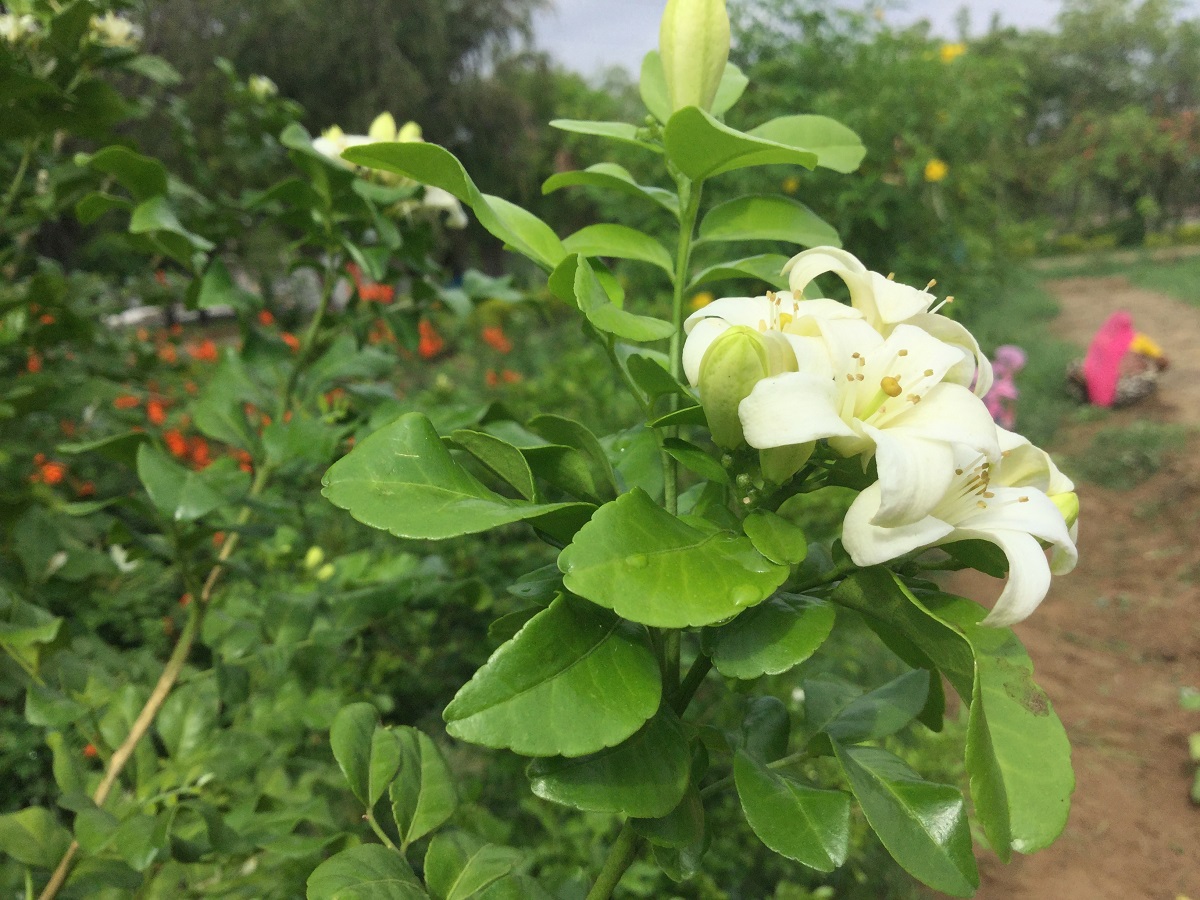 In the Big Garden this month, jowar cutting started and several trolley loads were sent off to cows that had not tasted green fodder for some months. The harvest will continue throughout July and then this hardy sorghum will again grow and be cut for the second time in October.

The vegetable patch there is now thriving and will probably continue throughout the monsoon. To date it has been weeded twice. In another part near the gobar gas slurry storage area, where we had sweet potatoes last year, we sowed bhindi and kakdi, as well as some deshi pumpkins and lauki.

The rest of the sandy soil area has been ploughed, and in a small area some luffa (torai) has germinated from last year’s seed.

Our garden team cleaned up the moringa area and pruned a section of the kumtiya boundary line during the last part of the month. The fig trees in this area are all fruiting, though the figs are not as big as they were last year.

The lemon orchards should start to produce something within the next month, as the branches are laden with small green fruits which usually start to get yellow towards the end of July. And the talab is already nearly 5 metres full, as the rain started to flow into it as early as the 24th of June. 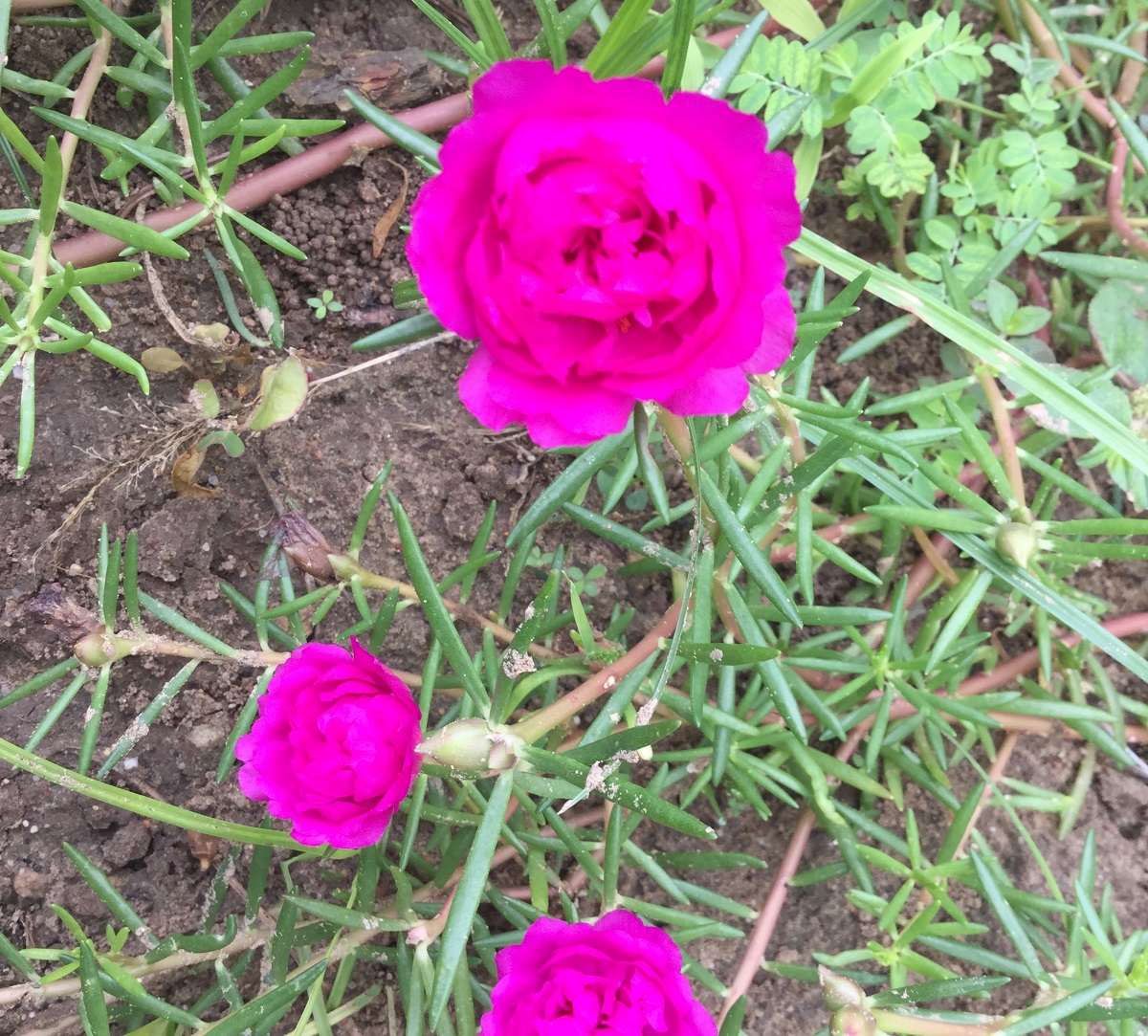 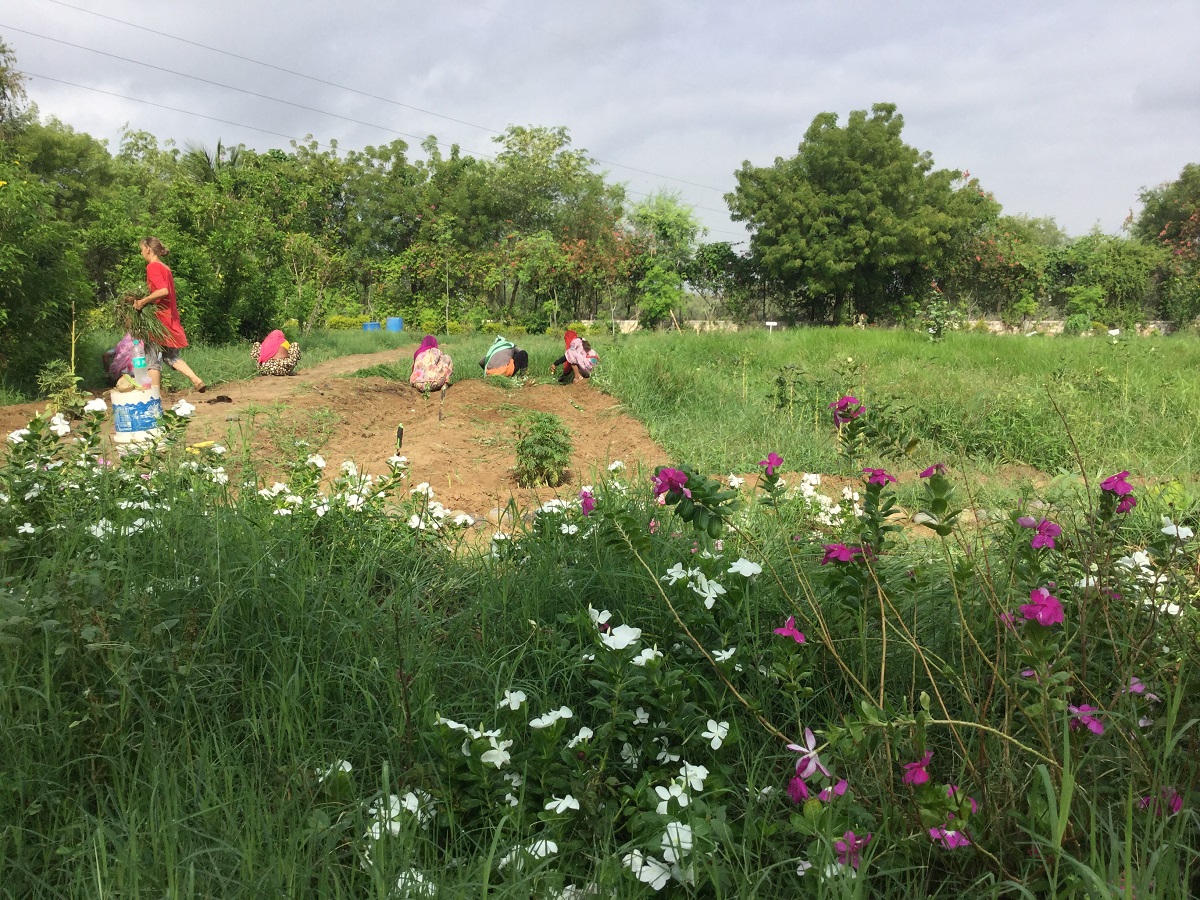 Portulaca; taming the jungle on the last day of the month

The organic store has been restocked and there are many fresh and interesting items. We shall be having a few weeding programmes in the Shiv Bagh so you're welcome to bring your gardening clothes with you as it is very damp and sweaty weather now, but also cool when there is cloud cover and a good chance to sweat out those toxins!

The satellite photos so far seem to indicate a very wet July and not much rain in August and September. There are also many Jyotish predictions available online, which have a more holistic viewpoint.

I look forward to seeing many of you for Guru Poornima and the beginning of Shravan maas from the 10th of July, and to share with you the bountiful season which is the monsoon period of this area, in its full glory.

Swimming during this period is strictly prohibited because the rain water is moving along the ground and contains some harmful bacteria, but you can take a rain bath and that is something great, especially after a hot morning in the garden.