The temperature and gentle climate of February and March in the semi-arid zone of Pali District has slowly come to an end and the mercury has climbed to 40 degrees celsius and even beyond.

A terrible heat wave has been forecast for the next few days and so now our summer vegetables are able to survive and display their incredible capacity to create flowers and fruits in the intense heat of early summer.

The Holi Festival in all its colour and celebration took place on the full moon (1st) of this month and we celebrated the second purnima of this month (31st) with some carrot halva. A week after Holi comes a special day on the ashtmi and this is devoted to the worship of Shitala Mata who is a divine being who protects her children from all fevers and hot and itchy skin diseases. 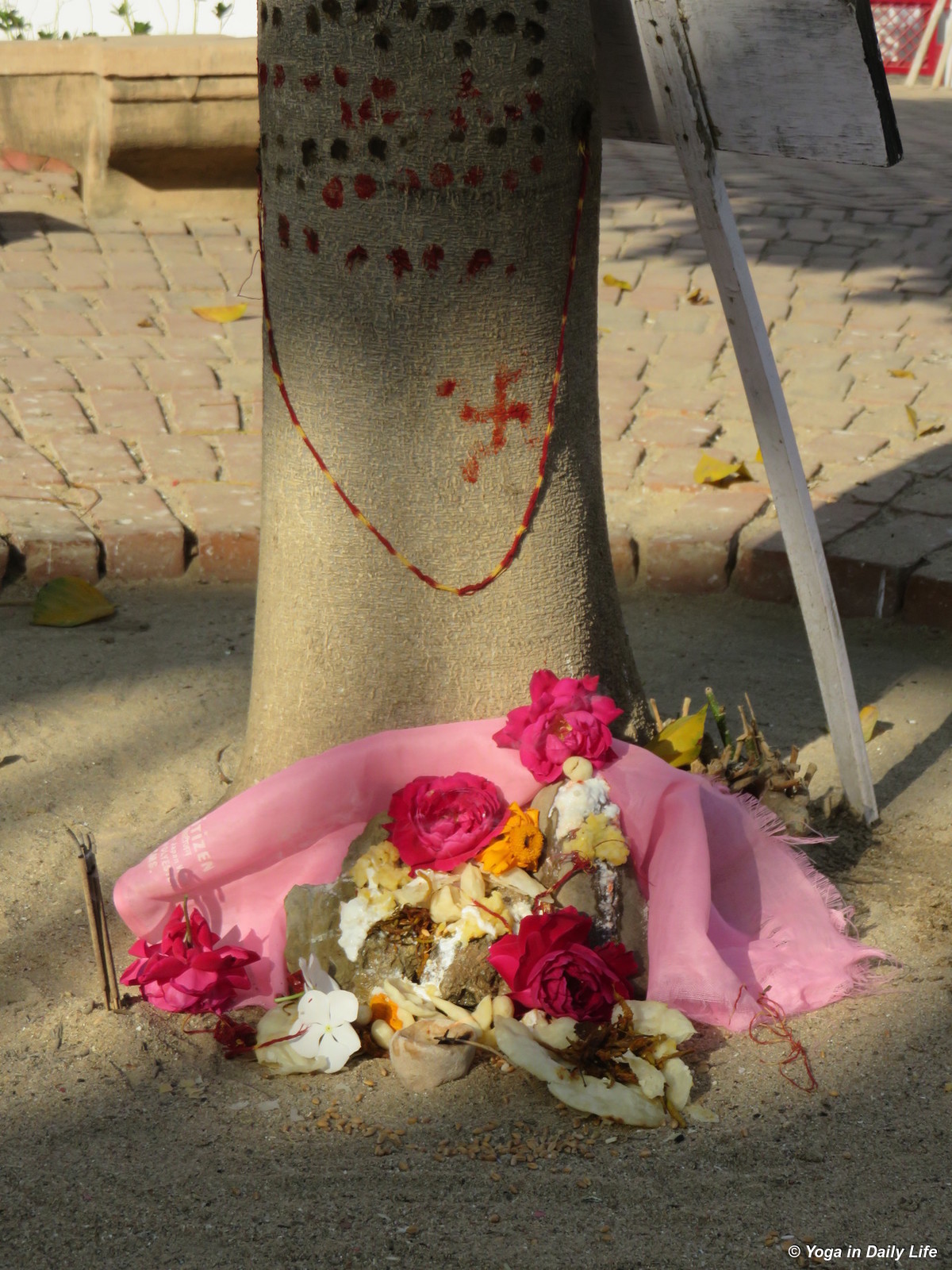 We worship her each year beneath the karanj tree in our kitchen area when Janaki offers Her sweet and salty puris and chips, and polenta which has been cooked the previous day. Normally in this culture, such food is regarded as impure, but on this day the goddess is appeased because her children understand that if they do not use fire on this one day of the year then She will protect them against smallpox, shingles, urticaria and heat rashes during the coming year.

From the 20th, our combine harvester was active in the wheat and barley fields and a good amount was collected – nearly 5 tons of wheat has already been packed into 70kg sacks and stored in our miraculous cool room. A team of ladies from Sojat City – full of joy and good energy – worked through a huge golden mountain which will supply our ashrams in porridge and chapattis for the coming seasons. 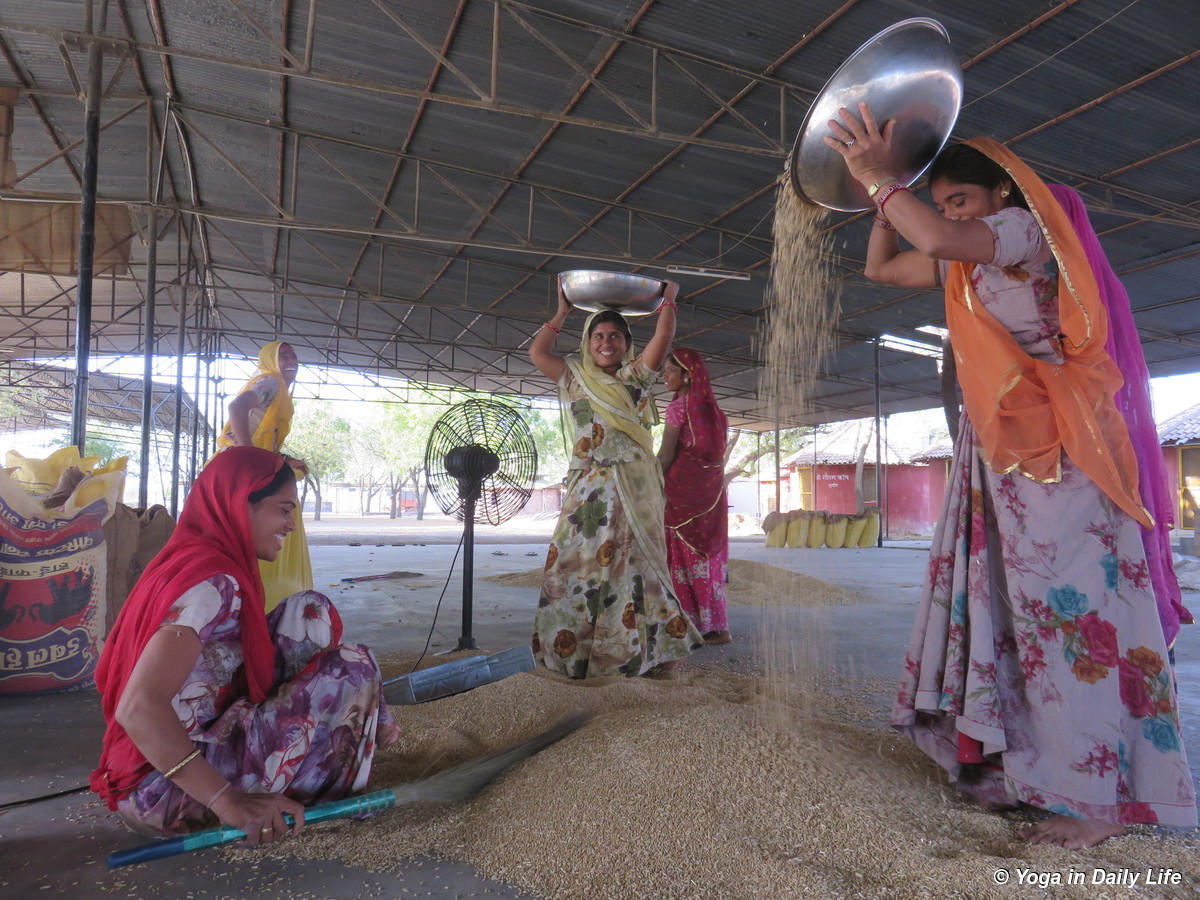 On Sunday mornings, we have been harvesting our winter carrots and now this action needs to take place at first light – on the 29th our team at the Om Ashram construction site measured a maximum temperature of 44.8 degrees Celsius, which must be one of the hottest days in March ever recorded! The 30th and 31st were also sweltering and above 43 degrees – the sun was burning from as early as 9am and there are signs of the loo (hot winds) approaching – a contrast to the soft and cooling winds from the north and south just a few days ago.

In our workshop garden, the bhindi plants are developing a little slowly, and so each day we are bringing some nice compost from the fertile centre of the Shiv Bagh and spreading over each and every bed taking care to remove any of the dreaded nut sedge bulbs!

In the Big Garden, the cucumbers – planted on the 4th – are growing well, and the area only takes about 20 minutes to water; the soil is very fertile and does not dry out too quickly. The nut sedge is a bit heavy here, the first round of weeding has almost been completed.

After the harvest of our fenugreek and linseed in the Shiv Bagh, we weeded and dug the area where the latter was growing and have replanted it with a variety of seeds including guar phali (beans), zucchini, some more chandaliya and some tindi (apple gourd) This area is now under sprinkler irrigation again. 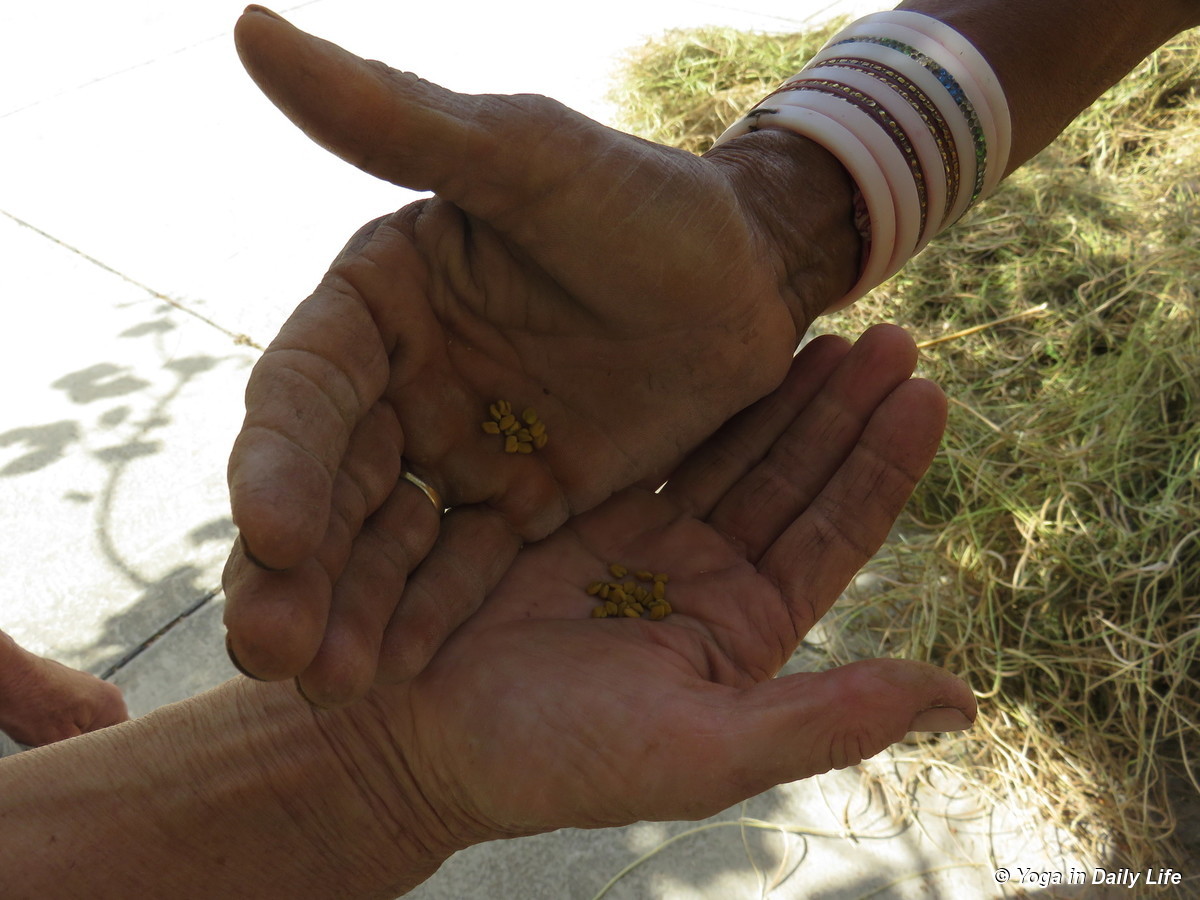 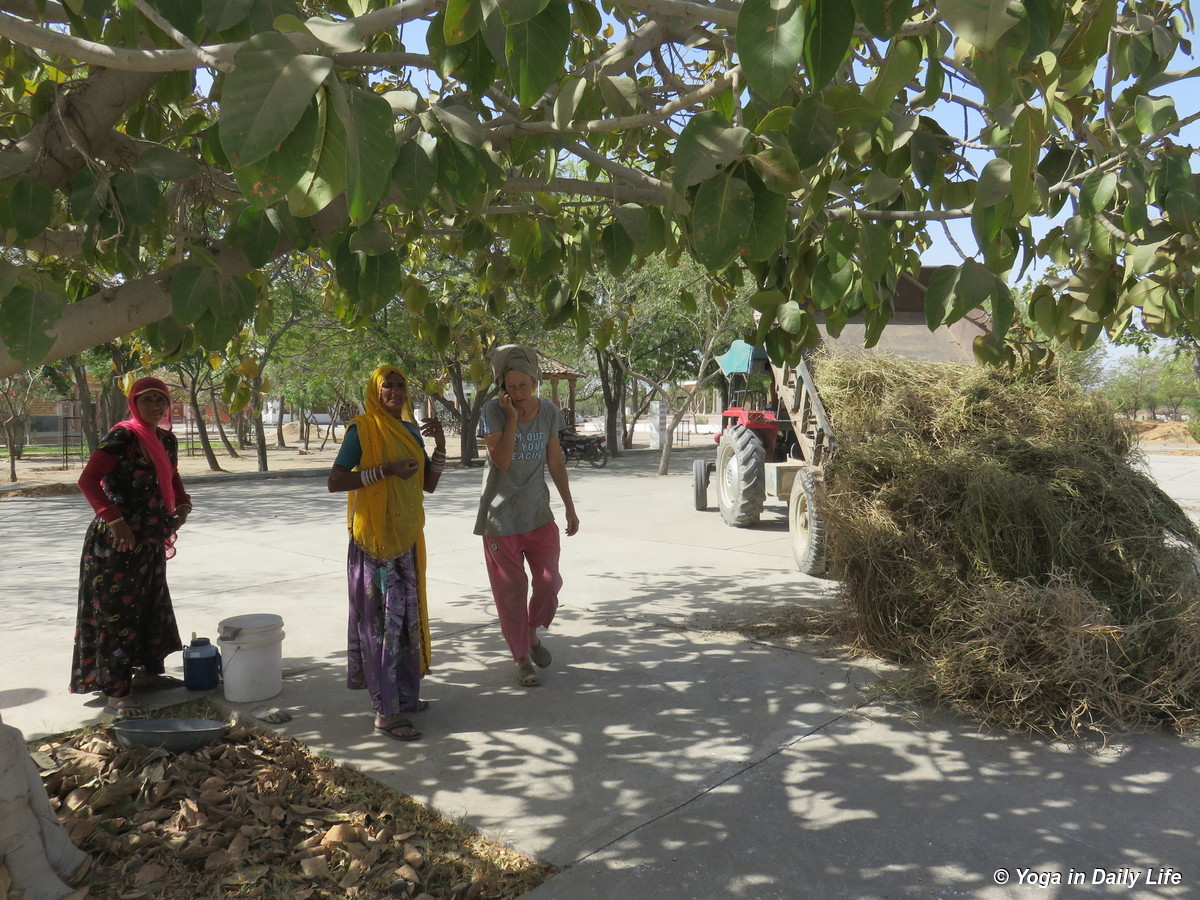 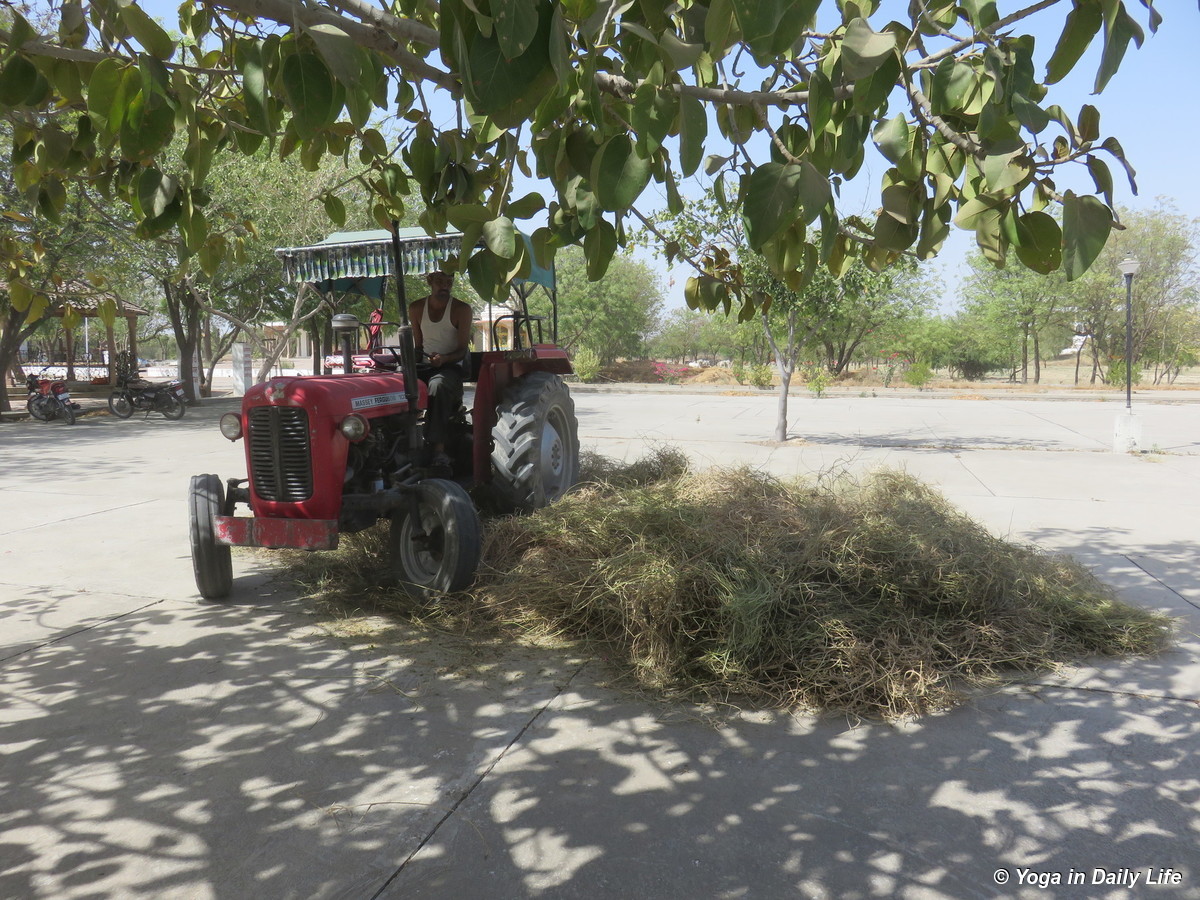 Due to the intense heat of the last few days of March, we shall have another big effort early on the first Sunday (1st) of April (not a prank but for real!) and try and get another 30 to 40kg out, including garlic, which may start to cook in these temperatures. Sweet cherry and other varieties of tomatoes ripened this month and so our salads have turned from green to red, as most of our lettuce varieties have gone to seed, except for a chicory variety known as radic in Slovenian, and even that is pretty bitter and chewy. A few healthy tomato plants also self-seeded in the Shiv Bagh and ironically these are larger and healthier than the ones that we planted back in early December.

The big pile of neem giloy stems finally got cut this month, over a 2 week period, thanks to post breakfast help from many of the karma yogis. It has been thoroughly washed and, after drying, will be ground to a fine powder and made available in our Organic Store. Parsley leaves were also processed and packed this month, and there are now a lot of seeds to collect and clean, including ajwain and fennel.

Most of the sunflowers have been removed now and used for mulch in the Shiv Bagh – the parrots enjoyed their annual feast and now many new yellow and orange marigolds have bloomed and the hollyhock plants are growing taller and taller and at present the area is full of stunning blooms – the rose bushes are covered with flowers as well, having had their winter sleep.

The last day of the month was not only (Chaitra) purnima but also Hanuman Jayanti – birthday of the greatest devotee of Lord/God Rama.
On this evening, we cooked a thick and large roti with jaggery (gur sugar) and some sesame oil, and this was offered in our Hanumanji mandir. Special hymns and prayers were then sung from Tulsidas’s Ramcharitmanas (Sundar Kand), which was composed in the 16th century, as well as various Hamumanji Aartis (prayers) and the Hanuman Chalisa. We remember His loyalty to Lord Rama and to Mother Sita, and His strength and wisdom and most of all His capacity as a great karma yogi who navigated the great ocean between southern India and Sri Lanka with stones blessed with the name of his Guruji. The Sundar Kand narrates His epic flight through the air, which took Him for the first time to Lanka and where He met Mother Sita for the first time. On this day, all over Rajasthan and other parts of this great land, these verses will be sung and re-eneacted in Holy Dramas or nataks.

Greetings to all from the Holy Dust of this Divine Land, where every day somewhere is a festival or the birthday celebration of a Holy Incarnation or saint. Sunday 1st of April is also the celebration of Easter or "Eastern" – I hope that you have the good fortune to be with Gurudev on this Holy Occasion too!