As has been the norm for the past 2 years we again faced hard challenges this month. Expectations from the cucurbits replanted in March were again thwarted by poor seedling development and again we decided - as with last year – to do a final replanting with toru and even some of these seeds failed leaving us with no option but to close 5 of our prepared lines. On the bright side we harvested 118kg of tomatoes this month - although the plantation near the eating verandah stopped producing mid-month and was then cleaned and ploughed – and some of this total came from the big field where we used some Pali water to liven up the plants which responded well. At the end of the month we still had the 2 beds which were transplanted into the winter area. Some of these were quite big – the fruits that is – but were still not ripening as quickly as those on the other side.
The bhindi slowly started this month and by the end of the month we were harvesting around 10kg per week. They are very good quality and any plants showing signs of disease – yellowing leaves – were removed. The toru in the long beds also started and some of the bigger replanted toru plants were looking very good by the end of the month.
Chandaliya was cut twice per week and all are very much enjoying this leafy green vegetable. 76kg was cut this month. The cows also enjoy the stems which are removed by hand. The winter mangold provided us with another 4kg this month and was then removed and the field was ploughed. Finally baigan came in 3rd at 73kg and during the last week of the month our kitchen decided to start preparing it in a European way – baked in the oven with tomatoes and onions and basil.
The lauki is struggling on the raised bed which may be most suitable to the monsoon climate and the pumpkins were looking excellent – large-leaved and flowering – on the keyhole garden which we water twice per week. It is yet to be seen whether or not they produce gourds this season.
We have tried some replanting of curcurbits like tarkakri and kheera kakri opposite the workshop where it is moist with rainy water from the sprinklers and also have tried some of these seeds to the east side of the Shiv Bagh. It is so hard to get good quality seeds of these types these days and such a shame as in the past we used to harvest huge surpluses of Armenian cucumbers – tarkakri and snap melons – phrut kakri. We even transplanted 40 of the kheera kakri plants that came up from the expensive seeds sold to us by the KVK but the roots were poorly developed and they did not survive. Some plants of kheera kakri to the north of the summer garden look very well developed and have flowers but their fruit is small and though sometimes sweet it looks sickly. What to do. We tried!
Weeding has not been a huge drama this month. We employed an extra 2 ladies for one day only and managed the rest ourselves. If we do one line daily we can keep it under control and it helps that 4 and a half lines have been abandoned. 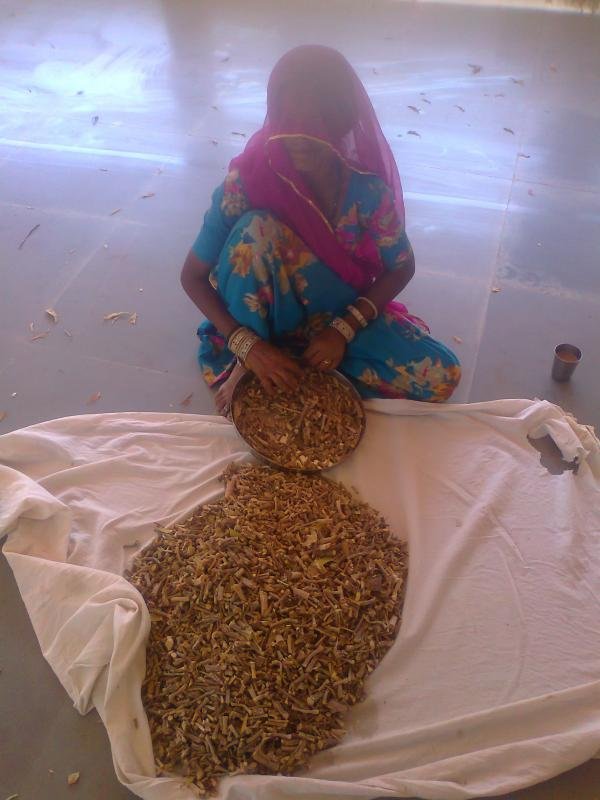 There were many piles of different seeds to be cleaning this month and our one remaining lady in the garden managed to clean most of these this month including the dill weed from which came about 10kg of seed and the oats providing us with a good amount of seed for next season. Some basil and isabgol seeds were also cleaned. There still remain a lot of castor seeds which can be done en masse using a stick. They are not so easy to do by hand because the outer coatings are slightly thorny.

Horse and Cow fodder going off!

At the very least our lucerne and sorghum wheat are growing rapidly and get watered every 5-7 days. The Napier grass has also expanded a lot and no doubt now that its roots are fully developed it will start to grow tall. The alfalfa/rajka/lucerne is cut daily for the cows and horses and we expect cutting of jowar to start in early May.

In spite of a beautiful rainy evening and night on the 19th/20th, it was a hot month. Herbs such as basil and mint would dry in the shade within 24 hours. The temperature ranged from 38 degrees celsius to 42 degrees and so it was important to get all the necessary irrigation finished by 8am and after 6pm in the evening.

We spend some days this month when time allowed in removing the tree litter from the channels which blocks the flow of water during flood irrigation. This was completely by the end of the month. We lost another coconut tree to termites and pruned some of the plants and removed deadwood and obstructing branches. One boy was employed from the 23rd and he is helping with the weeding and cleaning of this area as well as removing the tree litter behind the white house which has again piled up this month since the last time it was cleaned.

Our dear Swami Niranjanpuriji took it upon himself to organize the karma yogis into a weekly working bee on Tuesday evenings after satsang to empty the dry gobar slurry from our gobar gas plant into a big trolley. We had 3 fun-filled episodes of this action this month and the gobar is being taken to our ex-winter area in preparation for our monsoon vegetables and a small chilli plantation.

There are 6 different seasons in India and we are now in the hot time – grishma – when young trees can easily dehydrate and die. Therefore during this season we keep a strict calendar and ensure that we do not forget to irrigate each area. For example our 140 acid limes which are full of fruit and will produce a lot in July need a drink each week. Our tree nursery mostly gets soaked by sprinklers but also needs some hand watering with plastic watering cans and more mature trees may alone need a drink every 15 days and these are irrigated by water tanker. Our anjeers, papayas and bananas have survived well since being purchase last year and most of the fig(anjeer) saplings hold fruit. Some are already more than a metre tall.

So to conclude for this month – we are providing 4 sabjis to the kitchen and there was some gunda from our trees opposite the workshop and behind the sant kutiya which were sundried and also eaten with green mangoes. Most of the work was watering and weeding done by Puspa with the help of Tulsi from Hungary who also helped with weeding and harvesting. We have only one Indian helper at present as requested by Swamiji and they are helping with maintenance of the Shiv Bagh, weeding of vegetables and hand irrigation of around 150 young trees as well as necessary pruning and some heavier work when needed.

In service of Gurudev.