Vegetable news for February 2013. It is getting hot! 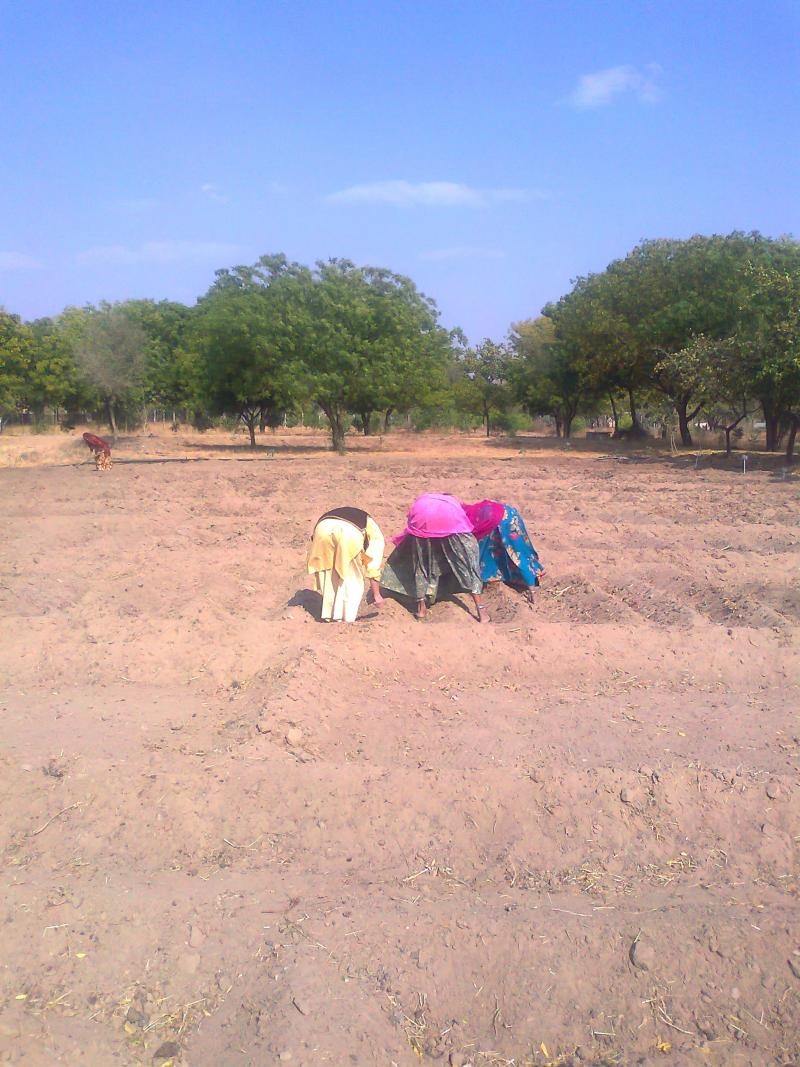 In spite of the fact that we had no winter group this season except for 60 or so people towards the end of the month, we managed to consume most of our winter crop by the end of the month and so we will not have to worry about beets becoming woody or onions going to seed. The last of the beets were pulled up on the 6th. The valolia vines (lablab beans) were removed from opposite the workshop during the first week of the month because they were infested by mola (aphids)- the seasonal bug that appears on mooli and mustard during the middle of January. This freed up some space opposite the workshop and we began to transplant some of the largest of the Australian custard apple trees – 20 in total. The area – it is hoped – will slowly be transformed into an orchard with a few perennial ornamentals, some ayurvedic and garden herbs and some flowers.

Over the fence the tomatoes really started to take off and we flooded the beds 4 times this month. Prakashji from Russia/Vienna regularly dug over the beds with the copper hoe and perhaps this action helped with the growth. Aphids appeared on the plants at the beginning of the month and so we sprayed with our homemade bio-spray each week to keep these at bay.

In the larger area the baigans started to produce more which is common as they are fairly dormant during the winter months and we continued to harvest green onions, silverbeet and Indian spinach, carrots – a wonderfully sweet variety – and our butter salad – the third of the four beds being emptied on the 13th. We still had half a bed left of the curly lettuce by mid-month and we used this for  Swamiji and our 80 guests  when they came to Jadan between the 20th and the 28th. There were still quite a few large red endive lettuces near the workshop too but no moolis! 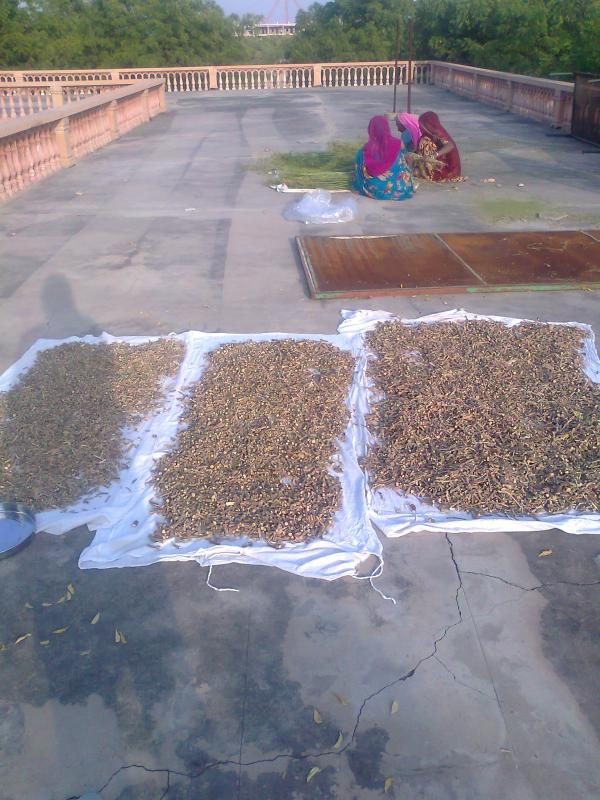 Our spring planting started with a pooja on the 15th which was Basant Pachami and the beginning of the spring season. It is said that green leafy vegetables grow best when planted during this phase of the moon and so we put in our Amaranth – locally known as chandaliya – seeds on this day in the line directly next to the potatoes. The next planting took place on the 25th – the full moon and we put in our bhindi seeds, karela, toru,pumpkins and also some tindi, tarkakri, musk melons or kharboojas and keera or Lebanese cucumbers. Also some lauki in our new raised beds and some guar phali at the shady end of the prepared area. The ladies had prepared the field a little at a time during the month following the ploughing, broadcasting of marigold seeds over the whole area, leveling and furrow ploughing. The final line was completing as sowing was going on during the morning of the 25th.

The day after the first planting rain came and the weather cooled for a few days so -perhaps it was fortuitous that the seeds arrived late. From Gajendra seeds we brought tarkakri, phoot kakri and kharbooja as well as guar phali and KVK brought us some pods of a good bhindi variety and some lauki seeds which they gave for free and we brought 400g of a variety of cucumber that they say that we can plant any time of year. 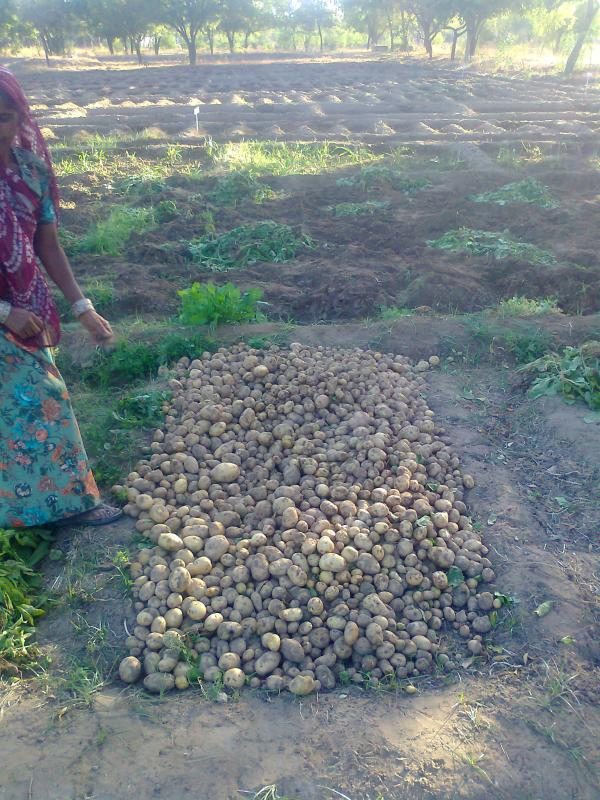 On the 27th 3 ladies spent the day digging out our potatoes and 200kg or 2 quintals were harvested – some large and some tiny. This was a nice surprise and these will supply us for some weeks and will hopefully stay fresh in our coolroom which was again running since the 20th.
The total sabji harvested for the month was 543kg. 140kg of the total was carrots and 85kg was green onions. We harvested 55kg of salad or lettuce leaves this month.

Therefore it was not necessary to buy sabji for the group as we ate a lot of carrots and mangold and onions and the salad was also supplied. This was a huge blessing.

On the 14th and 15th we battled with the irrigation system of Shiv Bagh and managed to soak most of the beds. Vinod cleaned the pathway of Bermuda grass daily and the Pushkarmool flowers began to appear everywhere by mid-month. There are still a lot of empty spaces especially on the west side but we hope to fill these in over the next month with some more perennials like keli – Cannas – and some deshi rose bushes from KVK – Ganganagar variety. During the middle of the month the ladies repaired the channels and so when Swamiji came the area was looking green and colourful as the garden emerged from its winter dormancy and the golden hedge grew new leaves in a pretty shade of green.

We filled about 400 black potting bags at the beginning of the month and these were shifted to a prepared area opposite the workshop where there are no neems and a lot of shade. Trenches half a foot deep were dug and 14-16 bags put in each with 2 feet between each line.
Puspa will bring 2000 more bags from Jaipur in March and more udon mitti has been ordered from Deeparam-ji.

Thinking ahead – the monsoon area

As the winter area empties we shall put any dried slurry from the gobar gas plant on the lines and slowly prepare the area for the monsoon vegetables and the chillies. In this way we can spread it all over the area and plough it in before the rains come.

Organic store and the aftermath of the kumbh store

We sold most of the stock that was sent in 4 steel boxes to the kumb in January.

The coming months are the time of year when we prepare a lot of new stock as the weather is hot and dry and ideal for sun or shade drying  of colostrum, herbs and certain fruits, flowers and vegetables.

The enthusiasm and support for the produce is very much appreciated and we hope to produce a few new items this year. We probably would have had some nice fresh sunflower seeds this year as there were so many huge and well developed plants in our alfalfa area but unfortunately for the humans and very fortunately for the parrots the flower heads were consumed even before the seeds had properly developed. In the future we will need to construct a shadehouse for these plants or to bag each one separately. The former would be costly though an excellent investment and the latter painfully time consuming.

It was Swamiji’s wish during this visit that the group would bring with them to Europe 5kg of neem powder each. About 20 people took 32kg with them.

Care of the young trees

This month the ladies worked very hard making gamlas around all of the amlas trees to the east of our lemon orchard near the gobar gas plant and they also covered the gunda trees in that area and one large bael patra – Aegle marmelos. All trees were given a tigari each of well matured and powdered gobar. They also repaired the trees along our main pathway and along the southern fence which we call the imli line as there are some tamarind trees growing there.

A gobar plaster flooring for our new shade hut

In order to complement the natural beauty of our new shade hut in the garden it was decided that we should make a gaar flooring with fresh cow dung, sieved jhikra – a reddish mountain loamy soil and water. The ladies were very proud and happy to make this as it represents a cornerstone of their culture and is a very cost-effect and hygienic for m of flooring which not only keeps mosquitoes and flies at bay but also cobras and scorpions. In the short video one can see the process – sorry I accidentally muted the mic – and later in the month during our pooja Swamiji Phoolpuriji commented that we should have made such a floor first for our pooja area and then for the team and so we made an extension of the floor on the 16th so that the pooja area was also covered.

Another visit from the KVK team – regional Pali branch of CAZRI

The KVK team visited us on the 25th during our irrigation of seeds sown during the morning. They had been promising us some good quality bhindi seeds saved from their 2012 crop and so they personally brought a sack full of pods and also some good quality lauki seeds. They gave us some very useful tips on how to save time, labour and water and also mentioned the following useful suggestions and information:

The Ganganagar rose bush babies could be collected in early March, however they are still at the rooting stage and there is no guarantee that they will develop well.

All in all it was a rare privilege to be in the presence of such experienced scientists and it was also great to receive praise from them and encouragement for the future. 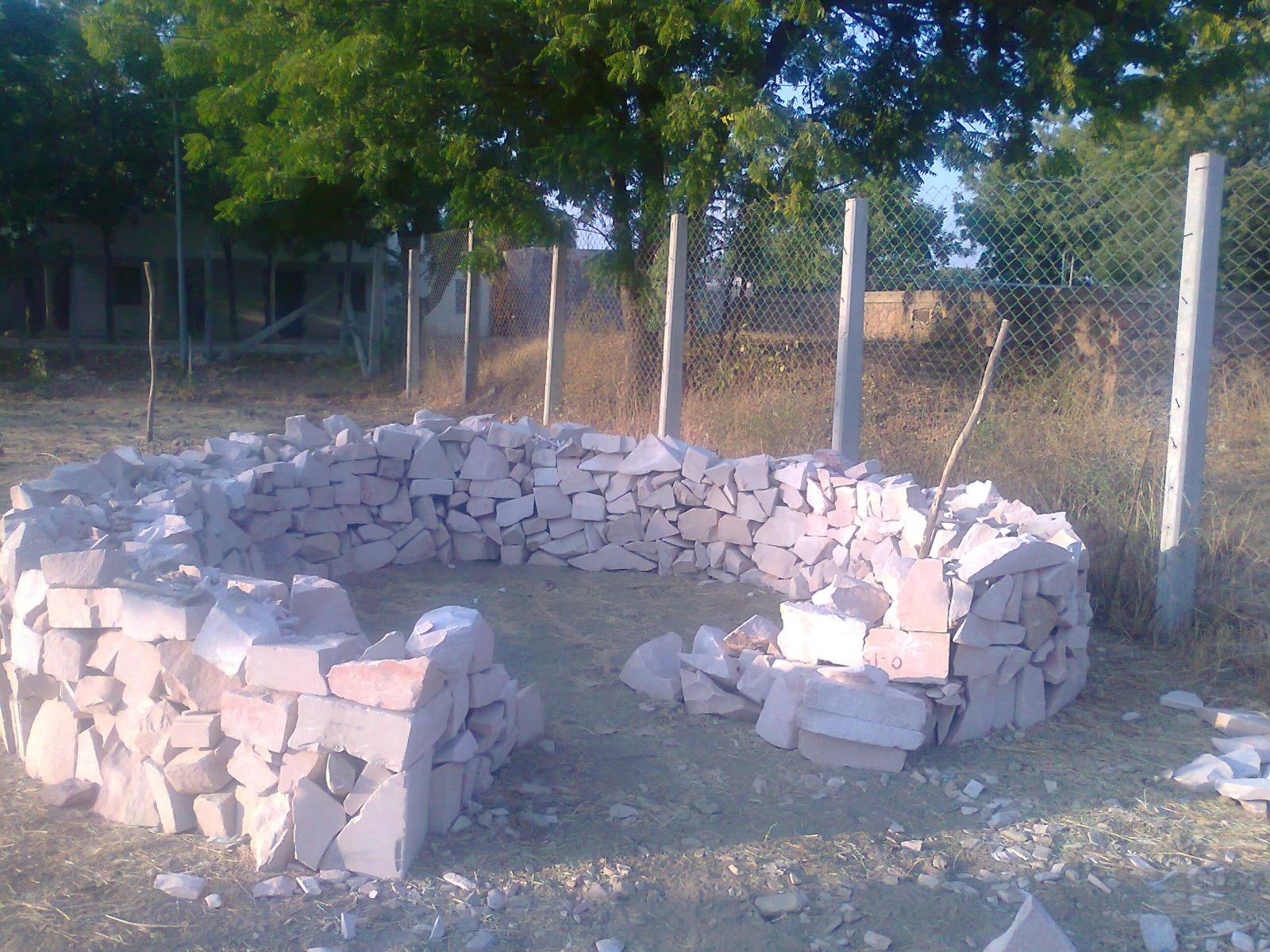 During Etbin’s 2nd and last month in ashram he introduced us to the concept of a keyhole garden which is used quite extensively in countries in the African continent and in Australia. To begin with an area is cleared and a dry stone wall in the circular shape of a keyhole is constructed. This was possible here as we have tones of stone that is not suitable for construction and is spare. Then some pruned branches are placed at the bottom – the first layer. These came from the pruning of all the bougainvillea plants around our kitchen area and STD office. The second layer was comprised of dried grasses, the third well composted cow dung, the 4th the clay loam that had been dug out of our raised bed foundation and on top of this we put some of the udon mitti that we used for our karela and toru long bed along the new 32 metre wooden fence and for potting mix. In the centre of the garden a tree was placed before all the matter was put inside and later this was leveled off with an angle grinder. A simple wooden lid was placed on top and some steps were constructed in the centre of the structure so that our waste food can easily be emptied inside the cylindrical fence – ex tree guard and this will slowly compost and create a very nice black hummus over the next 10 years.

We planted some NSC and videshi pumpkin seeds in the keyhole garden on the 26th and it is hoped that these will get strong roots and enjoy the rich compost and that finally will we succeed in growing pumpkins in Jadan after many many failed attempts. It is interesting to note that the government pureline seeds from NSC which have been treating with poison were not targeting by the chipmunks for snacks and that the larger saved pumpkin seeds from Europe were!

At the end of the month the ladies dug around the peepul trees and the barla – Banyan – in the Yogeshvar Vatika – the name that Swamiji gave to the garden planted in Mataji’s honour next to her Samadhi. Gobar was put around the trees and the tulsi sections were also cleaned. During His stay here during the last week of the month Swamiji requested that Samadhi area with gundis and deshi ber both of which bear berries in season from which the birds can feed. If we decided to go with Chinese jejube or date which is called bor is the local language then that would also be great as these are larger and very healthy and we could get some good cuttings from our local KVK.