Amazing results from this perennial.

By the 5th, seedlings were visible in nearly all of the new beds and of course a lot of weeds which is a given whenever cow dung is used. The 120 plus eggplants bushes that were transplanted to our monsoon field and opposite the workshop became very productive this month and we harvested 64kg from all plants combined. The total for the month was 280kg and 99kg of this total was tomatoes which are doing really well near the eating verandah though the plants themselves looked tired and sickly by the end of the month though they were producing about 10kg of apple-sized tomatoes daily towards the end of the month. Oddly enough, the tomatoes in our larger cultivated area look super healthy and large and yet only have cherry-sized fruit due to the lack of sweet water there. In April we shall start to water them with Pali water as with the passion fruit that is fruiting but only hard fruits and some of the flowers are drying up and falling down. 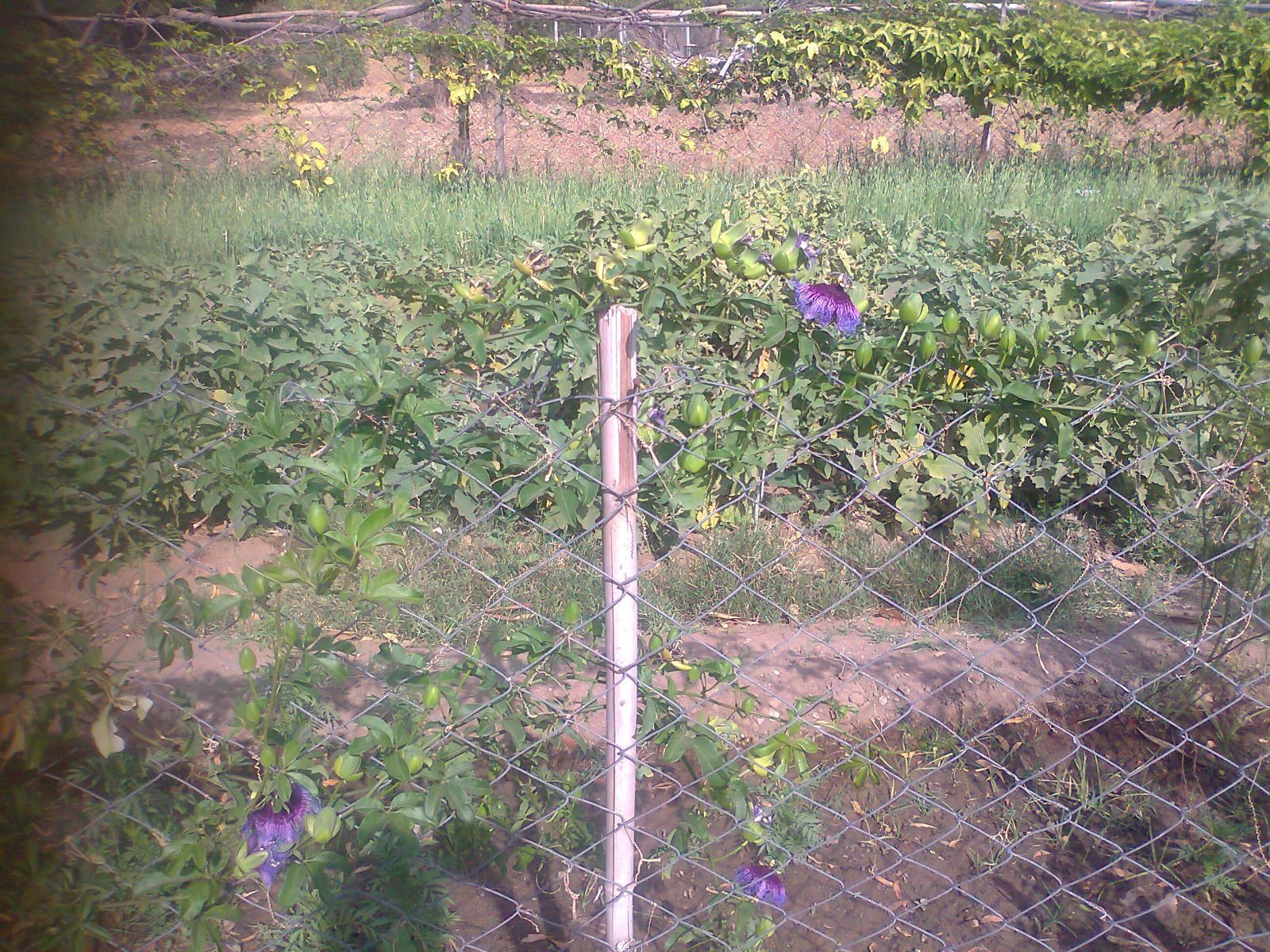 At the end of the month during the Holi break the garlic was soaked and then immediately harvested - 40kg – in order to facilitate uprooting. The roots were strong, long and healthy looking and the bulbs from medium to small. Not as large as one would have hoped but a good quantity for the coming year.

The palak was removed at the beginning of the month (1st) as it was going to seed but the mangold or silver beet is still going strong and so we watered it a couple of times this month. We cut 20kg in total and so by the end of the month along with the chandaliya (planted on Feb 15th) we had 2 kinds of leafy greens.
What to say about the summer sabji? Yet again the curcurbit seeds purchased from Pali failed and therefore on the 14th we replanted these 6 lines with the hybrid variety guaranteed by our KVK team. The tindi also needed to be replanted and some bhindi areas. If these cucurbits fail again then we shall do as we did last year and plant our reliable toru seeds in those areas.

Thankfully the lauki and pumpkin are doing well in our permaculture beds and the toru and karela in the long beds that we made for them though the karela and smooth toru both needed to be replanted in some places. The bhindi is looking good and we expect produce by mid April. All the vegetables were sprayed with a new batch of biospray once per week this month and we regularly  used a mix of neem leaf and bark powder and wood ash to throw over the seedlings in an attempt to keep the red pumpkin beetles and the destructive hoppers at bay. 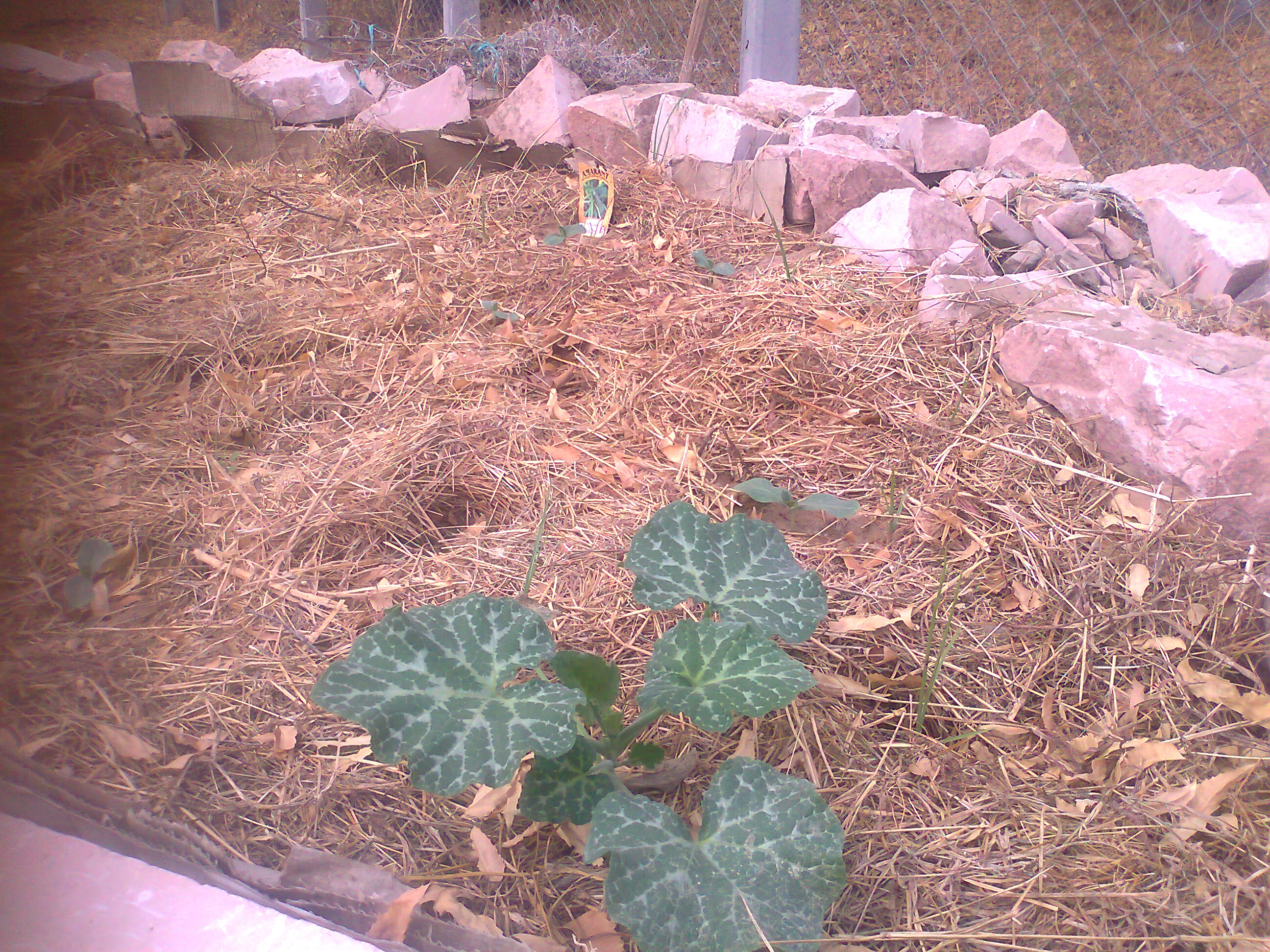 Pumpkins growing at a champion rate!

On the 4th the last 6kg of carrots and the last 9kg of green or spring onions were pulled out and all the vacant areas of the winter vegetable were weeded as there were many nice tall and green weeds there for our cows. The garlic was not watered again after February as the leaves were slowly turning yellow and the remaining sabji was mangold which will be watered and harvested until the chandaliya is ready for cutting.

On the 1st the palak was removed and 7.5kg harvested and the green stems were fed to our cows. The peas were also taken out on the same day. Weeds that were large and started to seed were removed from the area when time allowed and our cows very much enjoyed these. The area will be gradually prepared for chilli seedlings and monsoon vegetable varieties between in the month of April – we have to think ahead all the time so that the cow dung has more time to compost inside the soil.

Makeover behind the White House

This month we finally had some time to rake up some of the tree litter behind the white where some fruit trees are struggling to grow. The trees were re-staked which was very much needed and we pruned some of the trees and bouganvilleas there. Some grass was cut too and taken to the cows which live near our Shiv Mandir. It is a barren and dry area but does look a lot more attractive after removing the dead leaves and dead wood. From February to April thousands of trees drop their leaves in our ashram. It is their spring activity which stimulates them into producing sweet and fragrance flowers – neem flowers for example and these later turn into sweet yellow fruits called gudlis. This means that a lot of tree litter can be raked up and taken to areas for composting. It is valuable material but time consuming to do and of course very hot work after the end of February. 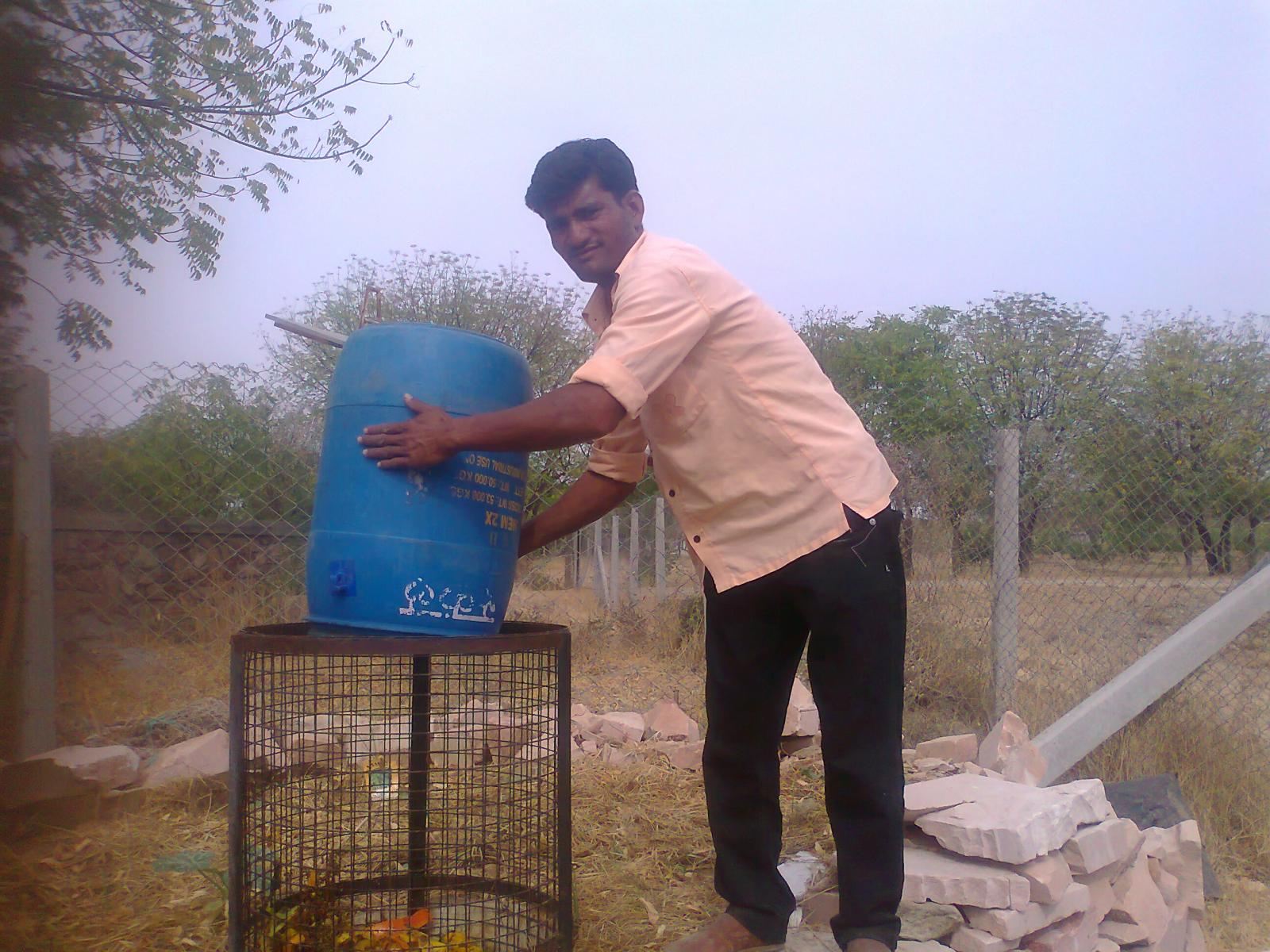 We dug over our plants on the 5th and sprinkled neem and ash over them. The workshop tomatoes were sprayed on the 3rd with the last of the winter batch of biospray. All were full of aphids which is always the case but most were dead owing to the spray and the locals – as always – told us that they will die as soon as the heat starts. 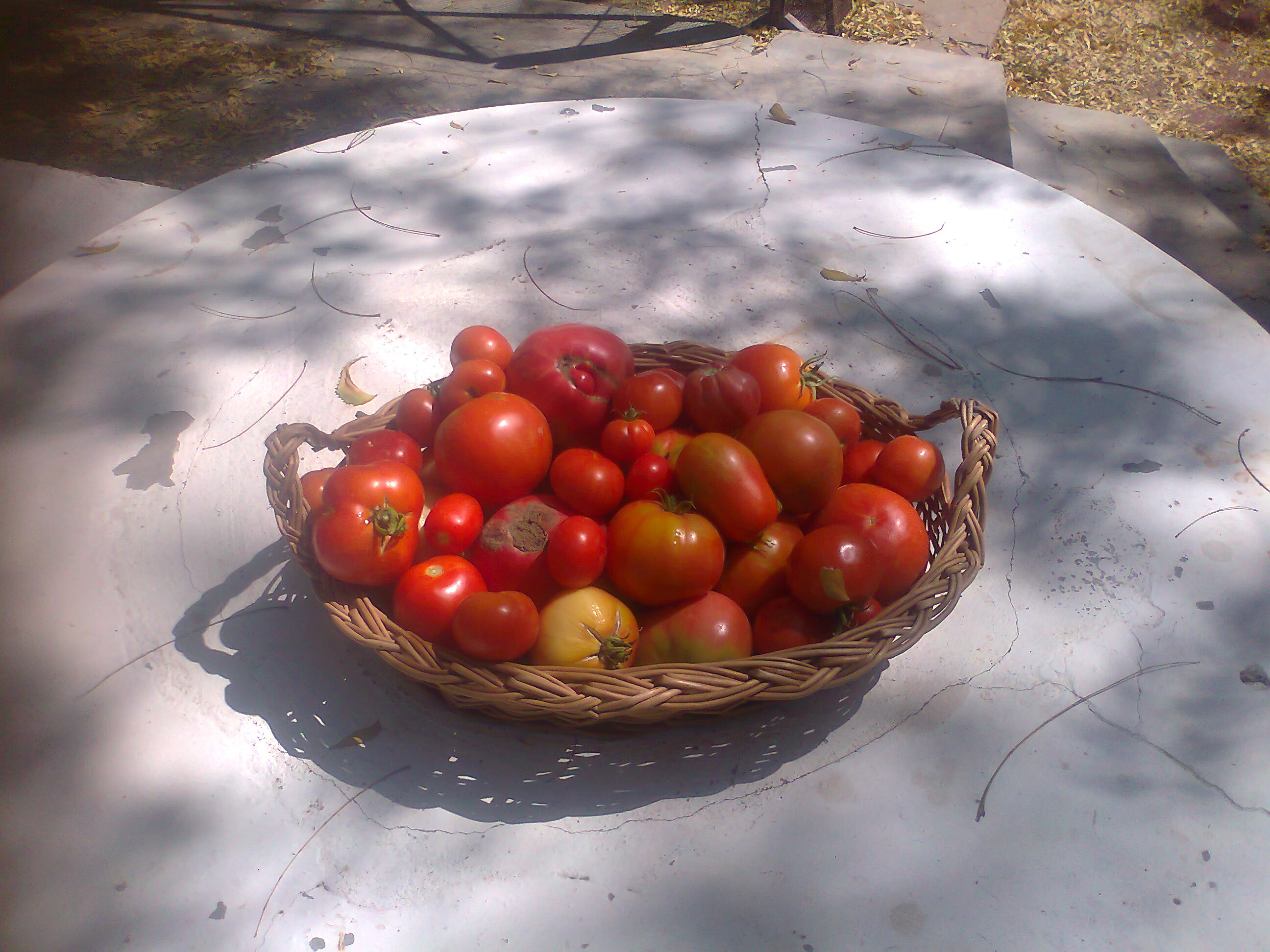 We ran the pump for a total of 22.5 hours this month – the longest periods were on the 6th, the 16th and the 25th which is when we soaked the Shiv Bagh channels. We are doing our best to be minimal with the water which stood at just over 2.5 metres at the end of the month which means that 50% has gone since September. However most of that water has been lost though leakage and not because of the garden team!

Deeparam-ji organized 4 huge truckloads of sandy soil for us this year. I had particularly wanted the same quality as last year which was very soft and stoneless and totally suitable for potting and propagating small trees – either saplings or from seed. However this year’s batch is rougher and slightly reddish in colour and initially I was worried that it would become very hard between watering, however on closer inspection and after testing it in water it appears to be quite good. As a result we spread two truckloads on the far east side of our winter kheti which comfortably covered 3 lines and to this we will add all the presently available gobar slurry from the trays which are full and then we will compost it for 3 months in preparation for the first stage of our monsoon area.
The soil on this side is pretty tired and in need of a makeover. The 3rd load is near Mangilal-ji gate and after the tomatoes have gone out of season we shall have it spread there in preparation for the elephant grass – some of which will be transplanted there to shade the 12 figs trees and also for some intercropping with vegetables such as lauki in the monsoon. We will also raise up some chilli seedling there in June and make 2 lines this year in the ex-winter area. The 4th pile is over near the canteen and this is stock for when we make new beds which need some new topsoil.

We put about 500 seeds into bags this month – a mix of moringa, papita and the rest of the Nepali tilak seeds. The Ramphal or Australia custard apple saplings – 180 - were transplanted from the east Shiv Bagh bed to bags as well and some are doing very well. It is amazing that from the 2 fruits that Swamiji gave us we have so many saplings –miraculous more like. Where to plant them is the next big question.
The nursery is either watered by can or by sprinklers and it is a shady area free of neem trees near the new workshop wall. Some more potting bags were purchased in March. 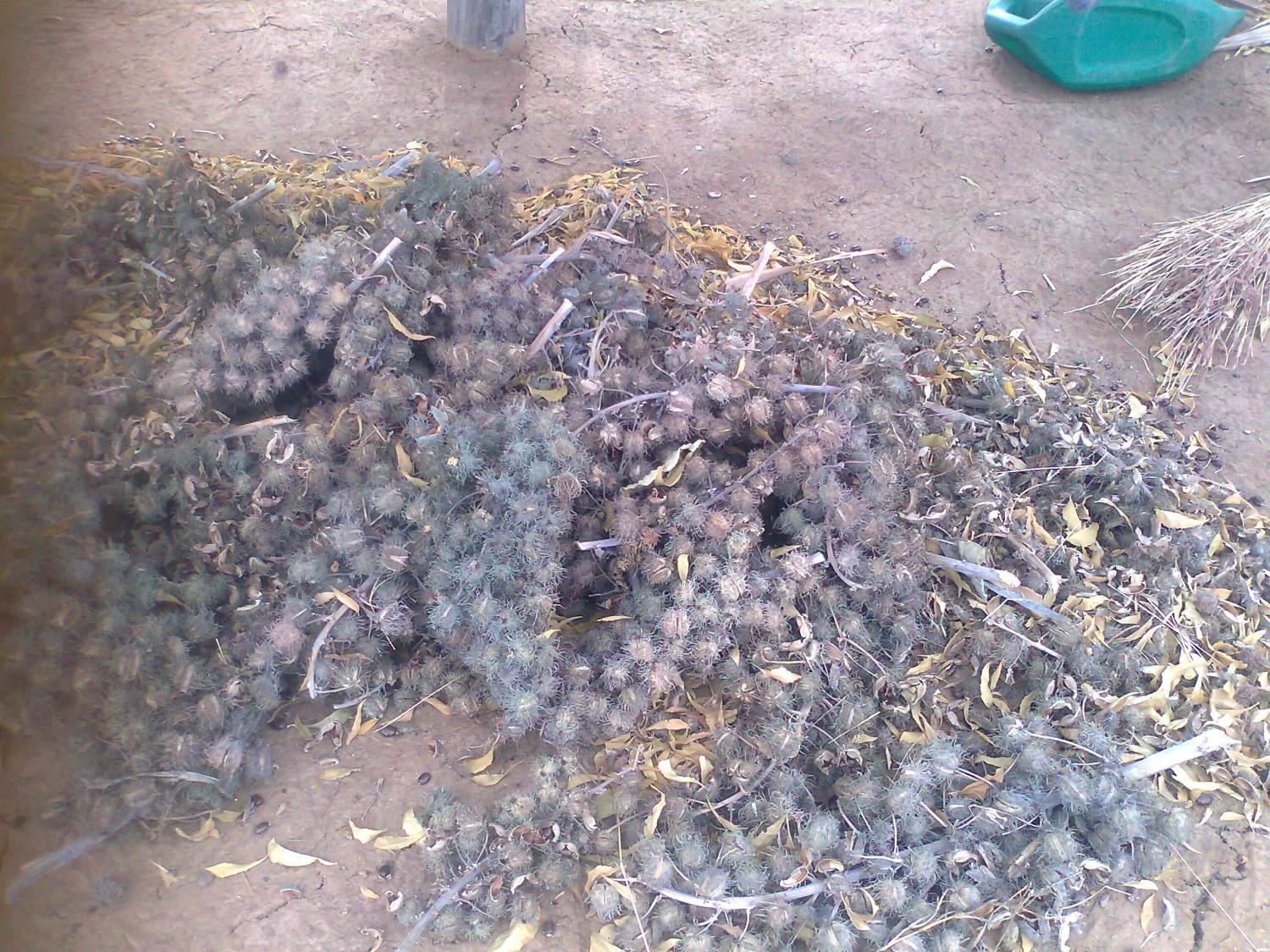 On the 4th we farewelled our dear Etbin-ji who worked tirelessly for 2 months in our large field creating singlehandedly systems for low water consumption and high plant yield. In short, he created composting systems that have a life span of 7-10 years that will hopefully produce some wonderful vegetables and hummus. He also made beautiful fences and vine trellises made from logs and bamboo that he collected from our scrap heaps and changed the whole atmosphere of our field with his umbrella-type shade hut.
He intends to return within the next 10 months and has sent us a beautiful collection of organic seed varieties since returning. Thank you a thousand times for your motivation, strength and knowledge as well as the will to succeed in a difficult climate and environment.

Irrigation until the monsoon

There is no need for night irrigation this year as Puspa will manage herself most of the watering required from dawn until 9 or 10am. The summer vegetable area takes about 1.5 hours to water and from about April 20th this will be necessary twice per week. We will try to water Shiv Bagh every 10 days and use the sprinklers in between to keep the blanket flowers on the east side happy and fresh in between. Temperatures for the month went as high as 37 degrees and we had about 10 days like this before it cooled off a bit. The tomato patch needs flooding every 5-6 days and jowar, napier grass, oats and Lucerne grass in the large area need water at least once per week. A line of jowar or sorghum wheat was sown mid-month using some good quality seed (8kg) purchased. 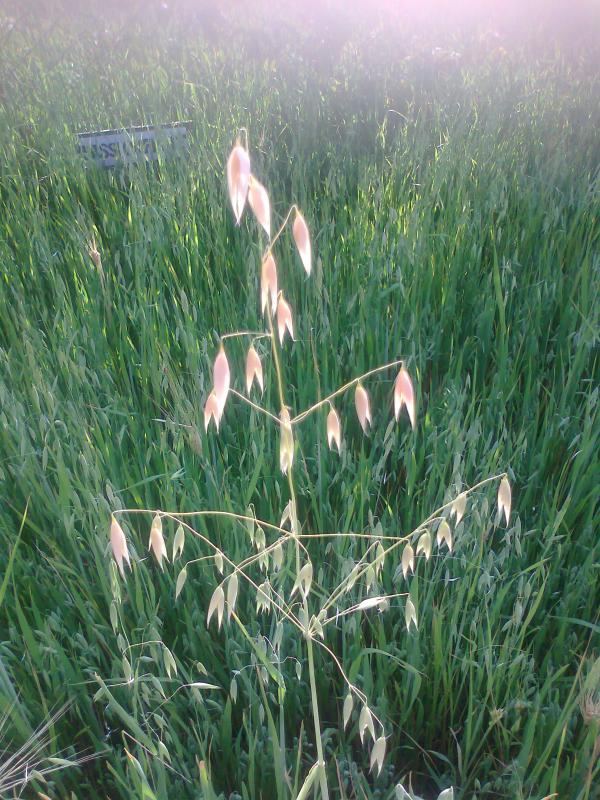 The permaculture beds need the least water of all as they are mulched with dried grass and yet the lauki and pumpkins which have been planted in them are bigger than the other vegetables in the open field. Even so these growing systems will remain under observation until we can be sure that there is no presence of termites inside the beds.

Pali water will be utilized for our young trees in the fields namely the gundas, amlas, acid limes which are called lemons in India and imlis and mulberries or chatoots. These all need special care as many of them will produce fruit and vegetables (gundas/Cordia myxa) this year. The lemons trees look majestic with tiny tiny fruits forming and their leaves shining healthily in the spring sunshine.

We had many cloudy and humid days during the Holi break from the 26th to the 30th and on Holi Purnima itself there were tiny drops of rain but it amounted to nothing – only some cooling clouds which made working during the day very pleasant. From next month Puspa will do a 7am to 11am shift and then 3pm to 7pm in order to avoid having her brain cooked. Two ladies from the village of Baga Was will come after Holi and help with the weeding of the sabji and harvesting and watering of the saplings and general cleaning and maintenance. They are coming on the bus since the last 2 months and work from 8.30am to 5.30pm with a half hour rest for lunch,

The summer months are an ideal time to prepare stock for the organic store. Amla powder was packed into veggie capsules this month and colostrum will be ground and also packed into capsules. Mowra flowers and some herbs such as mint, basil and tulsi will be cut and dried in the shade and the neem giloy vine that has been drying since Deepawali (!) will be made into a powder and also packed. Swamiji has told us that it is a very important medicine and these plants have been growing here for 12 years wrapped around neem trees and so have also taken on the medicinally beneficial qualities of margosa. We hope to have some good and healthy fresh produce for all the bhaktas who visit us in July and August. See you then. 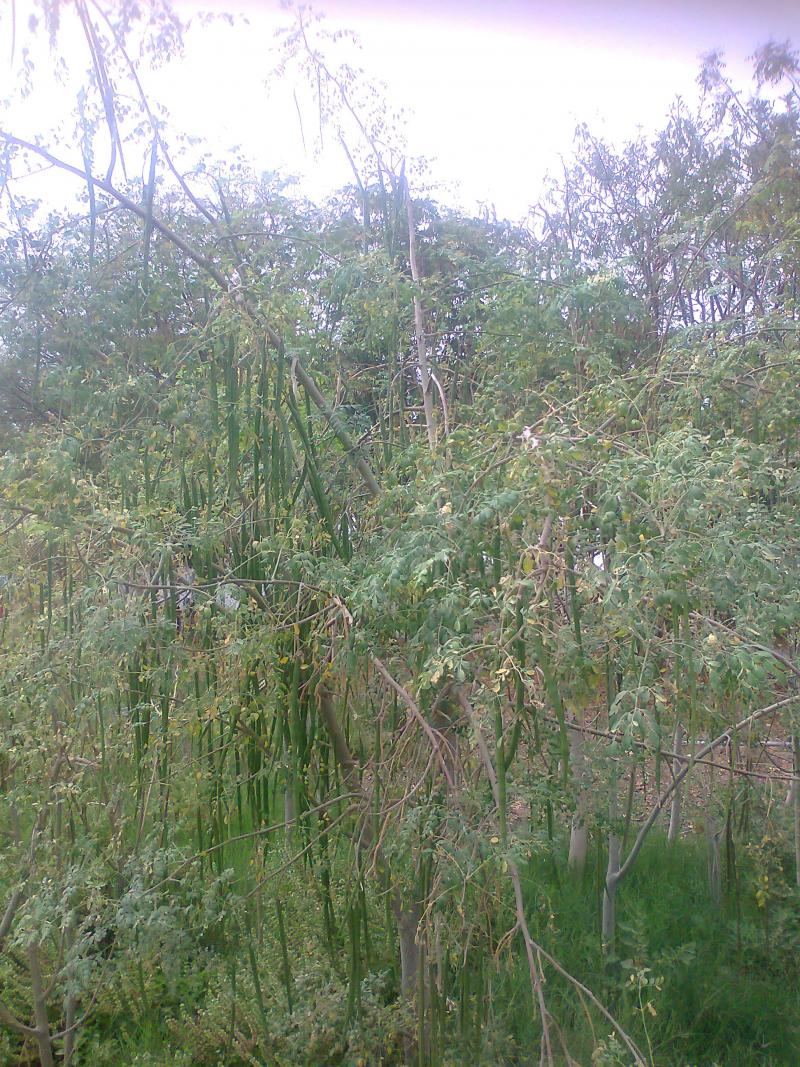 So many drumstick vegetables on our 2 year old Moringa oleifera trees.