The temperature chart for April, lovingly filled out by our dear Sudarshanji, read between 40 and 46 degrees Celsius for every day of this month.

Even then, the night breezes were fresh until the last week of this month of the awakening India summer, with accompanying fire-breathing dragon wind which we know as the 'Loo'. This starts as subtle as a mild breeze, which feels like a small warm fan closing in around our ears, and then it builds up to a crescendo of roaring heat from west to east, bending our trees with its force during the hottest time of the day.

There was a huge action this month to harvest as much sangri as possible from our khejri trees and so some local ladies were employed for this. They cleaned the pods during the mornings and after lunch walked into our forested areas and harvested more. As this action was going on, our sweepers were cutting down gundas from the Madhuvaani trees, using one of our sharp garden sickles tied to a line long bamboo stick, with which they skillfully cut down the round plump clumps of gum berries. 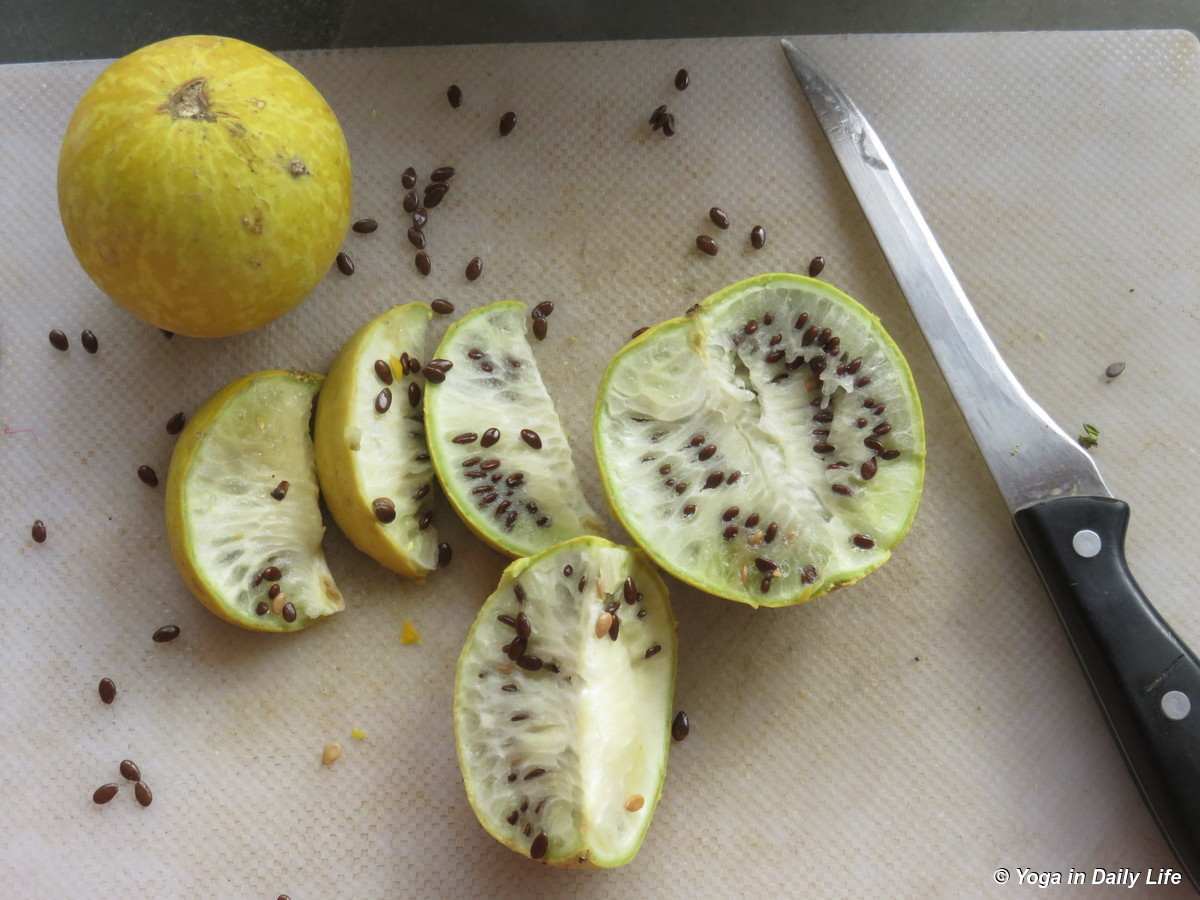 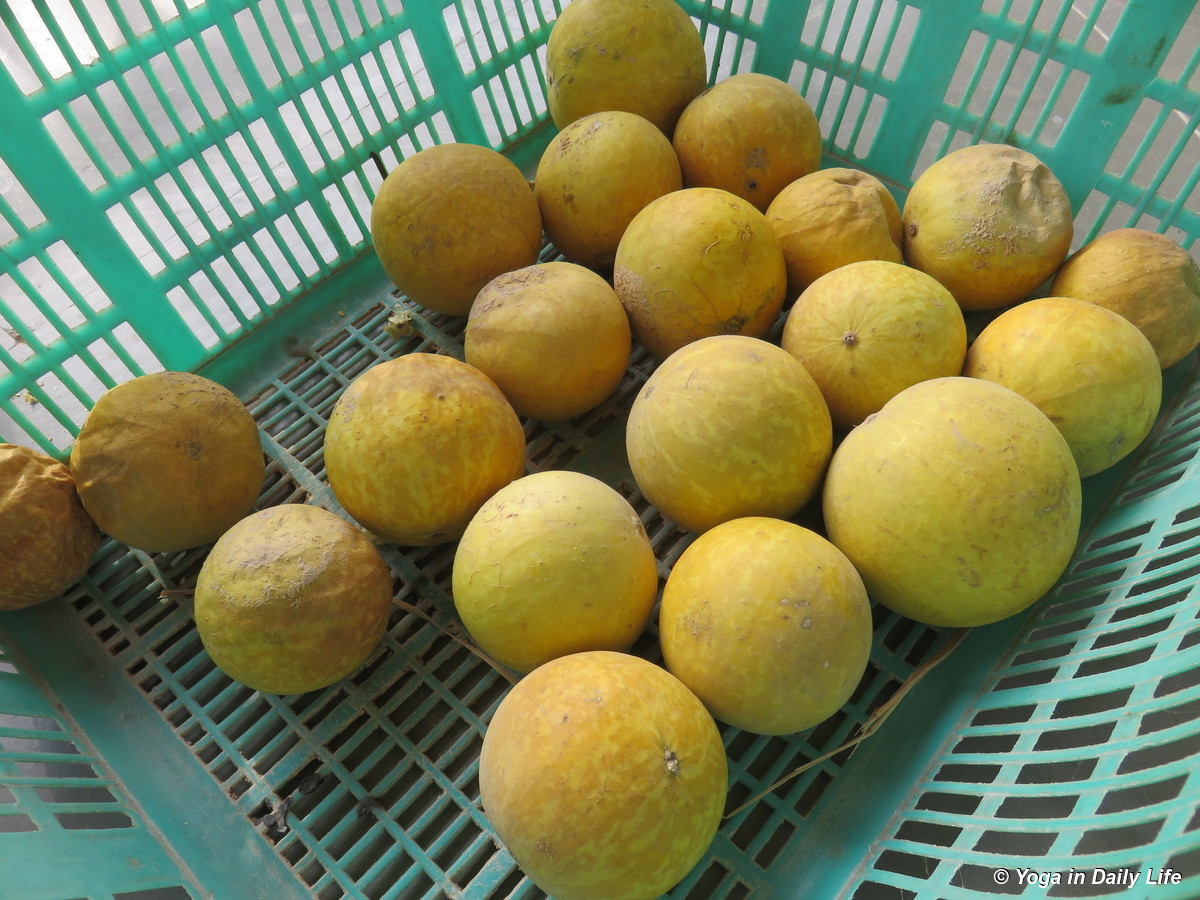 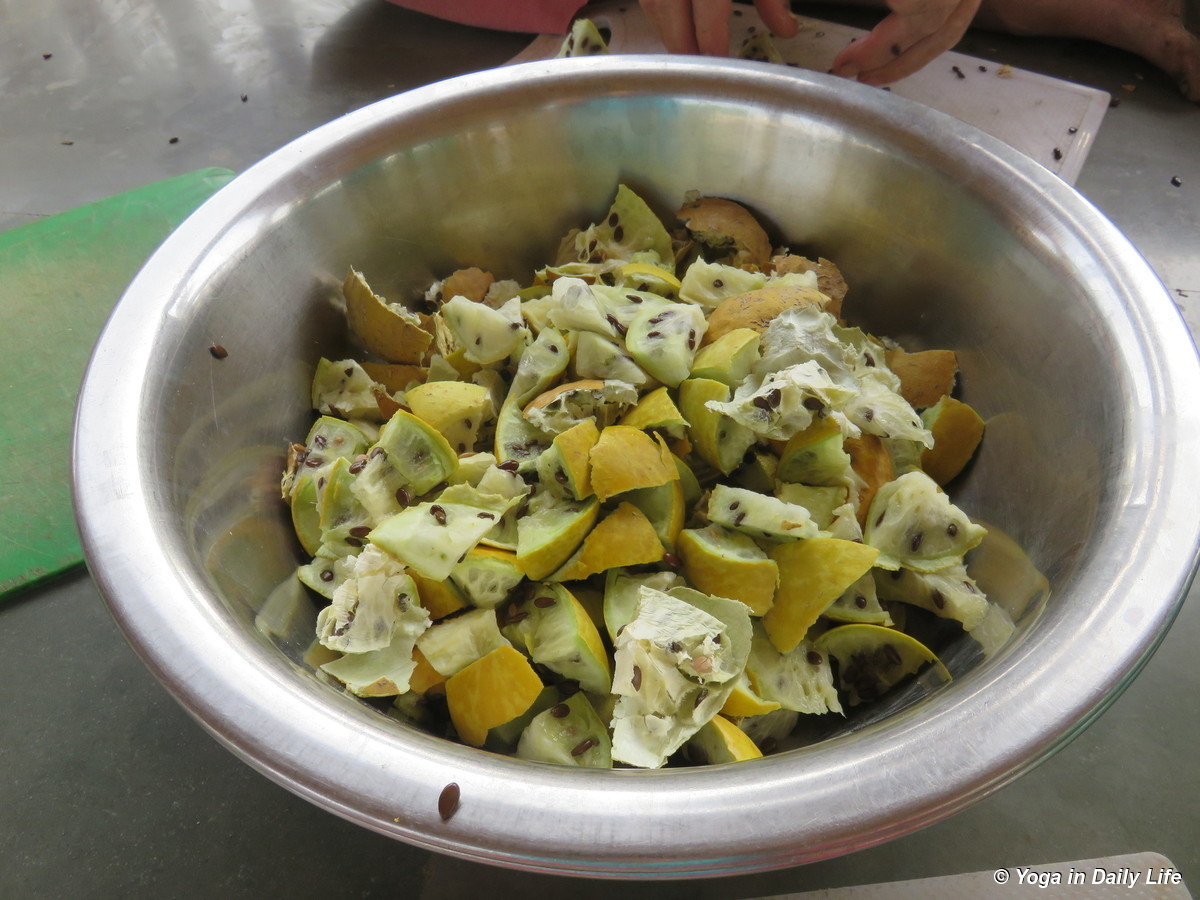 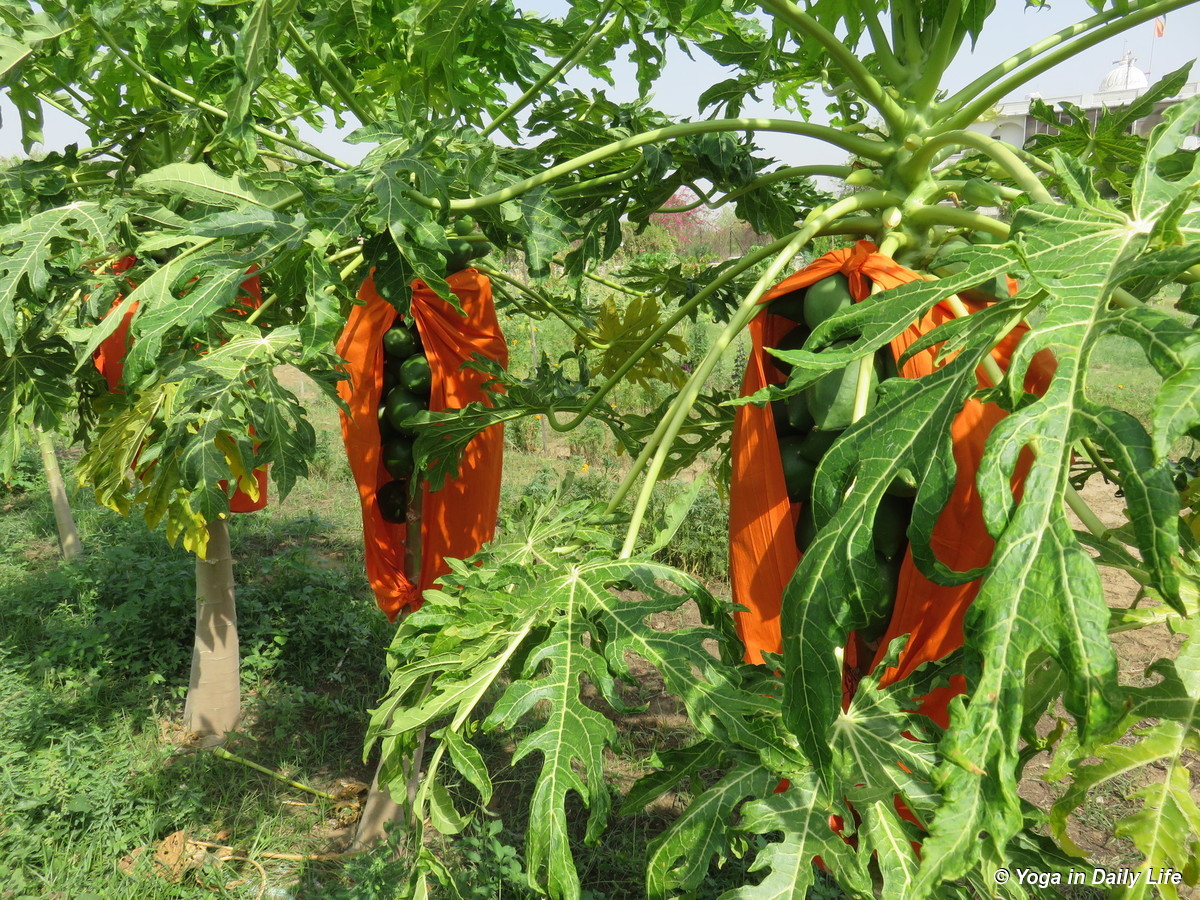 There are times when the heat feels so powerful that one imagines that the gardens cannot survive, but it is only imagination. We can grow and produce during this time, but we have to fight for it. Now it is light at 5.30am and there is a glorious feeling pre-sunrise of having some hours to do the urgent irrigation and weeding until 11.30am; and again after 5.30pm there are two precious hours before sunset, before it is too dark to see any more. For centuries farmers in this land have worked like this and rested during the daytime or found other work during the hot hours, such as seed cleaning and processing tree vegetables for dehydrating in the hot sun, so that they can be stored for nutritious food for years to come.

If one observes the working hands of these local ladies, one can see how much knowledge is inside – of building a good cooking fire; of making a perfect chapatti dough and then cooking smooth, soft and perfectly round chapattis; of measuring spices by feel and weight in the palms of their right hands; of administering a needed massage after a sprain or finding the area by feeling with the palms of their hands where pain and discomfort lies in the back or abdomen; churning the yoghurt into buttermilk and then skillfully removing the fresh butter. And of course, making the perfectly balanced brew of chai – not too sweet or phiki (unsweet/bland/tasteless) and cooked long enough to thicken and darken it. 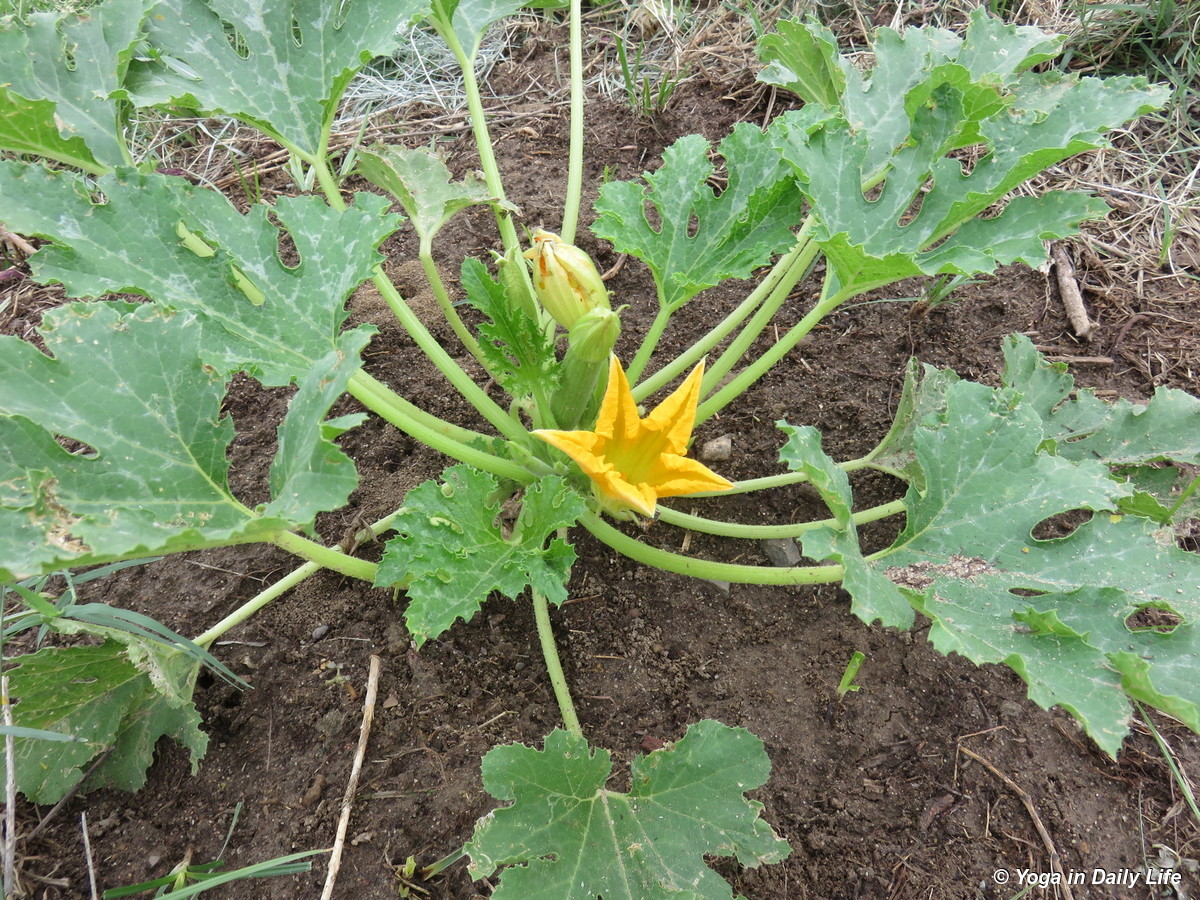 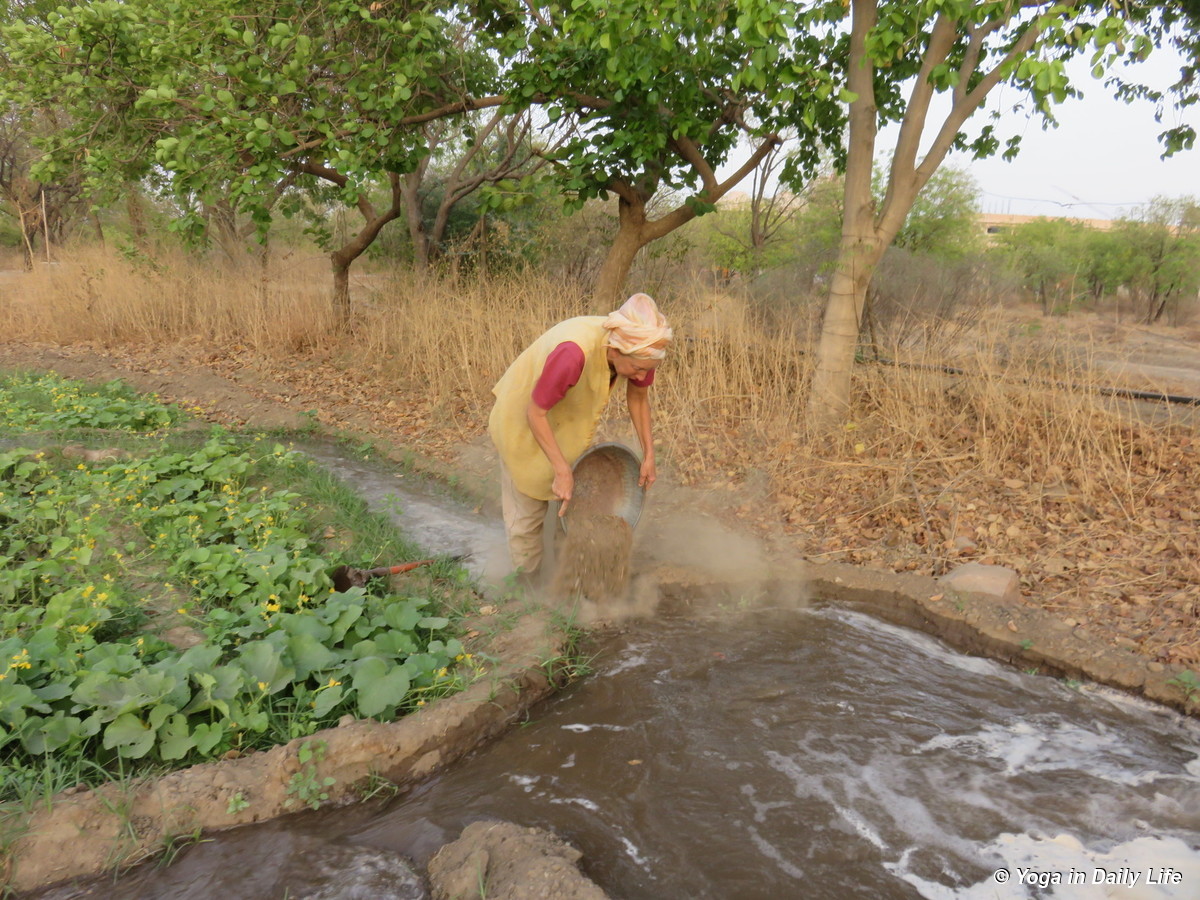 The days are long enough to find time for irrigation, harvesting and weeding, and so we came into the production of our summer varieties late this month – bottle gourd, ridge gourd, Indian cucumbers, bhindi and even a little zucchini, cluster bean and chandaliya, and sometimes green bananas, which taste amazing when cooked with some green papaya and chenopodium leaves ('goosefoot' family of plants that quinoa belongs to). We also tasted some freshly harvested sangri and gunda this month – the latter prepared with sweetened green mango and fenugreek seeds.

In a world when big agro companies have cast their toxic shadow over small scale farmers to the degree that annually, for at least a decade, a minimum of 12,000 farmer suicides have been recorded in this great sub continent, it is always heartening to know that even in extreme and barren conditions, where rain has not been seen now for 8 months, that we can produce something from our own organically nurtured land. 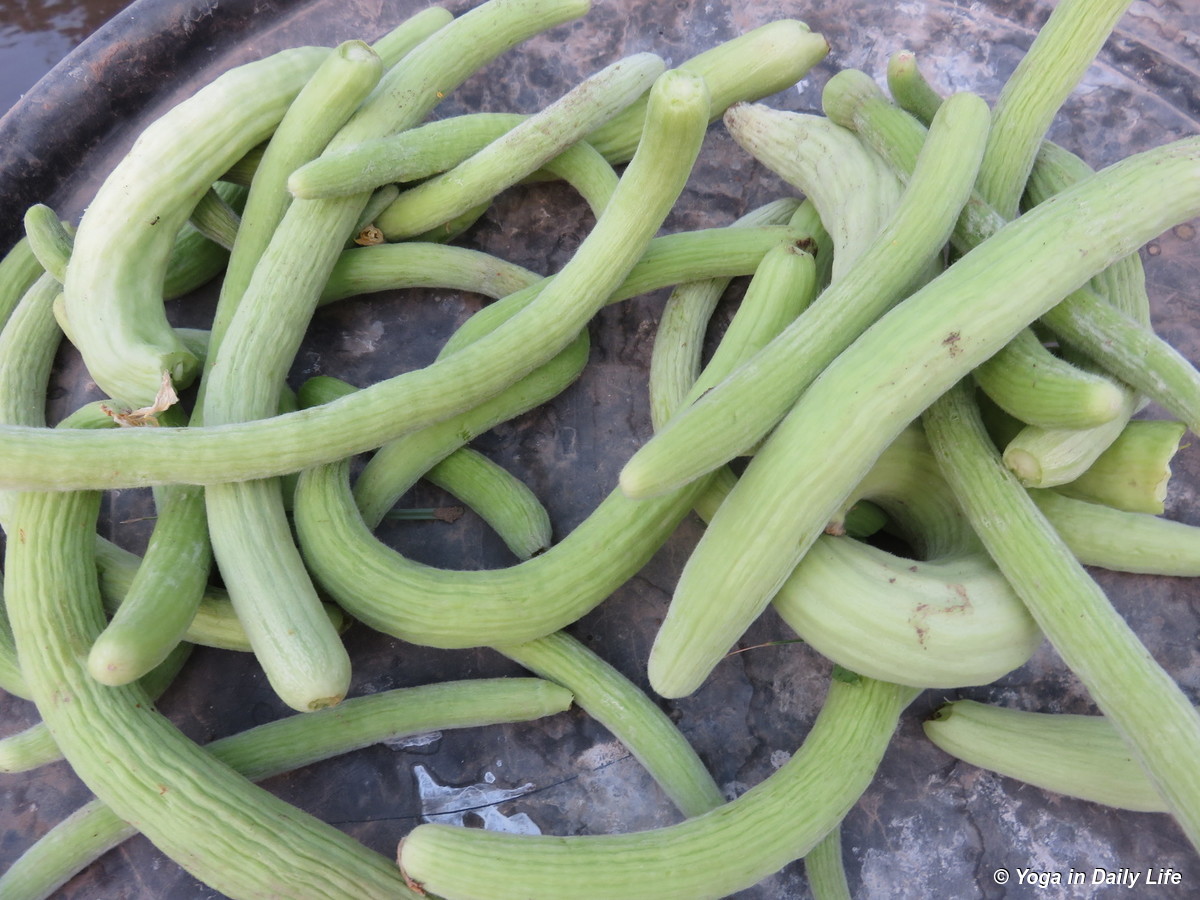 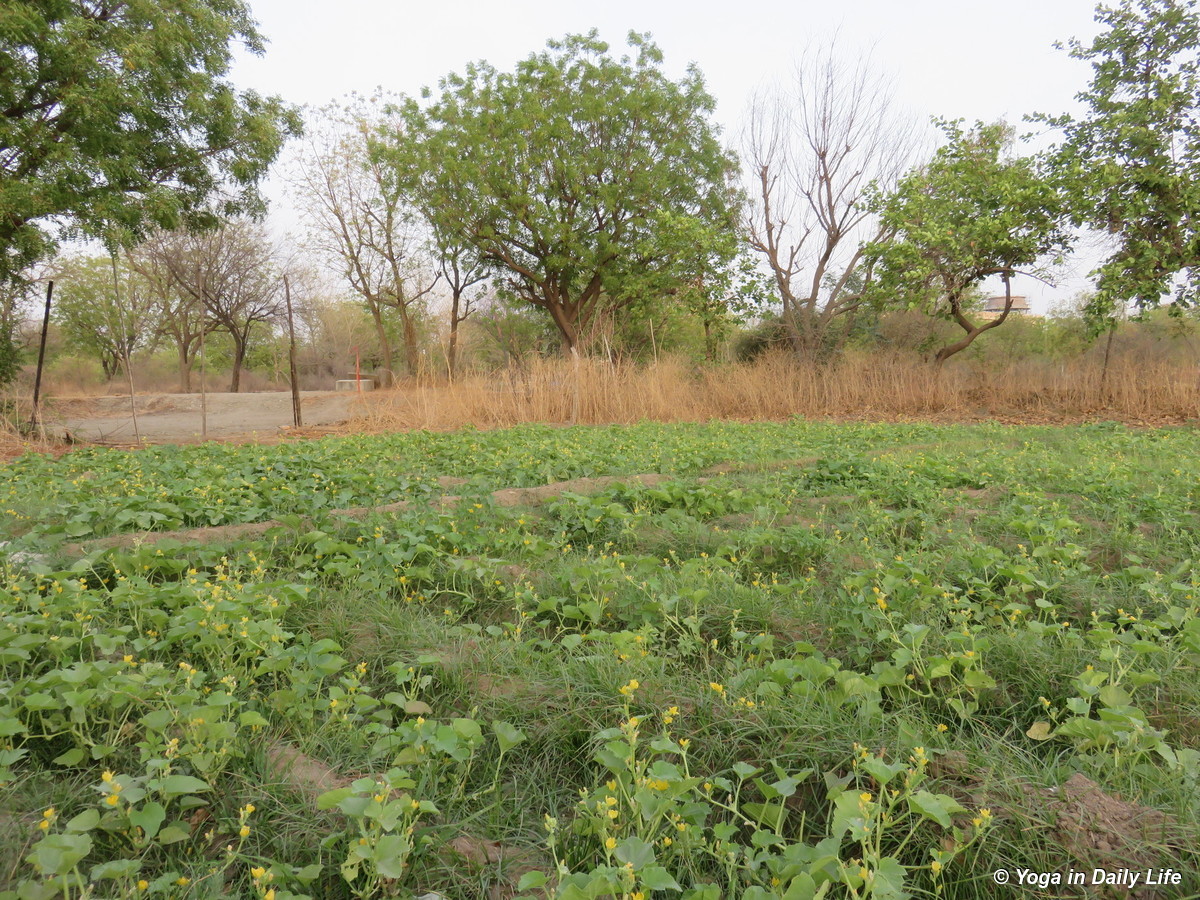 When Swamiji arrived here on the 25th, he immediately spoke about Colony Collapse Disorder (CCD) in the bee populations, which has been a serious problem on our planet since about 2007. Pesticide use is primarily responsible for this so-called phenomenon. When we support those that use these sprays and poison our soil with urea and other artificial fertilisers, then we are complicit in the damage being done to the environment. If you only want a certain type of cucumber – a hybrid type that is familiar to you – then you are supporting that damage by adding to the demand for the supply. When the demand stops, so will the supply. This is not 'rocket science', just common sense, and even then, organic growers are fighting ignorance and even opposition in every country on this planet, including here in India. It is a David and Goliath type battle, where eventually the small and meek, but not weak, will overcome the might of the giant – the bully and the profiteer.

In Sikkim – northeast India, a beautiful region of peace and prayer – the situation of pollution and environmental damage became so extreme that those in power made it mandatory for all farmers there to convert to organic farming. Now all farms are organically certified, making Sikkim the first state of India to be so. A few non-organic items are still allowed to be transported there from interstate, as they cannot provide everything required yet from season to season, but the wonderful part is that they are strengthening their local economy by sending their organic produce to other parts of India and especially to the big cities where the demand for fresh organic produce is high. May the whole of this country go in the same direction within the next few years..!

The last 77kg of carrots were dug out this month due to the great efforts of some of the early bird karma yogi jewels and also about 10kg of garlic, so the winter area lies empty now – a tired block of land, which needs at least 2 years rest. 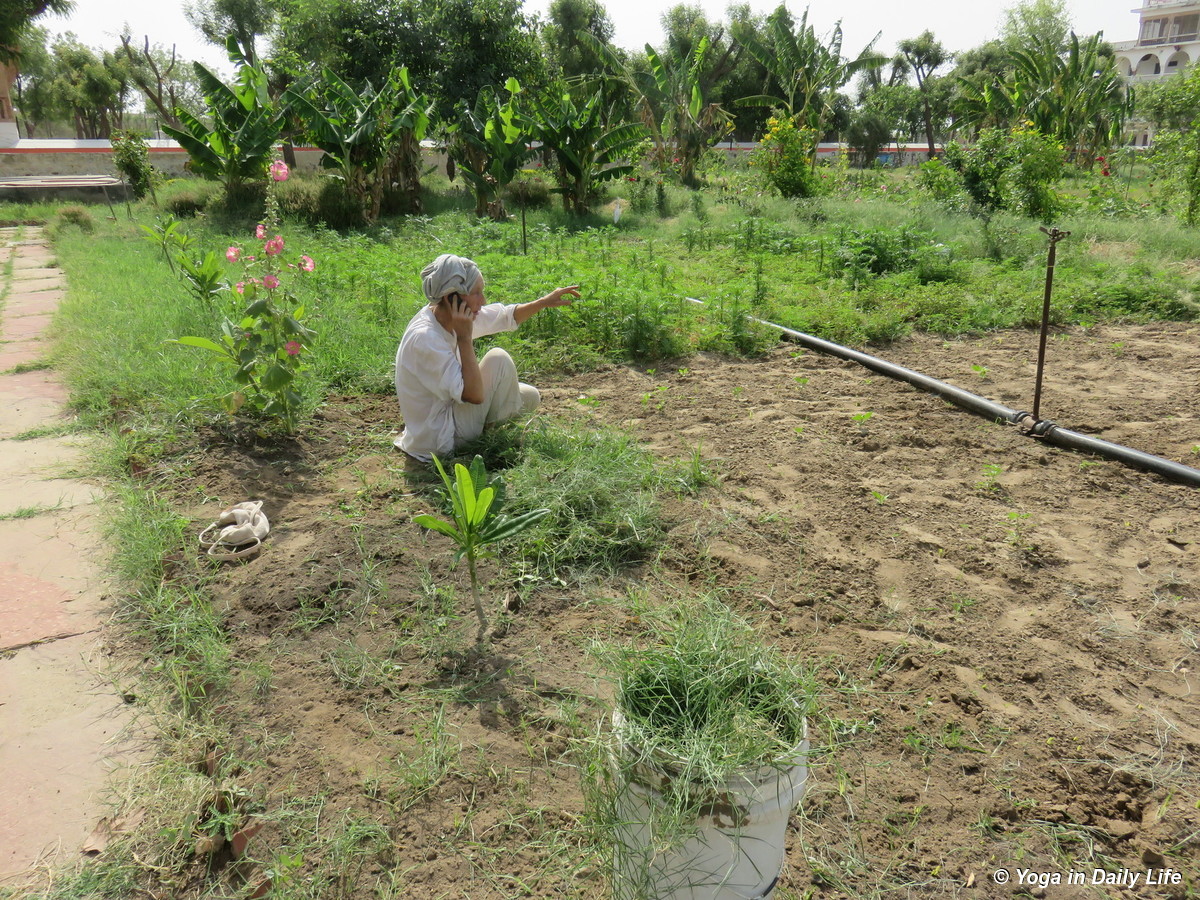 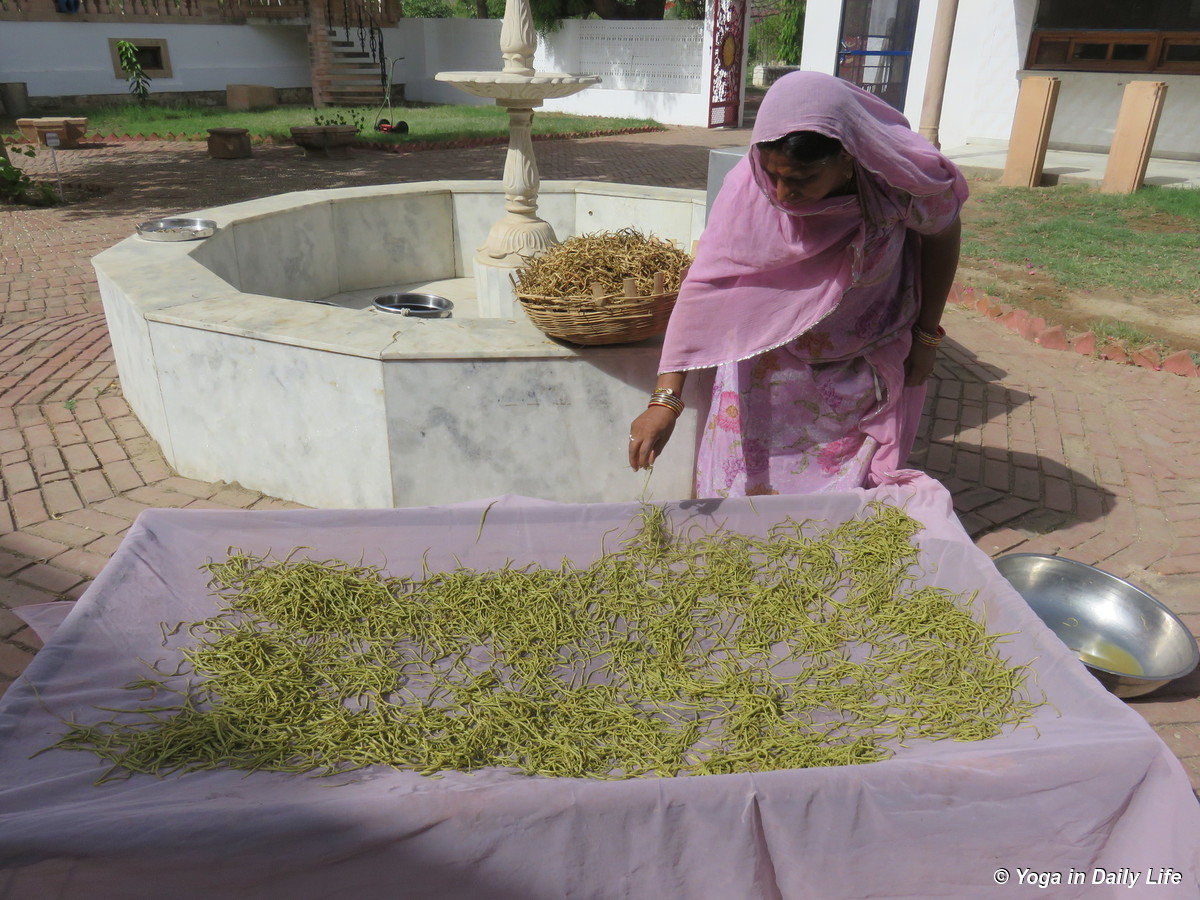 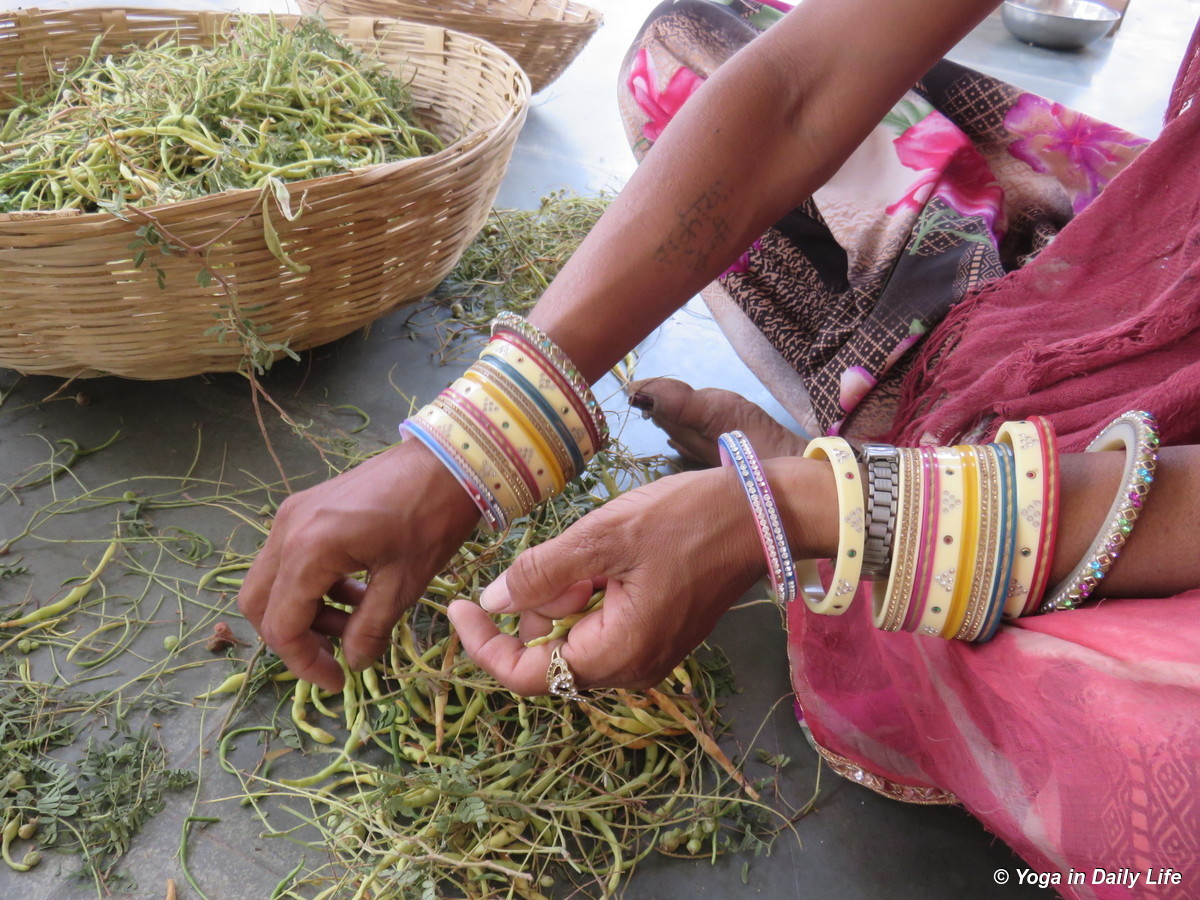 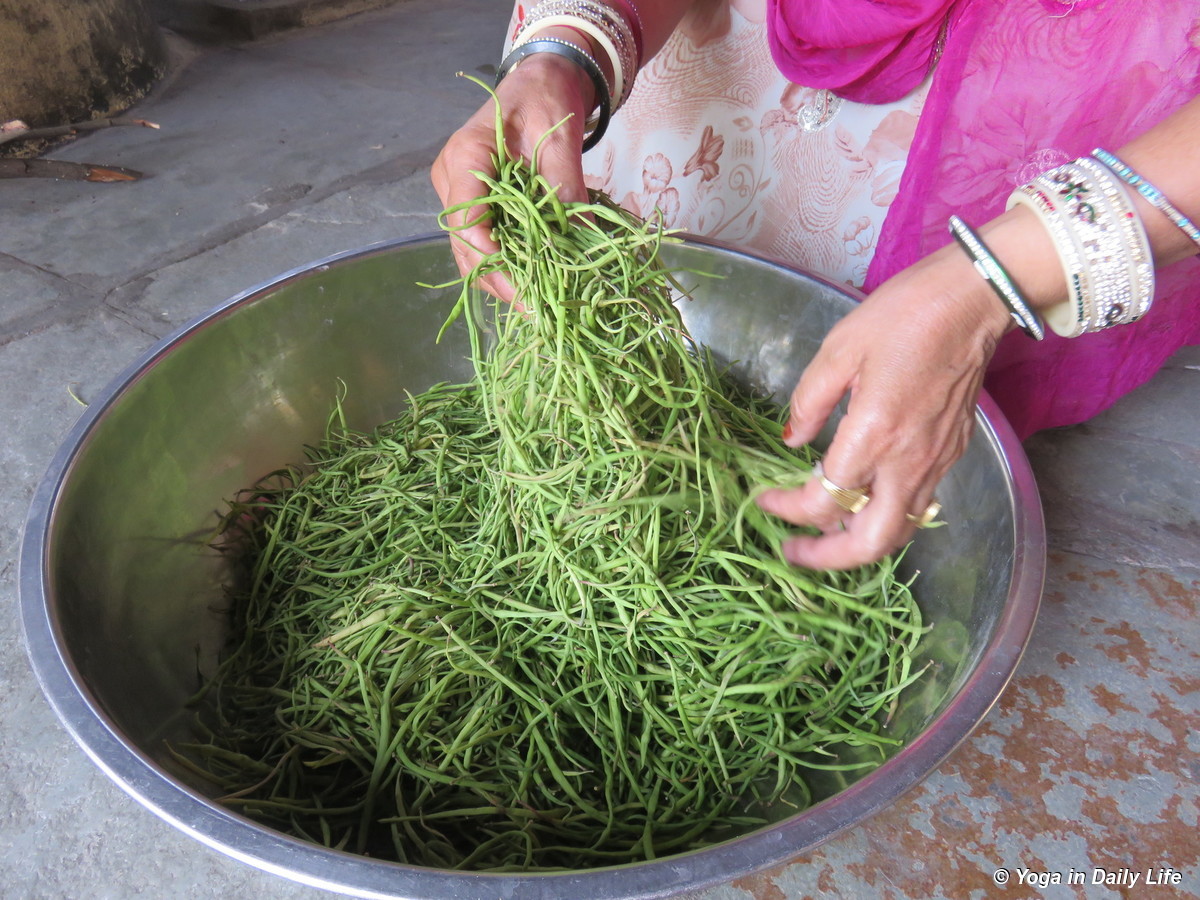 The boiling hot summer post-lunch period is now spent cleaning winter seeds such as fenugreek and linseed, which are now available in the Organic Store along with dried parsley. Many salad seeds have also been collected and stored for next winter's planting and some ajwain seeds too.

During this month, the now empty west section of the Shiv Bagh was ploughed and some old powdery cow dung was spread over the soil. We then broadcast some sorgham wheat seeds there, in the hope of making a westerly windbreak, but they have not developed well under sprinkler irrigation and so the area will be left fallow, but at least fertilised, until late June monsoon planting, when pumpkin seeds will be sown there.

In the meantime, in the same area, the hollyhocks went to seed and are now dried stalks still standing tall but mostly unadorned by their joyful flowers. A new batch of marigolds started to bloom on the north side however and the canna lillies also came into flower this month – soft yellow petals giving colour and nectar to our thousands of thirsty hard-working bees. CCD may be an issue all over our planet, but I have never seen so many hives – especially of the smaller variety – in our Shiv Bagh garden. They are living in every shady and protected nook and cranny, and one really really has to be aware of this on pruning days or when moving about weeding. Just yesterday, I was about to fill a 200 litre storage drum with rain water from the talab and the lid was partly open and inside the dry plastic drum, which had been put there in a shady part of the garden some weeks ago, was a huge hive attached to the plastic inside!

We also have more and more varieties of birds – so many peacocks can be seen behind the White House now and a couple of times in the mornings I saw a group of 10 or more of these huge birds in the Shiv Bagh. Please note that peacocks are not vegetable friendly – they can undo weeks of work during a feeding frenzy! 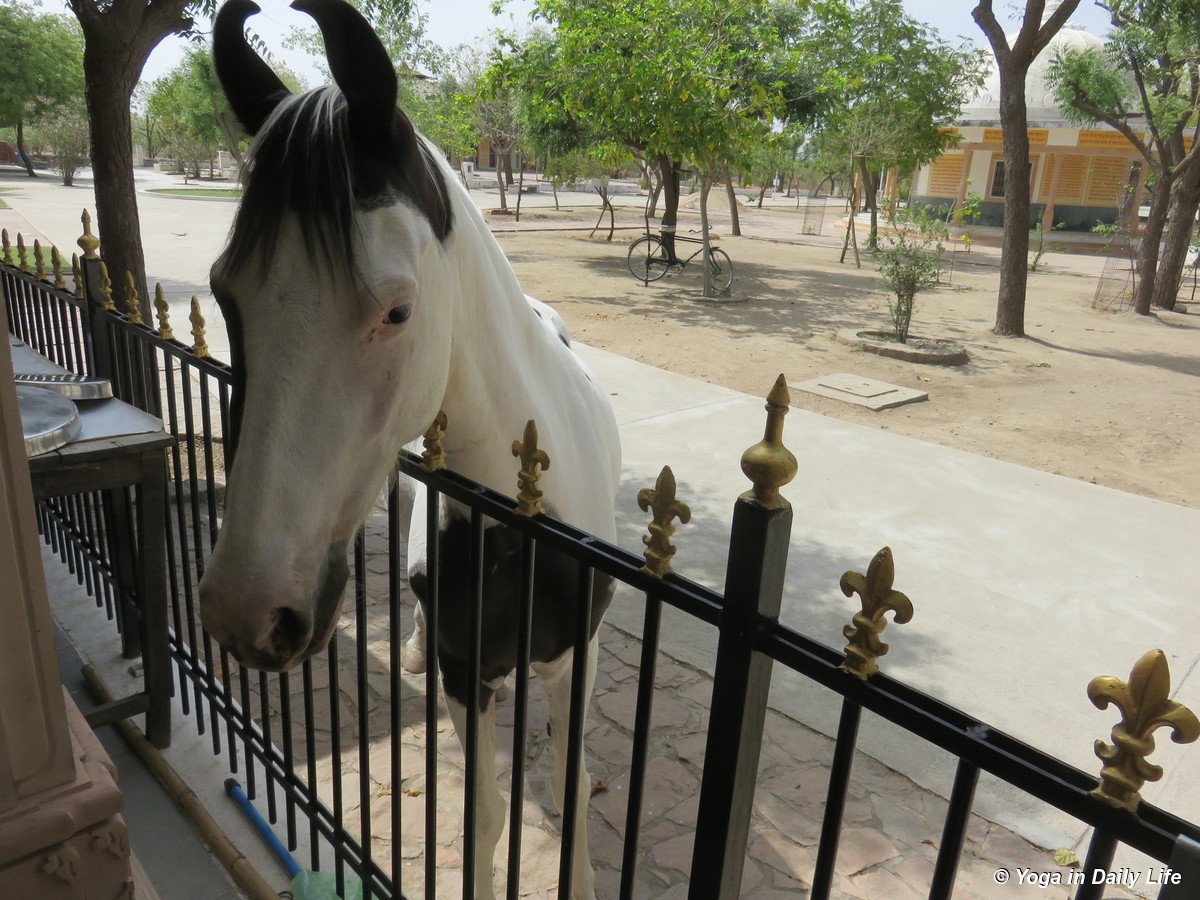 Sangam hoping for something nice over the kitchen fence

So, food for thought for April – you are what you eat, you eat to live, and a lot of our eating habits are learned behaviour and not even culturally relevant to where we are living. In Rajasthan, during this season we use food and drink to cool and rehydrate our bodies. Watermelon juice or whole and cucumbers and buttermilk are life-saving. Tamarind sherbet is soothing and sweet and cooling and very pleasing to the taste buds. When we give a 'cold shoulder' to Mother Nature – she who is on our doorstep offering her Divine Gifts into our hands – we are signing away our birthrights and our right to good health, to mass-produced soul-less produce. It is worth thinking about this and asking ourselves honestly: what is my role, what part am I playing in the change that must eventually come for all? 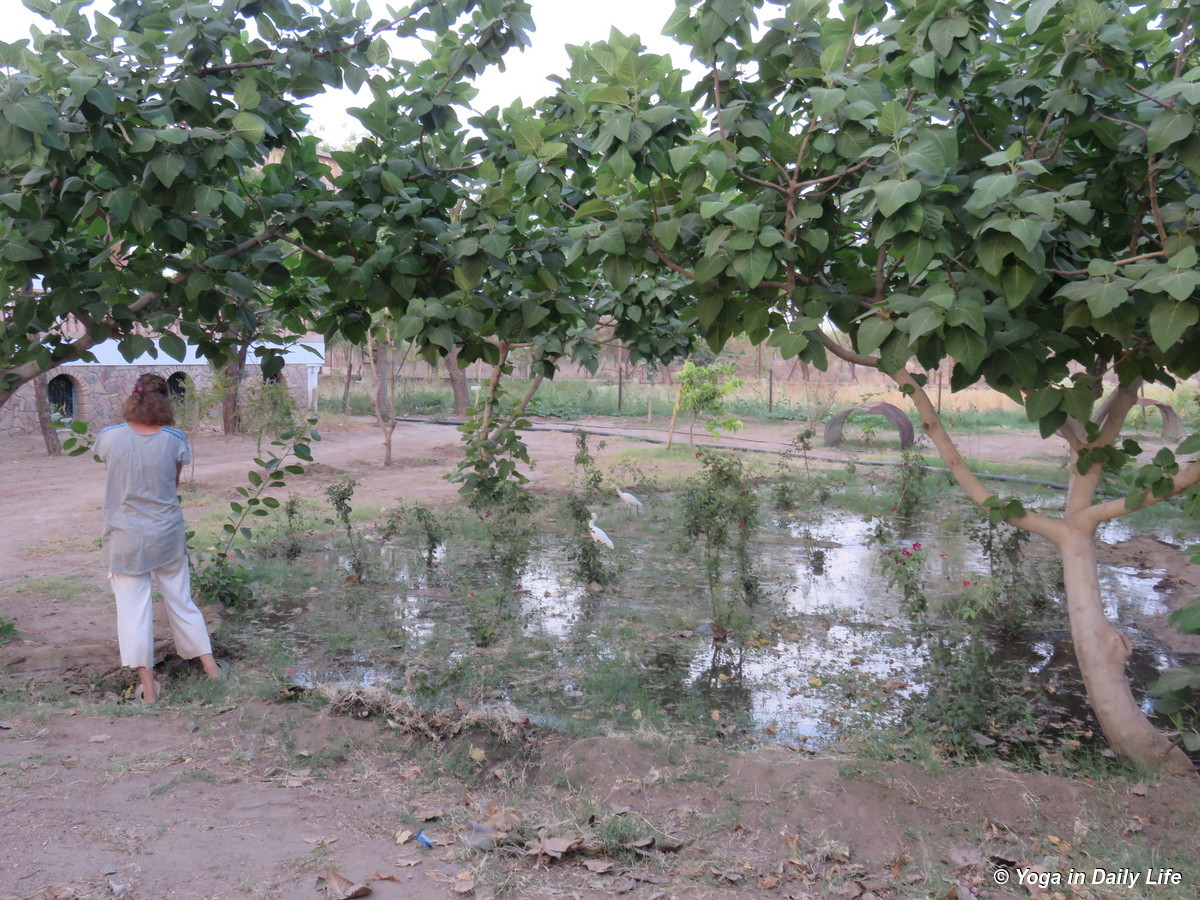 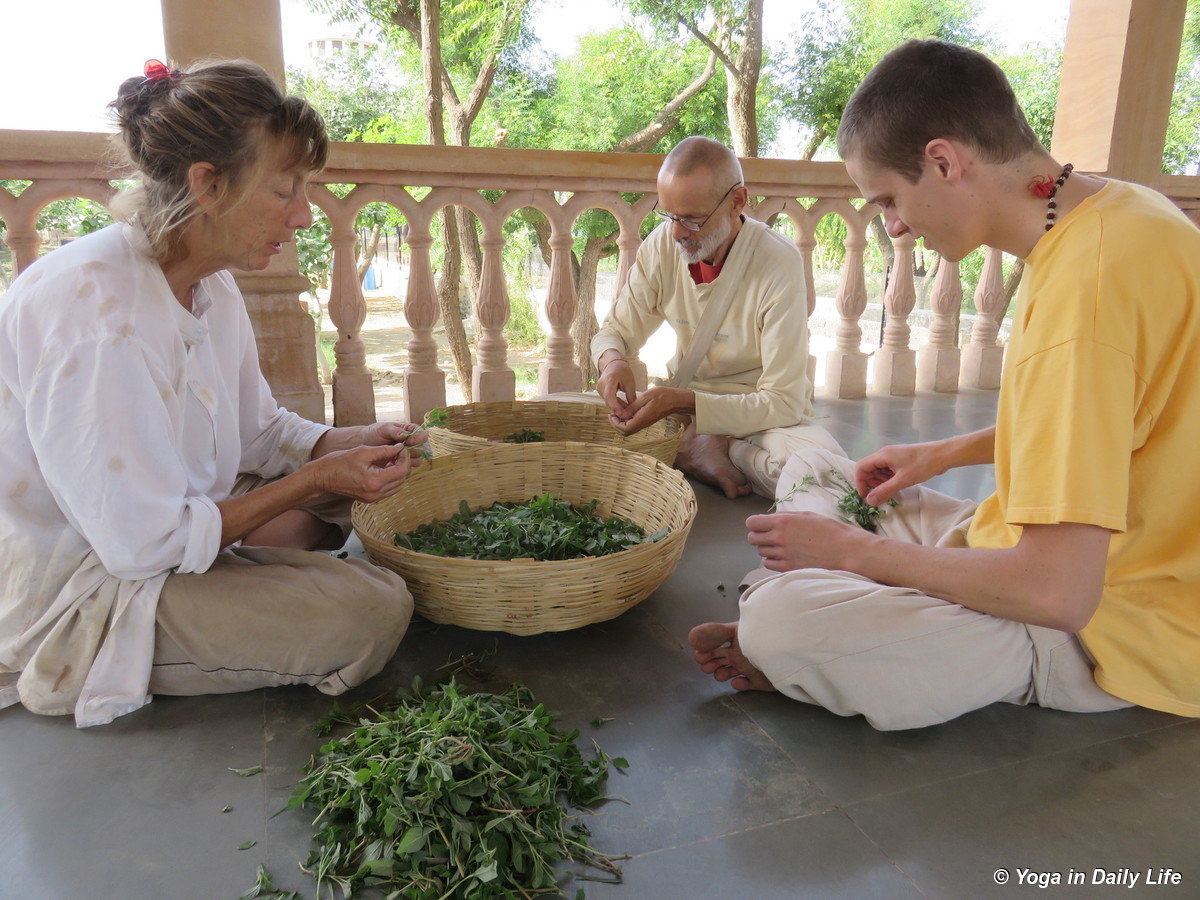 I wish you sweet summer European fruits and bee-filled blossoms. Please support your organic growers, meet and talk with them, and always have your hand tools ready and sharp should they require a little help with their monthly weeding and pruning battles; and encourage them to diversify and to keep faith in their work – if this faith is broken, then everything will be. 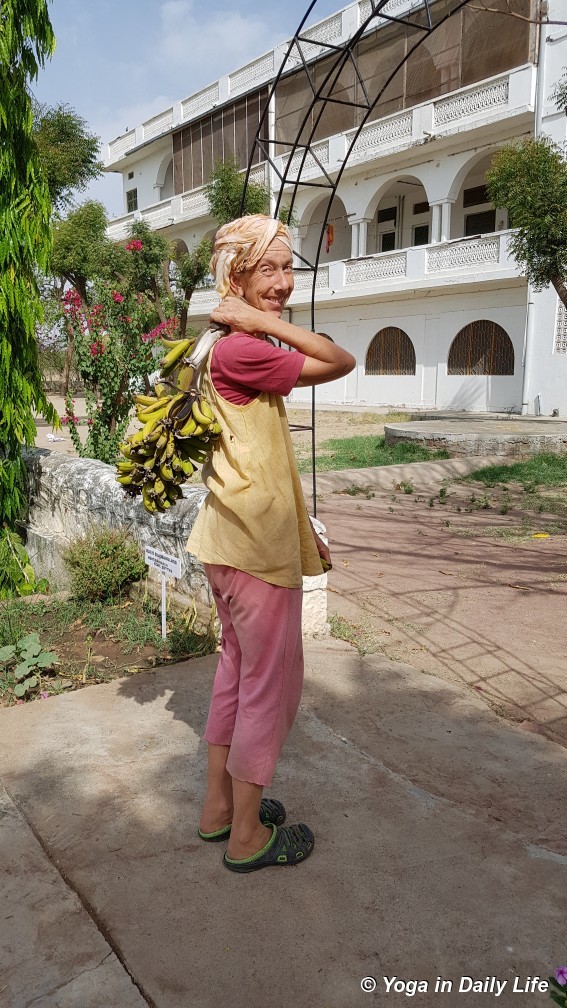