Monsoon predictions in June were that the monsoon would most probably not reach the western districts of Rajasthan until the last days of July and that most of the rainfall would be in August.

True to this forecast, the real rains – with the exception of one heavy 35mm downfall on the night of the 6th of July – commenced on the 28th and continued unabated for eight hours giving 90mm of rain! During the 29th to the 30th, I left Brisbane and observed heavy monsoon clouds looming over the green hills that stretch out next to Hong Kong airport. While a second heatwave roasted Europe, there was widespread flooding in Bihar and other areas of India. 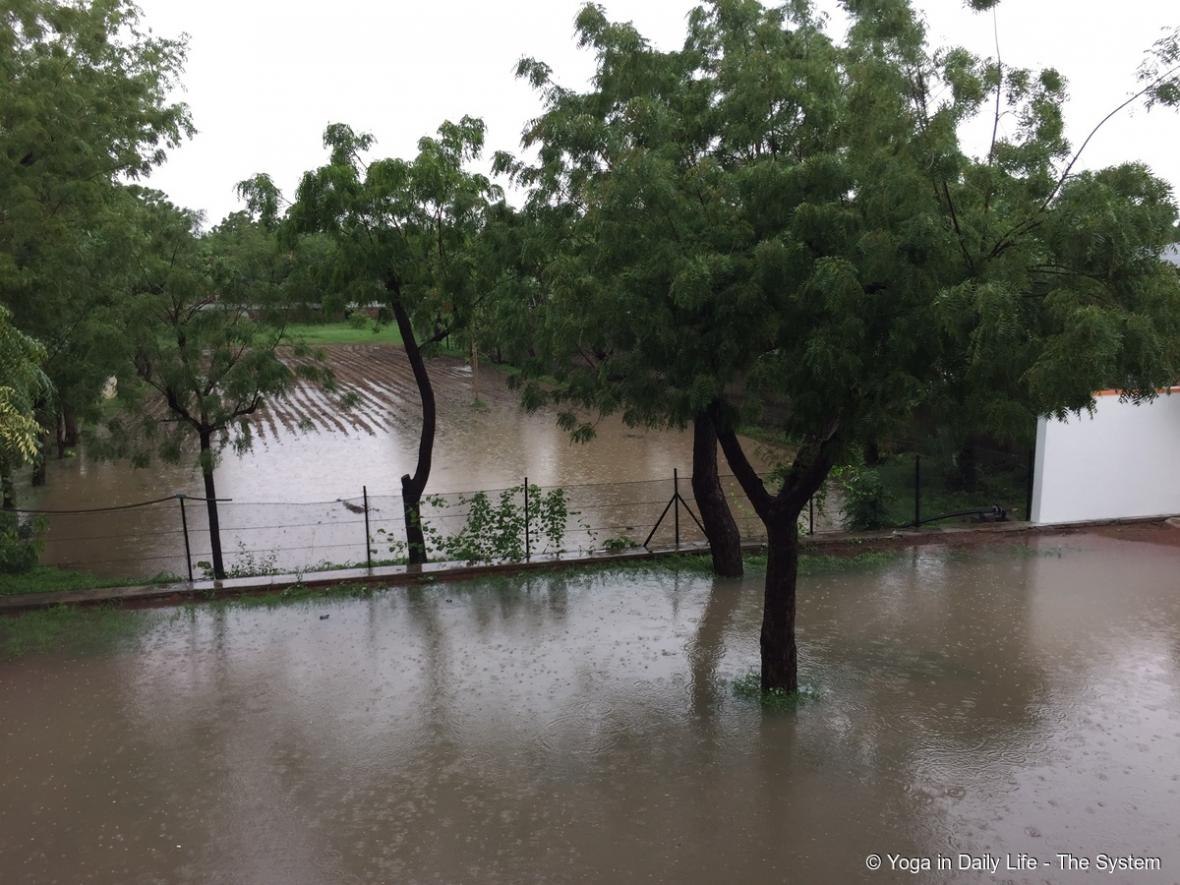 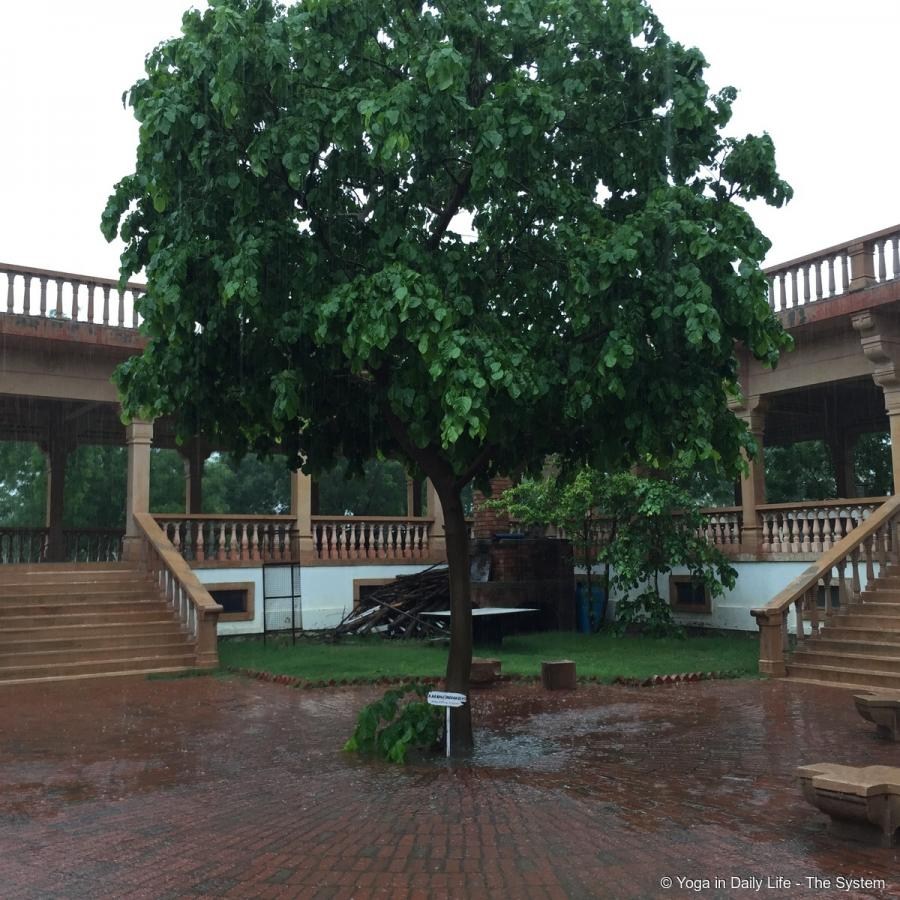 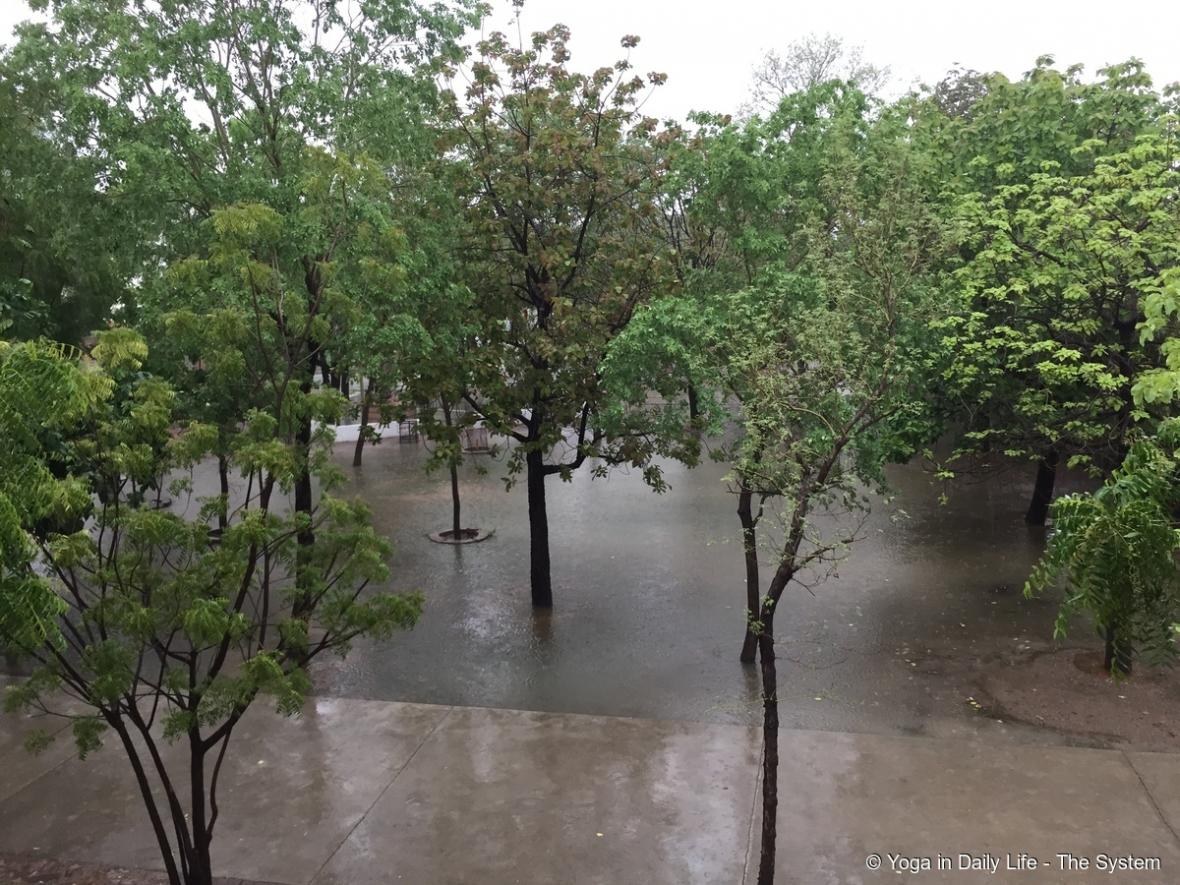 My garden helpers – Parsi and Dhapu – have now been faithfully holding the fort for two months. Friends had sent photos to show me that guests were active in removing weeds from the Shiv Bagh and that pumpkin seeds probably still needed to be planted.

India – its culture and colour, organized chaos and heat felt like worlds away from the high rise city culture of the Brisbane winter, where the uniform is largely black and white with shades of grey. I finally returned to Jadan in the late afternoon on the 31st. 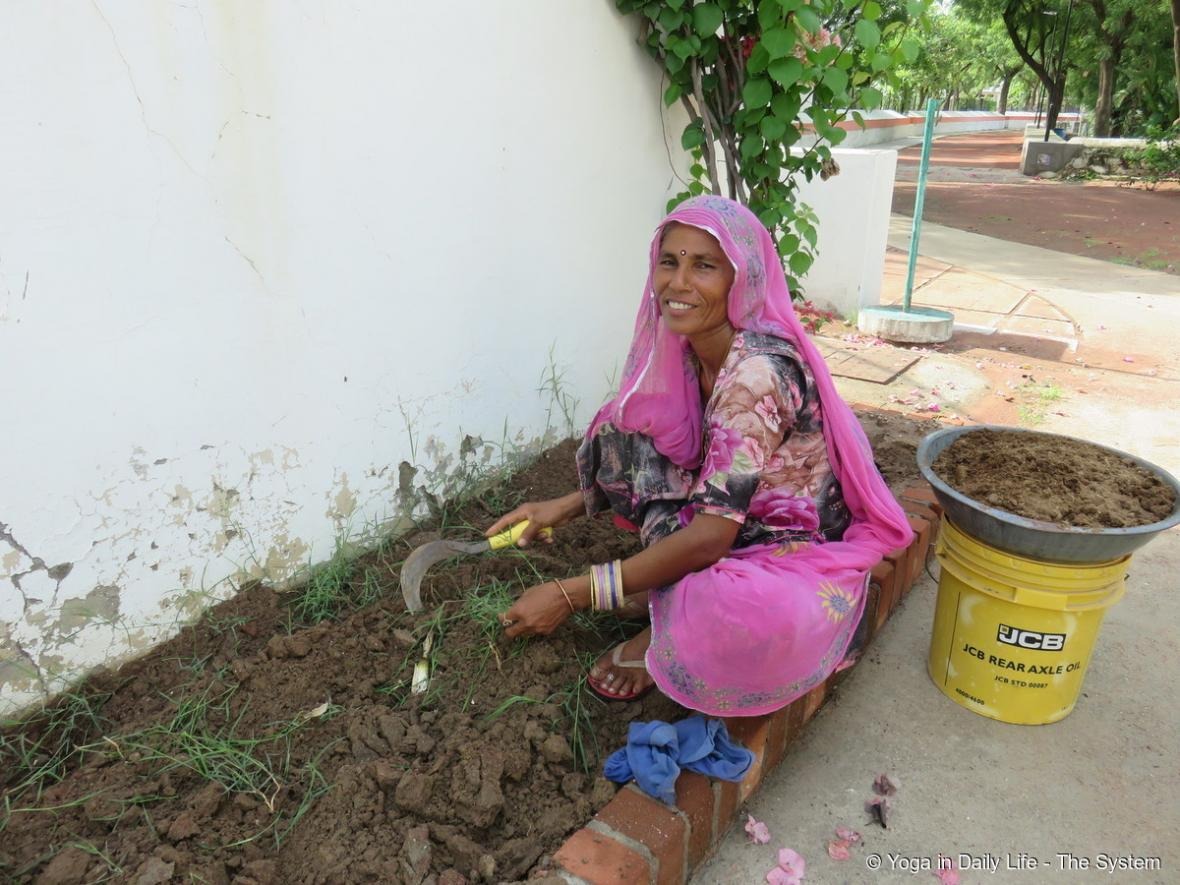 There had been eight hours of continuous rain on the 28th and three minor rainfalls before that and monsoon weeds were sprouting up everywhere. In spite of efforts from the karma yogis and guests to clear the Shiv Bagh weeds – they have become out of control and so Gurudev has made the decision to close this area and make a new ornamental garden in the Big Garden, in the area where from 2002 to 2011 we had an organic rose garden. Deeparamji and his workers have already prepared the area and now we need to decide what kinds of plants should go there. 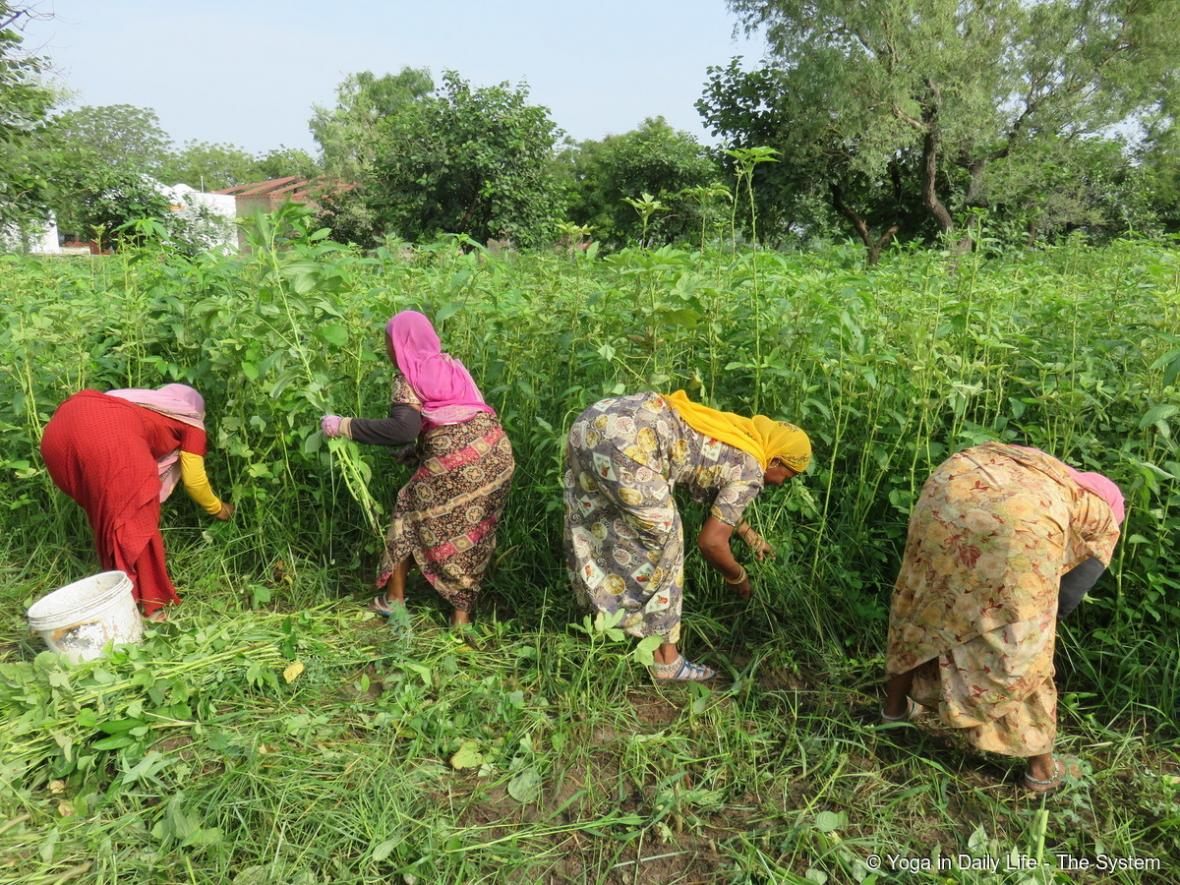 To date, the lemons have not yet turned yellow, but some of the summer sabji is still producing – bhindi (okra) and guar phali (cluster beans) and even some spinach and the chili bushes, cultivated from seed over the summer, are standing more than one metre high. The chawli (beans) behind the cool room has been producing 30kg daily and the lauki that we planted in the Shiv Bagh has to date produced more than 60kg of gourds.

Our papaya seedlings were unfortunately eaten by Lakshmi and Leela (our calves), whose taste buds have developed and they are eating not just grass and hibiscus leaves but other plants now!

On the morning of 3rd of August, the sky was heavy and there had been lightning all day. At breakfast time the rain came down steadily and around 11.30am a huge and torrential downfall came, with deafening thunder and the talab (reservoir) inflowing became like Niagara Falls – a sight that we all long for.

At 3 pm it was still raining lightly and the feeling was that one more rainfall like this would ensure that the talab would be filled to at least 50% of its holding capacity. And indeed – by midday of the 4th of August the level had reached 5.5 metres and the water was still running. 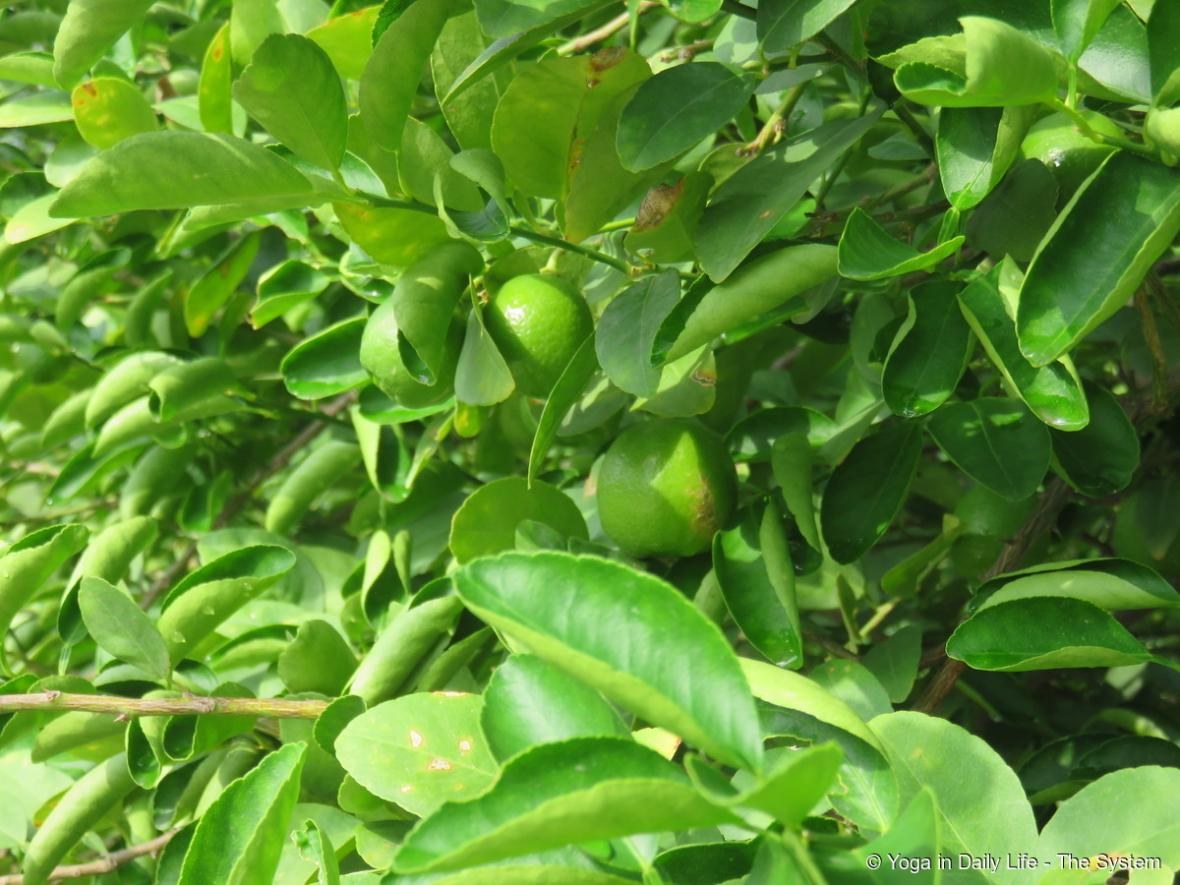 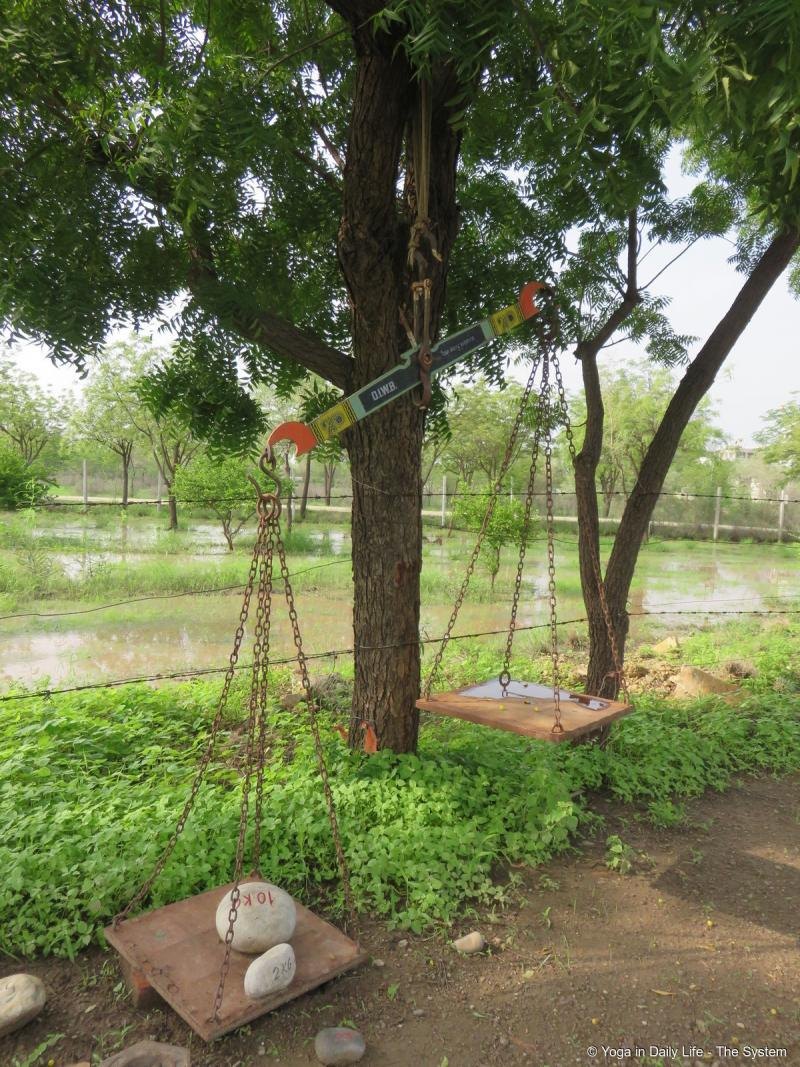 On this day too – between rains – the cutting of the tall guar phali plants started. The season is over and the plants will be loaded into a trolley and taken to our cows in the new Gaushala. Now all around the gardens, areas are either flooded or soaked to capacity and so new plans will be delayed until the soil dries out somewhat. In the meantime, I transplanted the ornamentals purchased in Sumerpur earlier this year, as that area is now too overgrown with Bermuda grass and nutsedge, and the small flowering plants are overshadowed by guar phali, summer bhindi and some cowpeas. Over the fence, the cowpea/chawli phali plantation produces about 70kg of beans each week and some lauki has been planted in the area where tindi was attempted in May. 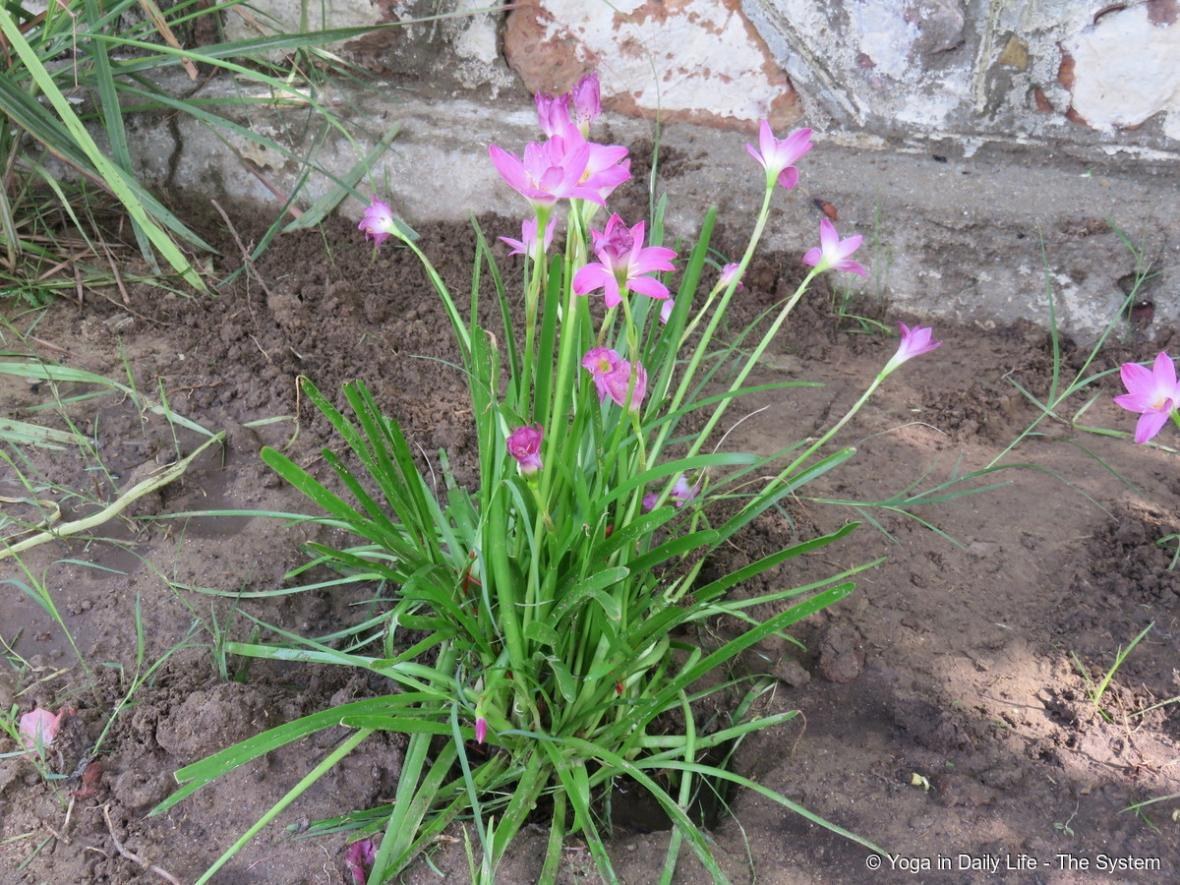 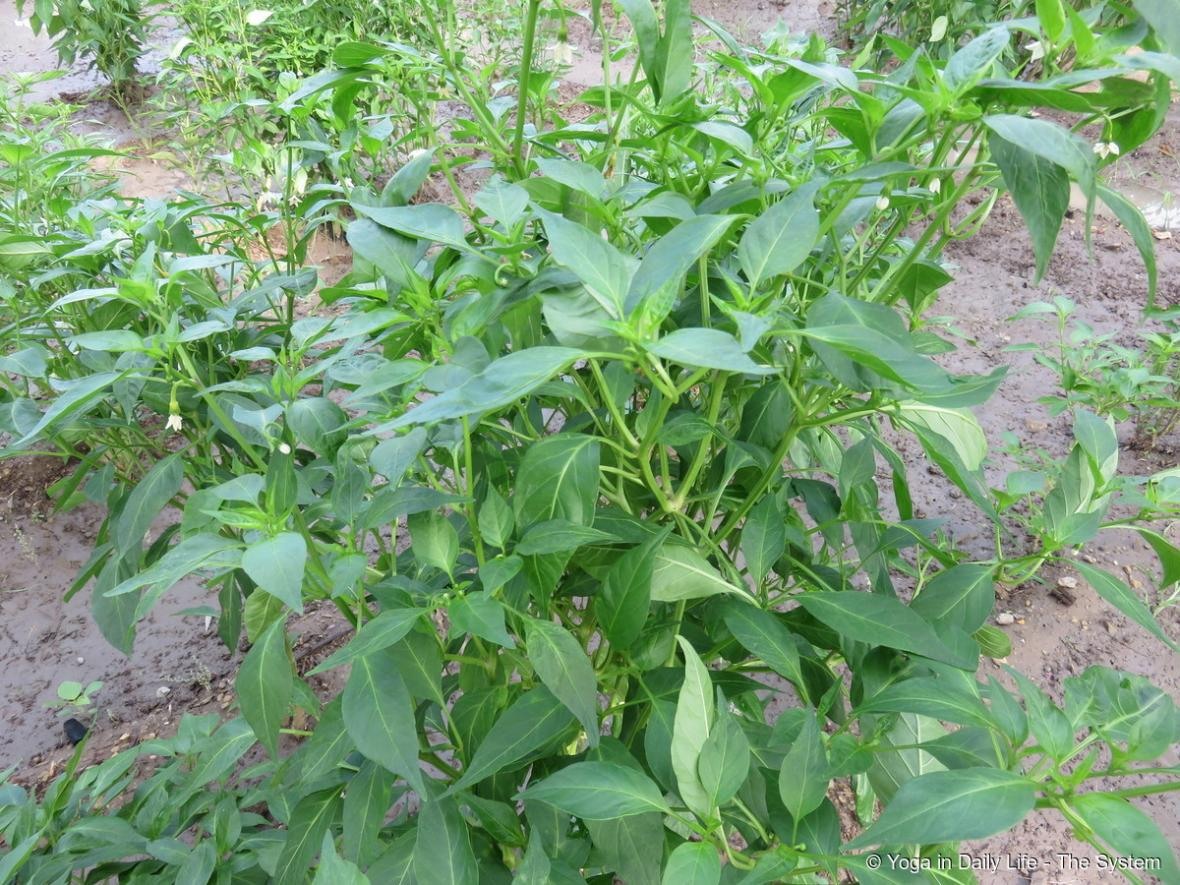 Many of the trees and shrubs in the Shiv Bagh are overgrown and so these will get well pruned in August. It is not yet known whether the entire area of the Shiv Bagh will be cleared but I have a mental picture of myself and a rotary tiller churning up all of those troublesome greens! The feeling of being back – especially as the rains are coming – is something to share. The whole ashram is green with fresh shoots and the exhausted plants and trees of the summer are not to be seen any more – there is just so much prana in this ashram and I felt so welcome when I came back. After a few days, one is back in the flow of things. I would especially like to thank dear Amrit Bindu and Narayani and other helpers, for running the Organic Storeroom while I was away. It was great to return to its order and cleanliness – great work sisters!

The cow babies and puppies have had a two-month growth spurt and are doing well. Singh – the boy puppy – has gone to Sri Alakhpuriji Siddha Peeth near Khatu for his first guard dog posting. He is happy and in good hands.

We await the next deluge – heavy rains have now reached Delhi and Jaipur and the forecast looks promising but that is never a guarantee in this rain shadow. On this Wednesday afternoon, the sky is low and heavy – in 48 hours the talab could be full. Time will tell...

All the best from
Jadan Ashram and
Puspa Devi 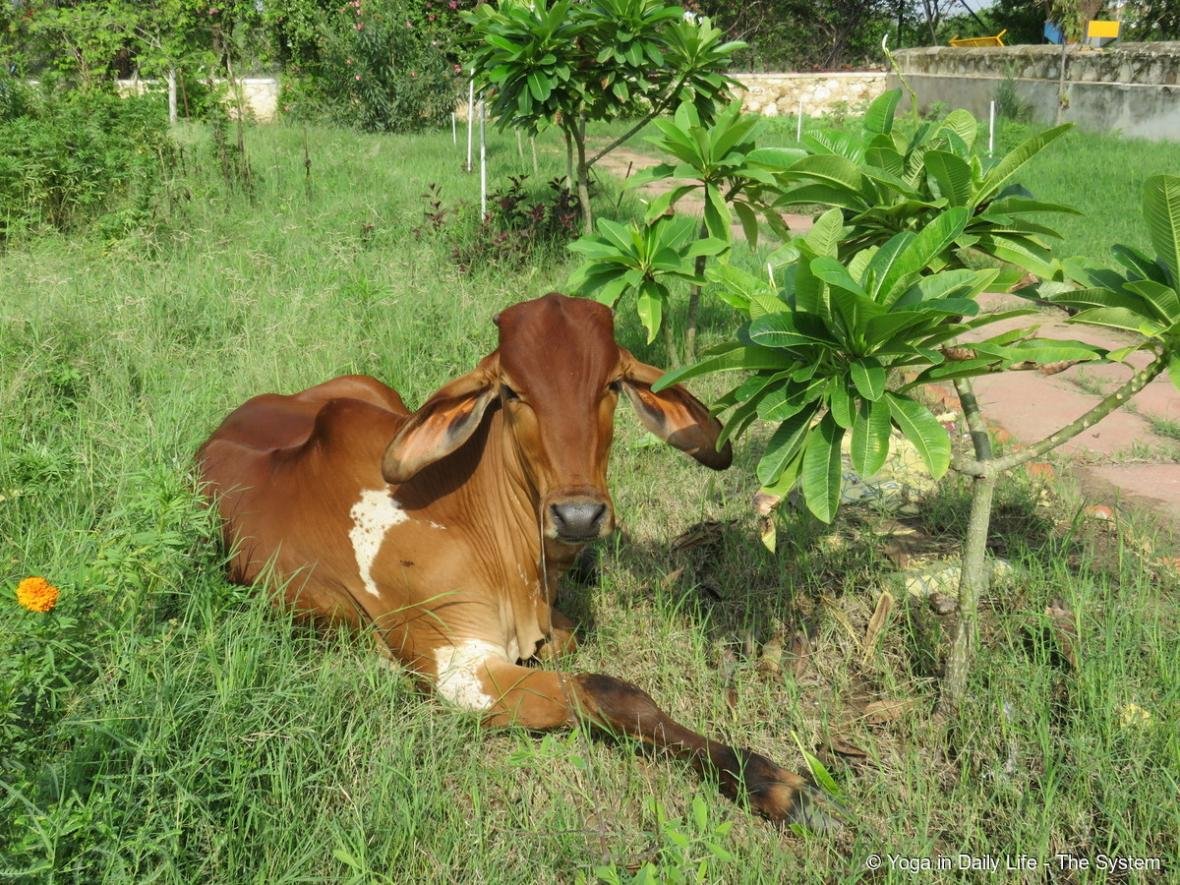