The first 3 weeks of June were a continuation of the horrendous heat wave that India has experienced this year. Then out of the blue, a very strong wind started to blow day and night, and finally on the night of the 24th, around 10pm, we received the first significant rainfall that we have had for 10 months.

Usually after the Solstice on the 21st – the morning of which we were doing asanas beneath our tin shed to celebrate the 4th International Yoga Day – it is time to plant the first of the monsoon vegetable seeds. So we started to clean up some areas of the Shiv Bagh where the soil has been resting for some time and by the end of the week, had beds prepared for chillies and cowpeas. 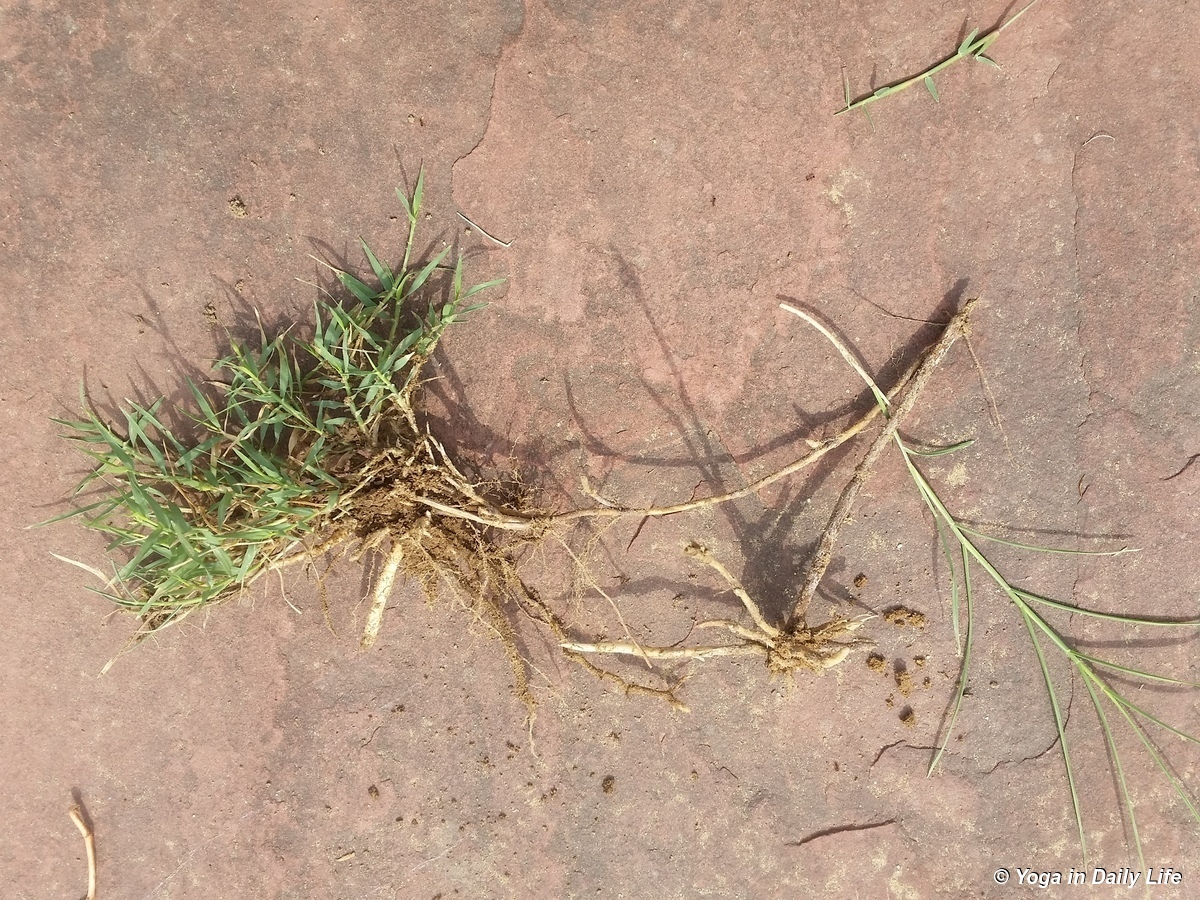 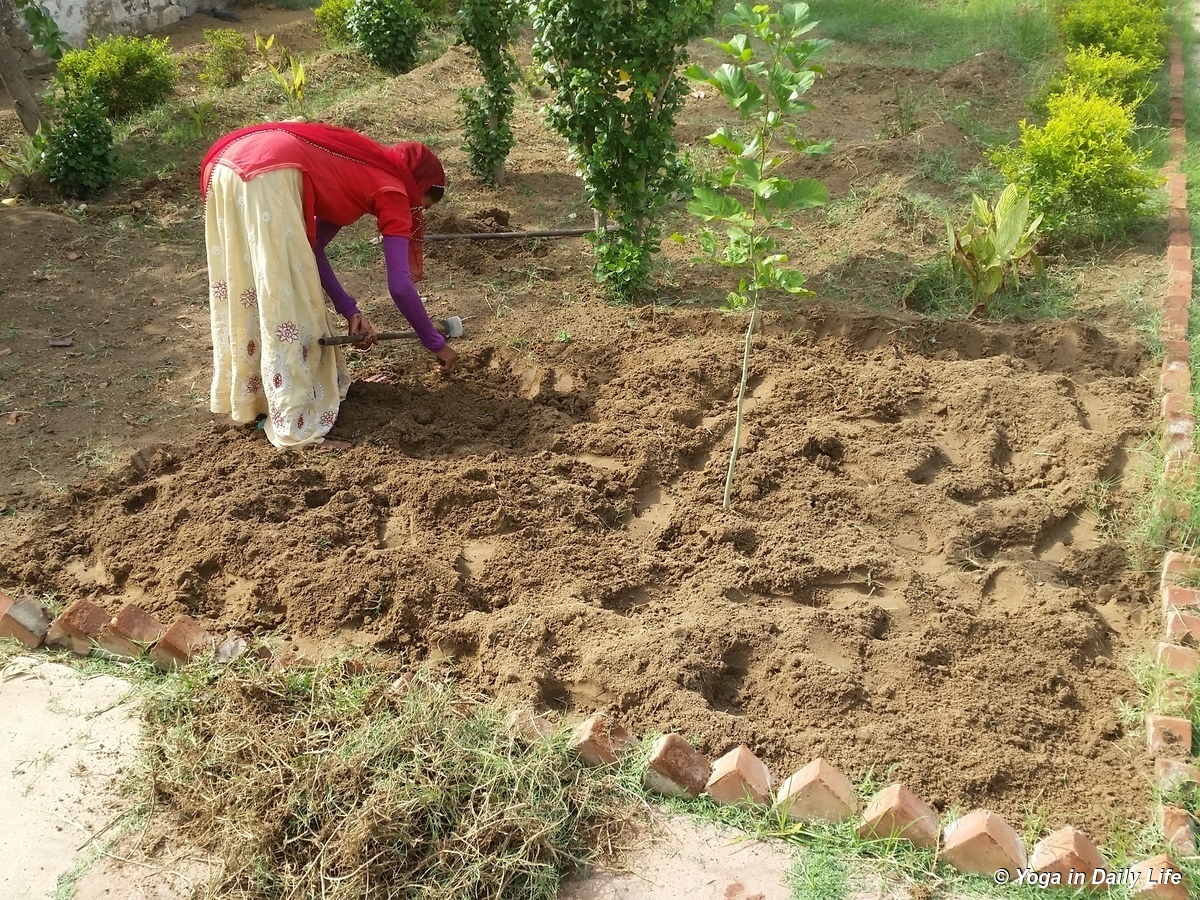 Planting of chawla and mirchi took place after a week of preparing the soil. In the middle of the Shiv Bagh where the lawn used to be, we planted seven rows of chawla, on soil that had been mulched well and rested for a year. A variety of cluster bean called Mindia guar phali was sown where the moong plants were last monsoon. We dug 2-metre lines for these latter seeds and then filled them with compost after removing grass roots - in this way, the seeds have the best start that they possibly can.

Preparation of vegetable beds for seeds often makes me think of giving good nutrition to an infant for the promoting healthy growth of bones and teeth – the essential building blocks (roots!) for a strong body. The first cowpea (chawla phali) seeds went in on Wednesday 27th and they had already germinated by Saturday 30th! 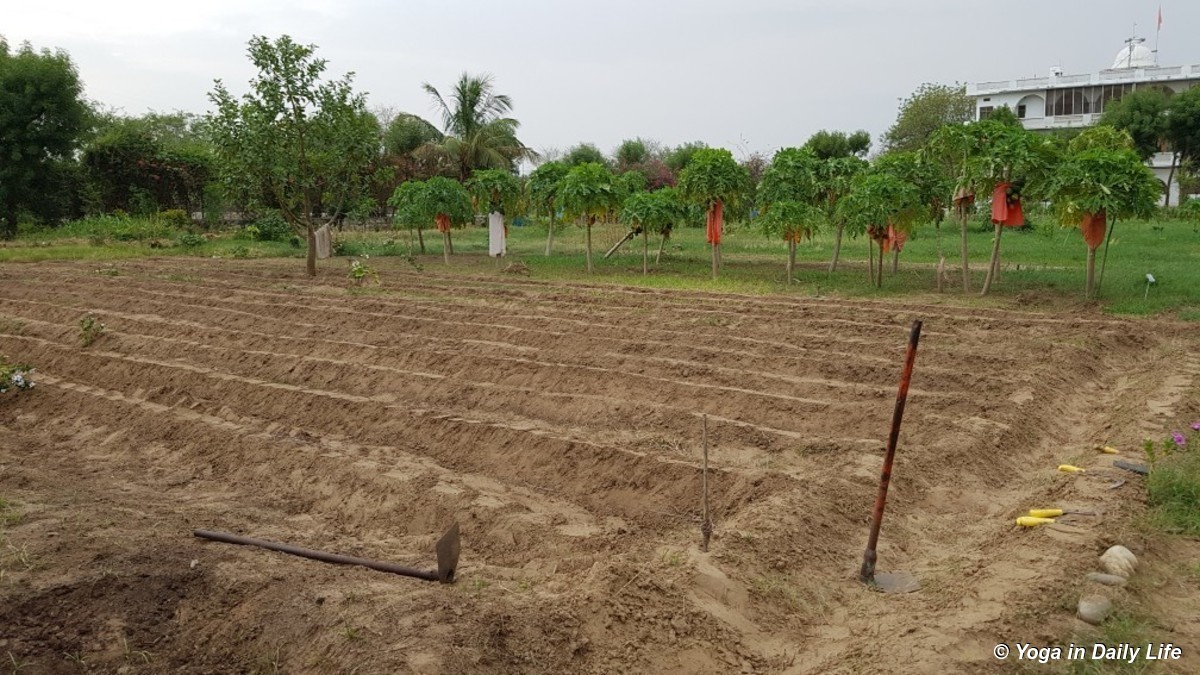 After a few rainy nights we returned to our regular irrigation schedule in order to nurture our new seedlings. This year we shall try a variety of chilli that Swamiji brought over from Hungary – its appearance is not unlike a red cherry! 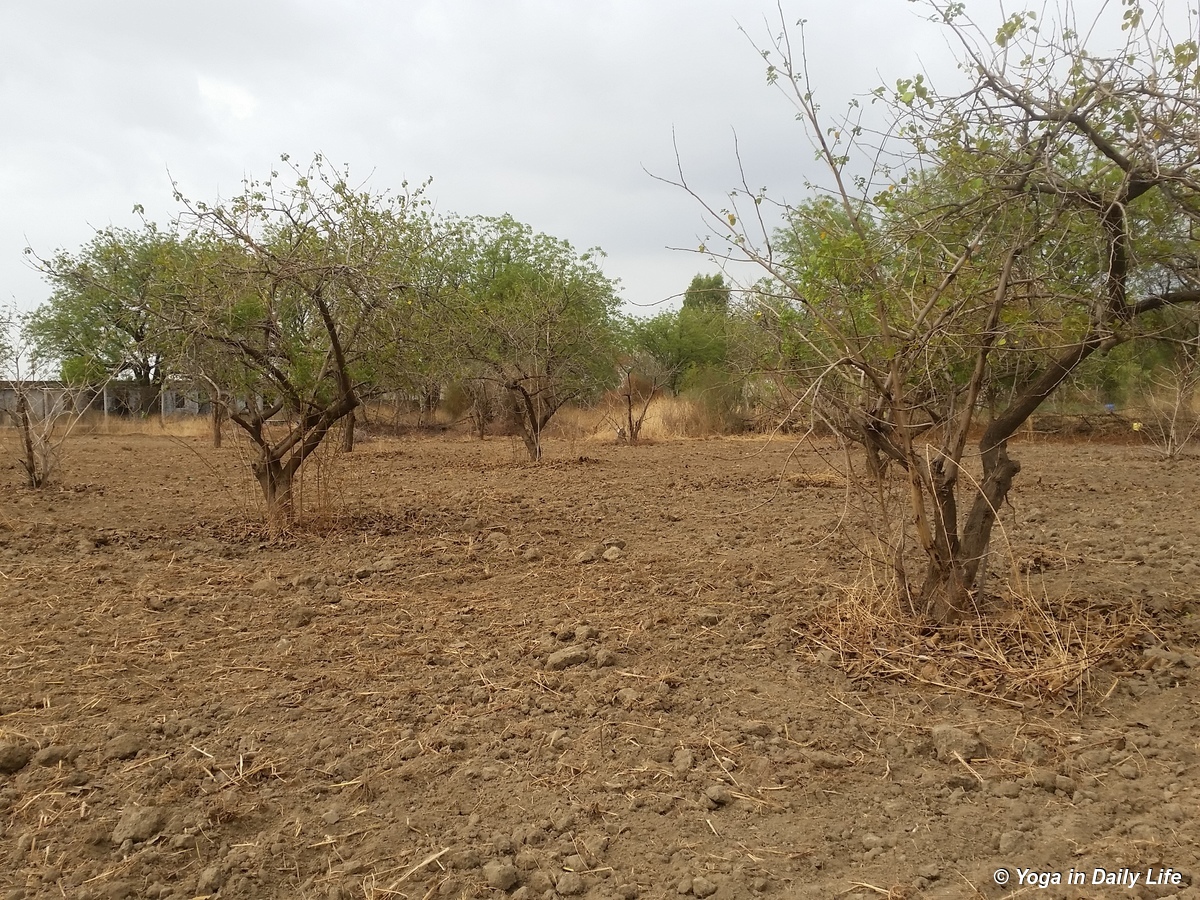 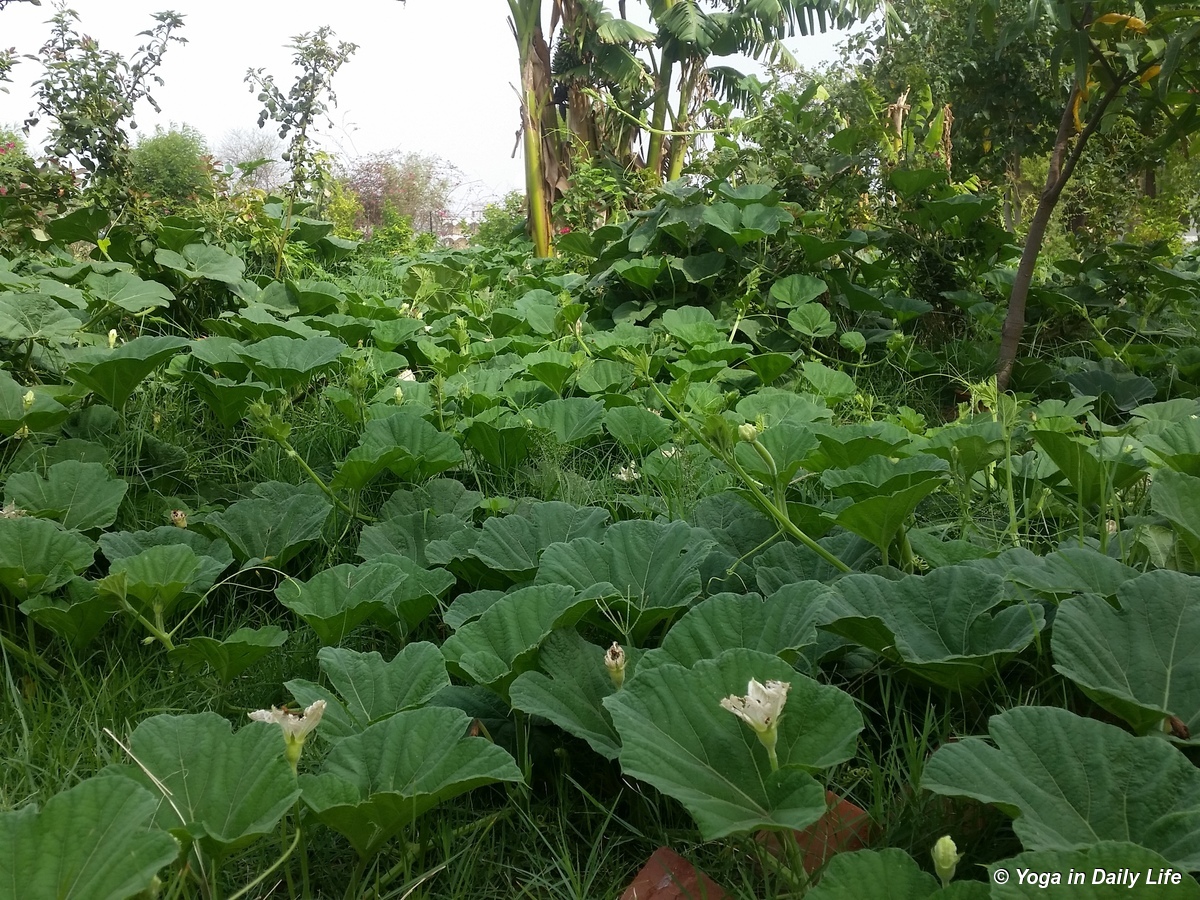 In the Big Garden, the gunda plantation – which has not been touched since March 2017 – had a huge makeover. First our cows went inside and enjoyed some dried grasses, and then the remaining brittle grass stalks were pushed to one side with the culti and burned. The disc plough spent four hours moving the earth, and then more hours were spent ploughing out the hard lumps of soil into crumbly friable earth into which we planted corn and pumpkins and a little sesame. On the western boundary is a space for vegetables that should be planted during the first week of July. The ladies started to repair the furrows in the area on the 2nd of July and planting is due on around the 9th.

This month we continued to replant the okra in the Madhuvaani garden and managed to weed all 12 beds with some help from the karma yogis. After a little rainfall, the flowers of this interesting variety of hibiscus started to bloom. We have only harvested 40kg of bhindi (okra) from this area since April, so it is not a huge success, but at least the plants may survive until October or early November, since okra season runs from March to November. 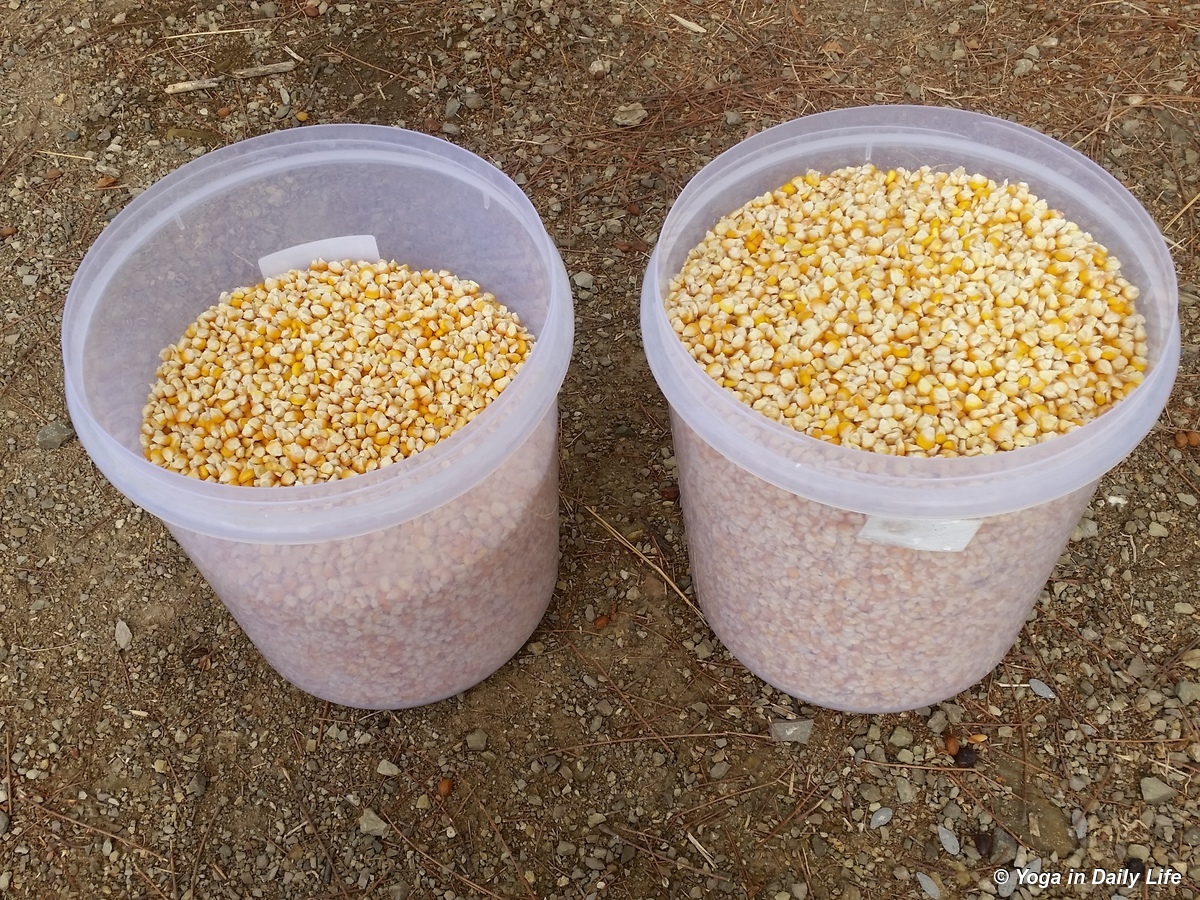 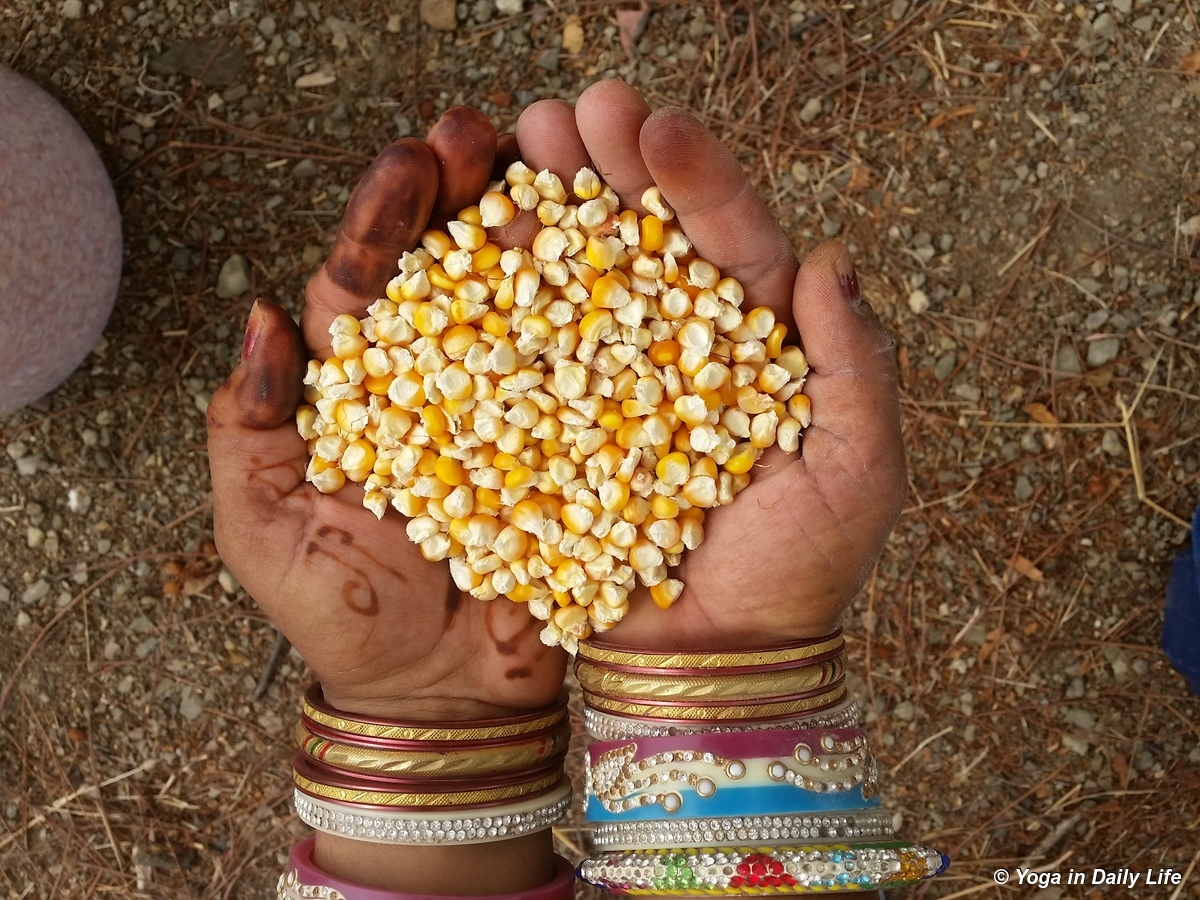 Once a little pre-monsoon rain starts, then by 8am the air can become very still and stifling, and one sweats intensely. Sometimes the wind blows and then your own sweat cools you down, but prior to storms and monsoonal rain it is more likely for the winds to drop. A lot of weeding and bed-making will be necessarily before the monsoon proper starts in mid-July.

This month we did manage to clear large areas of weeds with the help of some karma yogis and our new stable boys, who come each day to cut or harvest grass for our horses. However, there is a lot outstanding and so we need to have our double-bladed khurpas (sickles) sharpened and discover as many shortcut techniques as possible, such as removing cement bags used for mulch last year to open up areas that now have beautiful compost on them, and to place the bags over weedy areas that now need a rest, or to keep the weeds off a pathway. This huge ornamental garden is slowly taking shape. 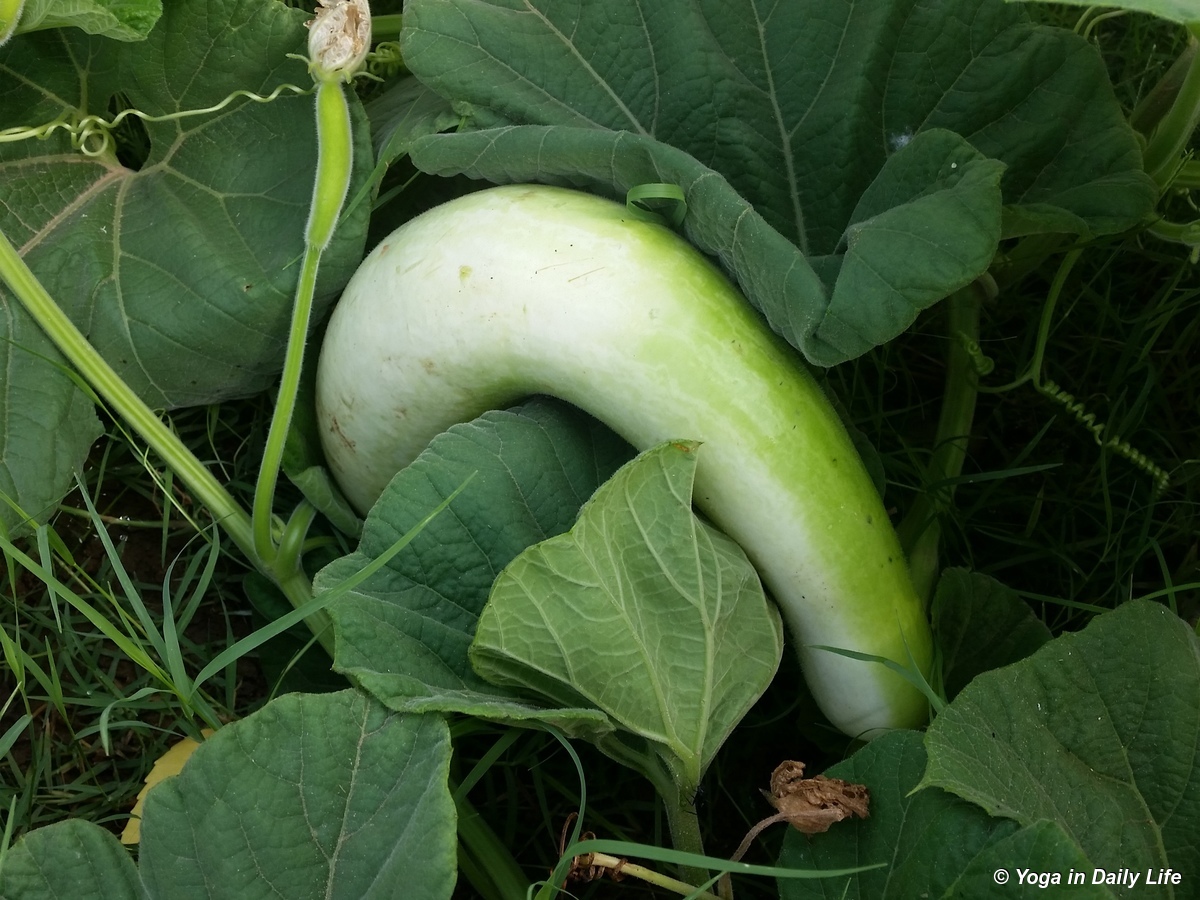 The lauki seeds planted near the banana line in the Shiv Bagh had a huge growth spurt this month and started to move eastwards, covering parts of the footpath – we harvested 30kg from this area this month and nearly 50kg of papaya that are unfortunately, as it turns out, a hybrid variety and do not appear to have any seeds inside to save – but they are nevertheless sweet and juicy once they ripen and soften.

95kg of produce was harvested this month and irrigation was 50% less than May and now hopefully the temperature will remain below 40 degrees, even though the humidity level will go through the roof!

The 2018 monsoon has been predicted to be normal, which means good. It will be so great to see all of our fields become emerald green again after so many dry and mostly scorching months. This year we did not prepare any saplings to plant, but the ones that we planted in the middle of the Shiv Bagh last monsoon have all survived and the area is starting to look very attractive – and there is still plenty of space to plant flowers and vegetables. I am wondering if our rose bushes will ever bloom again, because since the spring period they have not produced flowers and it would seem that they went into some kind of shock due to the intense heat (yep – I can really relate to that!) 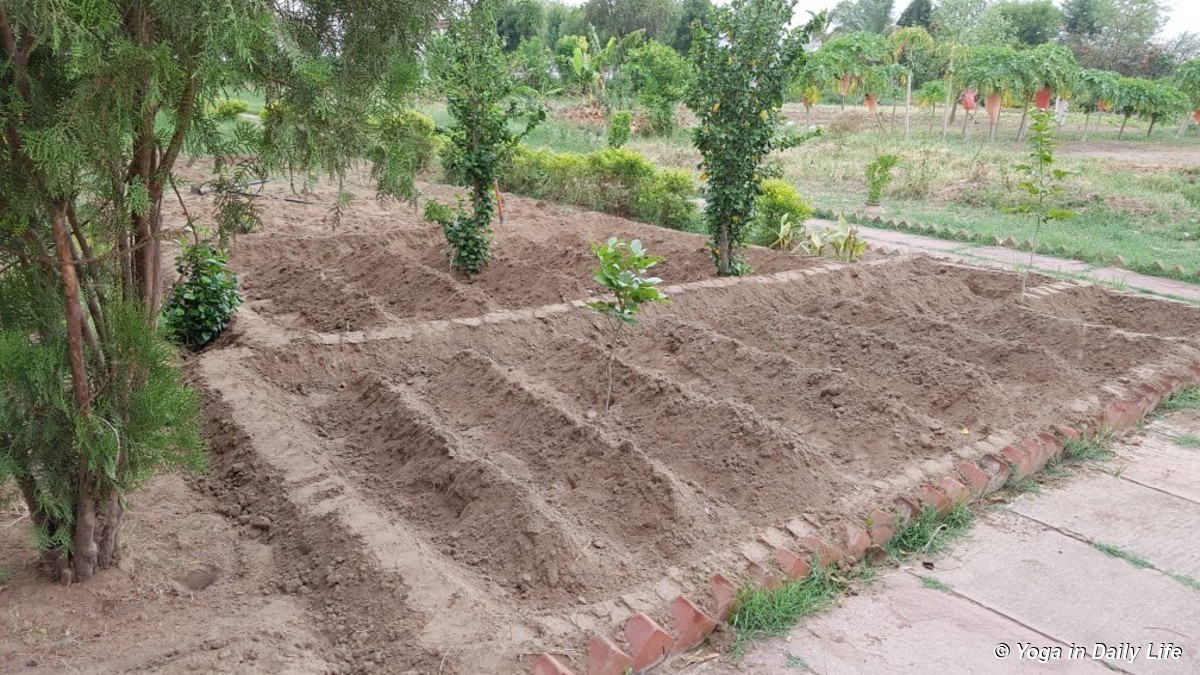 The poornima this month fell on a Thursday (28th) and we are expecting around 35 people here in July for the Holy occasion of Guru Poornima (27 July). By that time, the rains should have started for real, so please remember to bring your raincoats! The talab was around 4.5 metres at the end of this month – so we have consumed only 50% of the rainwater since monsoon 2017, even though it was being regularly pumped to the Om Ashram for making and curing cement and for drinking water. This year a filter system was installed that gives all workers access to sweet water, which they are very happy about.

I look forward to seeing you in July. We have some nice produce from our gardens in the Organic Store and plenty of garden jobs – the usual cleaning of paving stones, pruning and raking, and of course weeding – bring plenty of old clothes for gardening. Our fields are not white or yellow cloth friendly!