Jadan Organic Gardens – the heat of May in April 2019

We've been feeling the heat of May in April – which is just not fair!

So, the trend of late March continued unabated throughout this month and at one point I read a phrase that stuck with me for the rest of this 30-day period, namely that this terrible heat wave that India is enduring, is likely to continue until the monsoon arrives (which can be as late as mid July!).

Survival mode in this area, with its rich culture and awareness towards all living beings, includes: mounting bird feeders and watering pots; closing off areas of water where mosquitoes may breed (they are huge this year); making sure that all of our animals have shady places to rest from 11am to 6pm, when the westerly fire wind that we call the 'loo' can be devastatingly destructive; keeping a strict vigil on our own water intake, so that we do not succumb to the tension of heat and stress; and probably most importantly, knowing when to recognize when a molehill has turned into a mountain!

Vrittis (mental impressions) can be very sneaky – incubating during the dormant winter months and then becoming very attention-seeking once the temperature reaches 44 degrees! Imli sherbet (tamarind soaked and then strained and mixed with sugar) is cooling and gives relief. 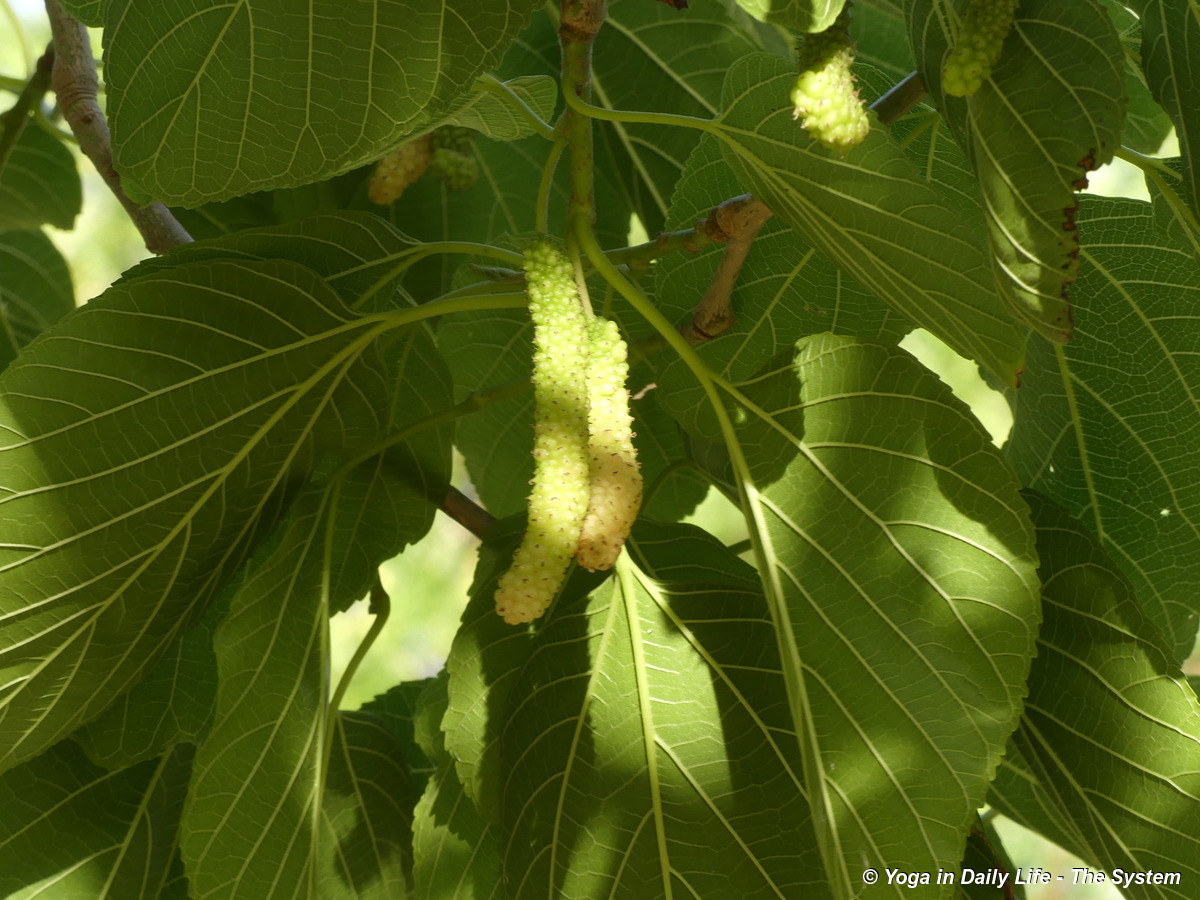 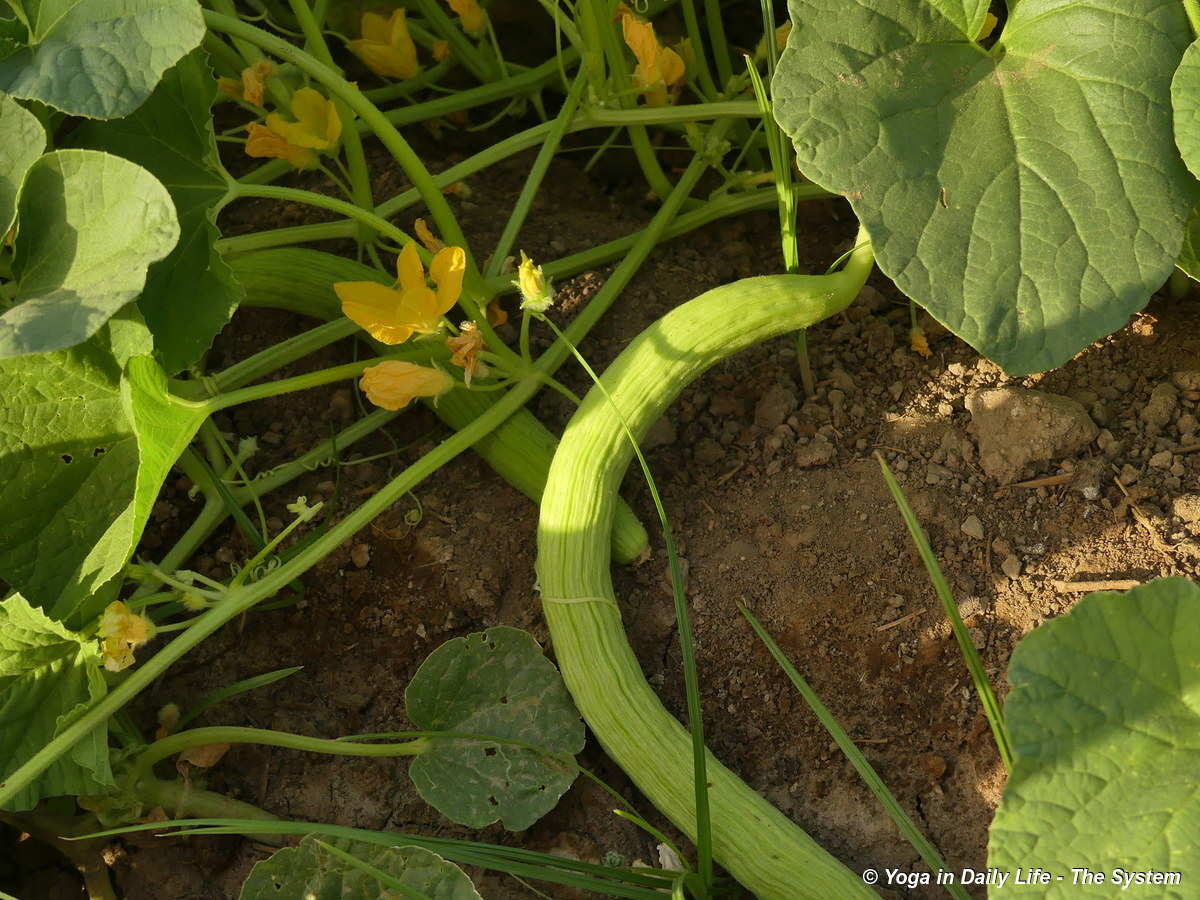 By the 10th of April, our new sabji (vegetable) plantation was looking very smart, as weeding out the nut sedge was well under progress and the growth rate is normal, and the first tarkakdi (Indian long thin cucumbers) were visible by the 20th. Toru (ridge gourd) vines were flowering and even the karela (bitter gourd) is looking lively. Bhindi (okra) and lauki (type of squash), guar phali (beans) and chilli are yet to flower, but the plants look very promising.

In the Shiv Bagh, some tree roots were removed by the JCB and an area of about 124 square metres ploughed and planting with a mix of sorghum wheat and millet. Alongside this, on the 12th of April some amaranth, locally known as chandaliya, was sown. A small bed was prepared for some heirloom seeds of tindi (apple or round gourd) and sponge gourd, as well as some red chandaliya.

On the 19th, we closed our baigan and chilli area which was more than a year old, cleaned the roots out and planted some saved marigold seeds of a large variety that should flower by July, if we flood irrigate them.

Our white mulberry trees offered shady harvest to those who came for their sweet and juicy fruits this month. Some collected the wind falls and others stretched up to search for these slim cream coloured bundles of syrupy sugar. 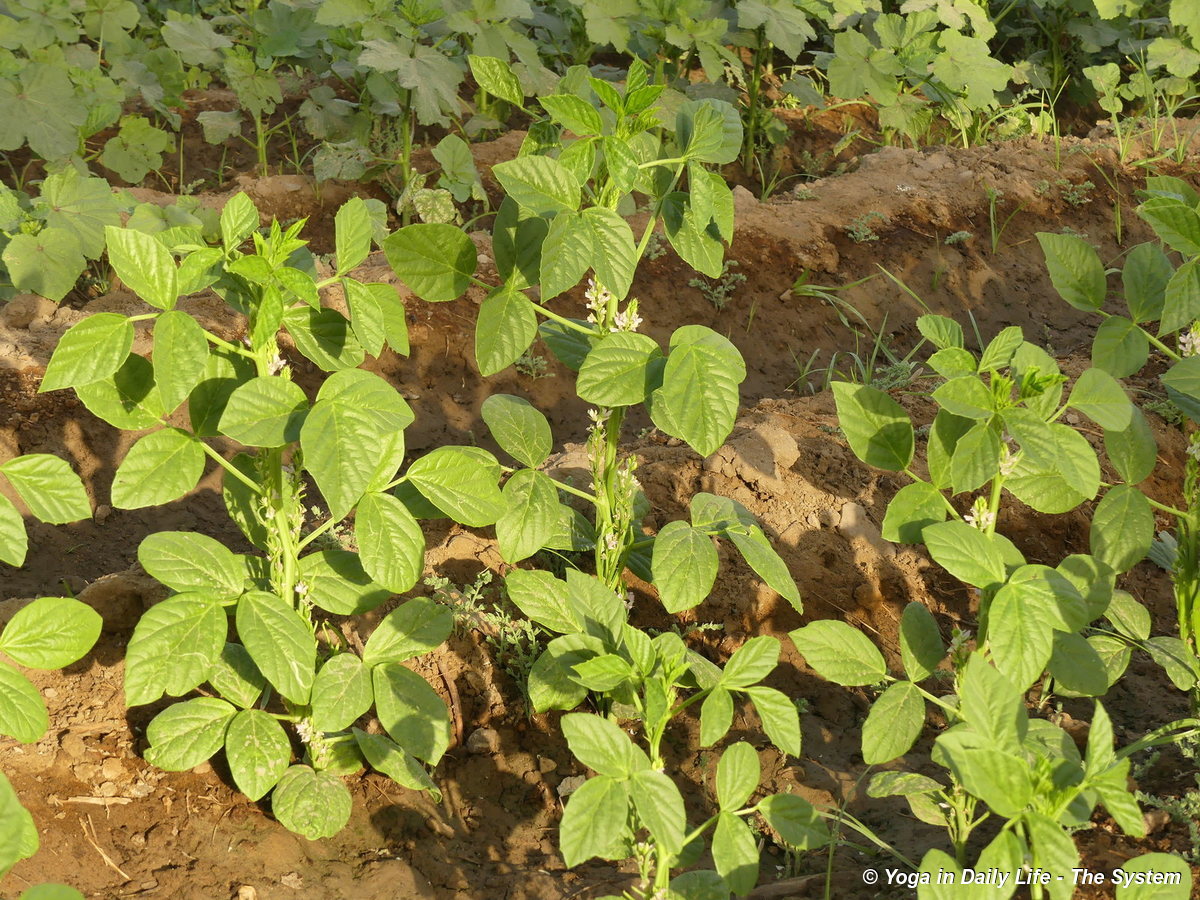 From the evening of the 15th, the weather cooled off as storm activity both east and west started to manifest. That night I was travelling back from Jaipur on a night bus and a huge storm broke near to Beawar and some late rain came to Jadan. The following evening there was a massive dust and wind storm, which blew through the ashram collecting with it bundles of neem leaves and dried grasses, and temperature felt chilly after that. However very little rain came after the howling and gusts of dust. On the upside, we enjoyed several cooler days below 40 degrees and the nights were divinely crisp and cool, and this enabled us to work on areas of the Shiv Bagh which have no shade available. 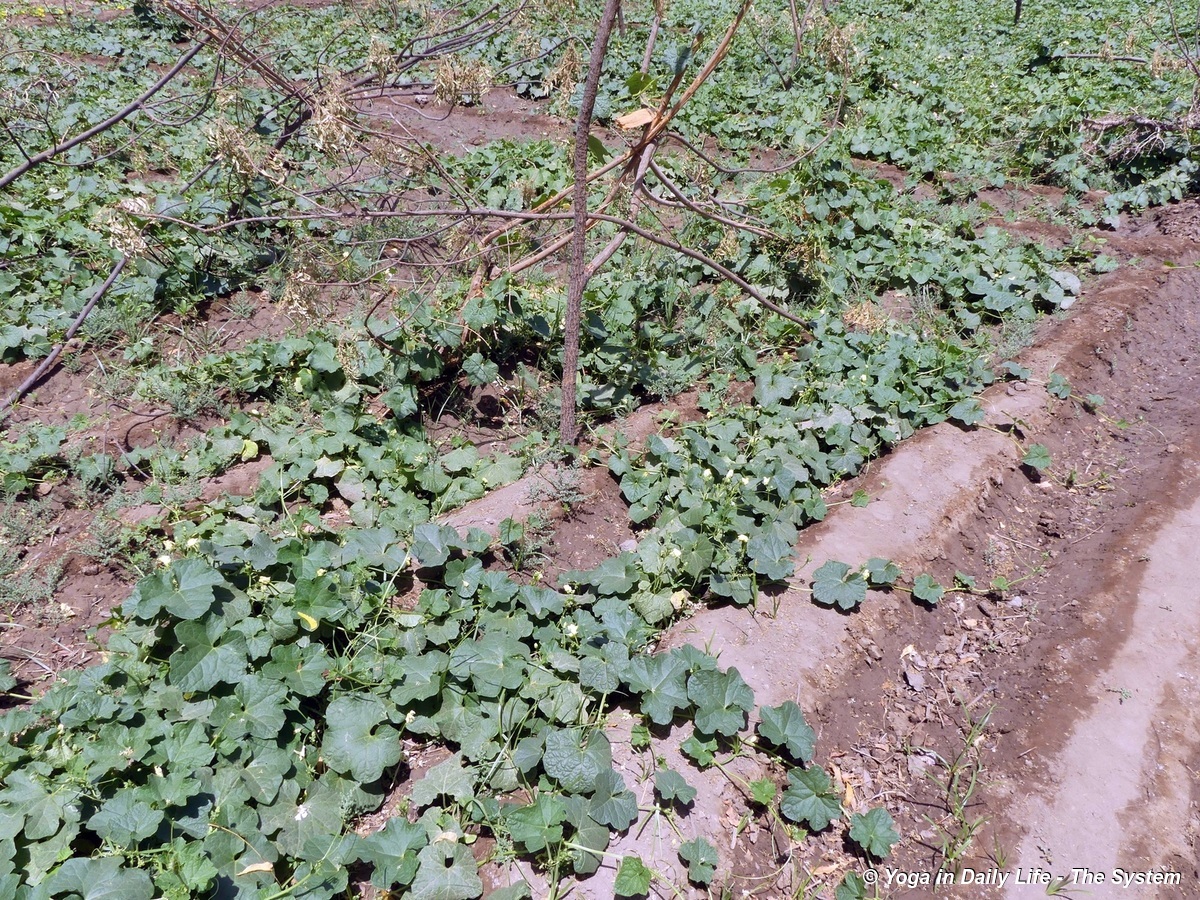 Monsoon predictions for 2019 are already looking grimly deficient for western Rajasthan, but let us see. Sometimes I think that it would be easier to squeeze blood out of a stone than to get normal rainfall here in this area. Even so, and in spite of this drought that we are in, some juicy tomatoes ripened on our plants this month, and there are some bananas slowly appearing on new suckers, although a lot of our tall banana suckers got destroyed by the wind storm. The moringa trees are flowering and getting some drumstick vegetables and even a few celery leaves have appeared in our ornamental garden near the eating verandah.

Other work in the Shiv Bagh has been clearing of weeds and endless piles of tree litter, which slowed down during the third week as most of our neem trees began to blossom – the scent of these blooms gives a divine aroma after nightfall. 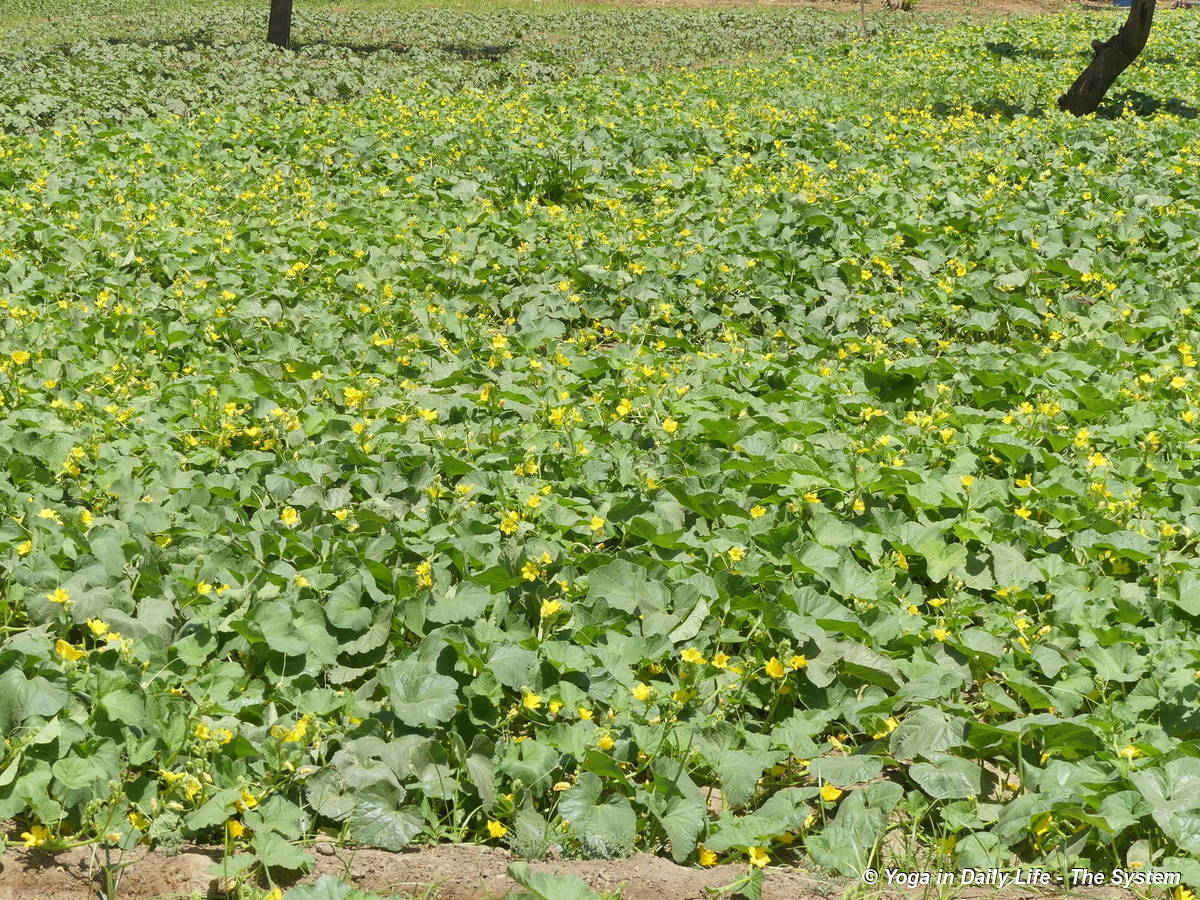 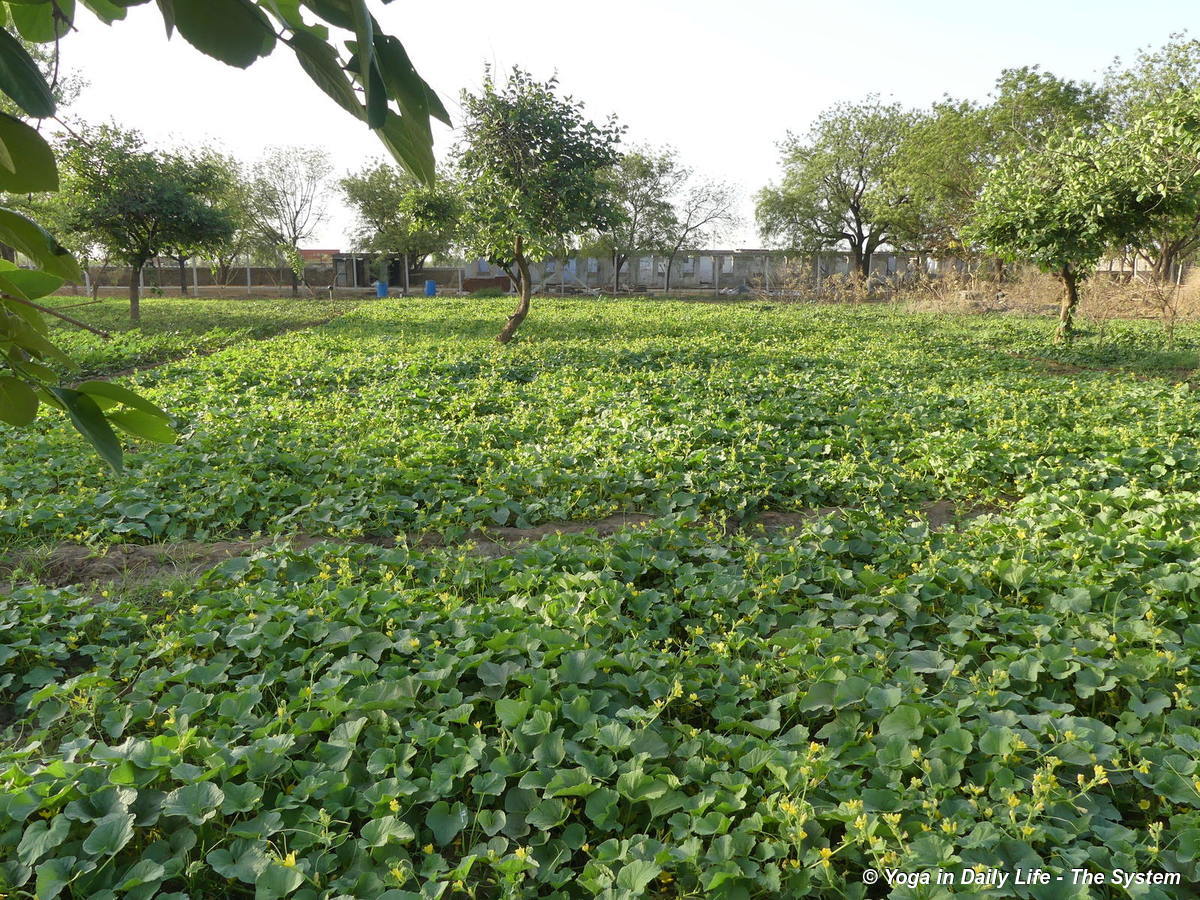 This month the papaya orchard areas were prepared for the seedlings and remaining grass roots removed. These may not be procured before July, so let us see. There is talk of a dwarf cultivar of papaya, with a thick stem and huge output of fruit. In the meantime, our saved seed papaya babies are growing up beneath a shade house in a composted area and we should have them in potting bags by early May. The trees from 2017 are pretty much finished and those remaining have aphid problems and should be cleared by the monsoon. Still, some are holding some fruit, which I stew twice weekly in a pressure cooker for our puppies, who like it very much! Green stewed bananas on the other hand – not so much! 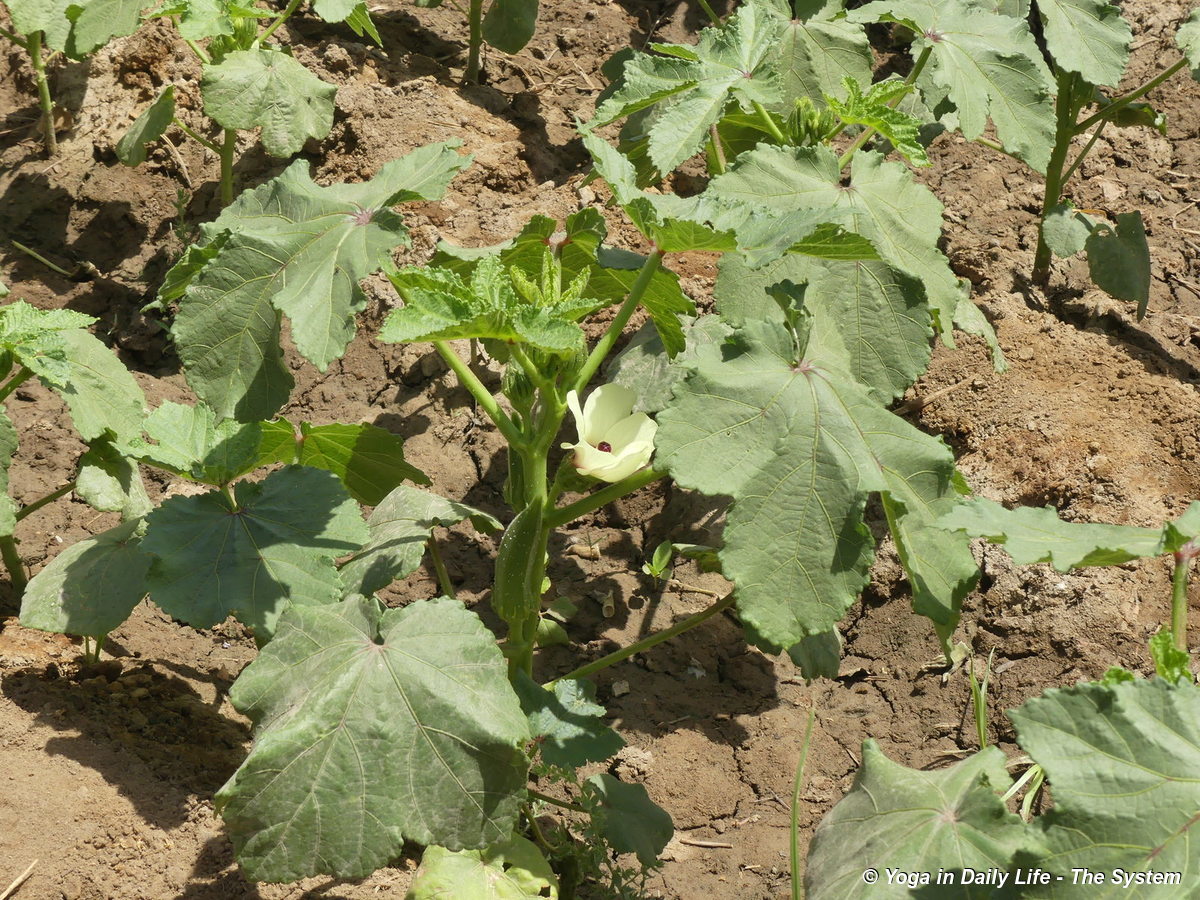 This month kair (Indian caper) fruit was collected and cooked and dried and the first sangria (bean pods of the Khejri tree) was collected on the 21st. Our gunda trees in the workshop area had a huge growth spurt following their lopping in February and the wind storm blew down some well-developed fruit, so that will probably be ready for harvest in early May.

On the 25th, we planted some more saved marigold seeds from very large flowers in a freshly-ploughed area in the middle of the Shiv Bagh, which was previously planted with eggplant and chilli seedlings and some winter flowers. These will hopefully develop well and bloom in time for Guru Purnima on July 16th. Finely powdered gobar has been used to fertilize this area, along with amaranth and sorghum. 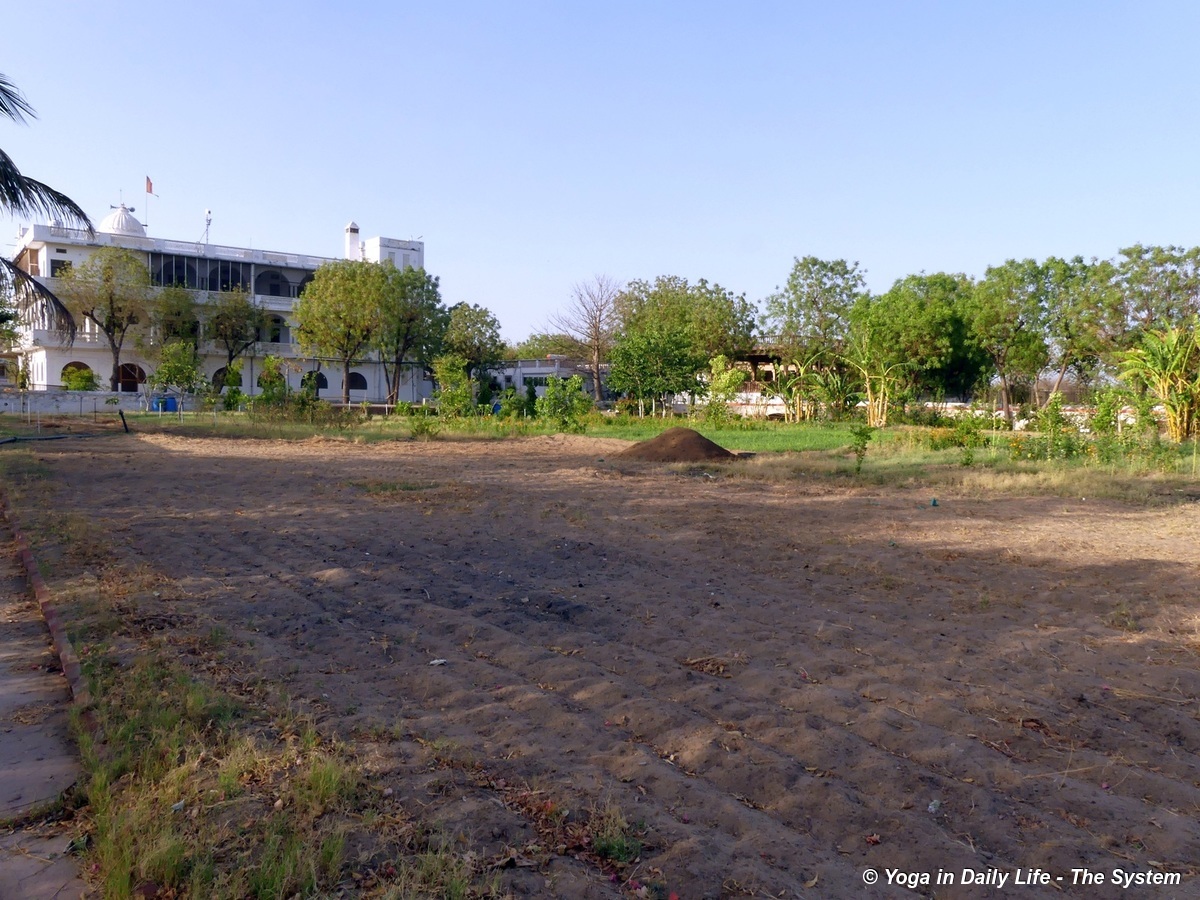 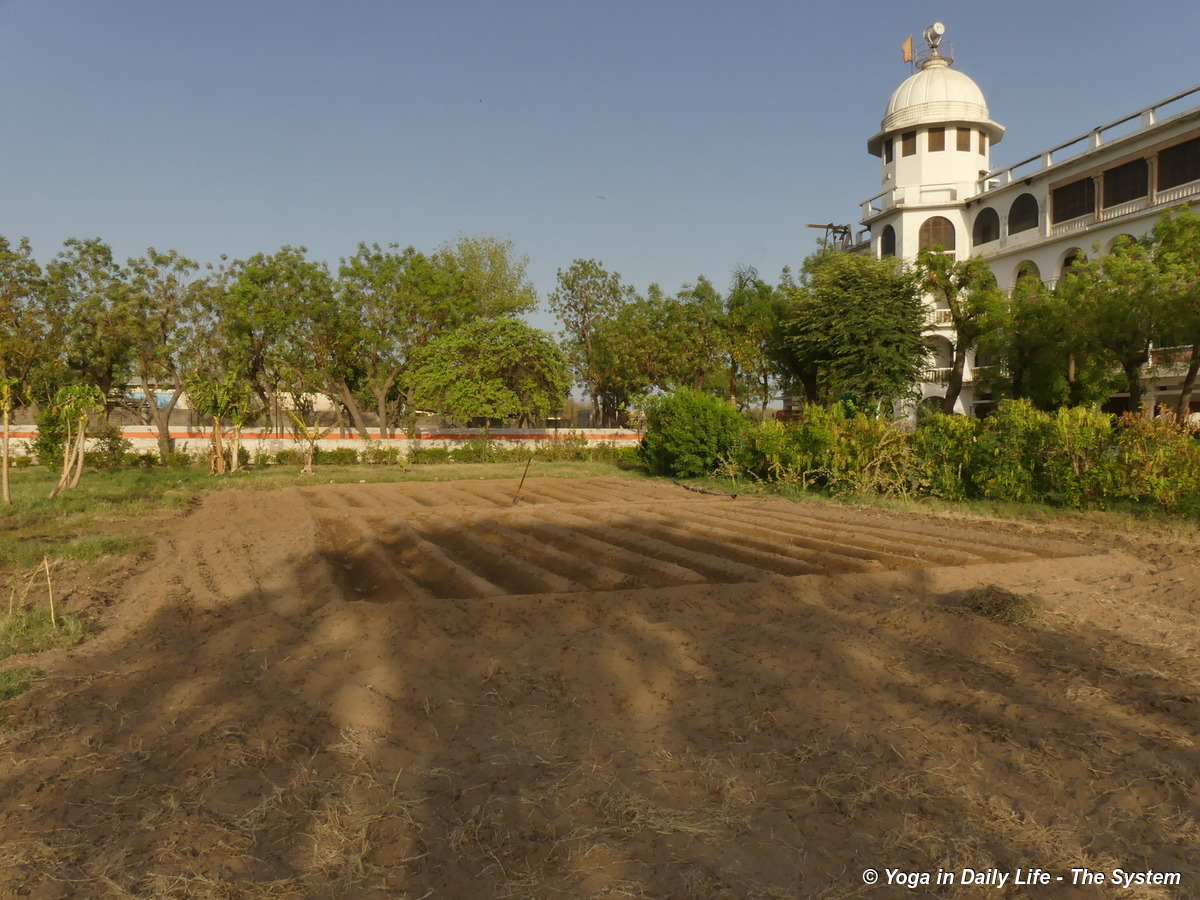 Our very small tomato plantation finished up on the 25th and on the 26th Lakshmi and Leela were so happy when the coconut rope that had been wound around papaya trees to protect the area was opened and they feasted on the sweet smelling dried plants and a few sundried fruits. Deeperam Maali is planning a bigger plantation soon, along with chillies and eggplant. 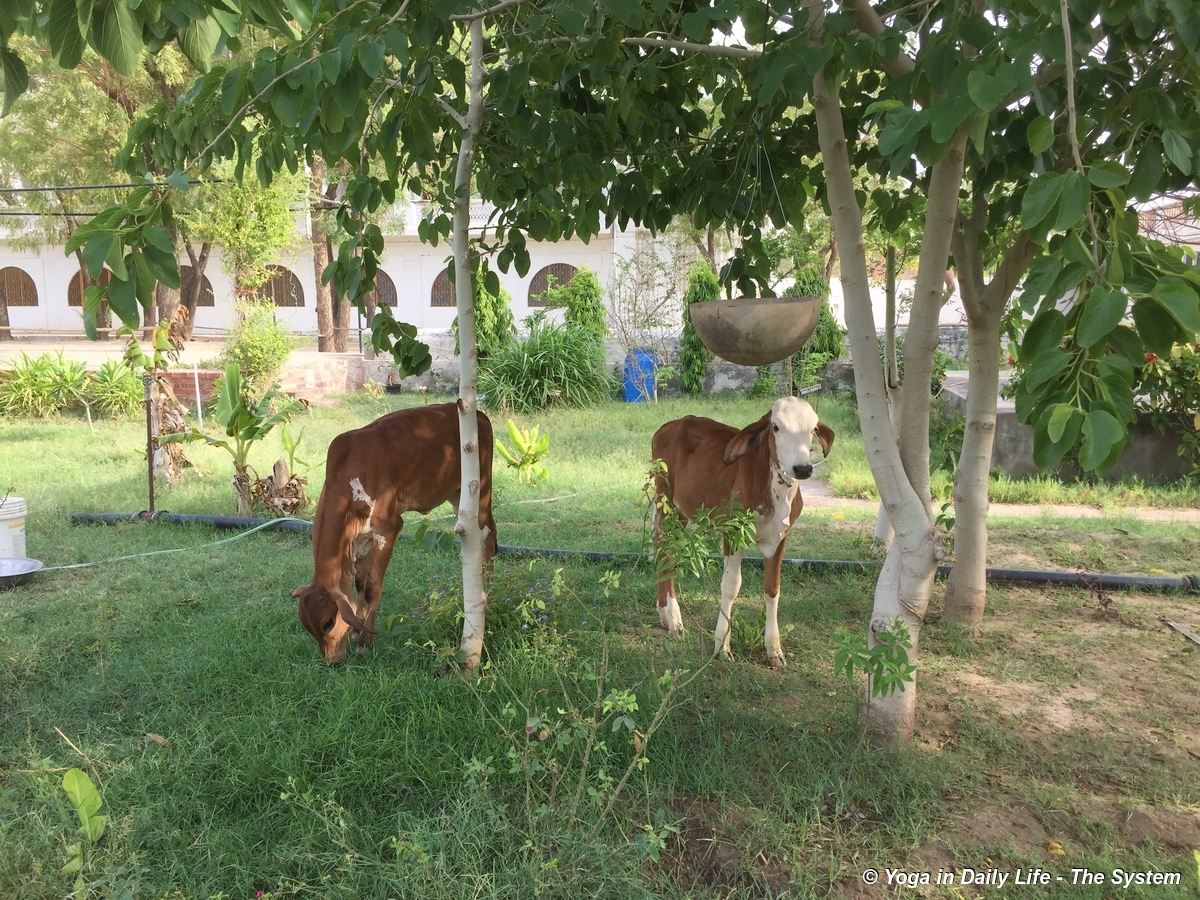 Our month-long seed cleaning operation finished up on the 25th as well – corn for planting this monsoon and many seeds for packing and selling, some winter flowers and autumn lettuce seeds, yellow mustard and flaxseed, and so on and so forth. This can now be stored pre-packing in the previous shop area, which is cool and dry for most of the year.

With Gurudev due here in early May, attention turned towards cleaning – especially dusting, during the final week of April and this is a tricky business once the afternoon loo starts to work its charm, during the scorching afternoons. The organic store got a complete dust removal makeover during this last torturously hot week, as the loo howled incessantly from 2pm onwards. It is a good time for packing veggie capsules! Slow and cool work.

Sabji production from the Big Garden began with tarkakdi and on the 28th, 93kg was harvested and by the end of the month the figure was already nearly 300kg! Bhindi and toru have also started and I was thinking that there would easily be a ton of cucumbers, but now, judging by the size of the strip, I am thinking that it could be more like 3 tons! No problems – it is refreshing and cooling and makes a tasty rehydrating vegetable dish too. 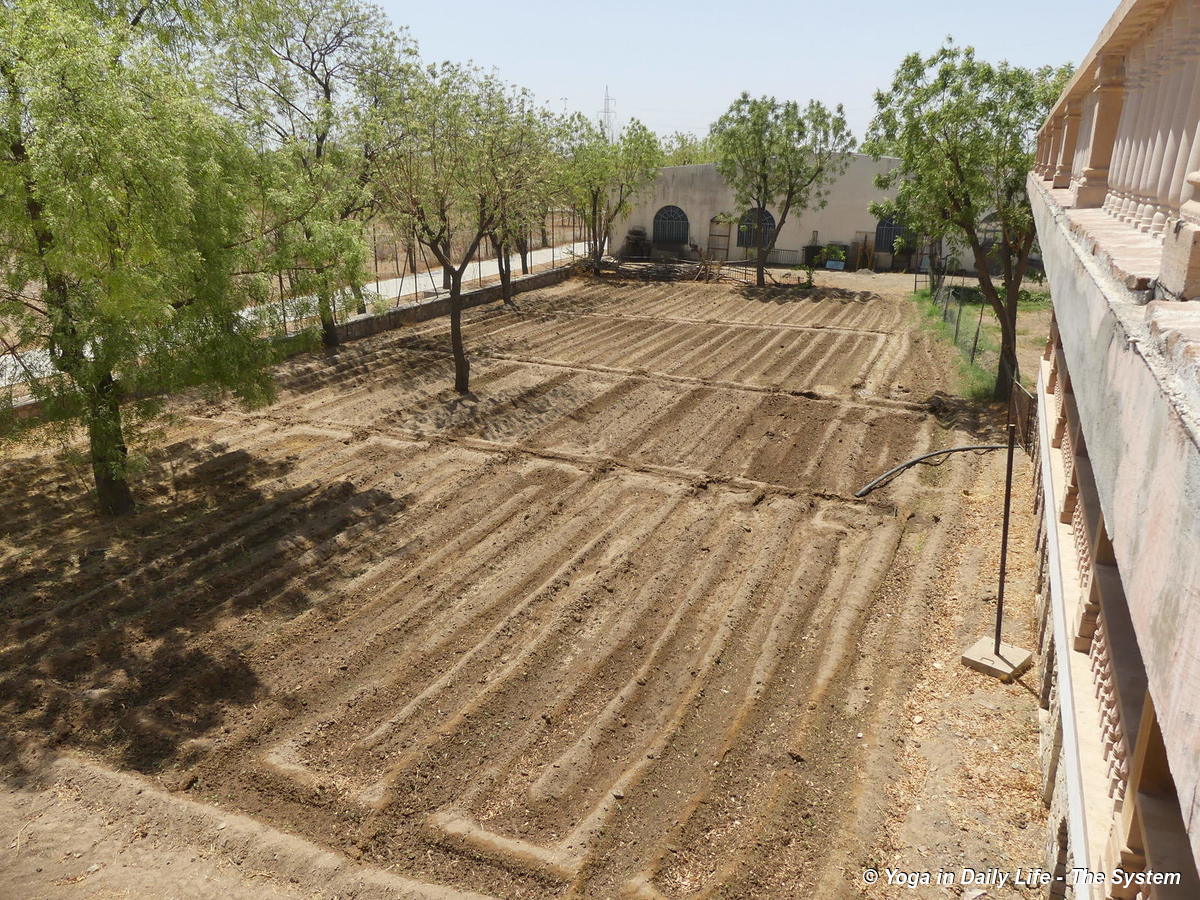 With the coming of May Day (International Workers' Day or Labour Day) I give thanks to the hundreds of local men and women of this rural area who have done thousands of hours of hot and heavy and dusty and sometimes tedious work, during the past nearly 3 decades, and without whom Jadan Ashram would not be the way it is now. And also to the brave and strong, the disciplined and patient and tenacious karma yogis with whom I live and many of whom inspire me on a daily basis to try harder and to cultivate more patience and humour!

For locals and for foreign residents alike, each and every day during the 8 -month long hot period is a challenge and a struggle for survival. The strength of the local people is seen in their smiles and team work and even temperedness, and a continual good will and willingness to help and cooperate. As workers unite throughout our globe to celebrate battles for fair hours and fair pay won by valiant protestors of yore, let us unite in this dreadful heat and cheer each other on until the sky bestows mercy upon us with sweet cool nectar.