This month we experienced some of the coolest temperatures felt in this part of Rajasthan for some years, and so it was good to have plenty of red beets to keep our blood red and warm! We also had the first rain for 5 months – on Indian Republic Day! – which came gently in the early morning and then fell torrentially by midday. There were even some hail stones!

Mostly the temperature did not go above the high twenties this month and we warmed up by the fire during the mornings and late sunrise, before pulling up and cleaning spring onions and harvesting fresh lettuce leaves. Leaves of mangold, ajwain, and mint, as well as thai and sweet basil and New Zealand spinach, were also added to our salad mix. We starting harvesting carrots towards the end of the month and also ploughed up a section of our sweet potato field and enjoyed a warm and sweet shakarkand halva – sweet potato pureed with ghee, milk and sugar.

In our lemon orchards in the Big Garden, there was more repairing of the irrigation ditches between the trees and on the last day of the month – thanks to the rains on the 26th – we were able to break up the hard clay soil in the upper lemon orchard and make long channels between the trees, which means that during our long summer months that all the trees in that area can be flood irrigated. This includes tamarinds and amlas, as well as the gunda trees in that area and a large bael patra.

We continued to work on the center of the Shiv Bagh, making pathways and channels for marigold seedlings; this should be completed by mid-February. Most of the cotton plants were removed and the hollyhocks and sunflowers are now in full bloom. Our tomato plants are flowering and some papaya fruit is starting to ripen, so the early signs of spring were there by the end of the month.

During the last week of January, the yellow mustard behind the central office was harvested and stacked for drying on the Shiv Bagh tank which receives full sunlight all day. Yellow mustard is commonly used to make oil, however we only have a few kilos and so shall sell it as a spice or for poojas, as it is believed to have the power to protect an area from asuric shaktis (negative forces or energies).

Our garlic plantation was weeded this month and a lot of last year's spinach seeds germinated in the beds, so we are harvesting a late batch of palak (spinach) this year – which is great, since the beds in the Shiv Bagh started to go to seed by the third week of the month.

We have plenty of produce still to harvest in February and for the group coming with Vishwaguruji. Leaves start to fall in all corners of the ashram with the February winds, which blow both warm and cold until about the 25th. There is a lot of weeding as always to do in the Shiv ,so all are welcome to help out during the spring Mahashivratri group. 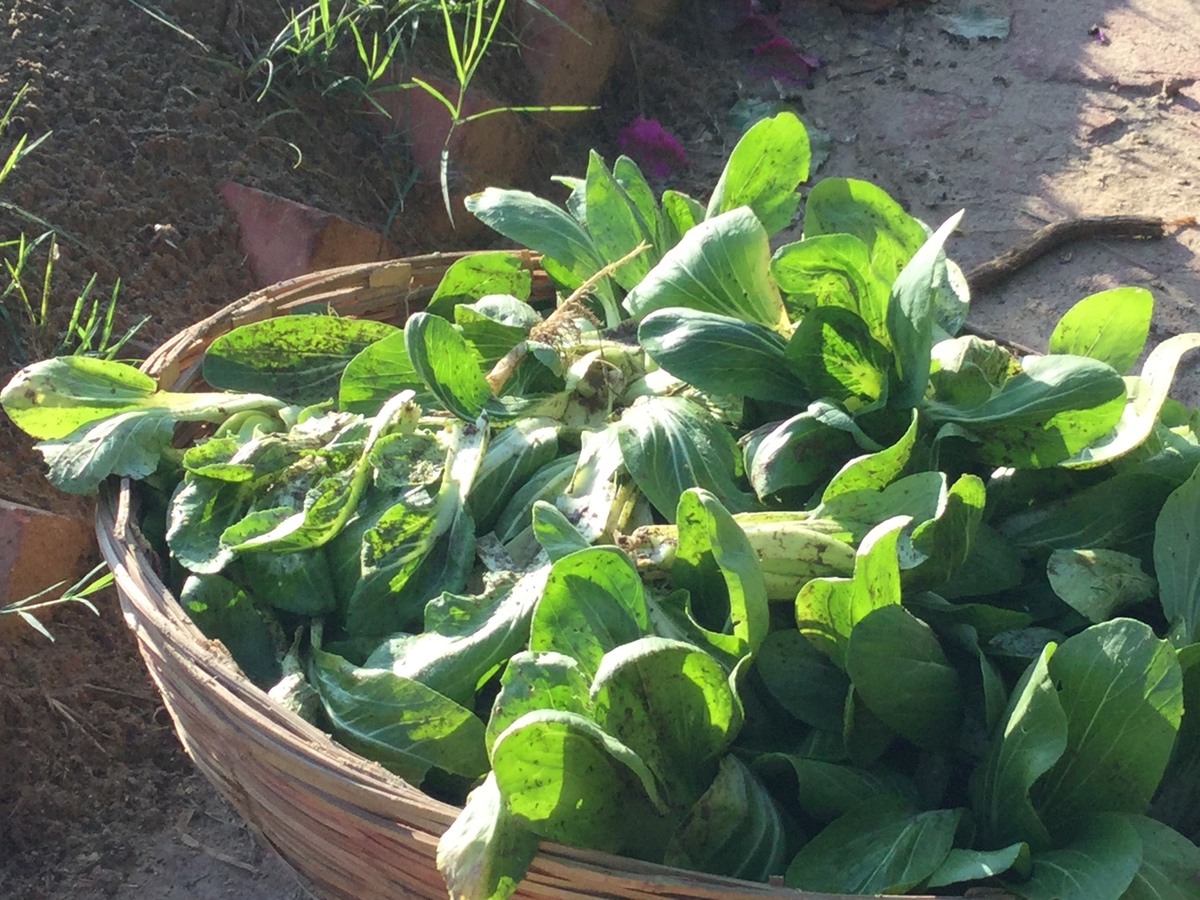 It has been a long long 2 months without Swamiji and we are very thirsty for His Darshan at the end of February, by which time spring and flowers will be in full bloom and the winter behind us for another year. Then we shall begin the annual irrigation dance that lasts until the monsoon rains and then again in the weeks before Deewali.

Welcome to visit for Mahashivratri night and the beautiful Jadan spring, and also Holi festival on March 12th. It is a golden season in this part of Rajasthan.