From the 12 May, Vishwaguruji was here with us and so, despite the temperature being over 40 degrees Celsius every day and some very humid conditions, it was a very special month. He was pleased with the progress of the gardens and there was enough sabji (cooking vegetables) for his kitchen and somehow the heat became less of a focal point during his visit.

We started some much needed ornamental pathways in the Shiv Bagh this month, and some new soil has been purchased which has no grass seed inside and will be placed on top of mulch materials in order to hold down or stifle the Bermuda grass and nutsedge below, by starving these nuisance weeds from sunlight.

We also started to block weeds growing on the pathways between our east to west sabji channels, using cardboard, banana leaves, coconut palm leaves, old sacks, carpets and rags. These mulch piles will compost down to good soil and by next February they will be ready to host watermelon seeds. 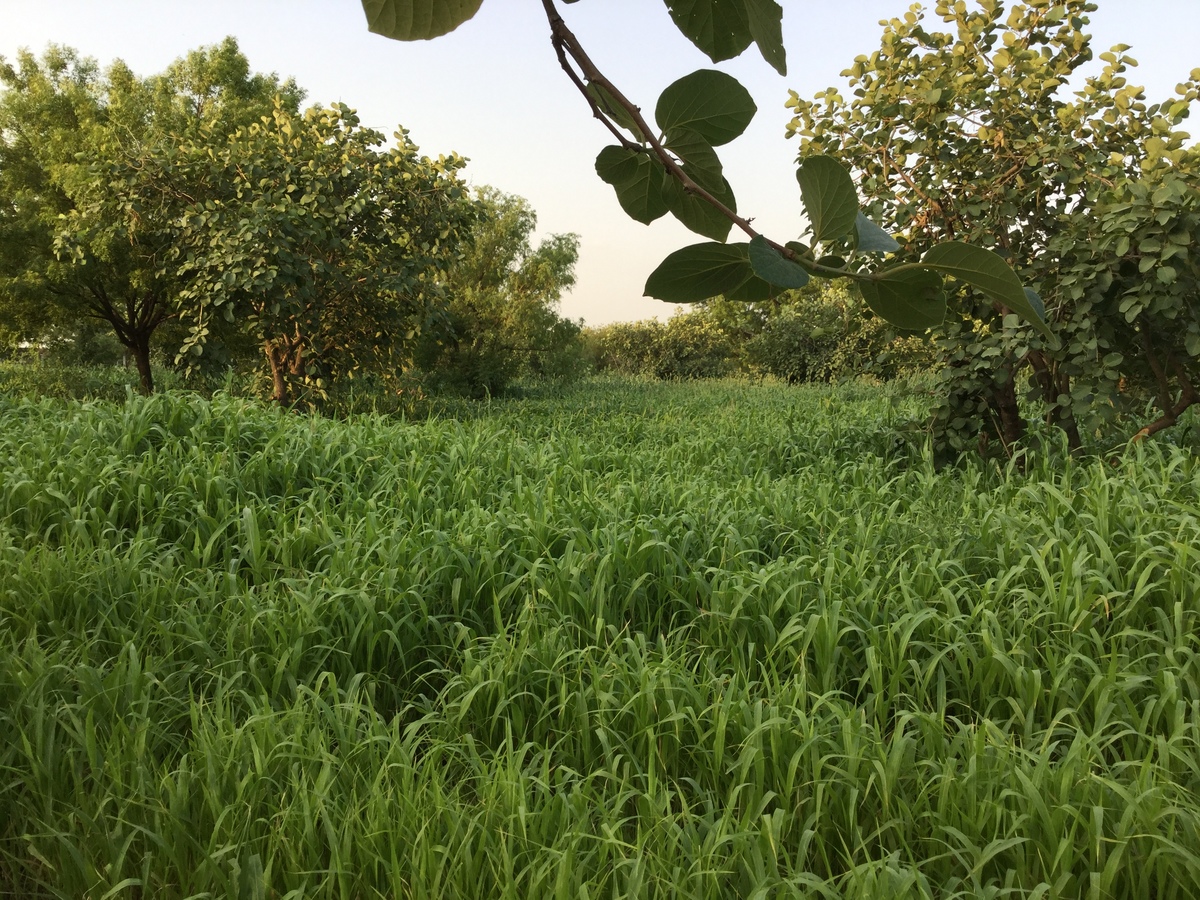 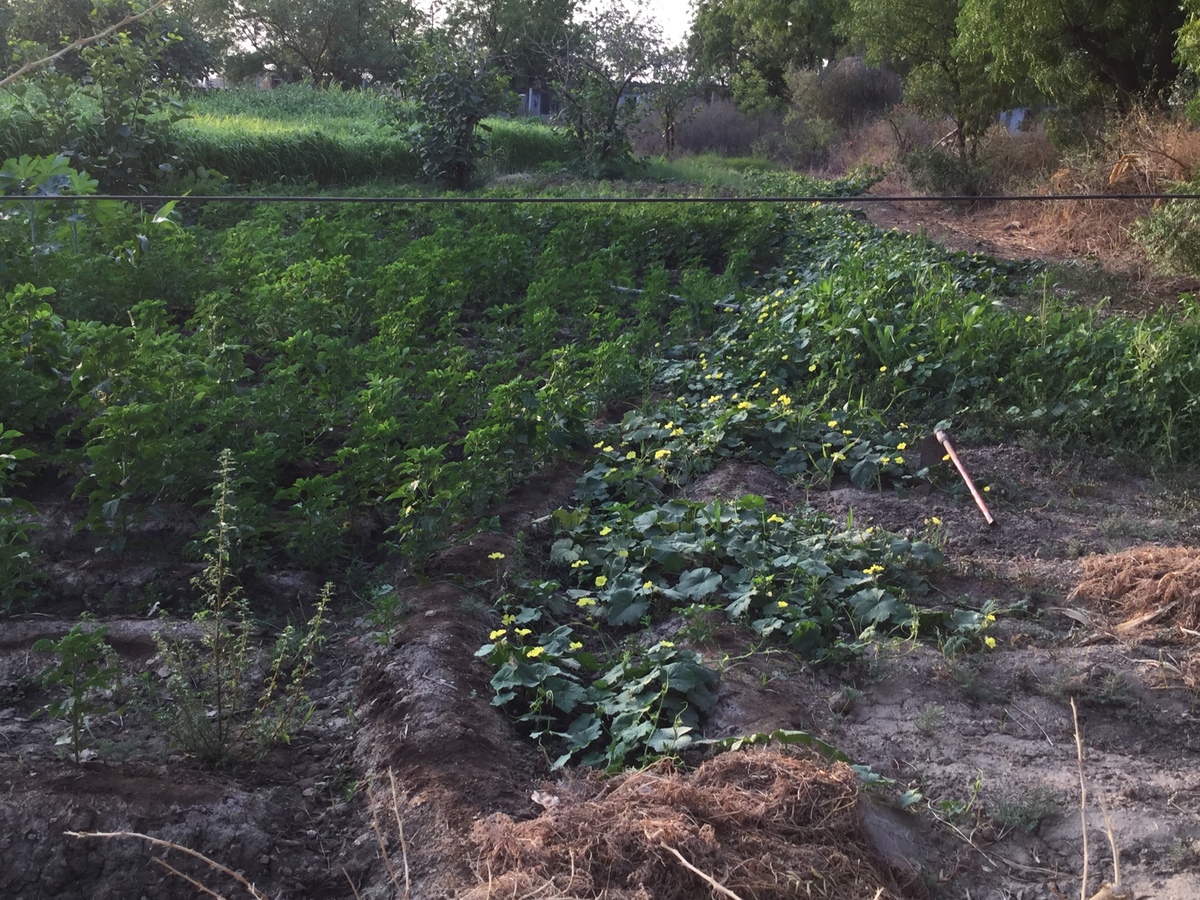 In the Big Garden the jowar grew slowly and harvest should start next month. Our vegetable patch there had its second weeding and some lauki was planted where the tindi seeds failed. We started to harvest after the third week of May. Toru gourds started to appear on the vines near the workshop garden that Swamiji has now given a name – Madhuvaani – which means honey words. That is a challenge in the gardens most days! 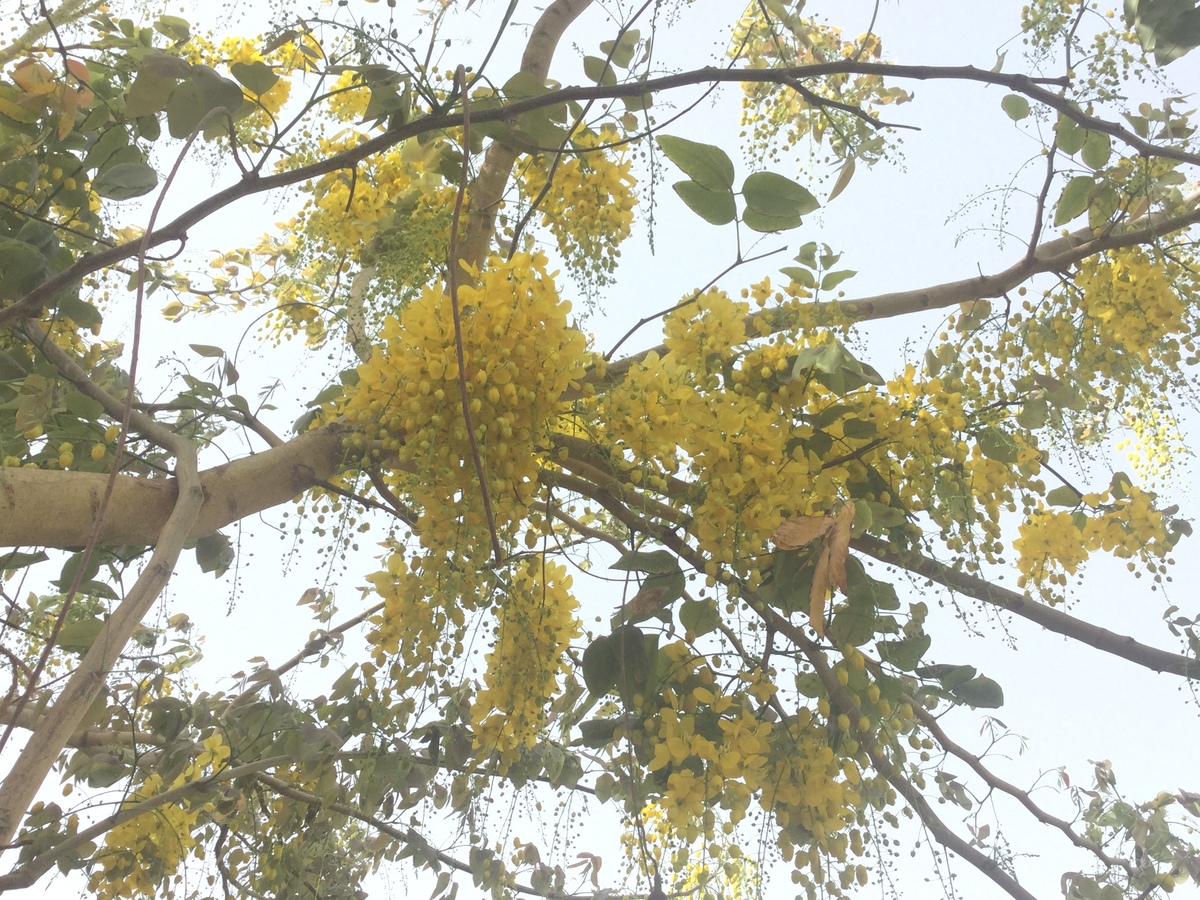 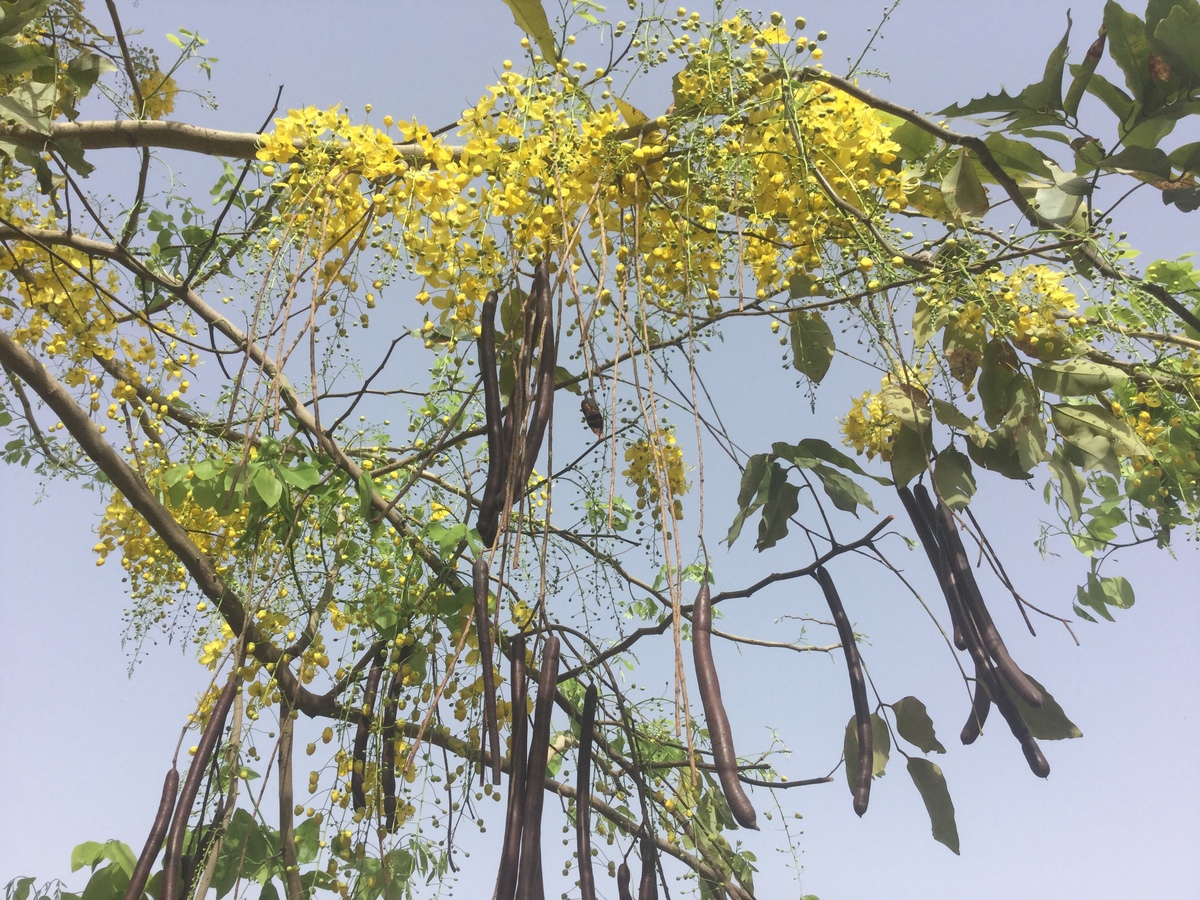 Amaltas in full bloom and Our own tree grown from our own seeds.

We tried some early planting of Hokkaido pumpkins, zucchini and other varieties of cucurbits in the Shiv Bagh east to west channels, because this month we dug more east to west channels in order to minimize the weedy pathways in between, and so we had extra space to try some experimental planting. This will continue for the rest of the year, as we have so many different seeds now from all over the world and we need to find the right season for each cultivar. To date most of these seedlings look happy enough. 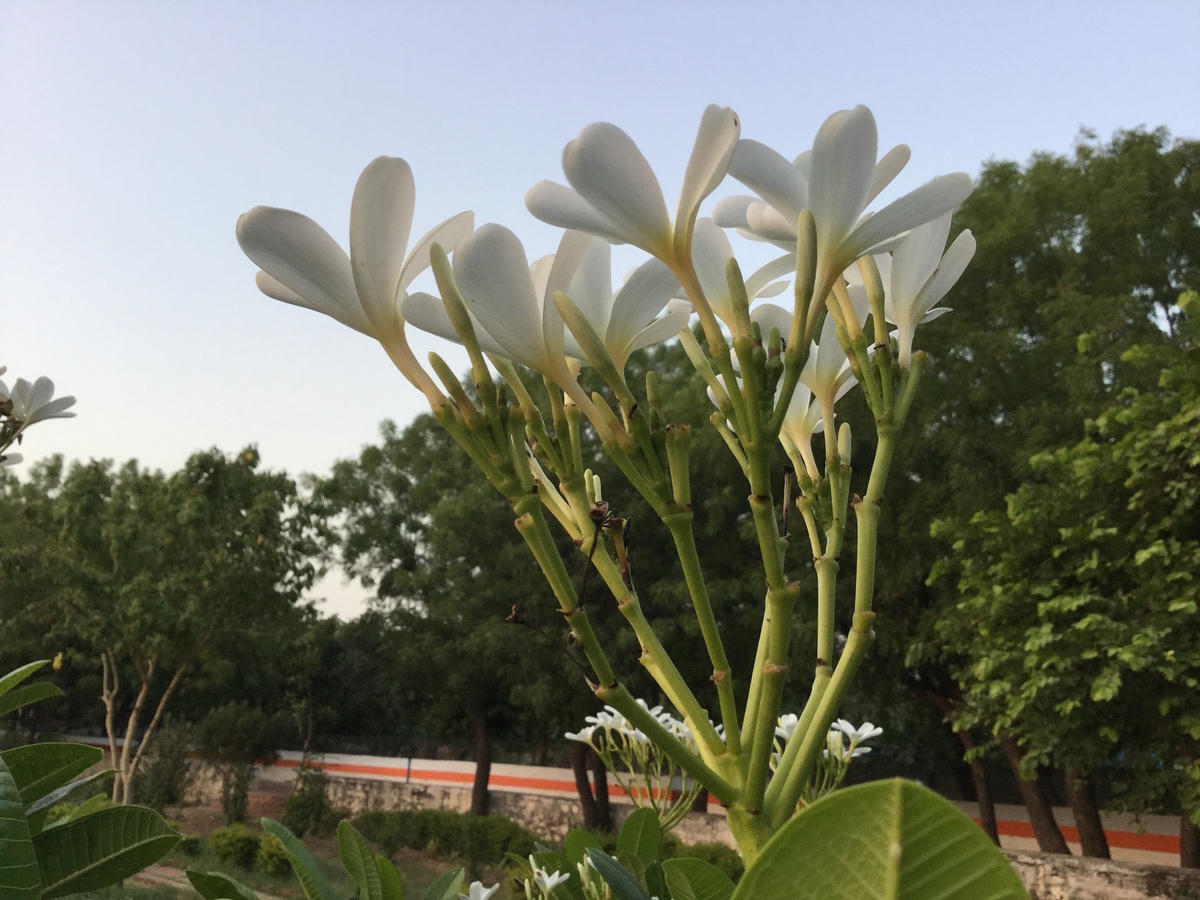 In our tree seedling area we tried some Nipal bharmasi (perennial) lemon tree seeds. These trees are a larger and more European appearance type of lemon that fruits throughout the year. The seeds have germinated, so we shall plant them somewhere when they are bigger and stronger.

Swamiji mentioned that this year a new garden will be inaugurated in front of Mataji’s Samadhi site. Here will be planted some bitter almond trees locally known as khari badams (otherwise known as the Pomgame oiltree or karanj in Hindi language) Millettia pongamia or the Indian beech tree, is a fast growing tree with a large canopy that spreads evenly and so is ideal for gardens in Rajasthan, where plenty of shady places to sit are needed. The oil from these seeds has been used for thousands of years as a lubricant as well as for biodiesel generators, along with jatropha and castor oil seeds. Recent research shows that the tree may be used successfully in cancer treatment.

And of course we continued for many hours this month to battle the weeds, and to irrigate by sprinklers as well as one inch pipes, two and a half inch pipes and watering cans, and everything is surviving. It is time now to start preparing areas for monsoon vegetables – firstly some seedling beds for tomatoes, chillies and a few eggplants, and then for gourds and cucumbers.

Lauki did really well this month in the Shiv Bagh and we collected 80kg. Gundas were harvested from Madhuvaani and the Big Garden in the jowar area, and all together 200kg were harvested then boiled and pitted and sundried. A lot of gummy gooey work, as the stone in the middle is not unlike glue paste, or even the worst variety of catarrh! 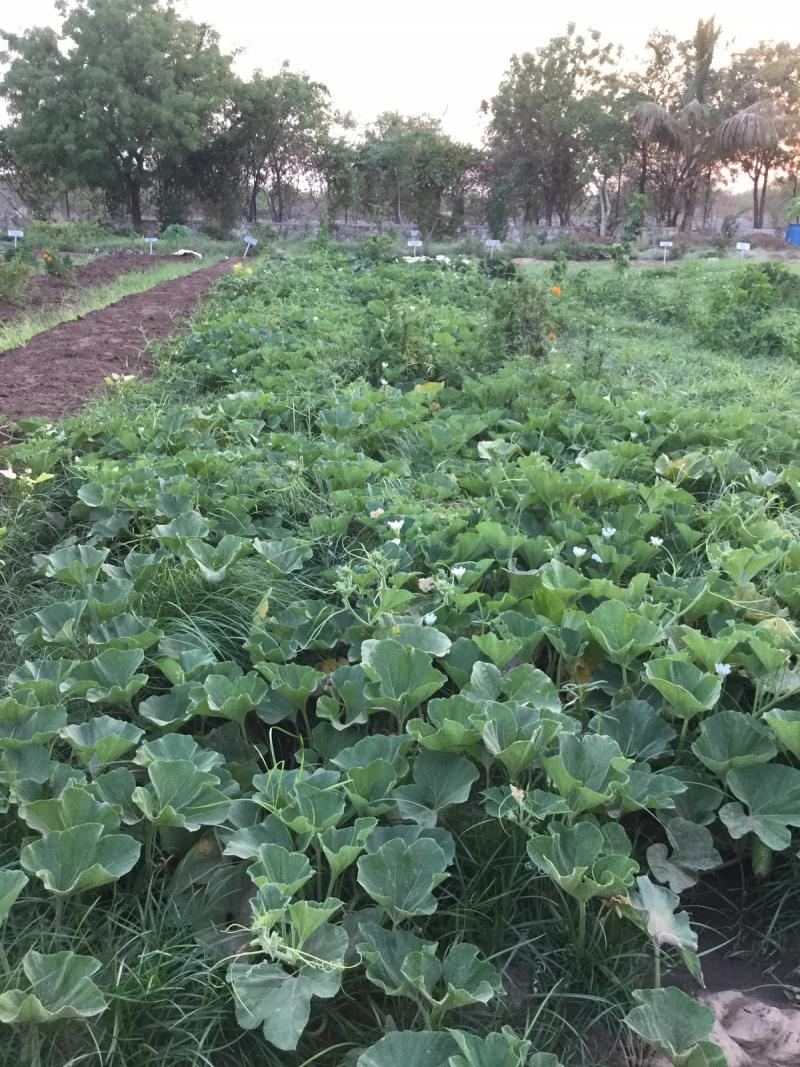 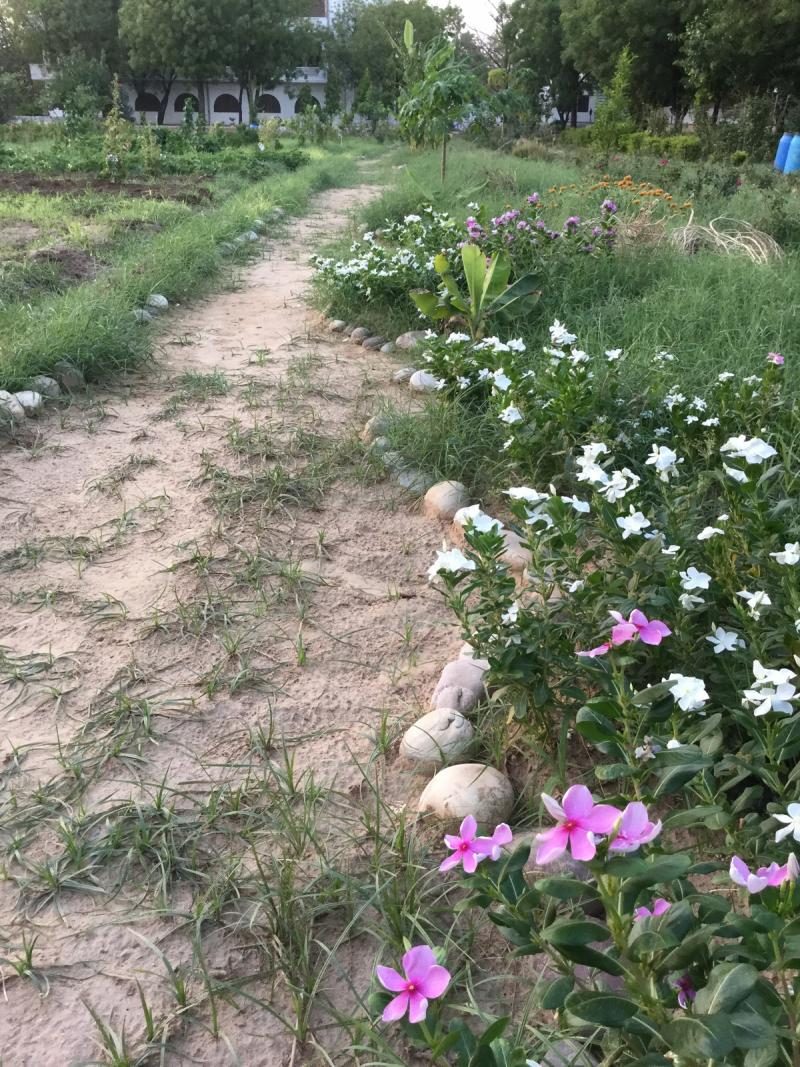 Other works behind us are the harvest of curry leaves and moringa too, plus the making of this year’s first batch of gulkand, and the cutting and drying of the rest of the neem giloy stems.

The north wall in our Organic Store has been knocked out partially and nicely cemented, so no more flaking paint. Thank you to our tiny group of bhaktas for supporting the store and for their interest in local produce. We shall have many nice new items for Guru Purnima time.

The ex-winter beds on the west side of the Shiv Bagh were ploughed this month and now the area looks like a construction site, with large piles of sandy soil and gobar, all for the sake of creating some inner walkways and to tame the wild weeds that I feel that we desperately need to get under control before the monsoon starts. 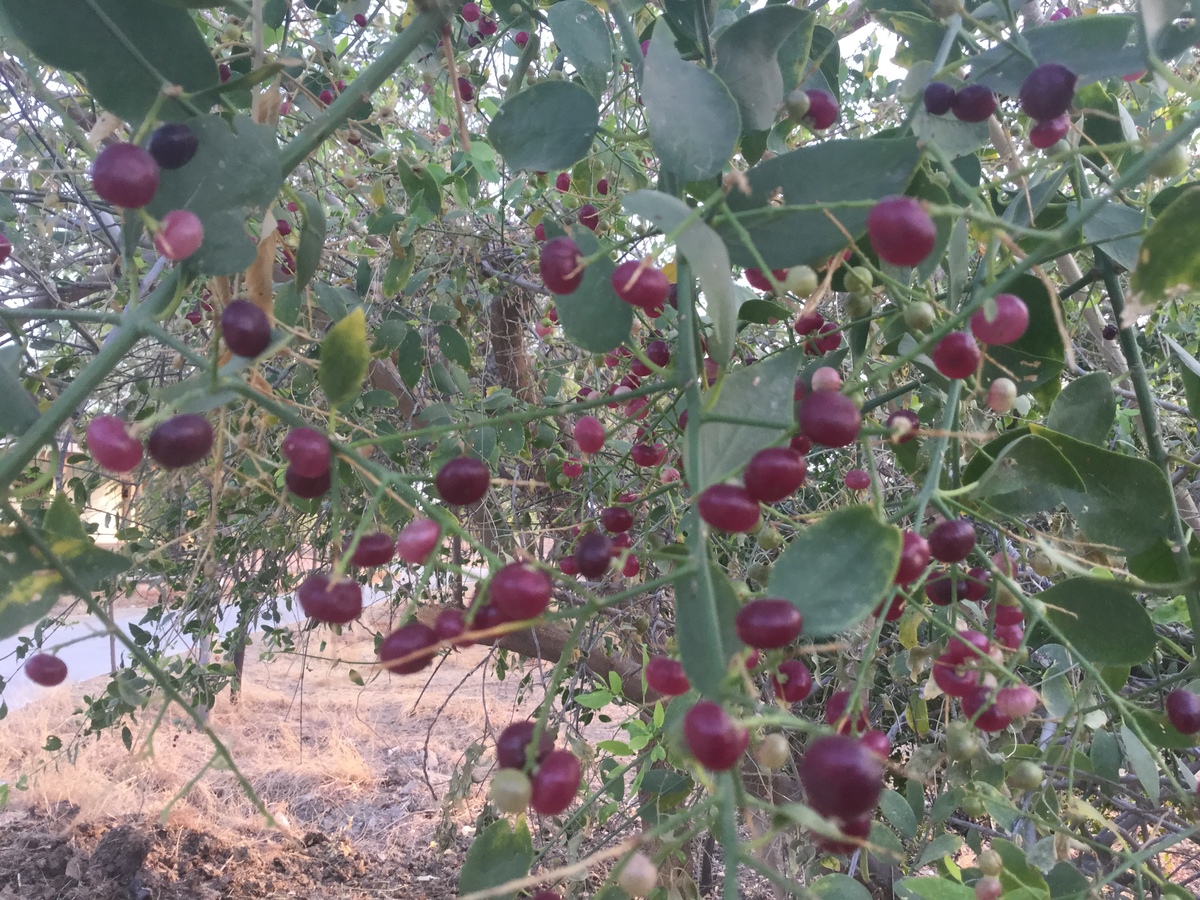 As for the 'fire of May' – we followed the rules of the summer according to ritucharya (see next article) and after Babaji's arrival our attention was diverted from the weather! We spent some blissful moments in the cool of the Bhakti Sagar.

June, in many ways, is the make or break month in Jadan Ashram, because the temperature is high but no longer dry, and the humidity is very uncomfortable after the second week. However the forecast indicates an early monsoon, or at the very least a good pre-monsoon and we have had quite a few spectacular displays of lightning during the late evenings, so I hope that it is not too far away.