On 5 April this year is Chaitra amavasya. It is believed that by fasting on this day our ancestors will achieve liberation. It is followed by the beginning of Ram Navratri....

Ram Navratri culminates on the 14th of April with Ram Navami, which is the birthday or jayanti of Lord Rama. Through the worship of the various manifestations of Shakti during this nine day period, the very important junction of climatic and solar influence (in this case – the beginning of the Indian summer) and the consequent changes in the bodies and minds of people due to the climatic change, is eased and adjustment is helped.

After the euphoria of spring and the divine and colourful blossoms of our flowers and Holi colours, the mercury swung up drastically to 38 degrees celsius on the 24th of March and the last 5 days of the month were above 40 degrees – the highest being 42.9. Since then, the temperature has climbed to almost 45 and there are also signs that the hot winds of the loo have started early.

Fortunately the sabji was sowed on the 9th and there were a few nights below 20 degrees up until the 28th, which is a comfortable temperature for summer germination. Now, the huge area in our gunda field has become a nursery for baby vegetables, though in the northern area of the plantation there is quite a heavy presence of nut sedge.

The lemon orchards were prepared for summer irrigation this month and joining channels have been constructed between all of the trees so that they can be flood-irrigated. All of our mango and citrus trees in the Shiv Bagh and workshop areas were dug and fertilized and some white mulberry trees finally came into fruit after a 5-year wait! The fruits are long and fat and extremely sweet and white mulberry leaf tea is said to have benefits for diabetics and for purifying the blood. 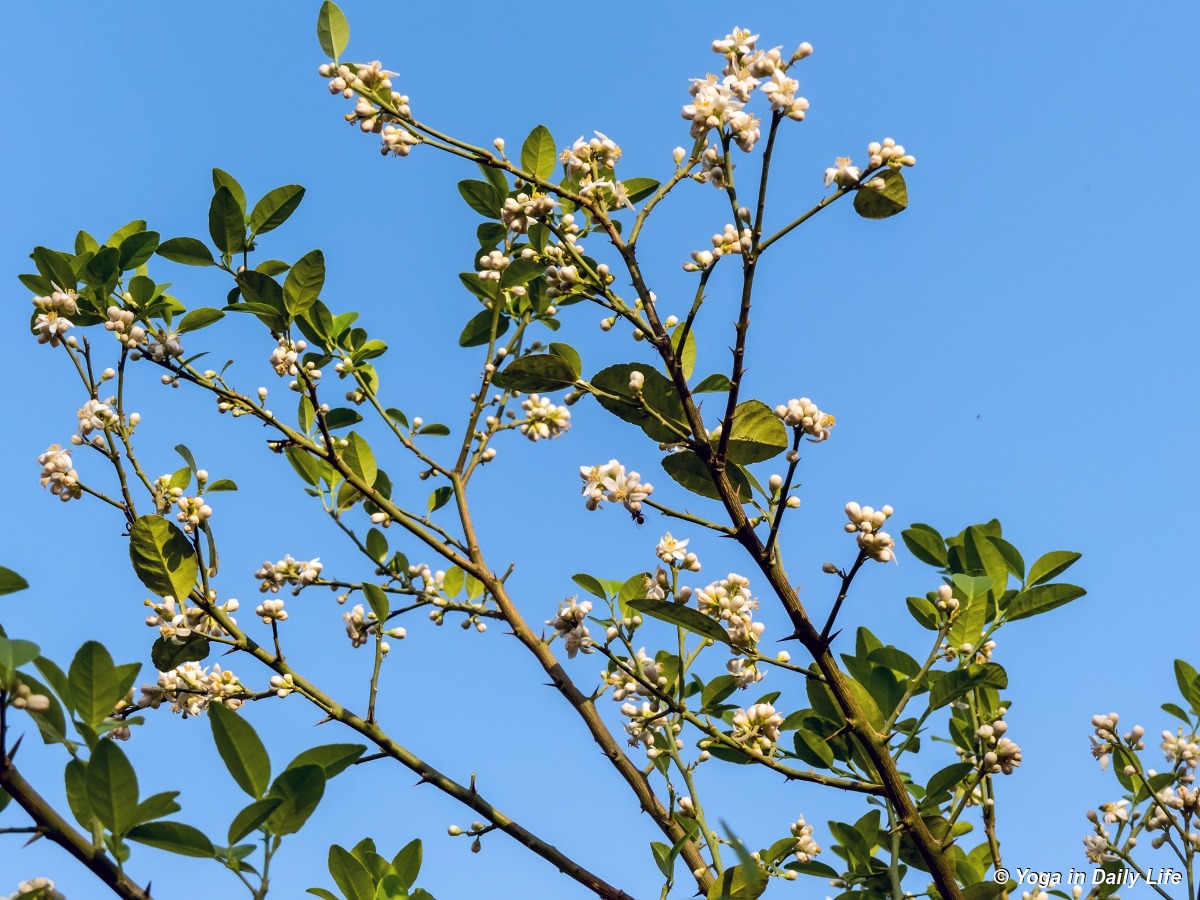 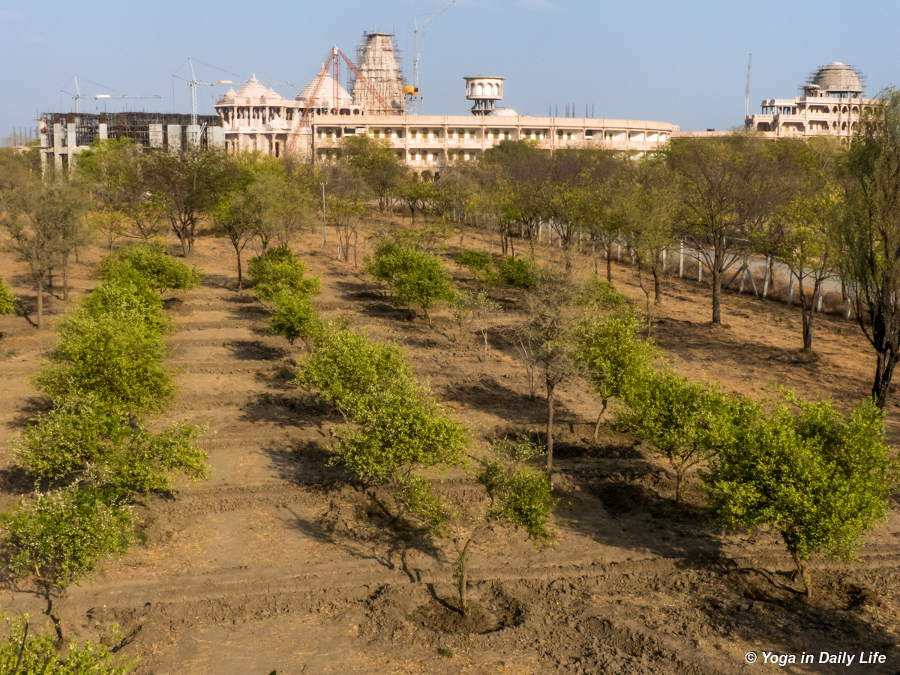 This month the linseeds were harvested and cleaned – we have about 12kg – as were the rest of the winter vegetables – mostly beets and carrots and spring onions, and the winter field was closed by Holi holiday, which began on the 20th. We harvested about 50kg of papaya this month and there should be another 30kg to harvest in April, but many of the trees will not survive another season and some were removed altogether.

The talab (rainwater reservoir) level is now less than 3 metres. 15 of the 43 sprinklers in the Shiv Bagh are now closed and some areas have been ploughed and will rest until monsoon planting, which will hopefully mean that some of the Bermuda grass roots will die off. We had some good weeding programmes here this month and sent four trolley loads of good grasses off to the new Gaushala (cow refuge). Daily raking of tree litter – especially dried neem leaves and bougainvillea leaves – is now an essential task, in order that irrigation channels are not blocked.

In the workshop garden, the marigolds are blooming beautifully and in some cases very largely, though some plants are showing signs of heat stress. There is still parsley and basil, and even a few small celery leaves have come up. Two areas here have been fertilized for papaya seedlings and well ploughed, and nuisance grass roots manually removed. Now the challenge is on to find nurseries that stock this monsoon seedling this time of year. 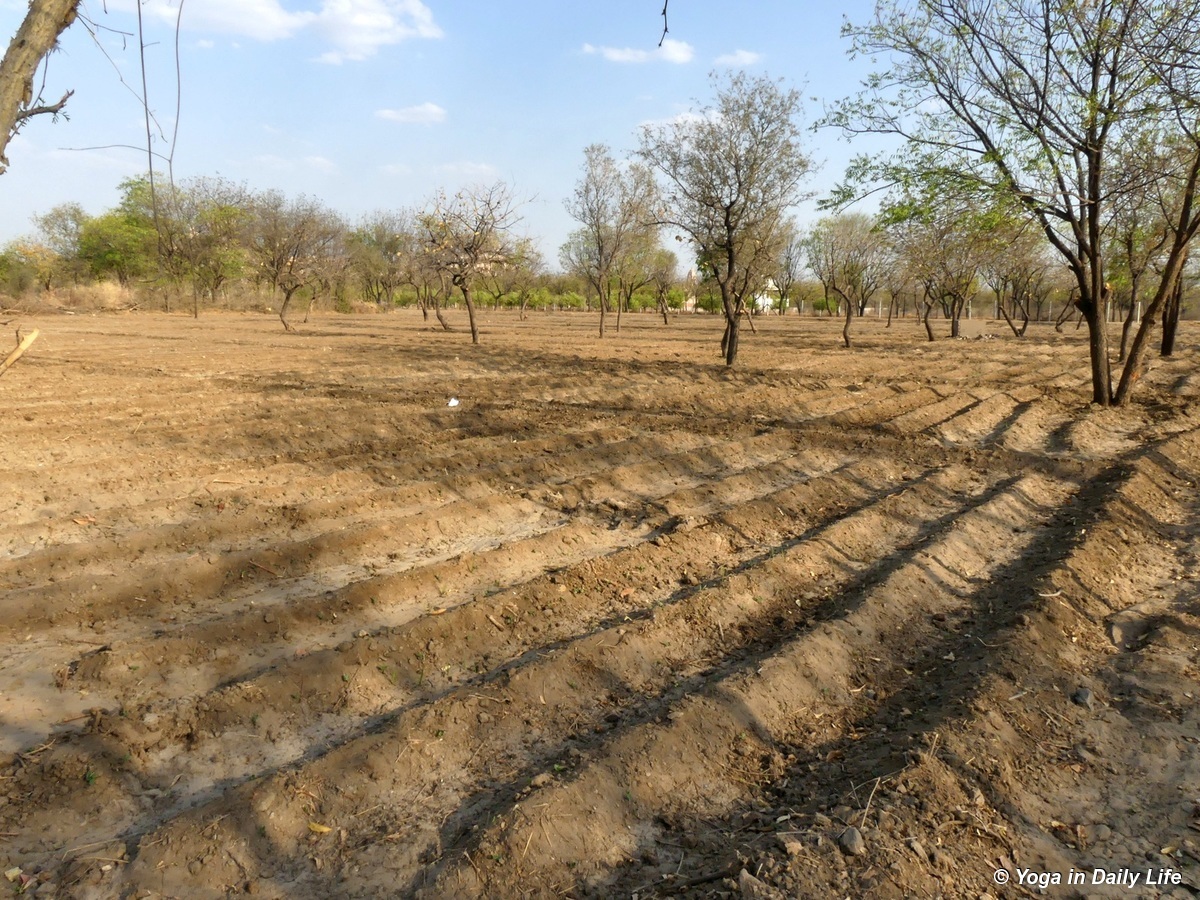 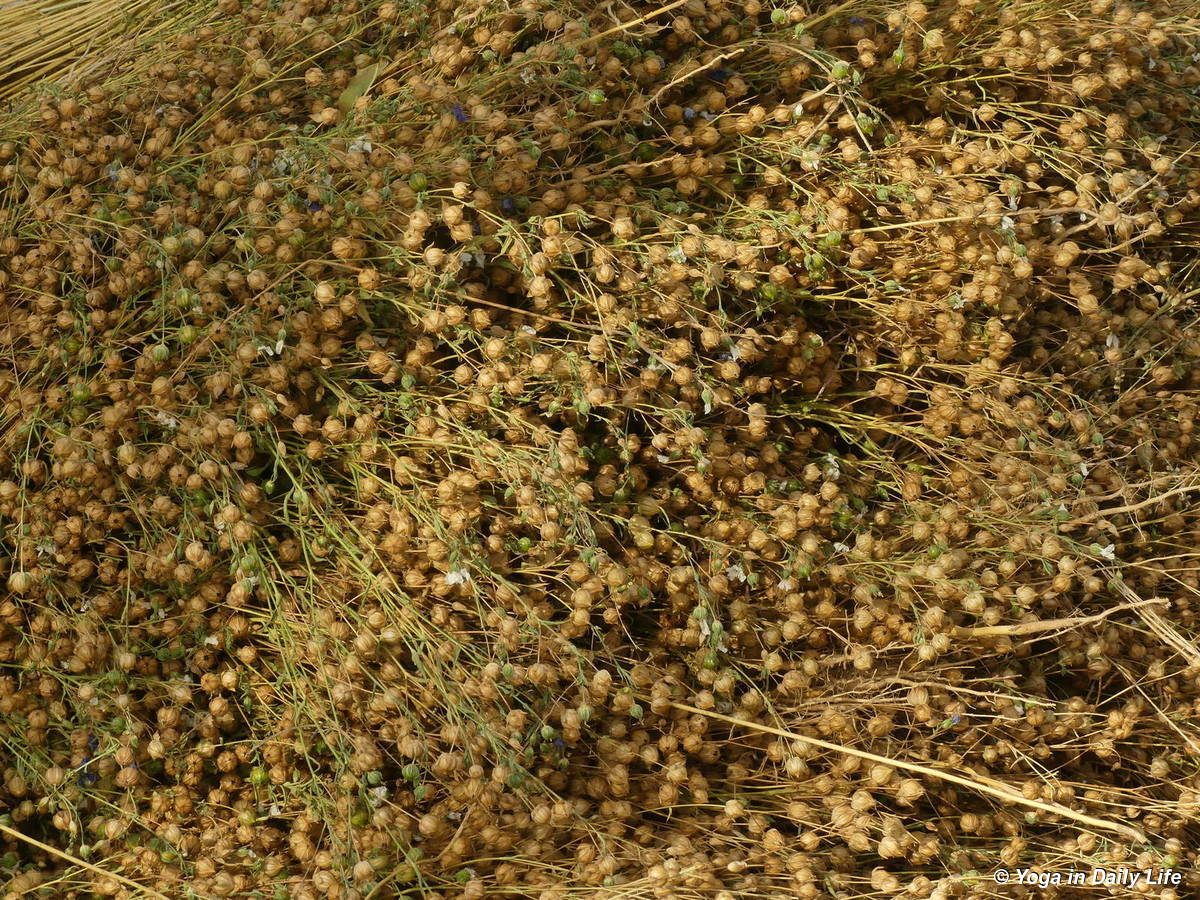 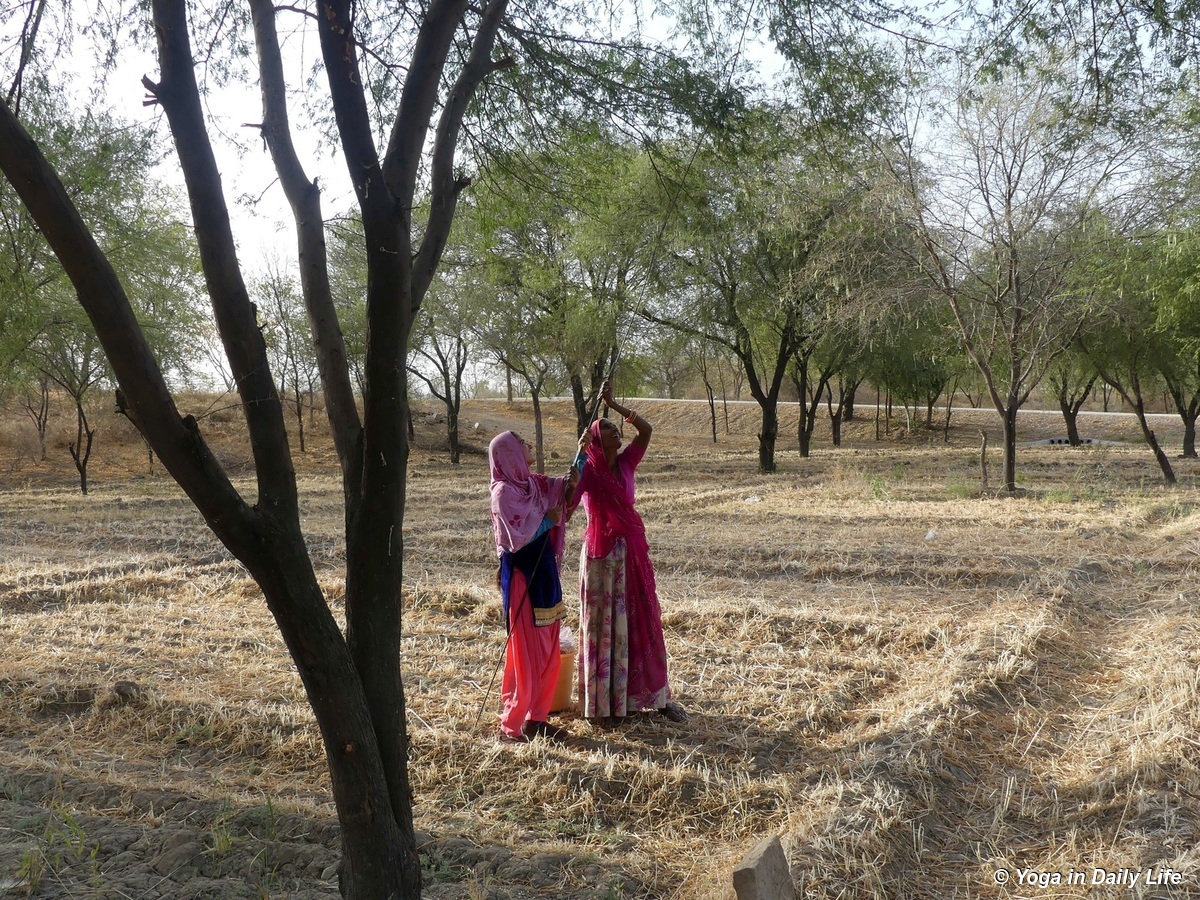 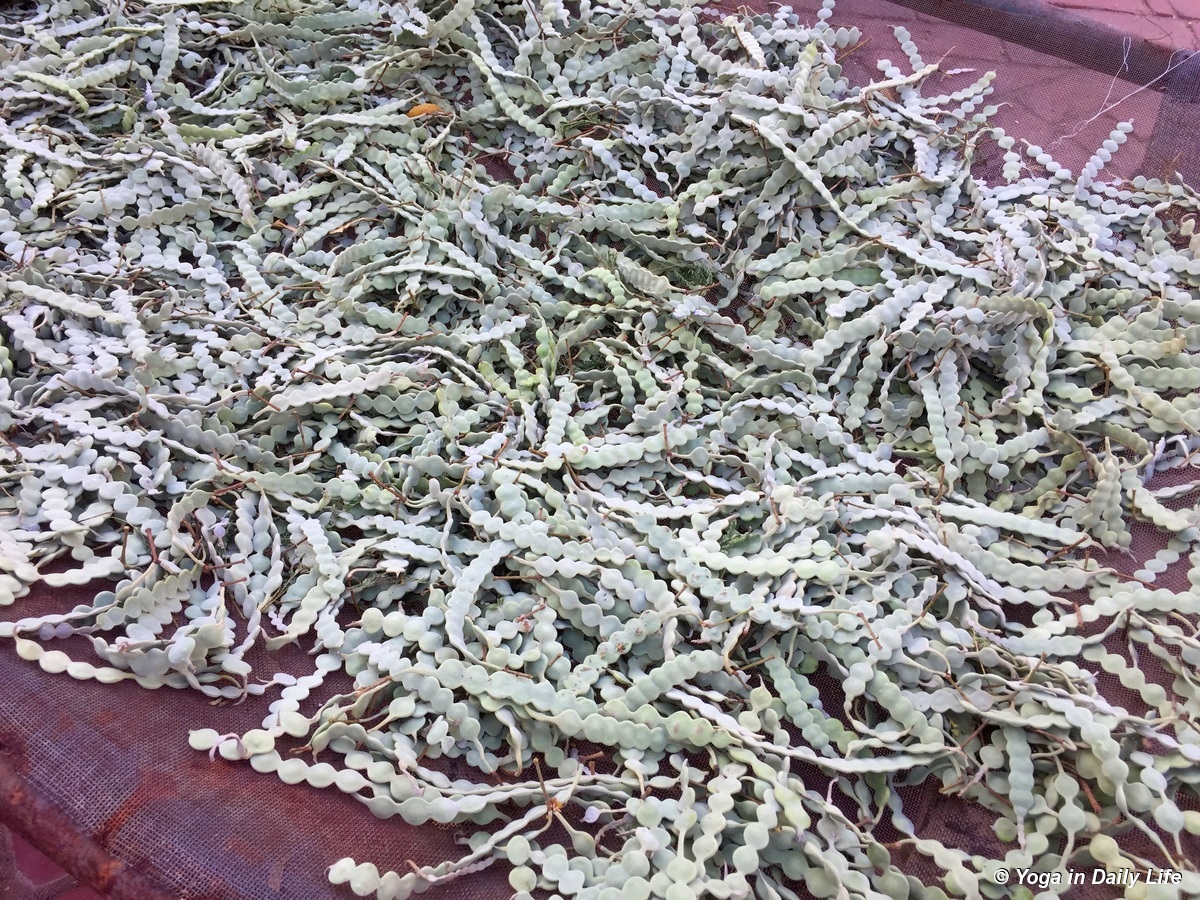 Cherry tomatoes self-seeded in a small area of the Shiv Bagh and a tiny area that was planted in November has produced a few kilos of larger ones. The much needed salad vegetable of this season is the cooling cucumber, so hopefully the small plants in the Big Garden will start producing something by late April. Grapes are in season in the market and these are very refreshing when chilled but they are notoriously heavily sprayed so it is good to wash them carefully and to soak them in a dilute solution of mittu soda (sodium bicarbonate) before consuming them.

And of course finally, our wheat was harvested after Holi and threshed by machine, and it is estimated that the yield is around 7 tons this year. 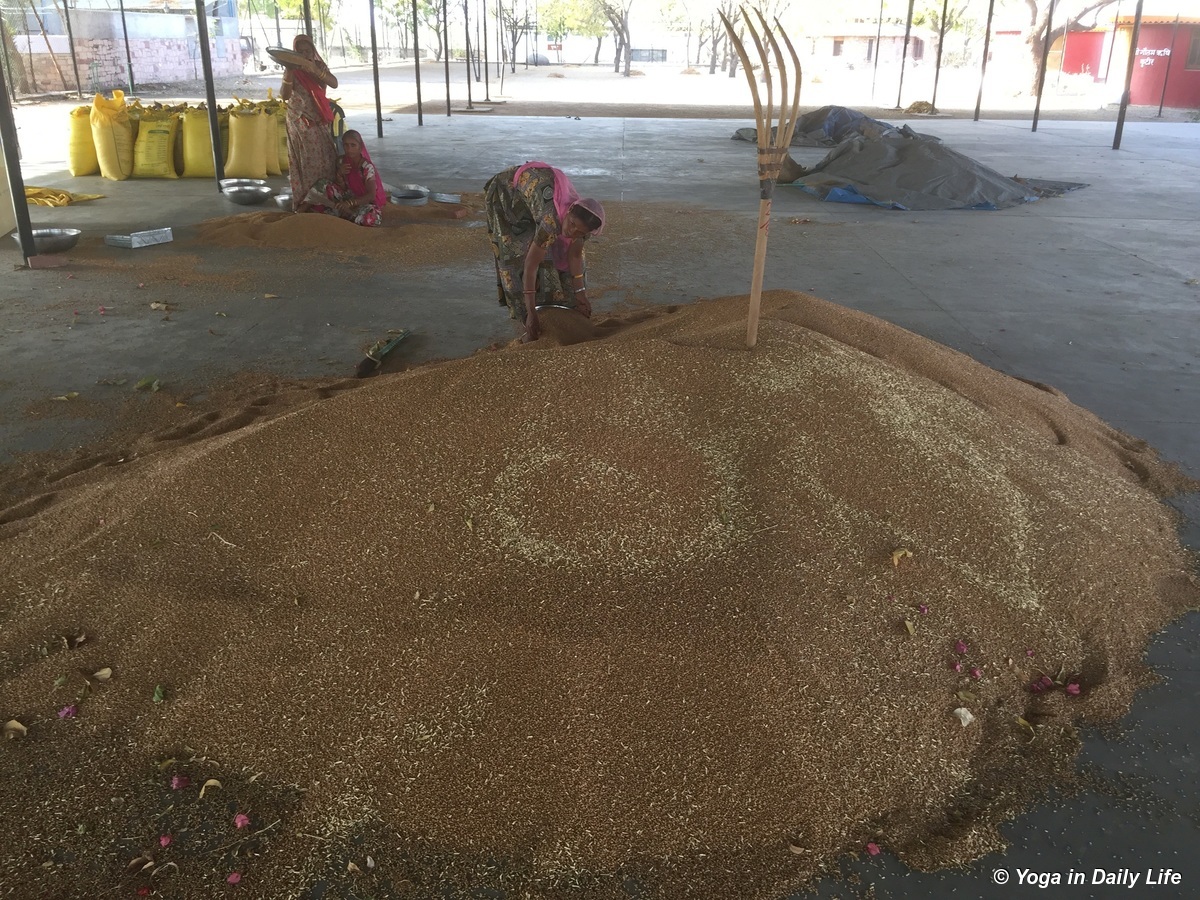 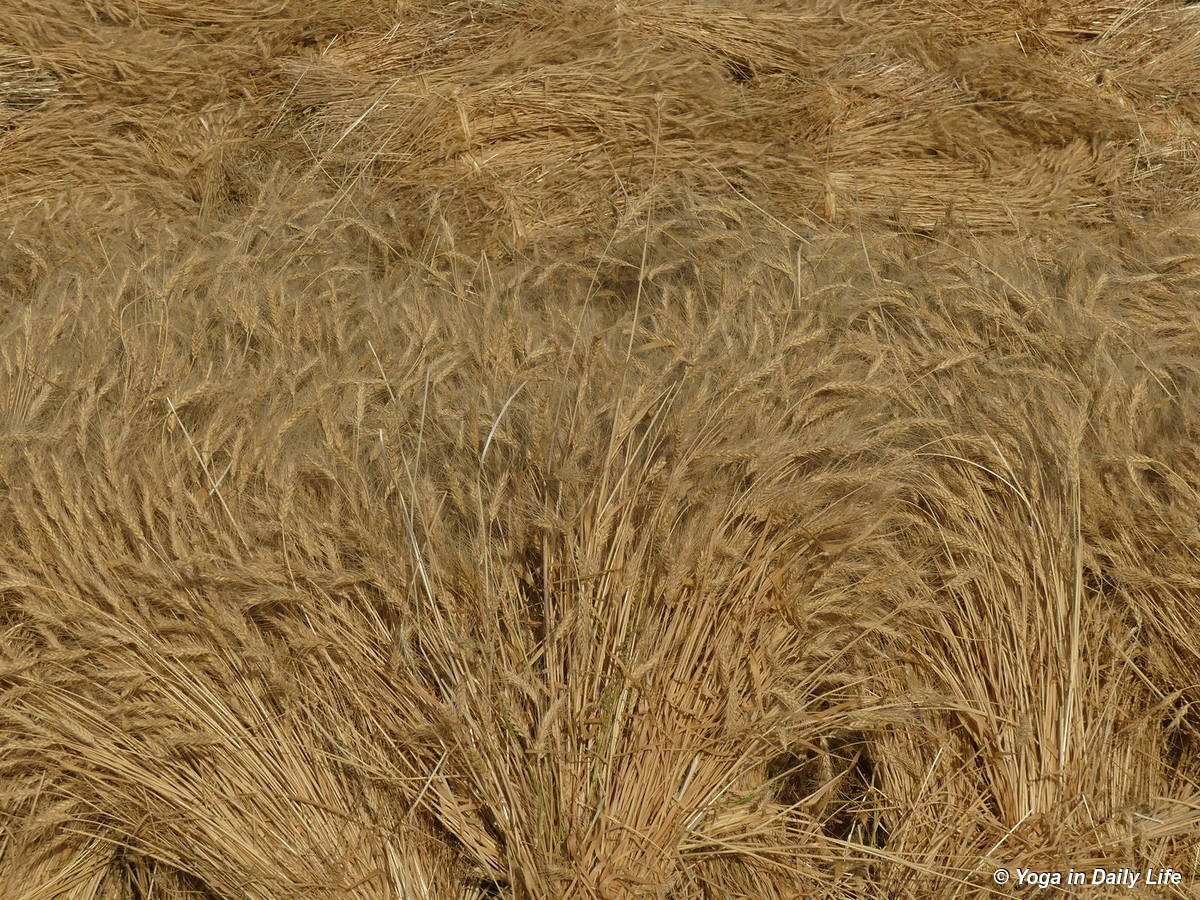 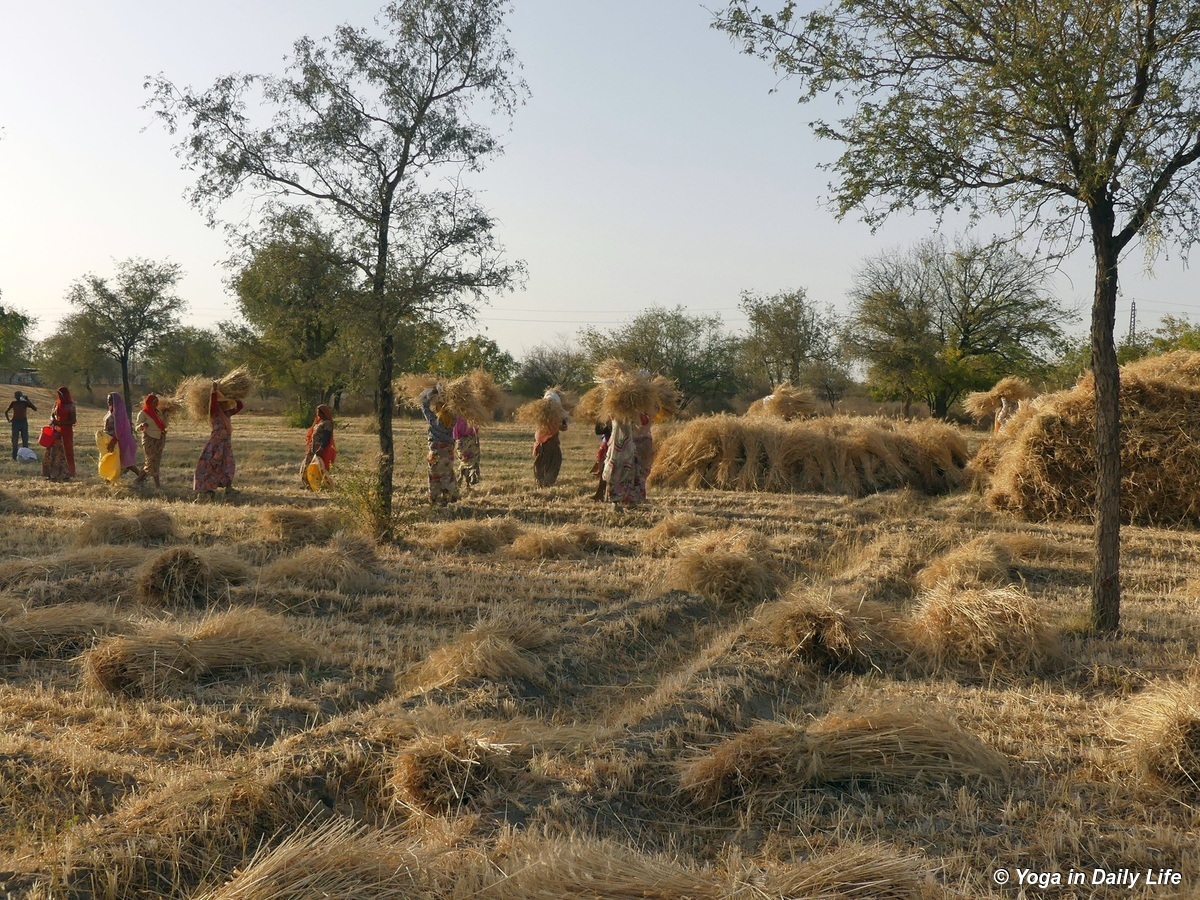 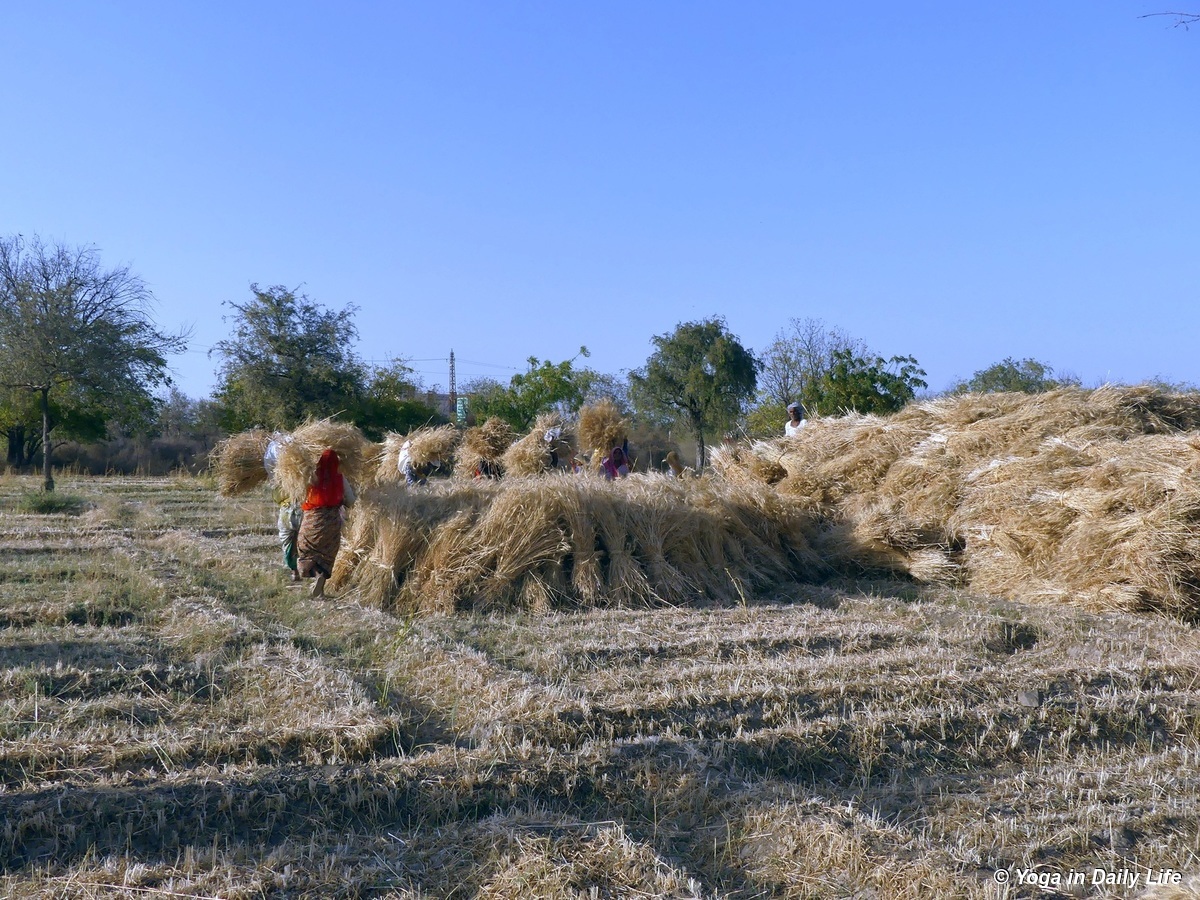 For the necessary shady work during the hot afternoons, we have been saving and cleaning salad and vegetable and flower seeds and harvesting roses, moringa and curry leaves etc. for drying, packing and selling. This job goes on until pre-monsoon.

Our four puppies are growing taller and longer and, in two cases, wider and have been well trained by Chandanpuri from Slovenia. Leela the calf is weaned from her milk bottle and Lakshmi should be by late April and both graze for four hours daily in the Shiv Bagh, until it gets hot. Finally it looks as though Champa the cat, who is barely a year old, may already be expecting!

So we karma yogis of Jadan have a front row in the hot seat for many weeks to come and as appetites decrease and thirst increases and tempers fray, I request all bhaktas to send us cooling thoughts, because our work here does not decrease and there is no swimming or ice cream! 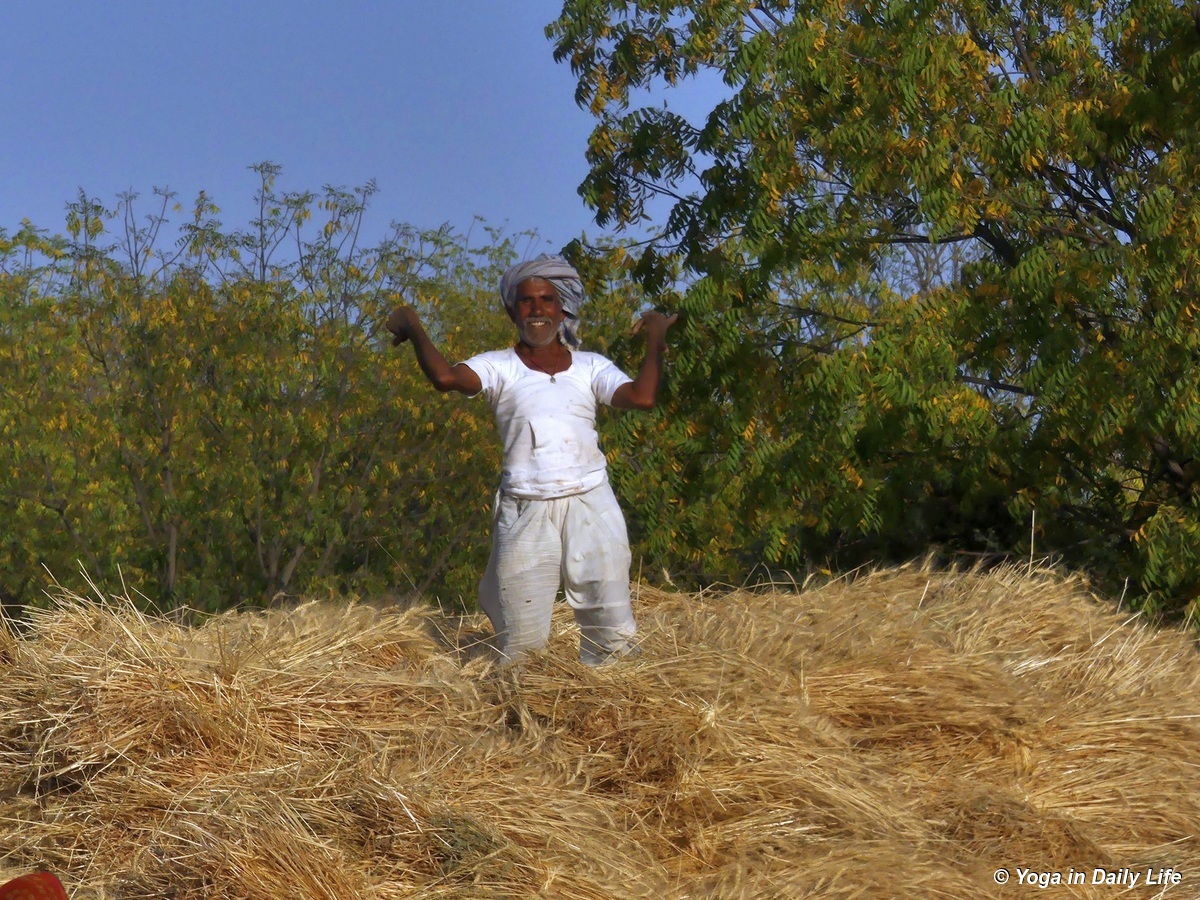 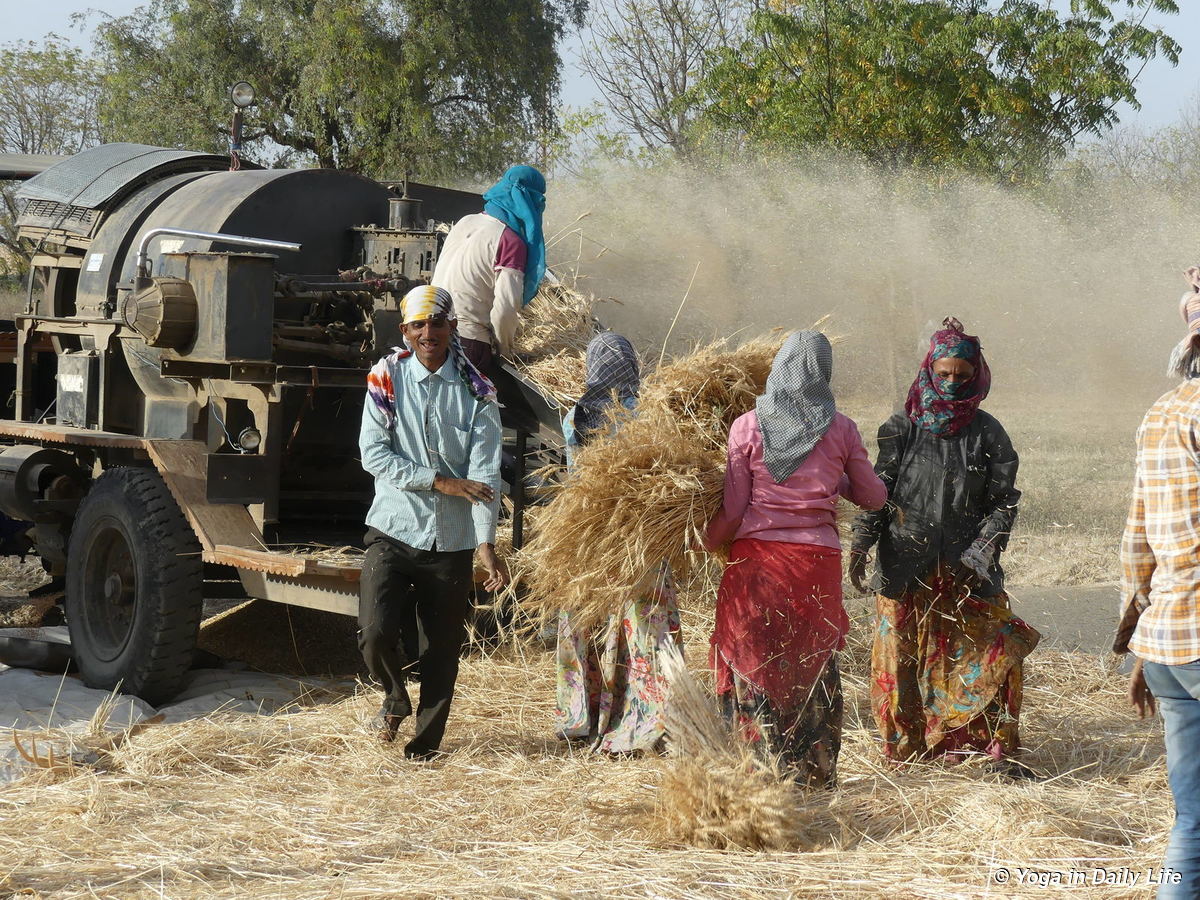 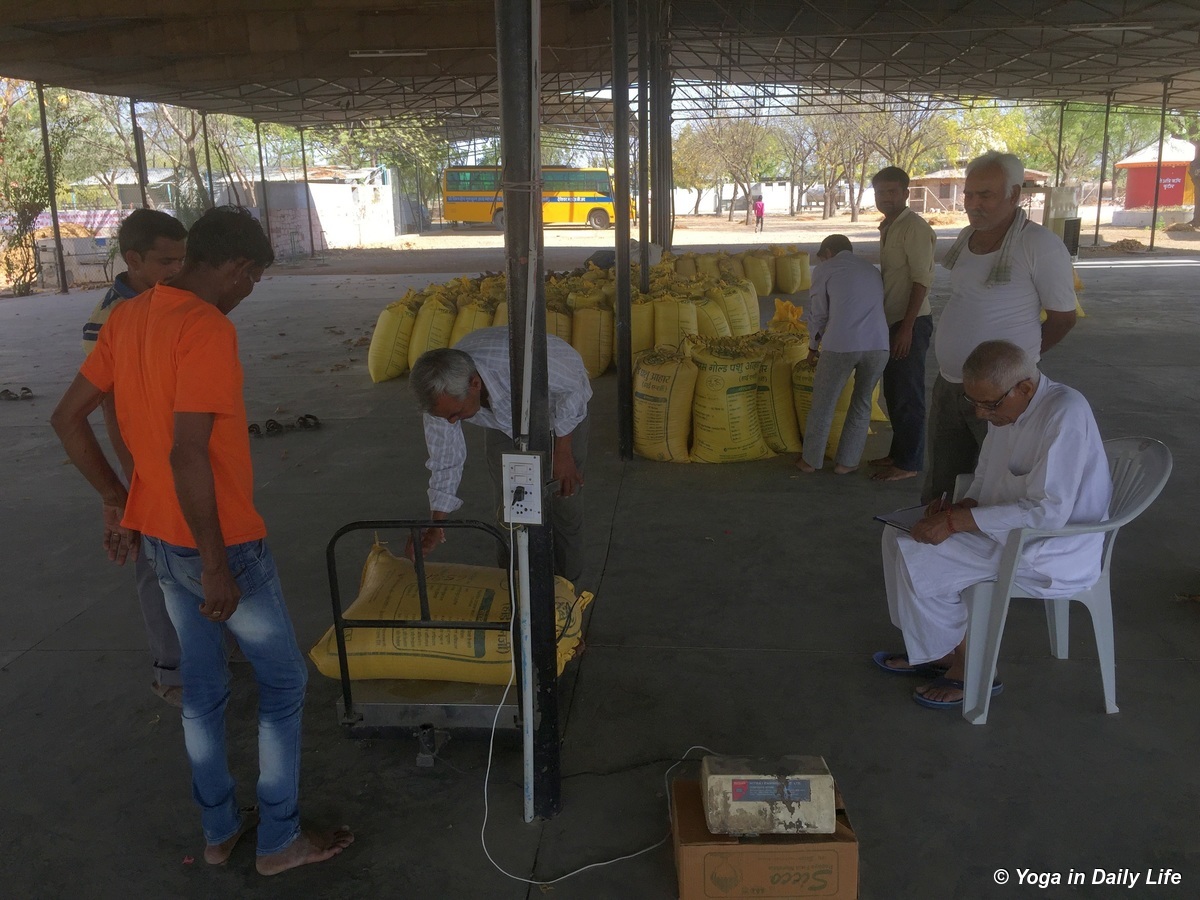 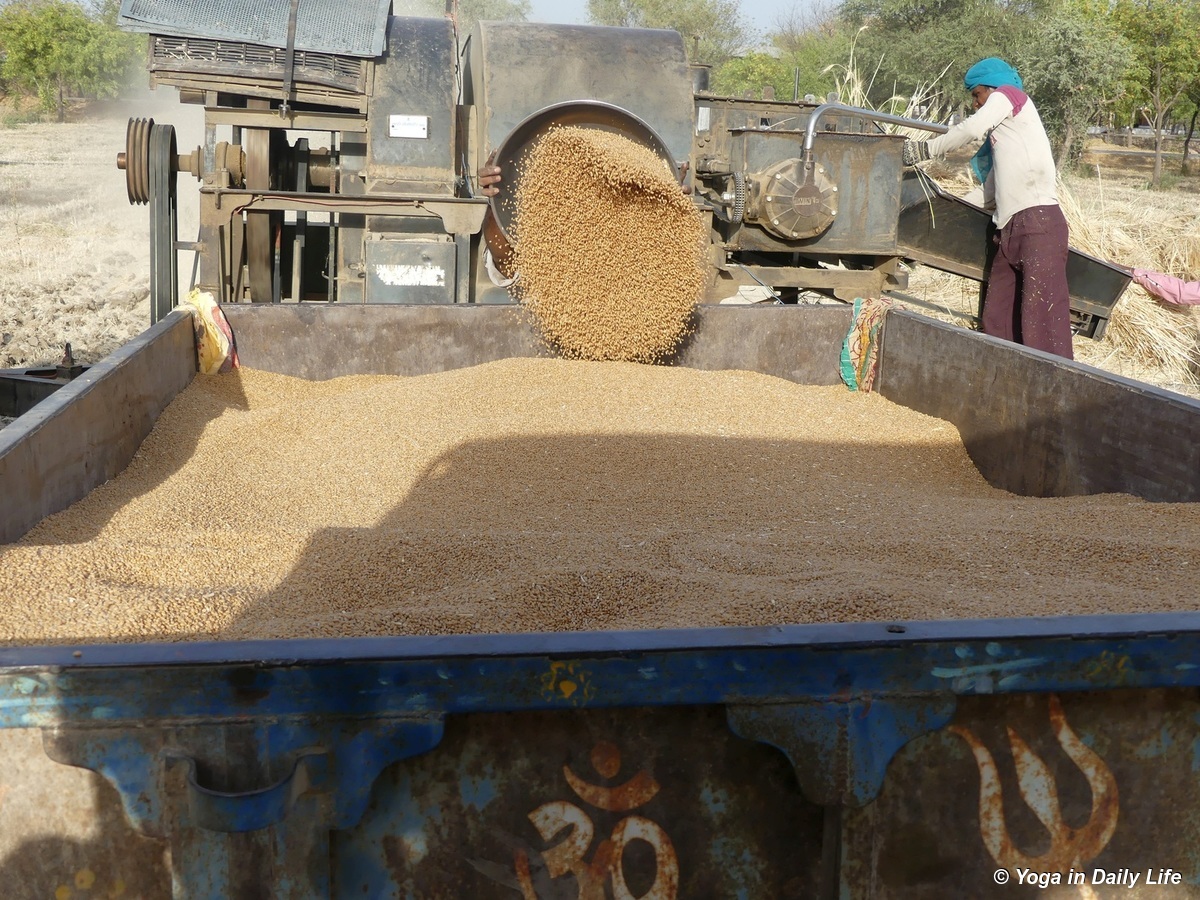