﻿May 2018 in Jadan Organic Gardens – Record Heatwave and Survival Mode

Here in Jadan the mercury reached 48.5 Celsius on the 28th May and 48.4 on the 29th. By the 30th of this month the death toll from heat in Pakistan was officially 65 and there have been more than 1000 deaths in India to date. 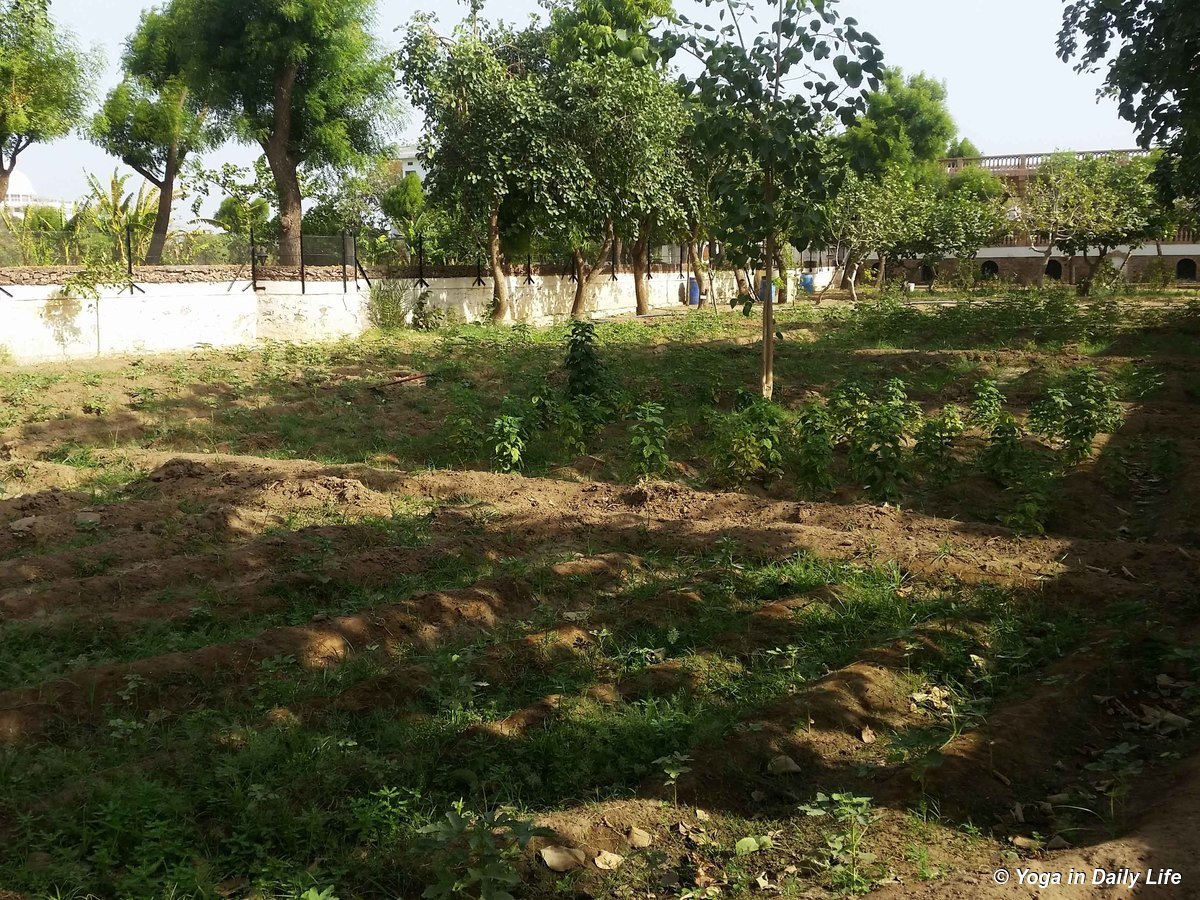 As the Kilauea volcano erupts in Hawaii, forest fires rage in Eastern Russia and subtropical storms create havoc in the southeastern United States, I am starting to wonder whether the greenhouse warming of the last century is now beginning to peak. It would appear that the experts have warned of such natural disasters over the coming decade.

So perhaps it is now or never for grassroots actions to begin, with regard to the disuse as opposed to the misuse of chemical sprays and toxic outpourings from industrial plants. There are so many things being consumed on this planet that have no meaning and no necessity. We, as humans, have become so alienated from our natural origins and it feels as though Prakriti Ma (Mother Earth) is trying to shake us off her body now – we humans and our actions are just too great a burden to bear. 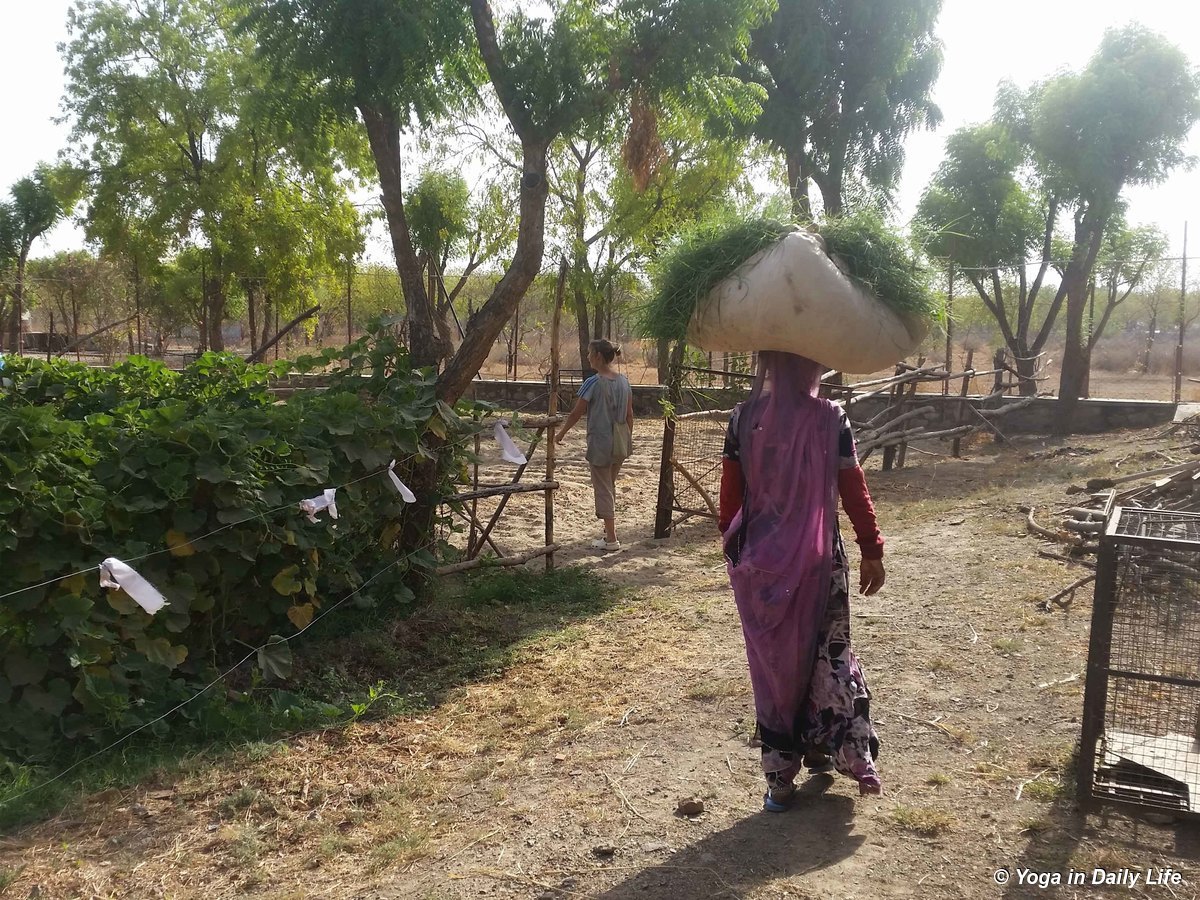 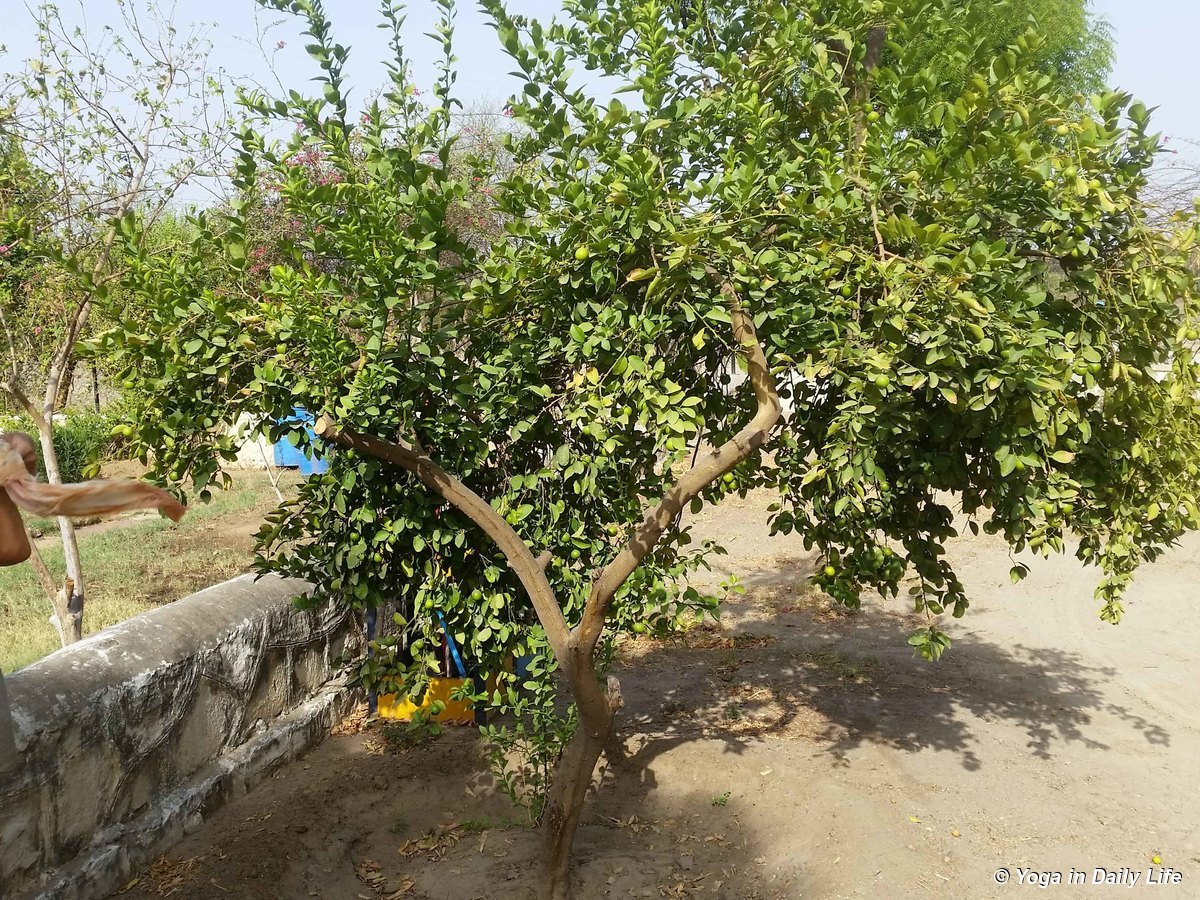 Here in Jadan, the gardens produced 213kg of produce this month and there was an aggregate combined irrigation time of 111 hours in Madhuvaani and Shiv Bagh gardens from the blessed talab, which towards the end of the month developed a layer of noisome algae on its surface that needed to be manually removed – welcome yet another form of organic fertilizer!

The news came in by the 28th that the southeastern monsoon had already reached Kerala and Tamil Nadu and so there is talk of pre-monsoon activity around here by June 12th. Sure enough, during the last days of this month it became more humid and hazy, but no less hot – a gorgeous combination for the purpose of ripening hard green papayas! 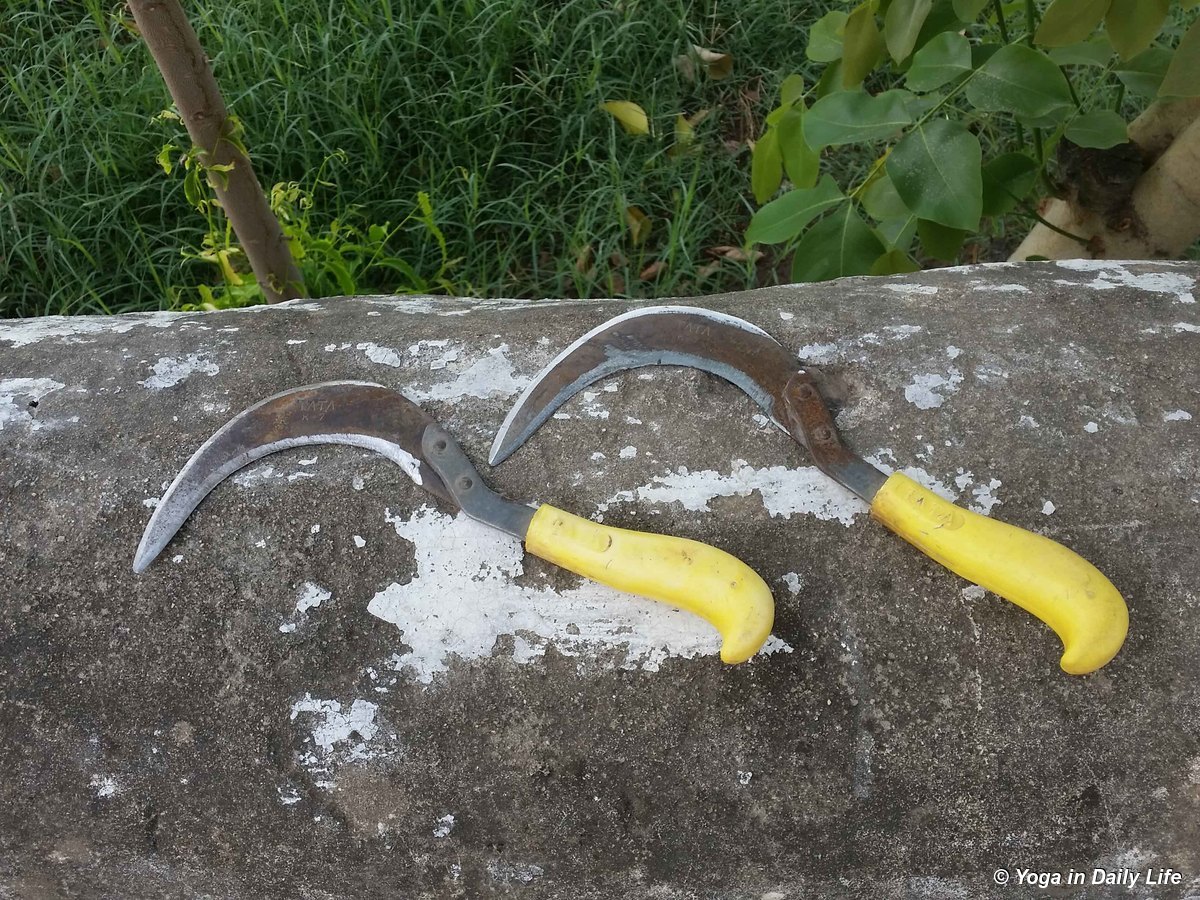 It has now been over 40 degrees Celsius every day since March 25th and we have had but 30 minutes of rain since the end of last August. Enough is enough – something’s got to give. Even the most stalwart of trees and desert shrubs are showing signs of heat exhaustion – browning around the edges of their leaves. If they could make a sound I feel that they would be screaming for rain as our papaiya birds (chatak – Sanskrit name; or pied crested cuckoo) are – all day long – crying plaintively for the heavens to open. These soulful birds drink no other water, however thirsty they may become. In Latin they are known as Clamator jacobinus. They call upon Megh (the Lord of the Rains) and it is said that their call is always rewarded with a downpour. This rain bird is said to breed in the Sahara desert and then eastwards towards India. In many bhajans, saints have named this bird – it has become a symbol for the ideal spiritual seeker who ignores all worldly things and quenches its thirst from spiritual practices, satsang and the darshan of wise souls.

“While the rivers of Ganga, Yamuna and Saraswati and the seven seas abrim with plenty of water,
O Tulsi, in the Chatak bird’s view, everything without the drop of rain is as mere dust.” 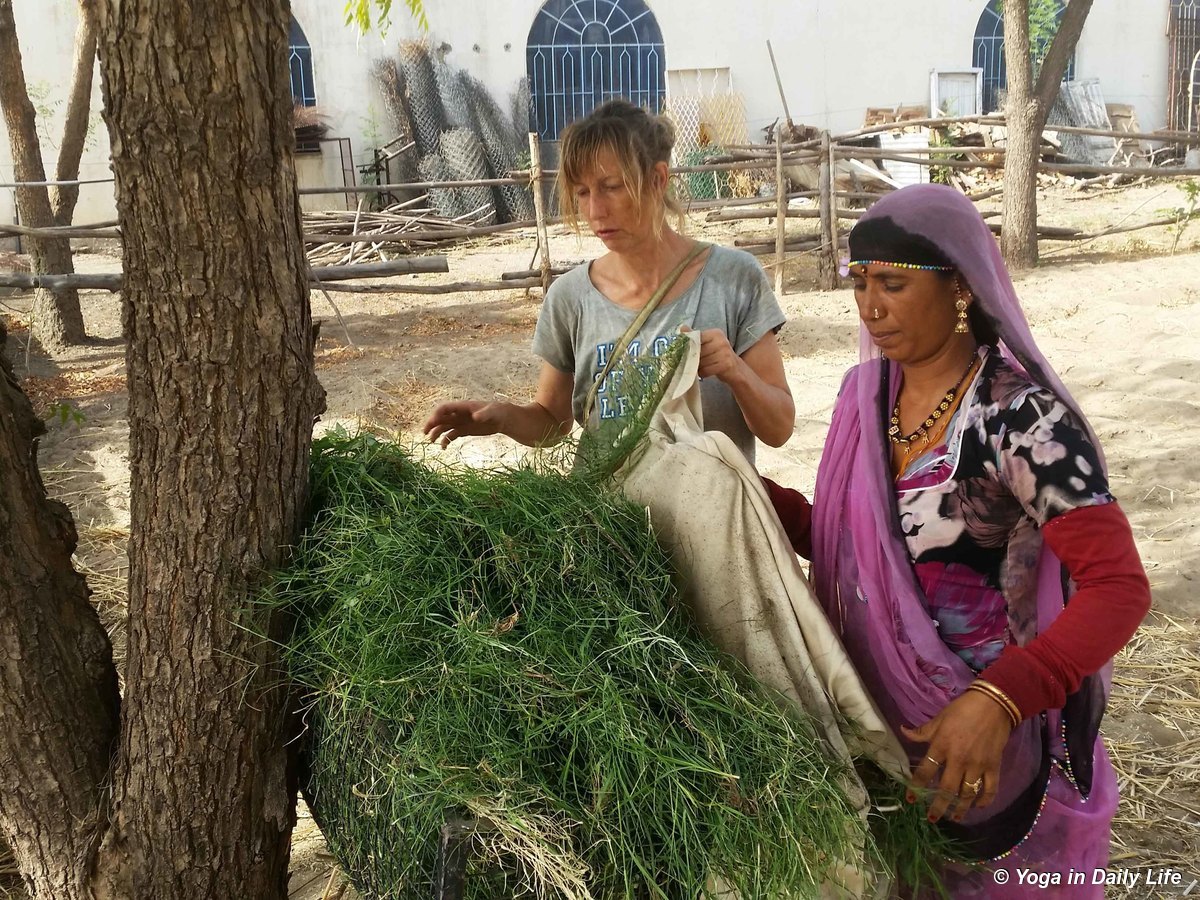 In spite of the heat however, we were blessed with about a kilo of sweet cucumbers everyday, which when garnished with our own minced garlic, curry leaves and a little black salt and powdered mint, make a delicious addition to morning moong daliya (creamed cracked wheat cooked with moong daal). There was also quite a lot of lauki until the hot Loo completed fried to a dry crisp the soft white flowers, which bloom tenderly morning and evening.

Towards the end of the month, thoughts turn towards monsoon planting – where to put to corn this year and when to plant cowpeas (chawla) and pumpkin and kheera kakdi. We have been replanting our bhindi (okra) area weekly so that, as the bhindi plants mature, there are new plants coming up amongst them. Some guar phali (cluster beans) appeared on some of the Shiv Bagh plants this month and we enjoyed a few mixed sabjis of chandaliya, toru, lauki and guar phali. Okra is best enjoyed when combined with some aloo (potato). 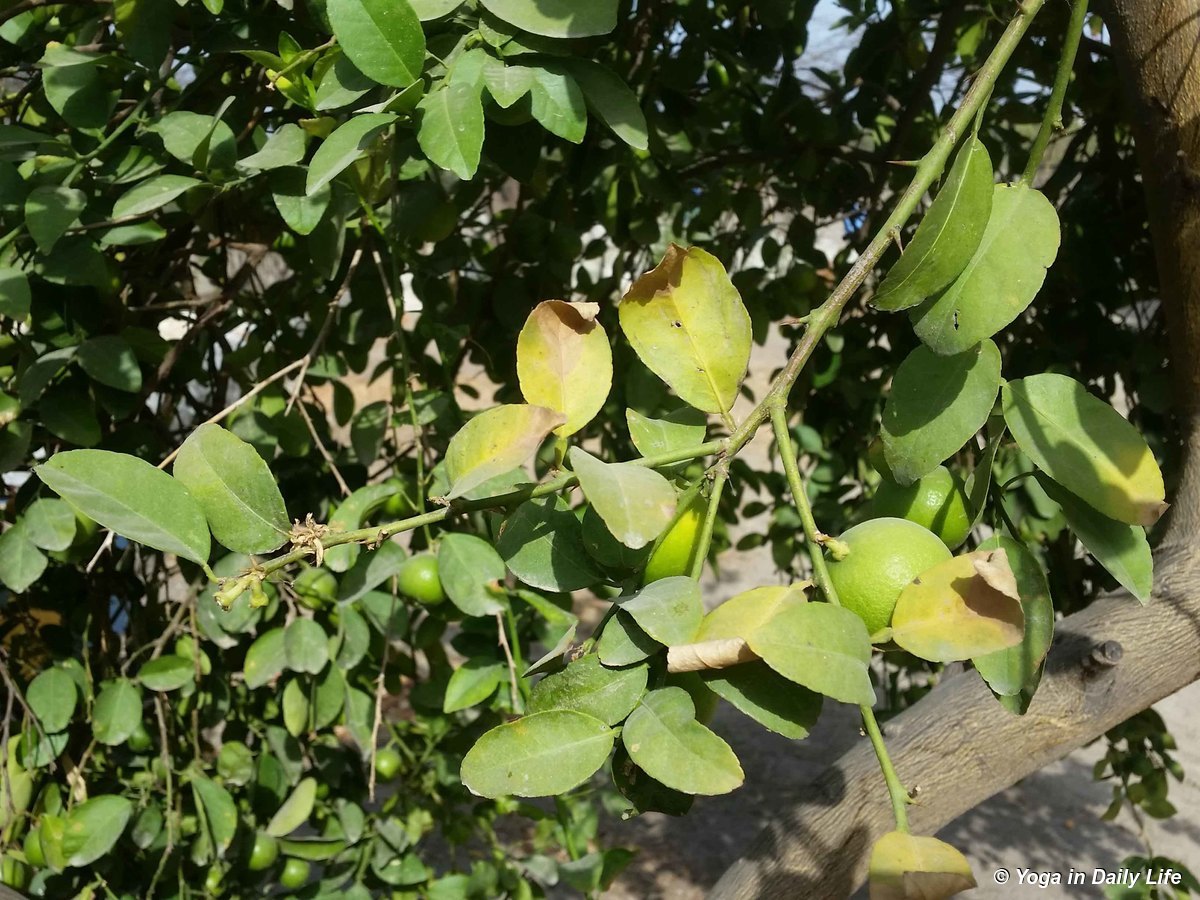 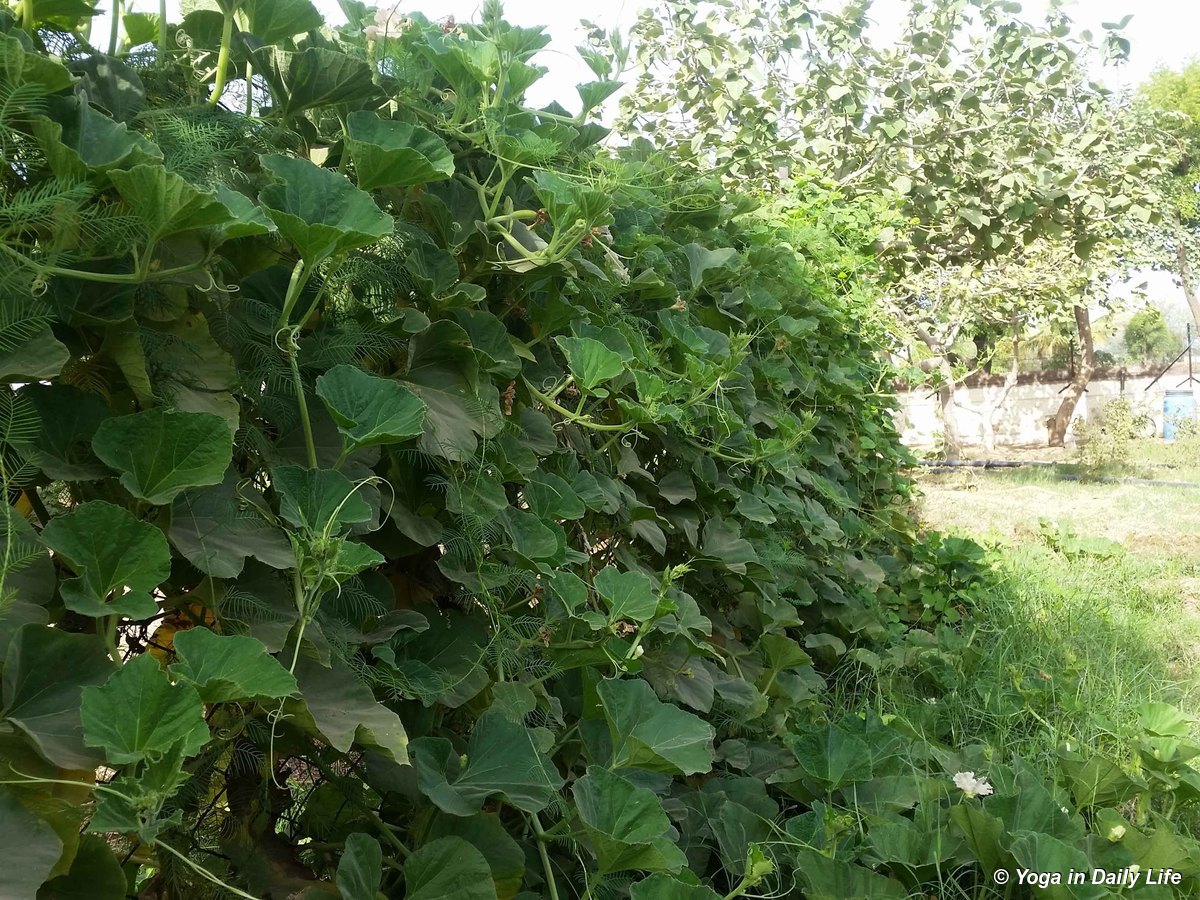 Irrigation took place morning and evening, and was very intensive. Weeding was also intensive, and some winter and spring flowers had dried to a crisp and needed to be removed from the centre of the Shiv Bagh.

During his visit this month, Swamiji managed to inspire some of the karma yogis to do a little weeding each day, and so the east sitaphal line (a row of custard apple saplings) is now being nicely maintained, as is the paved footpath. Our horses are so happy to have freshly cut Bermuda grass brought to them in their night paddock, east of the eating verandah, and have also been enjoying some watermelon skins!

Monsoon predictions for 2018 are good, which hopefully means July and August will be equally rainy. A dry August spells disaster for rain fed crops in this area. 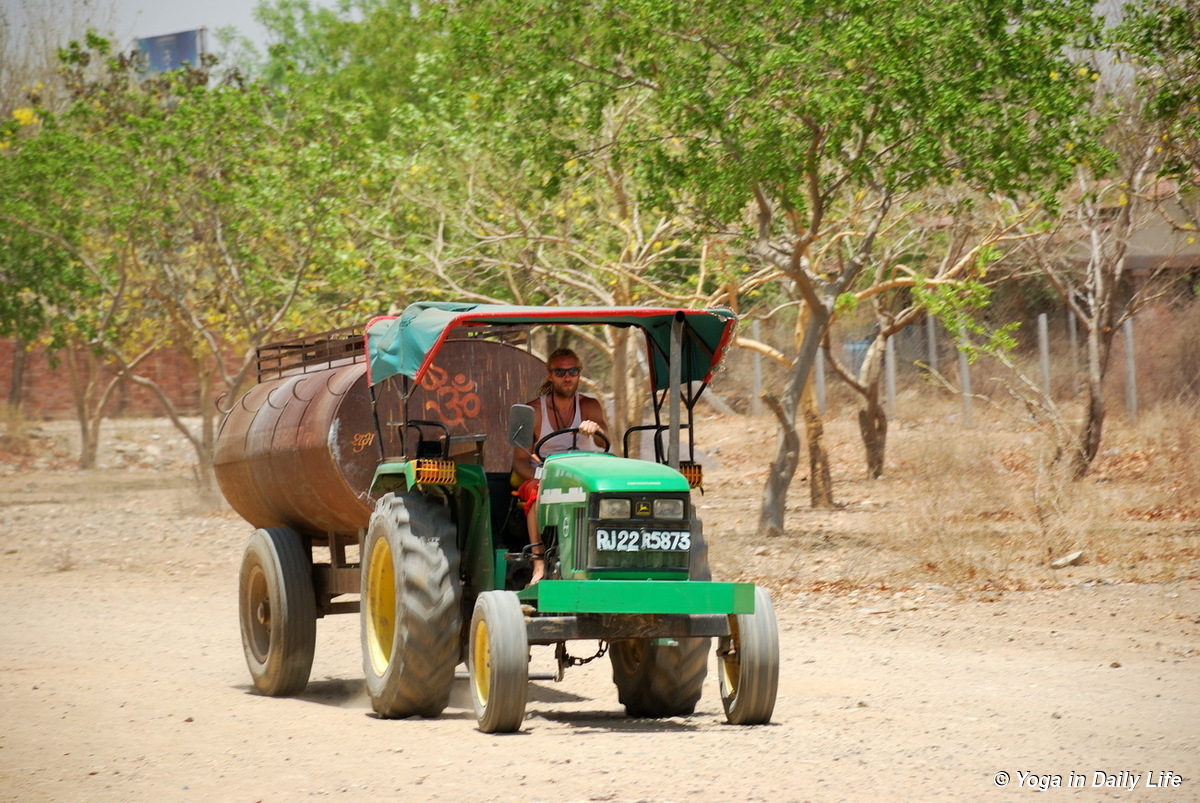 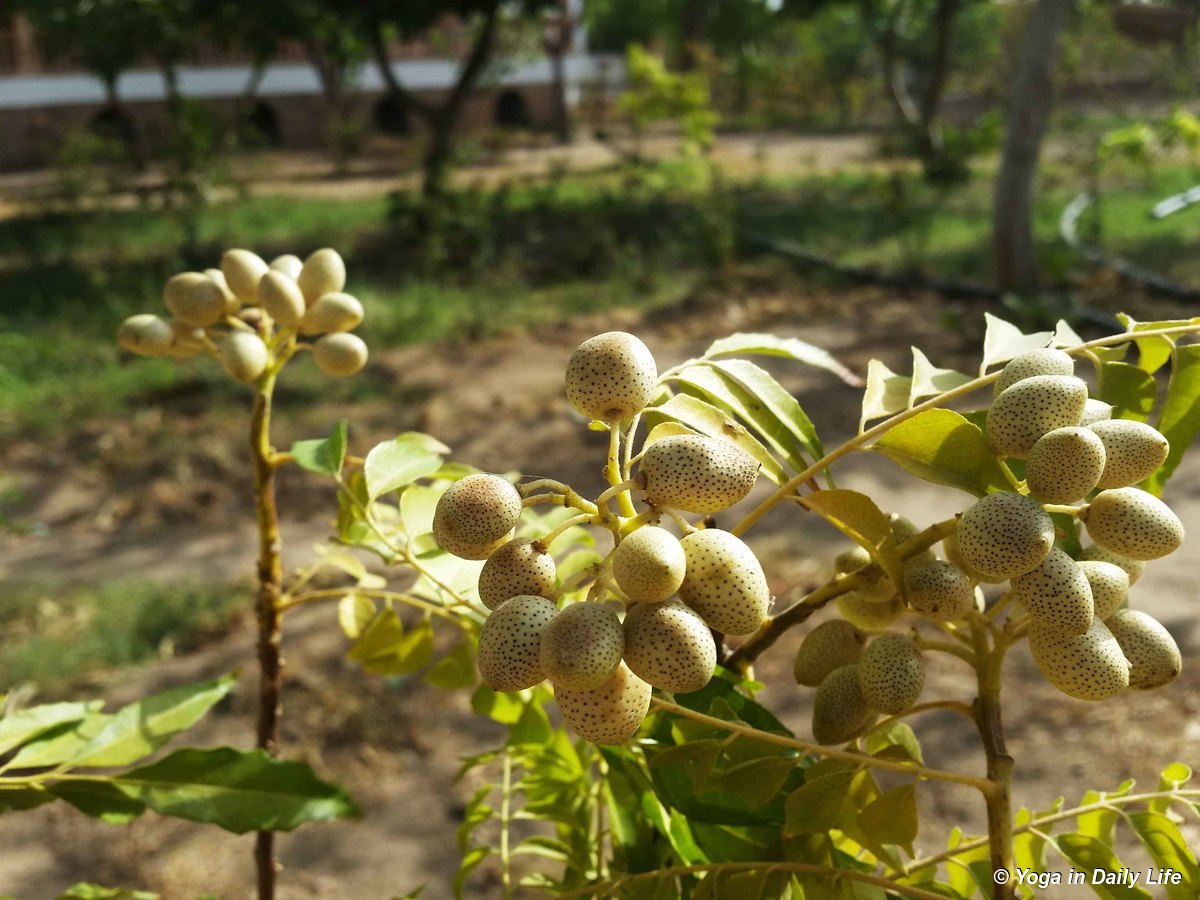 For the Organic Store, preparations of leaf drying began with moringa, curry leaves and mint. Once the pre-monsoon humidity kicks in, it is much harder to dry them, so it is now or never. Moringa leaves are a viable and organic alternative to fresh salad when it is not available. Better to consume something that is pure, rather than something that has only the appearance of being fresh but which in contains a toxic cocktail of carcinogenic chemicals. Eat smart! Grow your own or green super food it! And remember – even organically certified produce may have been cold-stored and may have been harvested some weeks before, in which case it is not worth spending your hard earned dosh on! Please locate and acquaint yourselves with the organic farmers in your area and support their stalls at local markets. Some are even willing to deliver fresh farm produce to your door. Why not avail yourselves of this humble and well-intended service. 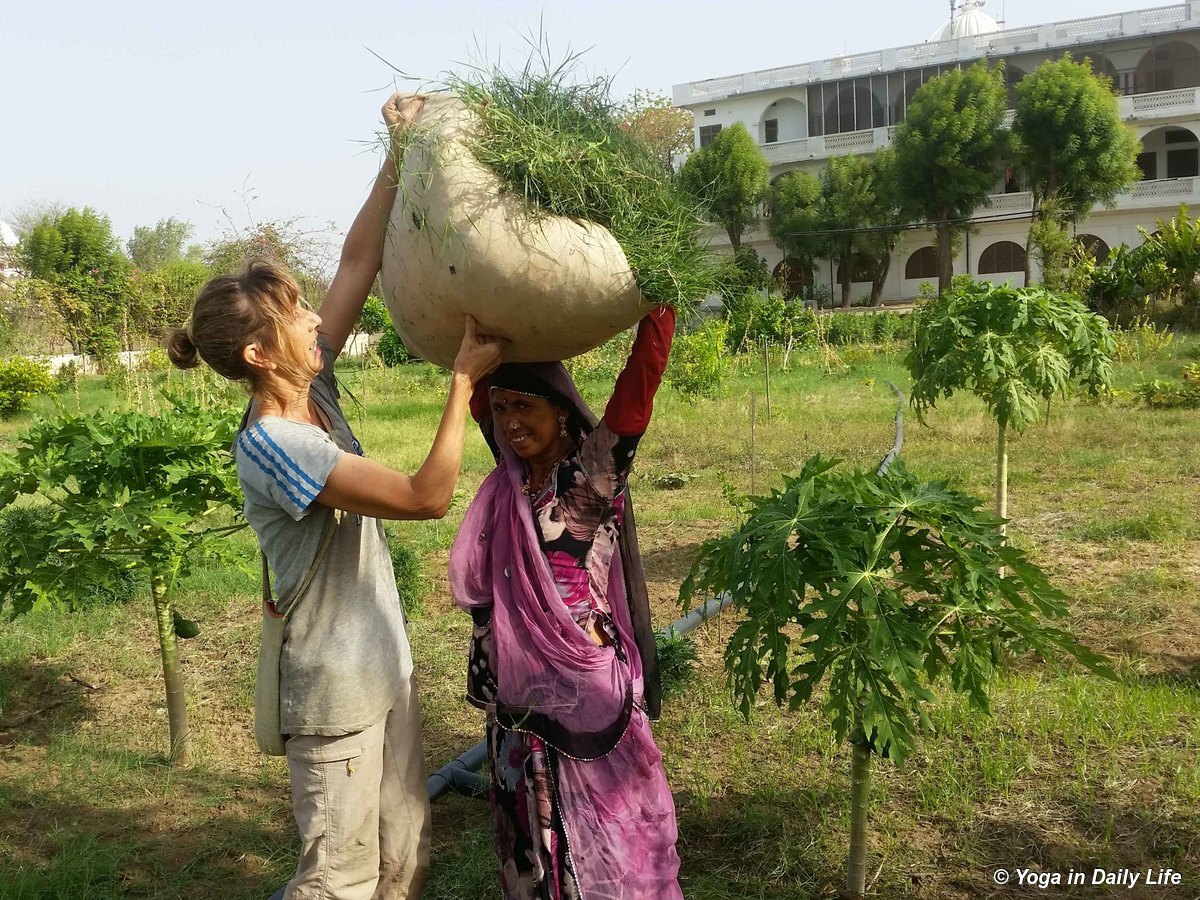 Guru Purnima is on Friday 27th of July this year and so the group will surely see a lot of rain during their visit. On the 21st of June, International Yoga Day will be officially celebrated this year in India in Dehradun, close to the Forest Research Institute (a deemed university since 1991), which is the capital city of the northern state of Uttarakhand. It has been reported that this part of India is very close to PM Modi Ji’s heart. More than 60,000 participants are expected to be practicing with the Prime Minister on this day. We shall also be doing something here in Jadan, most probably in 80% humidity!

Tree watering around the ashram has also been very intensive this month – and it was mostly done at night, starting around 7.30pm – Swamiji asked us to dig deeper pits around the trees around the Shiv Mandir that struggle to grow, and he requested for the whole area to be flooded with water so that the roots could drink deeply. Drinking deeply is key to the survival of all life forms throughout all drought-stricken arid areas. We live a privileged life here with water filter machines that give us cooled water to drink. Watermelons and gourds and cucumbers all require a huge amount of water if they are to grow properly and these are the things that humans enjoy most during hot dry months. We need a world where these plants are grown in bulk in all dry and drought affected areas using efficient irrigation systems and locally produced compost. Swamiji has taught us too about the usage of watermelon rinds (tarbooz ke chhilke) as a highly nutritious vegetable, which helps to clean blood vessels, thereby lowering blood pressure.