NEWS FROM JADAN GARDENS IN SPRING AND EARLY SUMMER - MARCH 2017

I must first say what a beautiful group it was from late February until Holi, and many many thanks for all the excellent and skilled help received in the gardens, especially with the pruning of the golden hedge in the Shiv Bagh.

The timing climatically was perfect, as it was still under 35 degrees celsius and there was still plenty of winter lettuce left – in fact I do not know what we would have done with it, had you all not consumed it – and also the carrots!

The last ten days of the month on the other hand, were a reminder of things to come, and as the thermometer reached 43 degrees celsius there was nothing to do but to batten down the hatches and start watering like there is no tomorrow, in order to keep everything alive, and that includes us humans – now is the time for rehydrating and energy rich drinks, juices and smoothies, and above all buttermilk and mint tea. 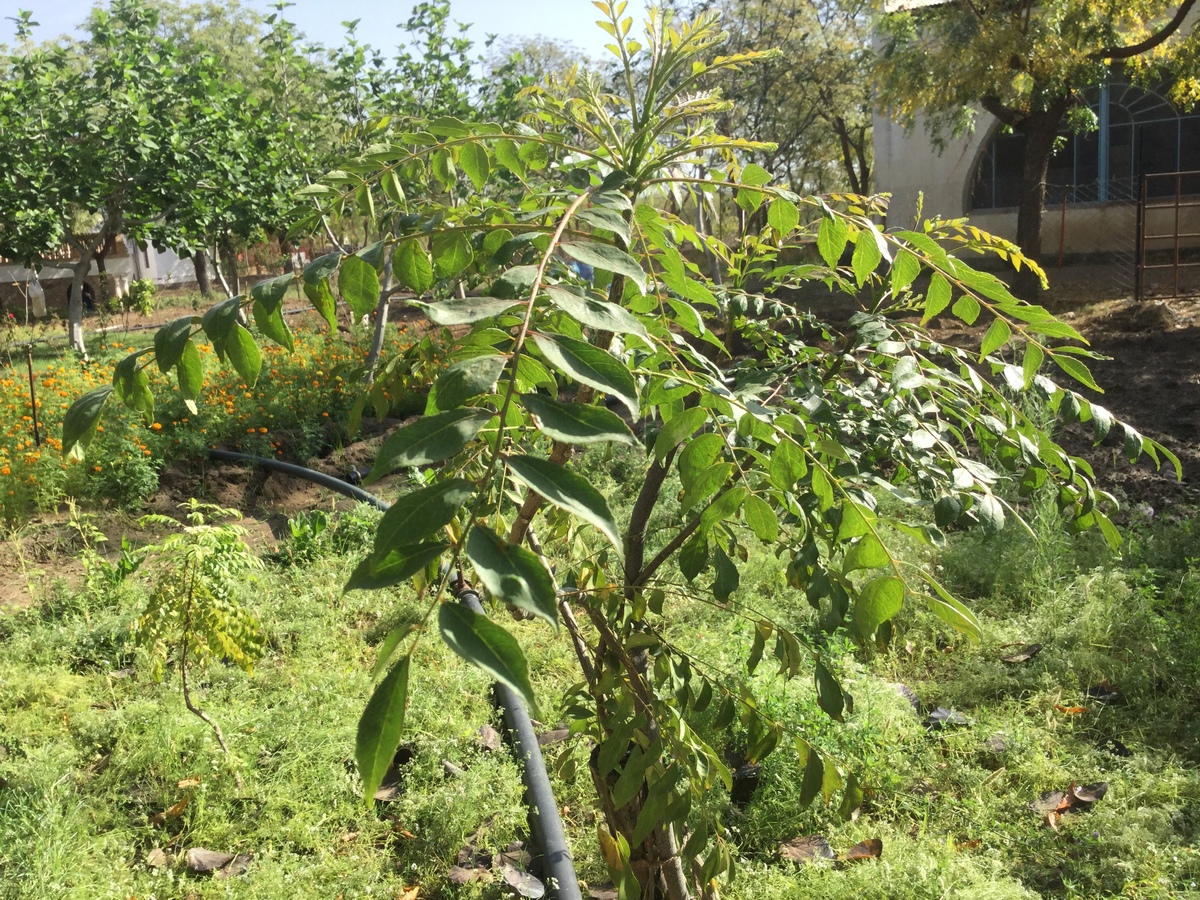 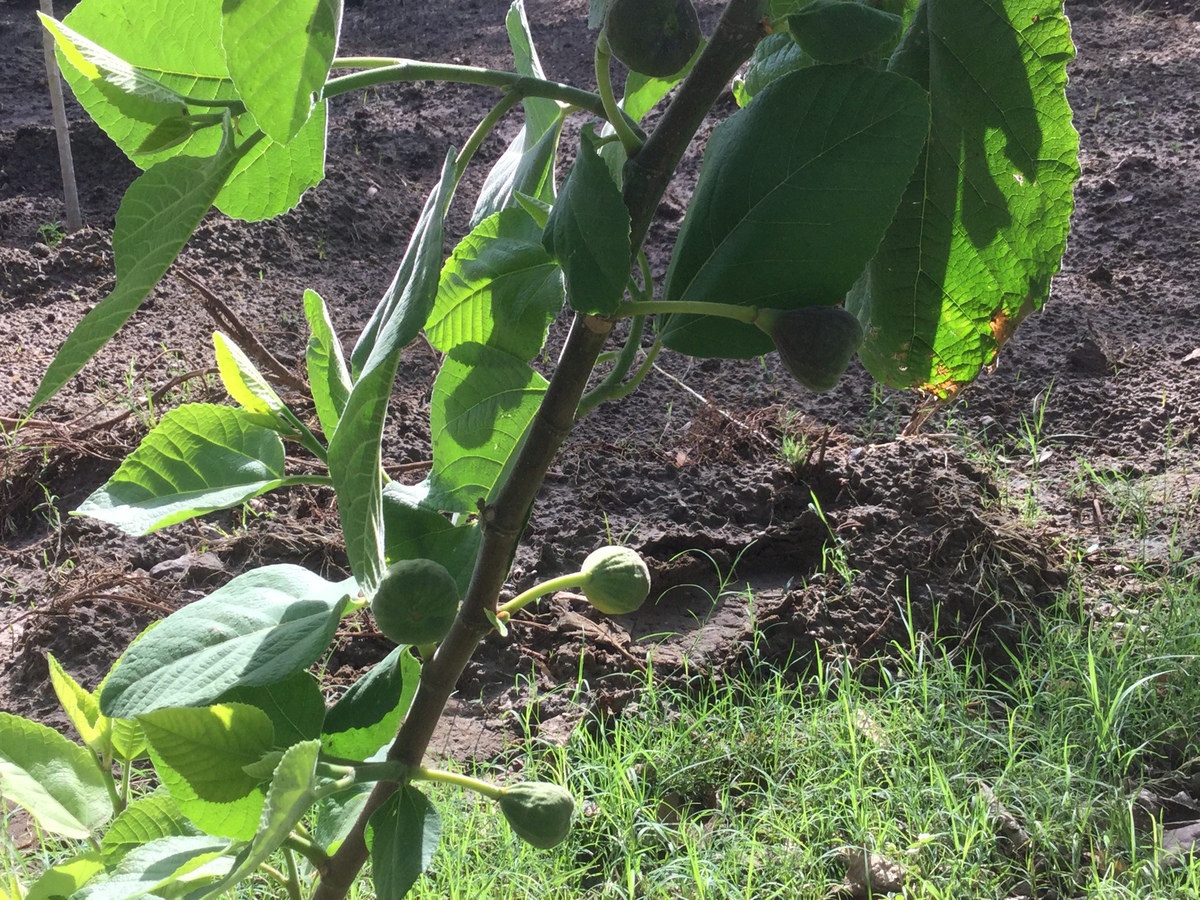 The tomato season began well this month and we harvested more than 100kg from the small area that was previously composted. This preparation lessened the growth of weeds in the area and made the soil super fertile – we've only needed to weed the two beds once since the seeds were planted in December last year. The plants are now so bushy that there is an undergrowth of juicy red fruits that are protected from the sun by the upper leaves, and also from our naughty chipmunks who are always on the lookout for a tasty and refreshing snack, not to mention the occasional gray langur monkey who bounds around the Shiv Bagh from time to time. 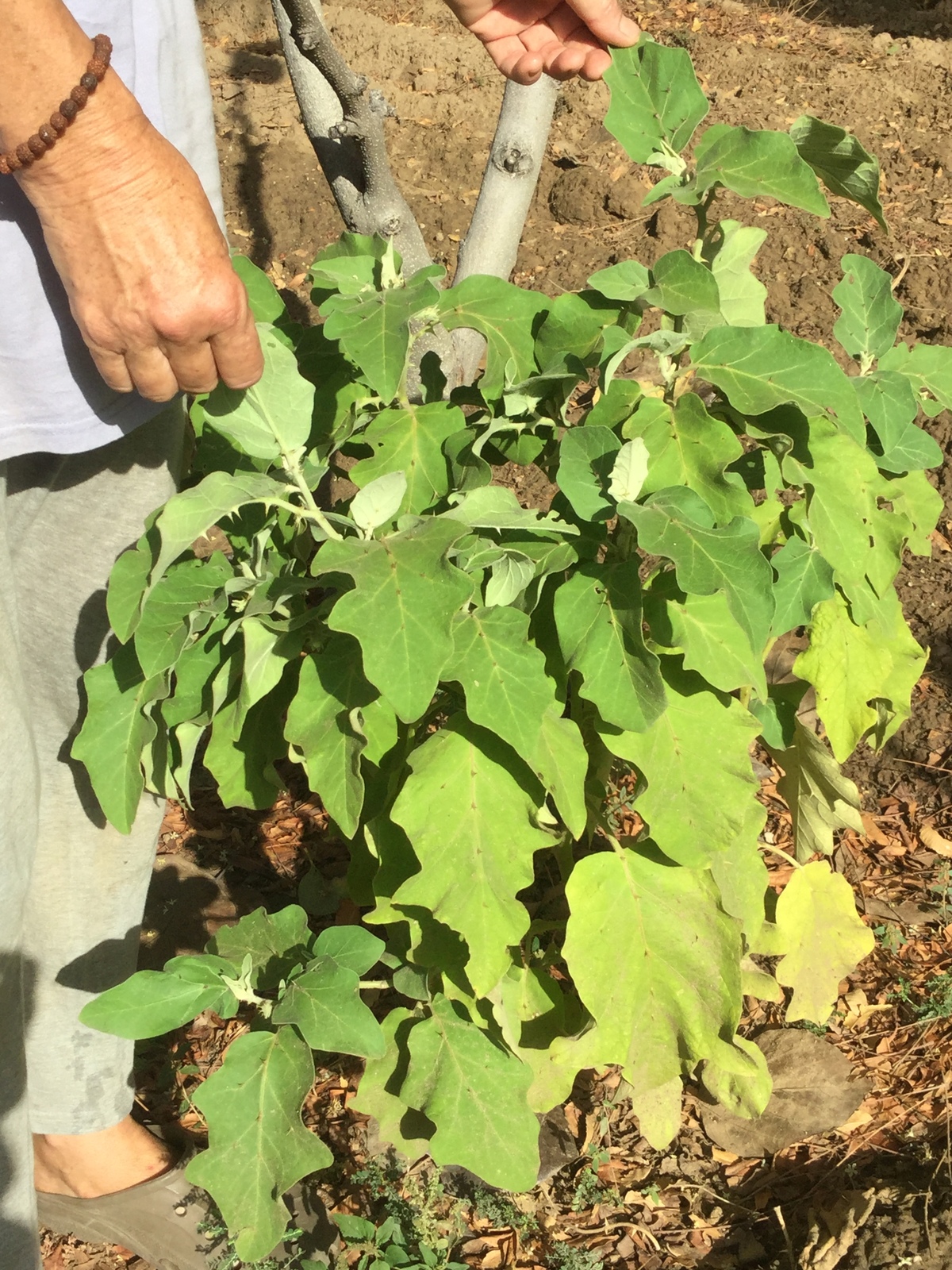 We made a similar bed for our long skinny Indian cucumber variety near the workshop, and a thick layer of 18 month old compost was shifted by the JCB, which also cleaned a lot of plant litter behind the cool room. A new fence was then made for the horse’s summer night paddock, since the mustard and corn and oat field finished up this month; and in the remaining part of the workshop garden tinsi (round gourd) and phoot kakdi, marigolds and chandaliya were planted. The seeds were broadcast and will be irrigated by sprinklers. 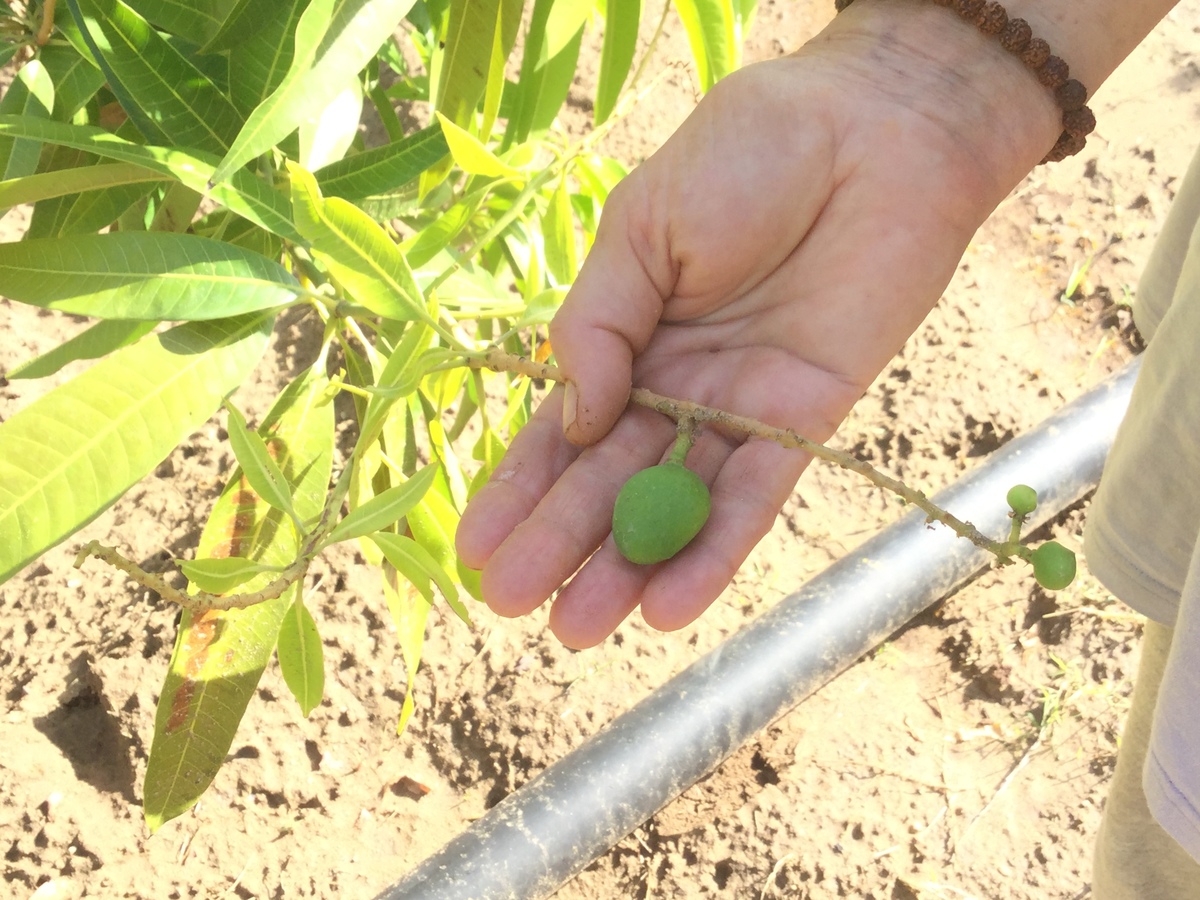 Finally a sign that mangoes are coming this monsoon

Our other summer seeds – lauki, bhindi, guar and more chandaliya – were sown two weeks earlier in the prepared east to west channels in the Shiv Bagh; and then two remained, so here we have sown some papaya seeds, as the only surviving tree in our 2016 shade house fell over this month, with the weight of its fruit! 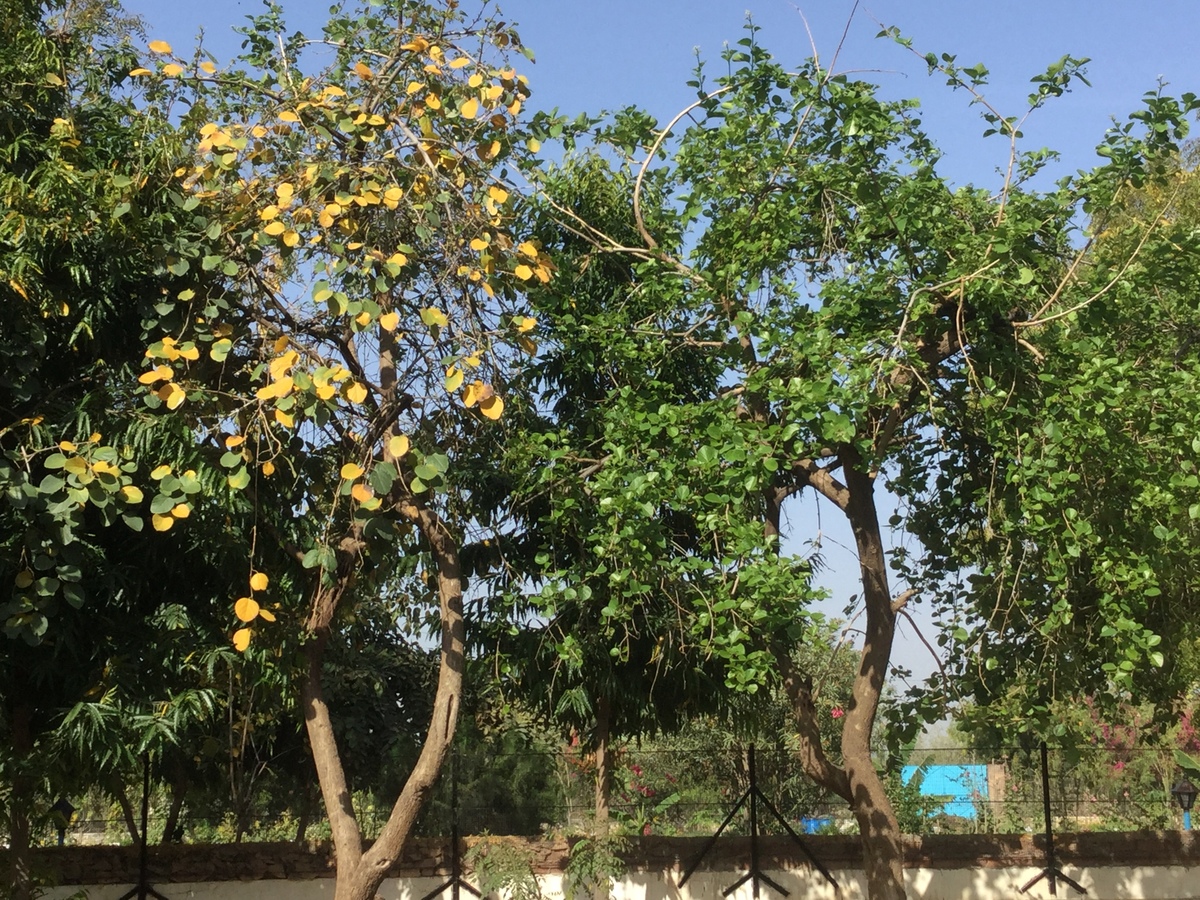 Gunda trees - on right side leaves were manually removed

There was another notable change in the climate this month on the evening and night of the 19th, when beautiful rain fell in torrents and the following morning huge puddles could be seen everywhere – joyful! 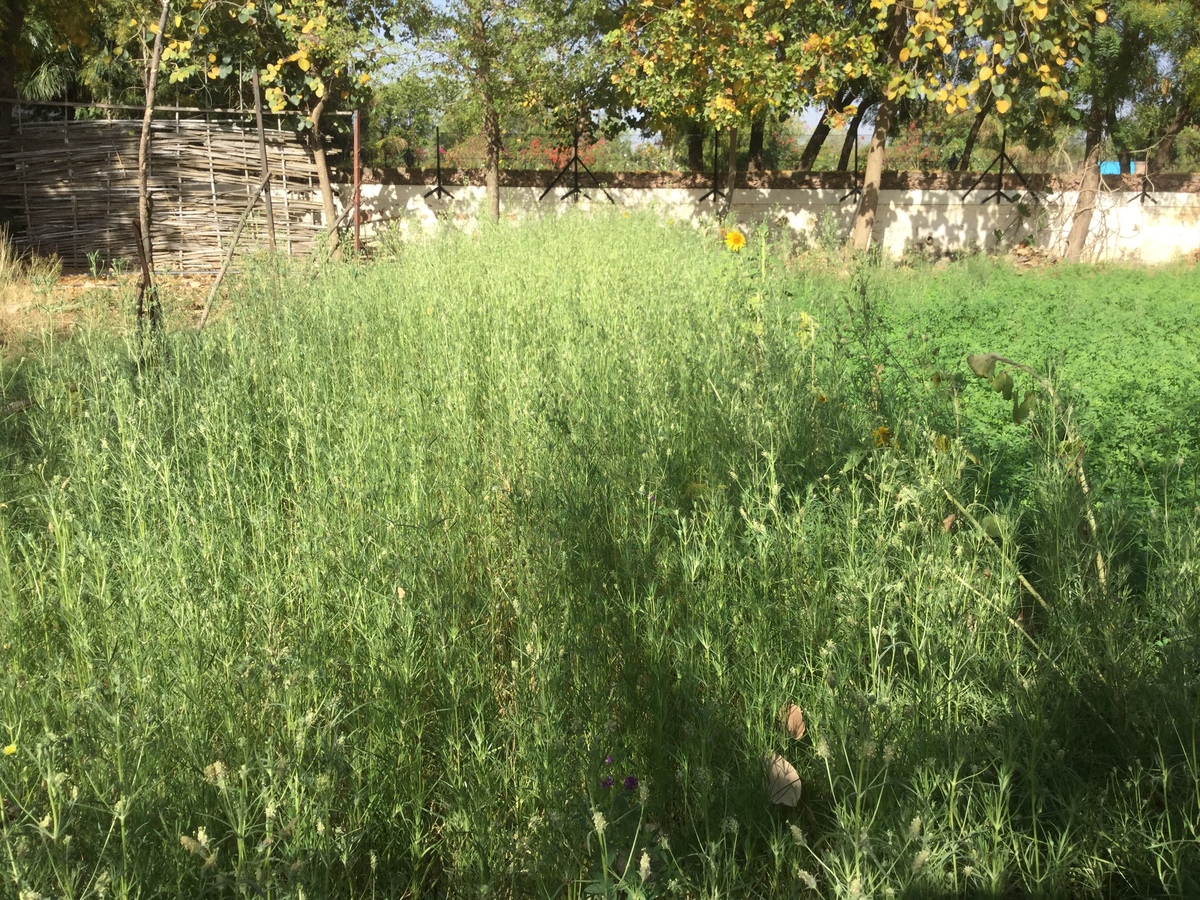 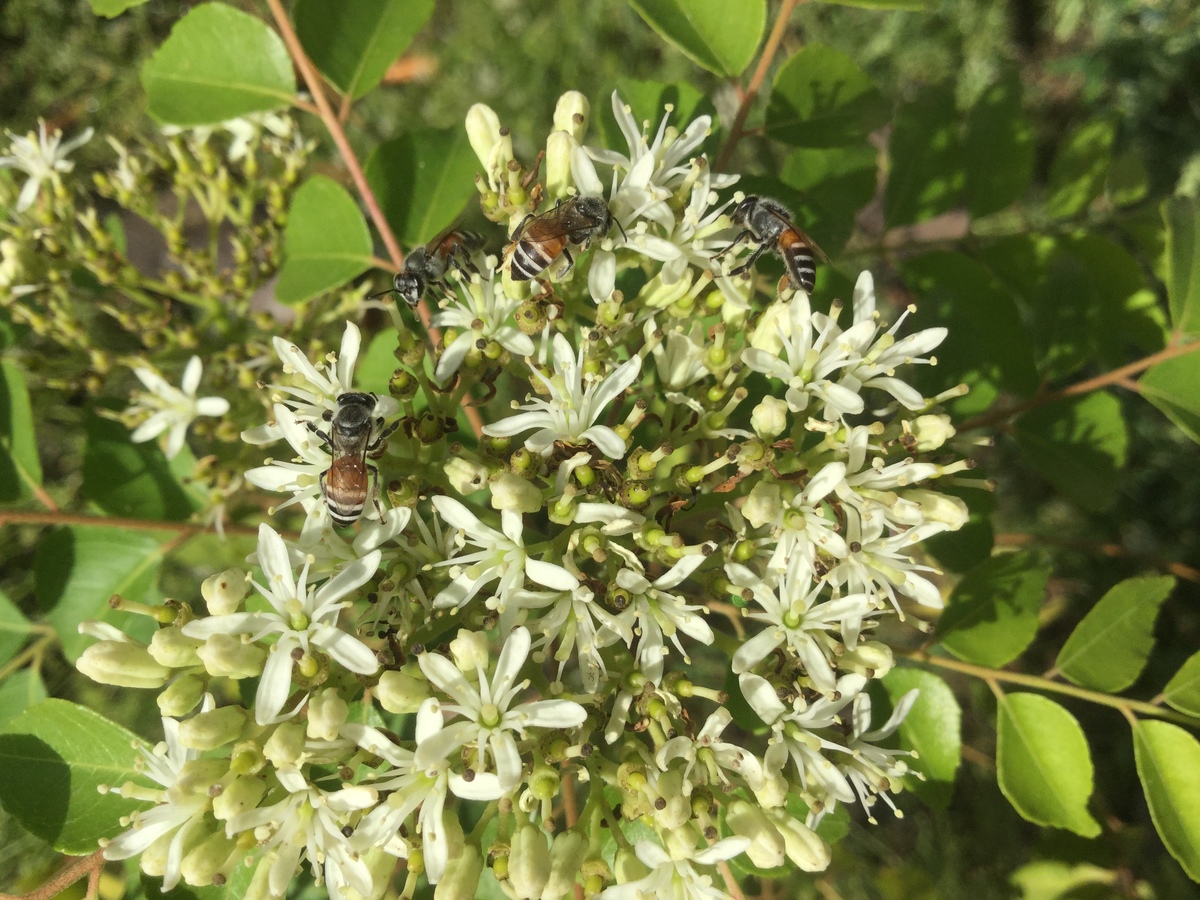 The garlic was harvested and put to dry in the shade; and the mowra (mahua) flowers (Madhuca longifolia/indica) started to fall after the 25th – more trees than last year, so we are collecting them each morning and sun drying them. They contain between 65-70% natural sugar. In Bihar a pickle is made from these flowers and given in a dosage of 2 teaspoonfuls daily to treat tuberculosis. They are cooling in nature. We collected some of their seeds last June and planted in the Shiv Bagh. After transplanting to pots, the saplings did not survive, so the remaining trees which are now 1 foot in height (30cm) will be left in their original germination site and irrigated by sprinklers.

Many more garden products will be prepared over the summer months and most of our seed cleaning has already been completed – fenugreek, roquette, salad and endive.

After the first weeding of the Shiv Bagh sabji (vegetables) there was a growth spurt in the bhindi and chandaliya, which was cut for the first time on the 31st. 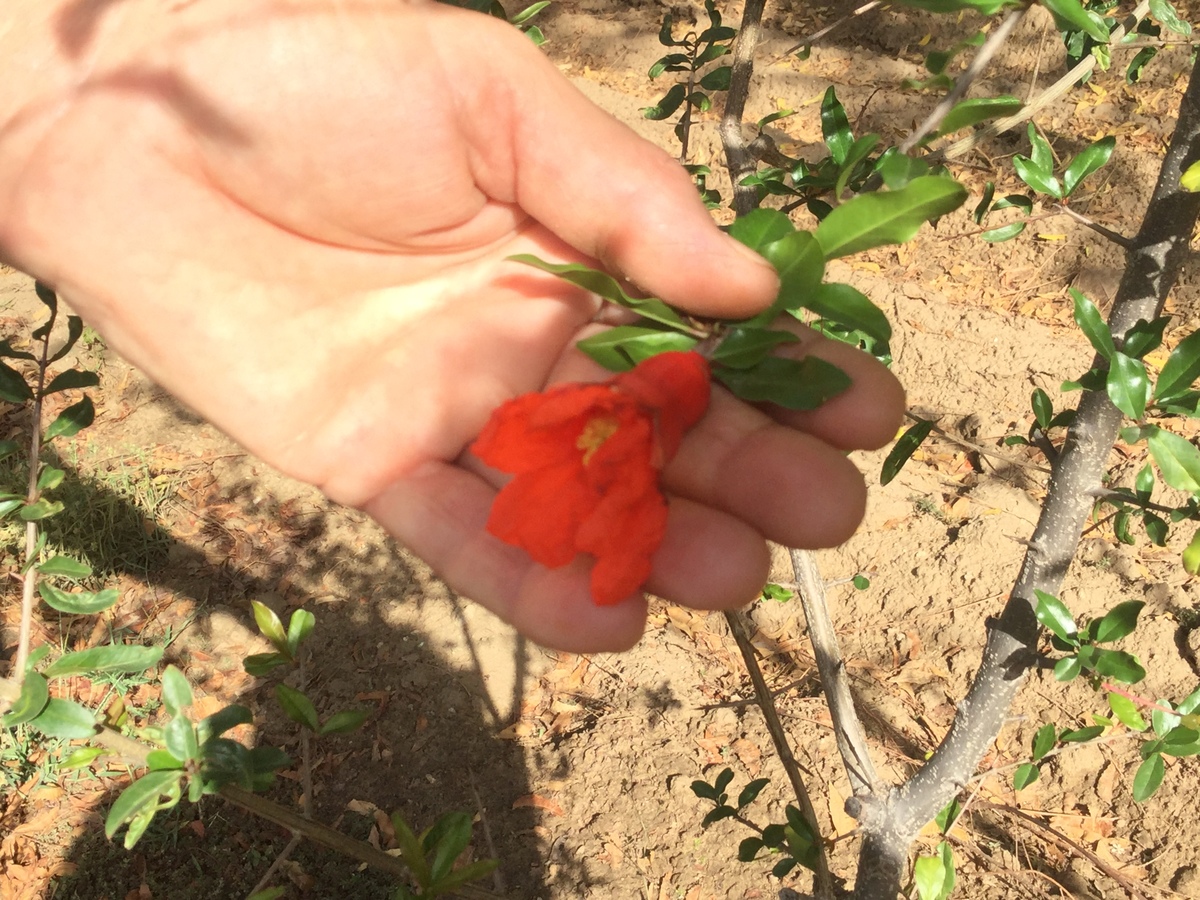 The medicinal and attractive flower of the pomegranate tree

In the Big Garden the gunda plantation was ploughed and sorghum (jowar) was sown in the whole area. This will provide fodder for our 60 or so milk cows during the hot season and until Diwali.

One of the most exciting discoveries this month was the sight of mini mango babies on two of our three mango trees in the workshop garden. Yes – we could have something by July, but only if we provide them with maximum security! Once the birds find out – it’s all over. The orange trees in the Shiv Bagh are also looking healthy and are growing well. They will turn 4 this monsoon, and have spent a long time fixing their roots into the ground so maybe next year they will start to fruit – not even a flower to date. 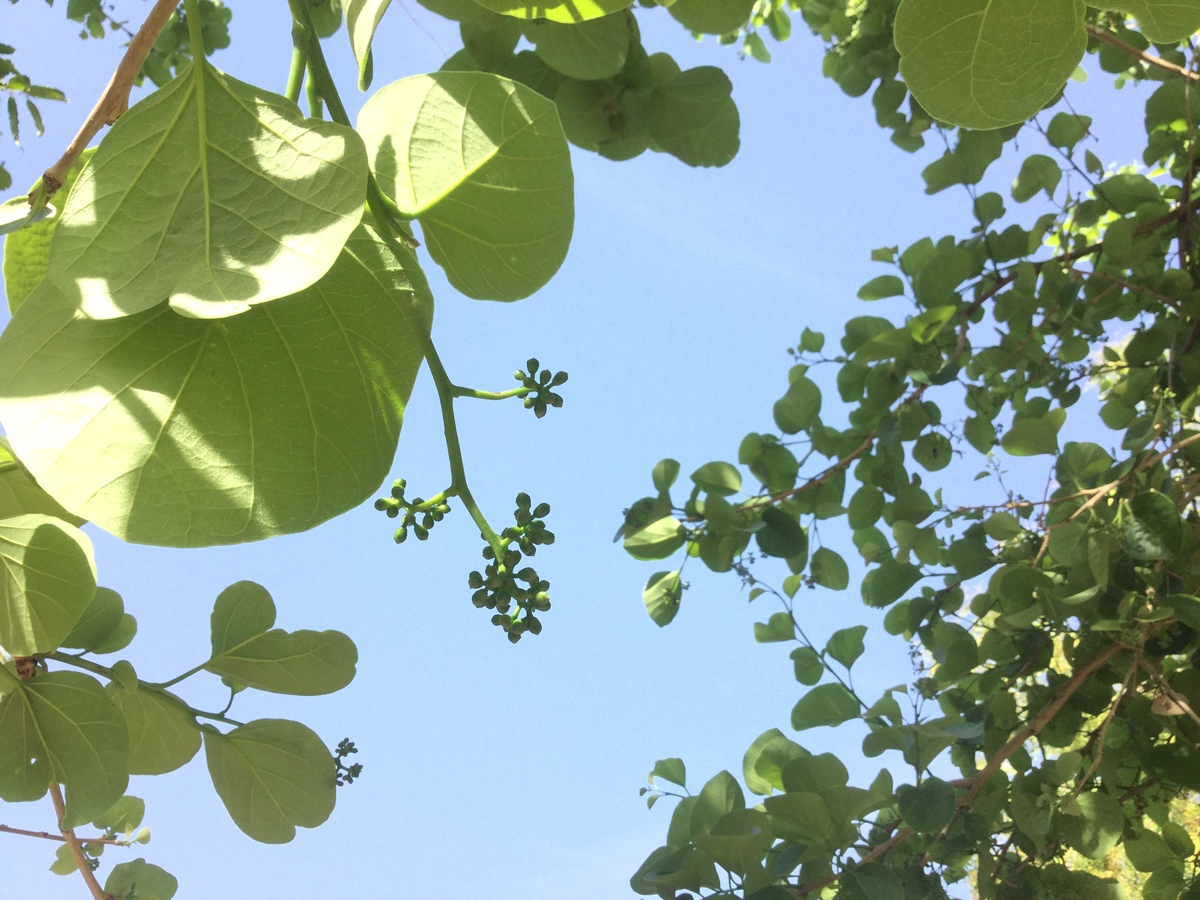 Thanks to spring group bhaktas, gundas are already developing

In the evening we shall gather some night jasmine (Nyctanthes arbor-tristis) leaves and make a decoction of these sweet scented vines to treat the sciatica condition of one of our ashram Mataji’s. The leaves have anti-inflammatory properties. We have hundreds and hundreds of plants here that we still are not utilizing for their potent medicinal worth – but one day….

And now about May: I am aware that Jadan Ashram is just about the hottest location on the planet during said month, but just think how joyful it would be to combine a summer break with Vishwaguruji with a trip to Badrinath, or one of the many cool and cultural hill stations in India, in the lap of the Himalayan foothills. And really – the summer does have its unique charms, not least special vegetable dishes such as sangria and also gunda combined with green mangoes – and of course homemade Indian caper (kair) pickle. Just saying…

We even have a special berry tree called piloo (Salvadora persica) and when you suck the mustard flavoured berries (one must then spit them out!) the body is cooled and protected against the hot westerly – called the loo. This tree is also the source of Meswak which is used in this country in many ayurvedic toothpaste products.

I hope to see you in May – just remember your sun protection and a nice broad brimmed white hat. Sometimes coming close to the flames can be surprisingly interesting – and one can always cool off in the talab.