We had a maximum temperature of 38.3 degrees celsius this month and it felt very very bright and hot. We have not had a drop of rain since late August last year – so six dry months are behind us and the heat of the summer is showing signs of approaching.

In spite of this, our green areas are shining with new blooms and weeds are again shooting up and gaining momentum, as the irrigation of our crops, vegetables and ornamental flowering plants intensifies. We devoured our second ever bunch of bananas this year, before the koels (cuckoos) found them and there is a third bunch starting. The papaya trees are laden with heavy fruit, which will remain dormant until the mercury hits the high 30s. Sunflowers have risen up in the Shiv Bagh, only to be completely emptied of their tasty sweet seeds by joyful green parrots, who swoop down and sometimes snatch away the entire flower in order to easily devour their meal.

The last of the crunchy and juicy lettuce leaves were enjoyed before the Holi Festival holiday began on the 1st of March, when our workers happily disappear each year for about 10 days to visit their birth villages and play the colourful and symbolic games of the spring season. The other lettuce varieties have started going to seed, which leaves us with endive which is always the last variety to survive the heat; rather like mangold (chard), which always surpasses our local variety of spinach that transformed itself into long flower-laden bushes by the end of this month; as did the coriander.

All of our ploughing and preparation of new summer beds was done this month and we found a few kilos of sweet potato in our monsoon kheti which was finally ploughed up this month. The east side was prepared for some summer cucumbers, as it has now been resting since July 2014 and the soil will surely be very fertile.

Chetan... checking field for pests, in action measuring the field for next season, and sometimes helping to fertilise the kheti with natural urea

During the last 10 days of the month I planted many varieties of deshi seeds, such as red amaranth, okra, cluster bean, saved seeds of bottle gourd and snap melon, and some European varieties of watermelon, zucchini and cucumber. We continue to harvest our winter carrots and plan to have some karma yogi action there over Holi and in fact on every Sunday of March, until we have consumed them all either as a salad snack, or as a steamed or 'masala-ed' vegetable, or even as juice; and if still we have some left over, then the remainders can be sliced, sundried and marketed as carrot chips!

Many many thousands of leaves from hundreds of our native trees fell this month and this spring phenomenon usually continues each year until April, so there will be a lot of work in March to clear our irrigation channels so that the flow of water does not get blocked during flood irrigation. 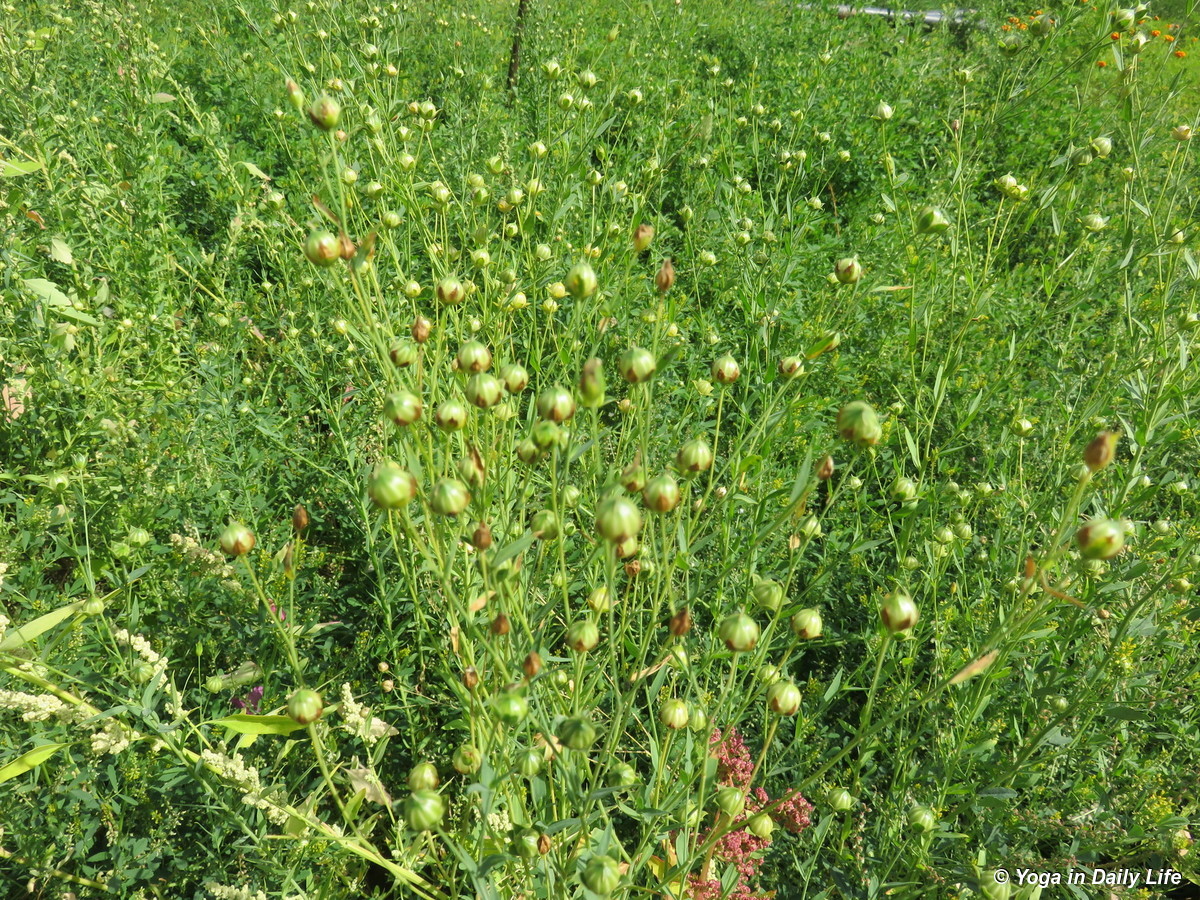 The harvest of barley and wheat should start during the first week of next month, and we shall be cutting our methi and linseed after the Holi break and storing the dried stalks – we usually winnow the seeds during the hot summer afternoons from mid-April.

The weeds in the Shiv Bagh are starting to get bushy again due to the increase in running time of the water sprinklers, but the soil in many areas has become super fertile, as mulch breaks down creating humus and a perfect breeding ground for thousands of earthworms. 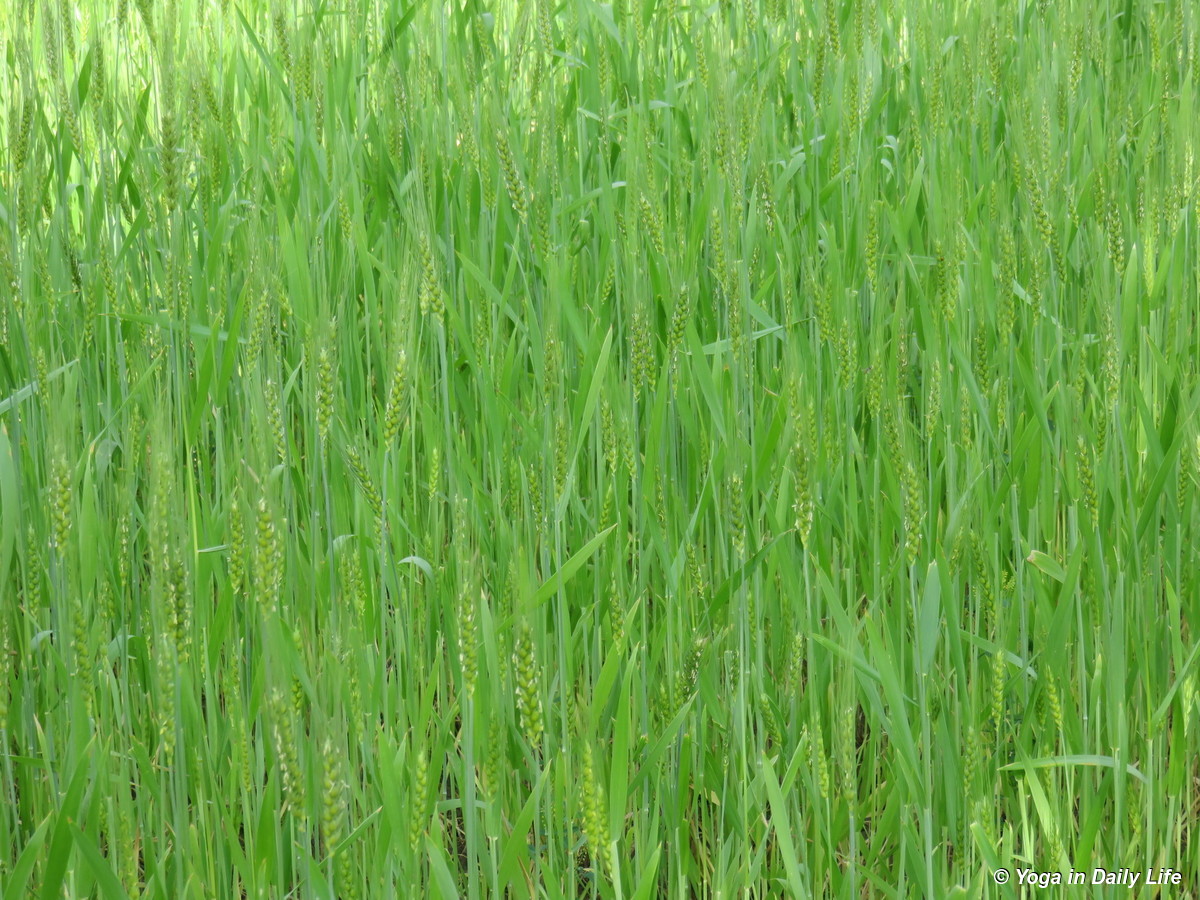 Wheat for 2018 chapattis and daliya

Maha Shivaratri this year took place on the evening and night of Tuesday the 13th February, and it is said that after this the snakes begin to awaken and sure enough some have been sighted since then – a rat snake and a Boa – both of which are fortunately not poisonous. It is therefore important not to have piles of prunings and dead leaves lying around for too long during these months – in fact, snake season is from mid February to the end of October each year, so raking and sweeping around our garden boundaries and beds and path and residential buildings is of utmost importance.

The last winter items to be harvested are our spring onions of which we have now consumed half, and our garlic which this year may be a decent size if the height of the leaves are anything to judge by. We usually dig these pungent bulbs out together on the first Sunday of April. Tomato season should begin after the Holi break and we have been enjoying cherry tomatoes since the beginning of the month. If all goes according to plan then when the tomatoes finish, around April 20th, then the summer cucumbers start. 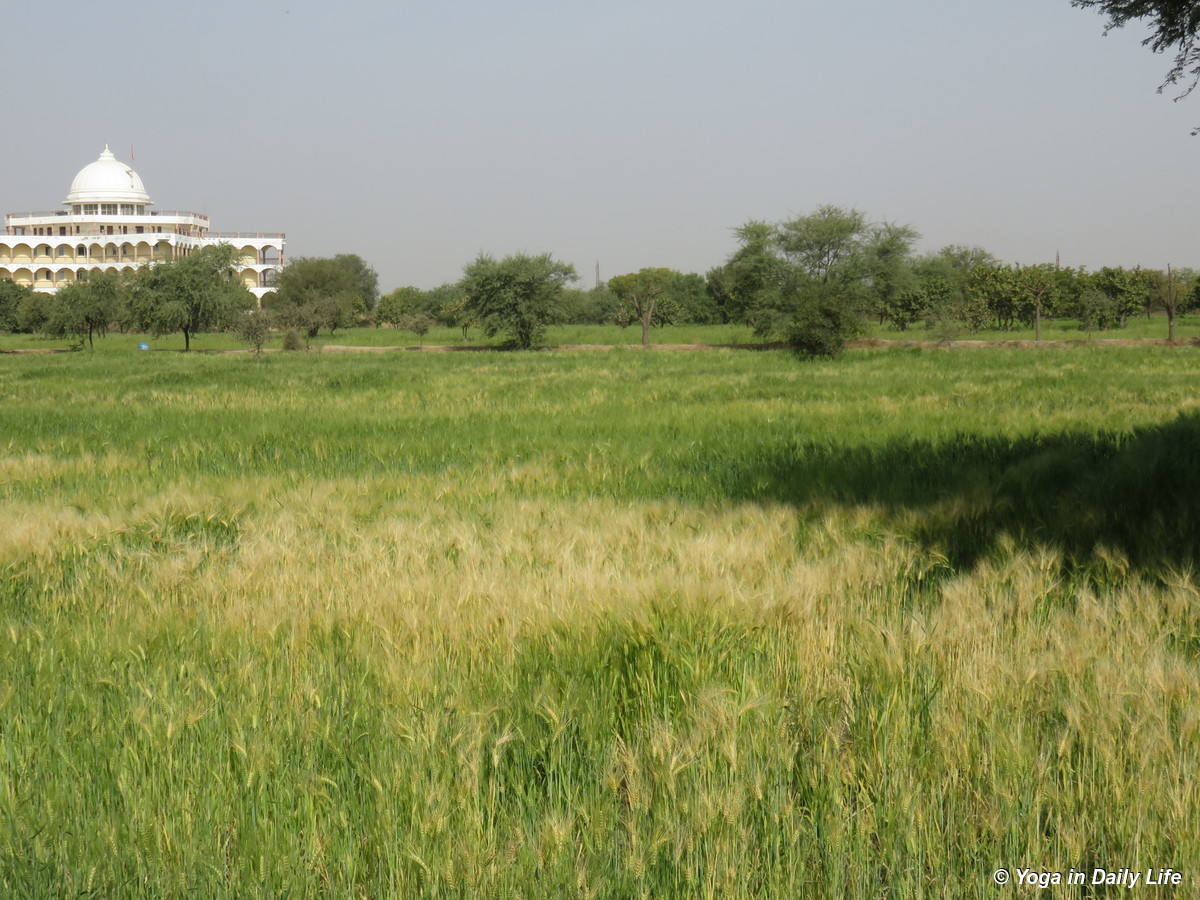 Wheat ripening in field between Bhakti Sagar and hospital

On the 27th we received a visit from the local government research farm team near Pali, and this time the team of agronomists and horticulturalists brought with them a professor from Brisbane, Australia, who has researched invasive species of weeds at UQ (University of Queensland) for several years and particularly one species known locally as gajar ghas (carrot grass or Partheneum hysterophorus). This noxious weed came to India with some wheat sent from the U.S. in the 1950s during a time of famine and has spread throughout the subcontinent during the last 7 decades. It is toxic to grazing animals and inhibits the growth of native grasses and crops, and also causes asthma and contact dermatitis in humans and animals. In Australia, if this plant is found on private property it is illegal not to report it and it must be sprayed and removed.

For each country in the world there is a list of invasive plants and insects, as well as animals. In Australia one cannot even cross a state border without declaring possession of seeds and fruit due to the required control of fruit fly disease and other viruses that may cause damage to agriculture in that area. Therefore there is a huge amount of research going on with regard to the control of such weeds. On the other hand, one finds that – as with all plants – each and every one of them has some medicinal value! 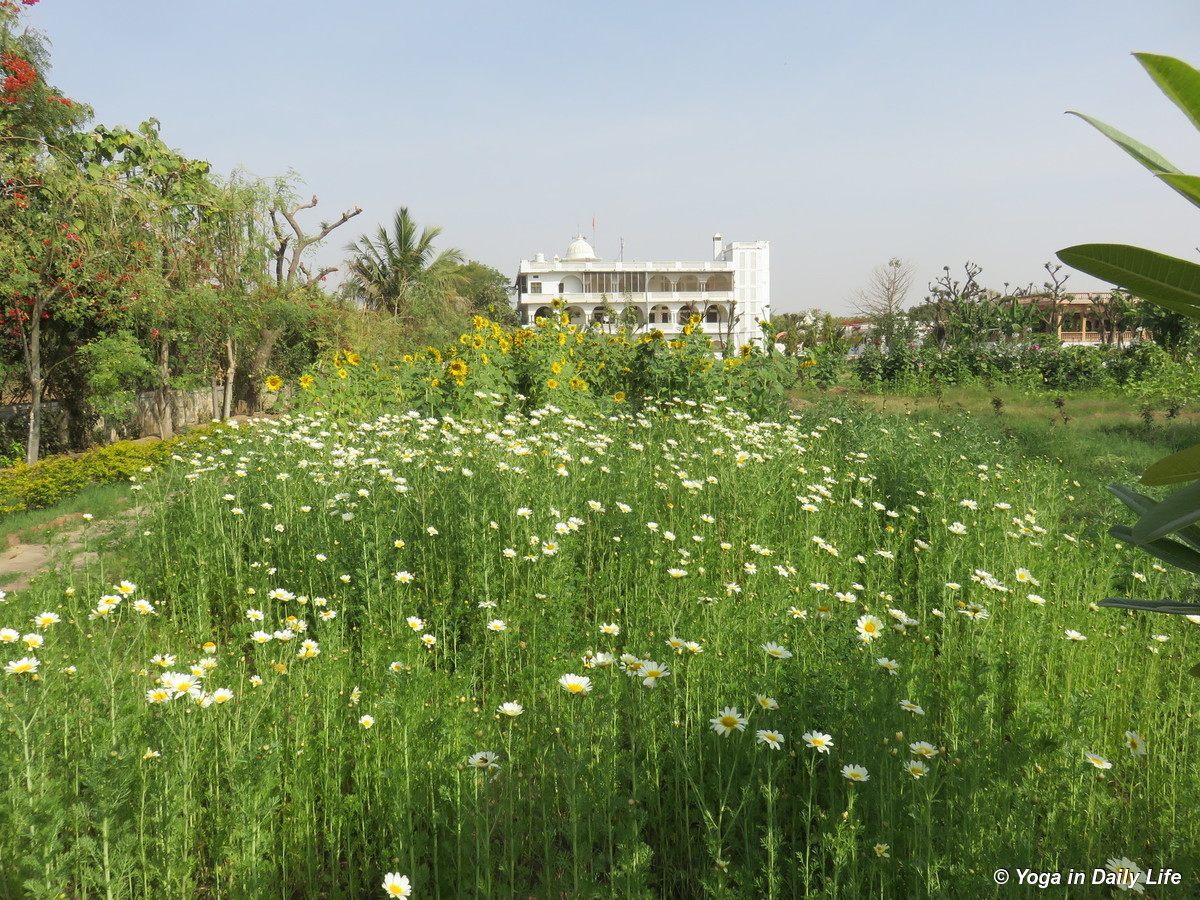 Magueritas and sunflowers on west border of Shiv Bagh

We are now on the cusp of the change of seasons and over the Holi break half of our karma yogi group will do shankprakshalan kriya and so they can enjoy some very nicely cooked carrots. We have enough!

Holi is harvest festival time throughout this region, when thousands of small land owners and farmers are cutting their crops, including jeera (cumin), wheat, oats, barley, fenugreek, linseed, mustard, peas, isabgol (psyllium/Plantago ovata), fennel and coriander. There are many folk songs of this region dedicated to the joy of having the divine blessings for a successful crop, which enables families to survive another challenging year. Grains and seeds are stored safely away after being cleaned, and certain leaves such as neem and tulsi are stored with them to protect against weevils and worms.

This month, a few kilos of deshi babool pods were also collected and then boiled, cleaned and sundried. During the summer months – as every year – more tree vegetables shall be collected. And so our rural lives continue month to month and year to year, with this dance – 'abun-dance'! Jadan Ashram has became an oasis of the semi-arid zone and we now produce some kind of food each month of the year, thanks to the expert planning and design of our Gurudev.

All the best from this green heaven