This month was the hottest October that we have experienced since 2002 – until the last few days of the month temperatures were between 38 and 41 degrees, so there was very little chance to sow early seeds.

From the 14th we began to prepare our winter plantations in the Big Garden.At the same time, the kar grass from the monsoon period was cut and tied into bundles and by the 31st it was nicely stored away in the horse stable area and will be used to feed the horses from December to March. We filled 8 big trolleys.

On the northern boundary of our root vegetable field (approx 440 square metres), some overhanging neem branches were pruned and so some more leaves were prepared for making powder. Later in the month, more trees in the big garden were cut and so we should produce a good amount of neem powder this season. The removal of the overhanging neem branches enabled us to add a 5th row to the vegetable plantation and – after cleaning out roots and stones – the seeds of beetroot, mangold and carrot were planted, along with sprouting potatoes on the 28th. Some black salsify and parsnips were also sown. Beets were sown on most of the boundaries of the beds. 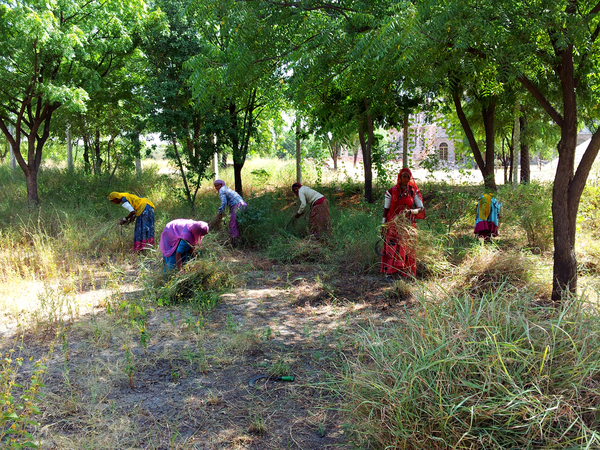 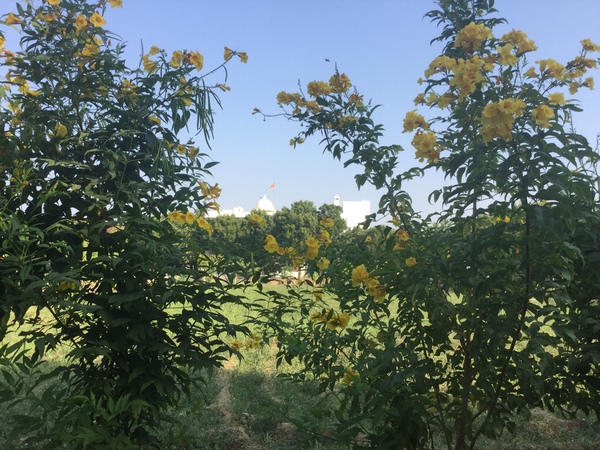 Two days prior to that, on the 26th, we sowed seeds in a slightly bigger area (550 square metres) just a couple of metres away, into simple beds, and here we planted our spinach and coriander for the winter, a little fenugreek and 6 big beds of flaxseed, some spelt wheat and other old varieties of wheat, 2 beds of pearl barley and 12 of alfalfa grass and 8 beds of oats. We found some really nice powdery and sweet smelling compost to fertilise the beds with during irrigation. Mooli was sown on all the boundaries (doras) of the beds. We also added another line to our fig plantation.

We have had another good harvest this month – another 100g of pumpkin and plenty of lauki, toru and okra, but by the end of the month most of the monsoon vegetables had finished and what remained was guar phali, baigan and bhindi, and roquette for salad. There was still pumpkin in the cool room and plenty of green papaya on the trees in the Shiv Bagh, some of which ripened this month.

For our winter salad and tomatoes, as well as spring onions and parsley, we re-ploughed our monsoon gourd field behind the central office extending it as far as the cool room, and sowed the seeds on the 29th. Our helper designed an excellent irrigation system which means that the whole area can be flooded in one hour. Our spring onion seedlings were ordered at the end of the month and these did not arrive until early November. Lal shalgam/turnip seeds were sown on all the doras.

Most of our winter seeds were provided by bhaktas last year and now our stock is finished, so I would again request bio/organic seeds of any of the following: 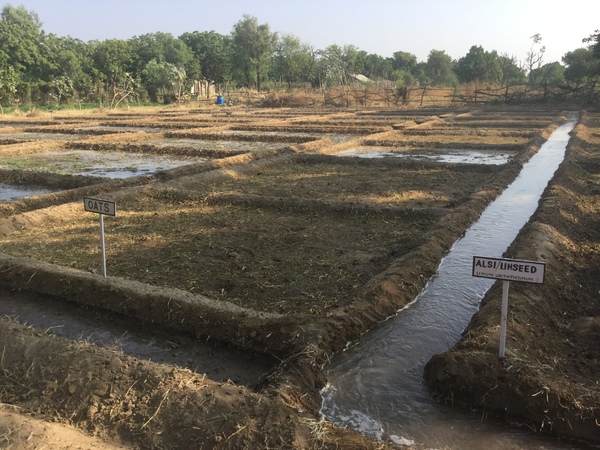 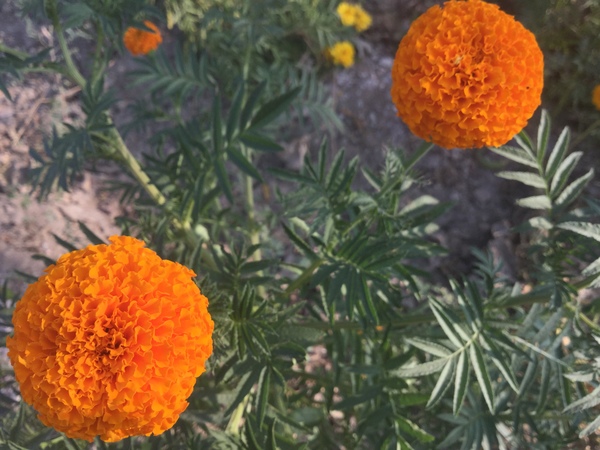 Early in the month, mustard was sown in the middle of the Shiv Bagh, but this did not germinate properly and due to two floodings and the addition of gobar, the nutsedge has really come up very vehemently! On the boundary of the north and west, beds were prepared, but to date nothing has been sown there – it would be an ideal place for garlic which we have not yet managed to fit into our 3 plantations. Two huge additional plantations of yellow mustard seed were prepared near Mataji’s Samadhi and near the Lakshmi tube well. An area was also made behind the White House.

We have neglected the Shiv Bagh this month due to all the preparation of plantations in the Big Garden, and also due to the harvesting and selling of produce. This will mean some intensive weeding in early November. However the rose bushes look good and have grown very well since they were pruned.

The lemons are still going and we picked 70kg this month; we managed to irrigate the trees twice this month and to fertilise the eastern most orchard with some beautiful composted soil/gobar that we found beneath a nearby neem tree that Surdas – our blind bull – spends some of his time under. It was about one foot deep – a treasure! 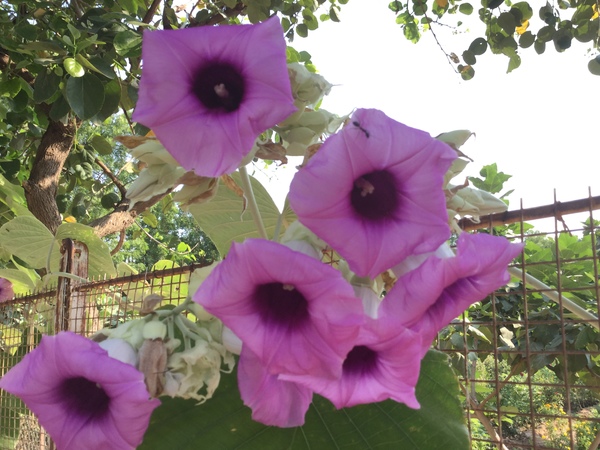 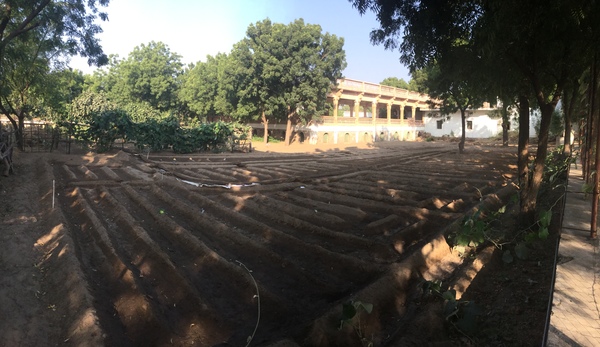 A lot of winter work is pending in this area – the annual pruning of the lemon trees, fertilizing the second orchard as well as the tamarind trees, and repairing of all the gamlas, construction of a new fence and repairing of old ones, and general cleaning up of boundaries, which needs to be done after every monsoon. Our workers made a start on the northern boundary of the vegetable field and nicely cleaned around the kumtiyas there which have started to develop seed pods that can be used to make new trees or harvested for a vegetable.

On the 29th we planted mogri (radish bean) along the fence behind the Shiv Bagh gate and the guard house and fertilized the 2 long channels with very powdery old gobar. The orange trees along the whole western boundary are doing well. The jicama plants started to flower this month and some basil is coming up in those beds too. Deshi varieties of bhindi and eggplant that were planted at the beginning of the month also came up well, as did some early planting of endive in the eastern part of the Shiv Bagh, so we shall have some salad for Vishwaguruji in November. 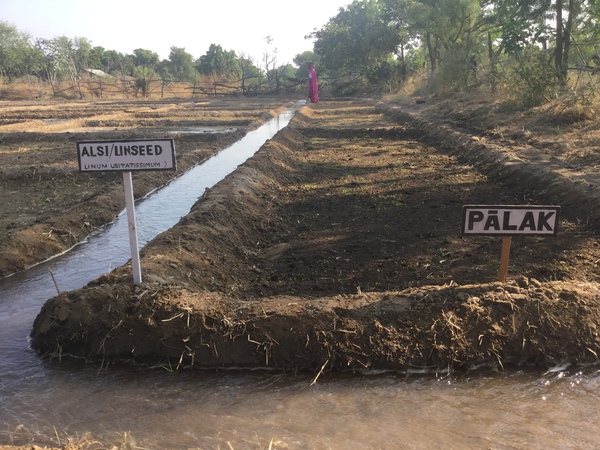 On the 30th, a second planting of roquette took place – in the tomato/papaya section of the workshop garden. Most of the monsoon tomatoes died, so that is a lot of space here.
In both the workshop and Shiv Bagh gardens marigolds are blooming and there are some really big and beautiful marigold flowers in the bhindi area in the big garden. Here along the fence the karela vine are doing well, though most of the gourds have worms inside. They usually take off around April.

Other than the garlic and some re-planting, and maybe peas, our winter planting was mostly completed by the end of the month. We look forward to fresh greens by the beginning of December and some less frequent irrigation as the weather cools. Lows of 14 degrees celsius at night were already registered by the 30th and day time temperatures were down to around 32 degrees. A huge relief!

See you all on Deewali!