Passing from Hemanta Ritu (season) to Shishira Ritu in Jadan Organic Gardens. Greetings from Ashram and many many good wishes for the coming year!

Lettuce and more crunchy lettuce has been the theme for this month – green and juicy and at its very peak. In February it will flat line and there will be a slow decline as the heat rises. As the days slowly began to get longer, and the mooli and pak choy season ended, the sweet little carrots were ready to pull up and some tiny (this year sadly) beetroots. There is a period of dormancy in our gardens during this month, but it is also a time when flowers start to bloom. So by the end of the month, the sunflowers had started to appear in the Shiv Bagh, as well as the Marguerite daisies (Argyranthemum frutescens – native to the Canary Islands), hollyhocks and a few varieties of marigolds.

The ashram became full of life again with the return of Swamiji on the 20th and a group from Spain and 4 brothers and sisters from Holguin in Cuba. Amongst these, one had some experience of growing organically and another haled from a Cuban family that run an organic farm in the Canary Islands, and yet another from Huesco in Aragon runs an organic cooperative. I had some really really good sharings and learnt a lot more about Cuba, which I would suggest everybody does because it is a jewel and the people are very warm-hearted and intelligent. 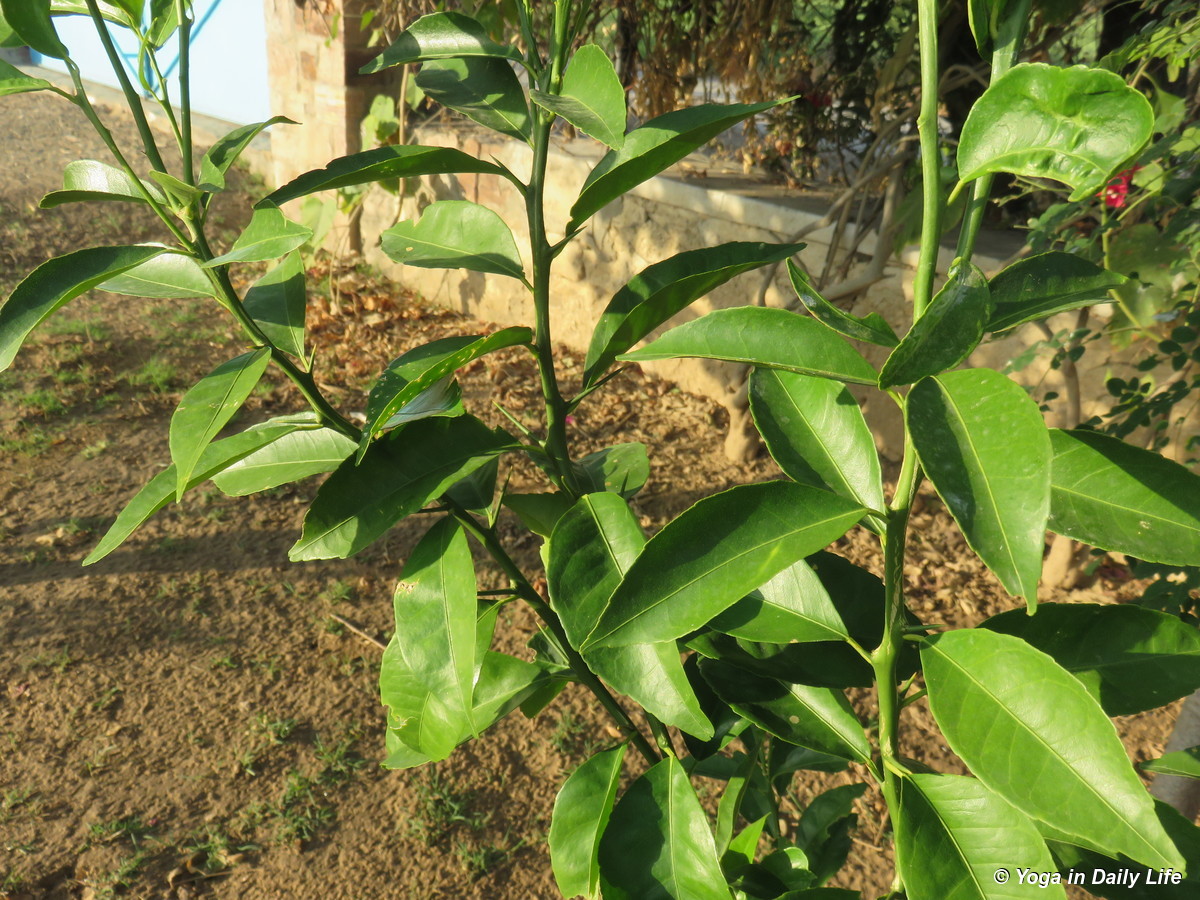 An orange tree in its 4th year.

The rest of the roses were pruned this month as were most of the lemon trees in the upper orchard – all of the trees have started to flower now and some even have tiny green fruits on them.

The tomato plants behind the cool room are also flowering and these shall start to fruit in March. During the next month we shall need to eat a lot of spring onions and carrots, and of course lettuce which I am packing up to send to our other ashrams whenever there is a chance, although nowadays Nipal and Khatu ashrams are producing their own salad varieties. 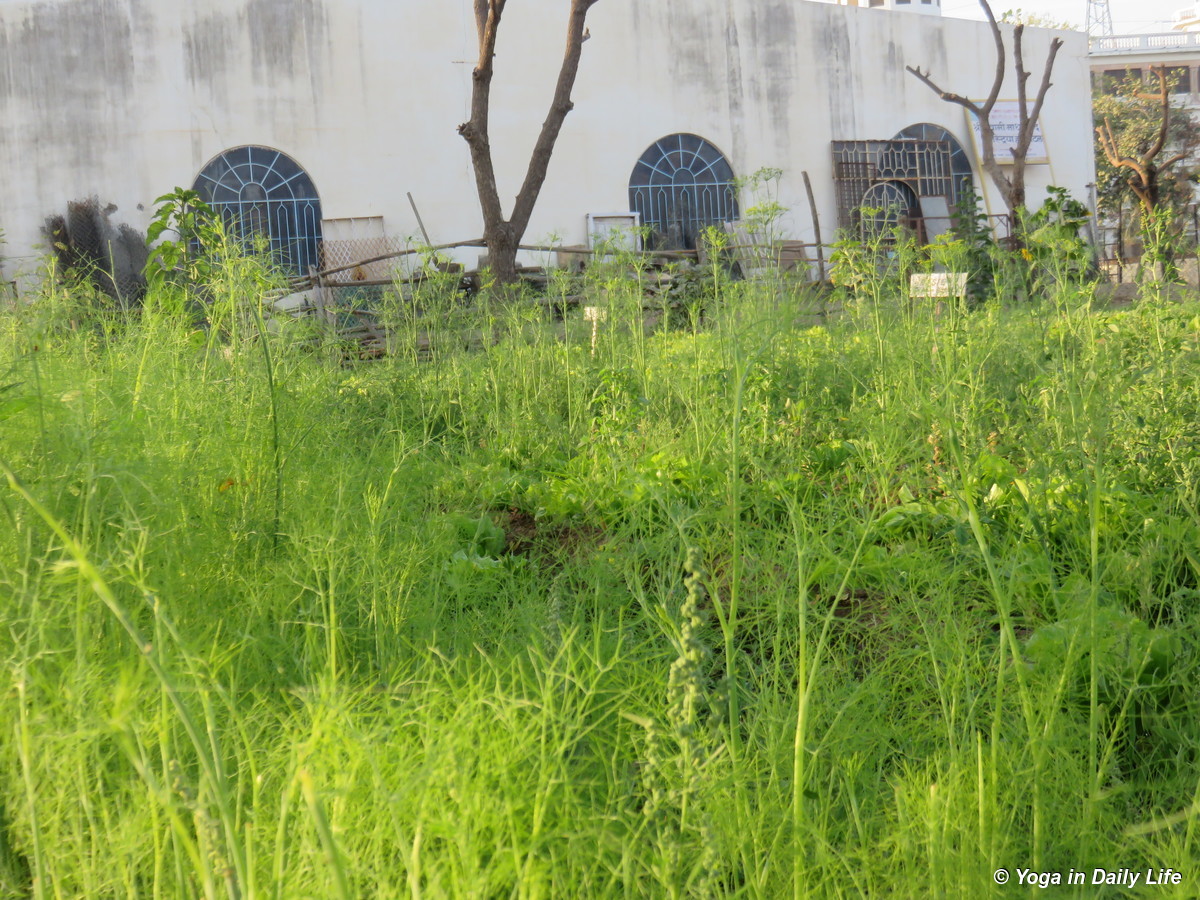 Fennel which we cut into the salad.

The shop was nicely busy this month and I thank all of the Catalonians and Cubans for their enthusiastic support – they brought something very unique with them to Jadan and that is the joyful and friendly and loving nature of the Spanish Soul, which can be found in any Spanish speaking area of the world. They also helped very much with pulling up carrots and cleaning onions and many other works in the ashram while they were here. I hope that they can come annually from this time forth… Most welcome! Thanks also to Dr Chitra and a small group from Slovenia who were visiting during late December and early January, and who gave the pathway in the Shiv Bagh a makeover, and weeded the whole salad area. Enthusiasm and positive energy go a very long way in the gardens.

From mid-January according to the Ayurvedic system of seasons (ritu), the winter changes to its second phase which is called shishira ritu which starts on Makar Sankranti (January 14) and continues until March 14, which this year is 2 weeks after the Holi Festival of India. This time frame covers the Indian calendar months of Magh and Phalgun. The Magh full moon was on the 31st this month and during the evening there was a lunar eclipse. 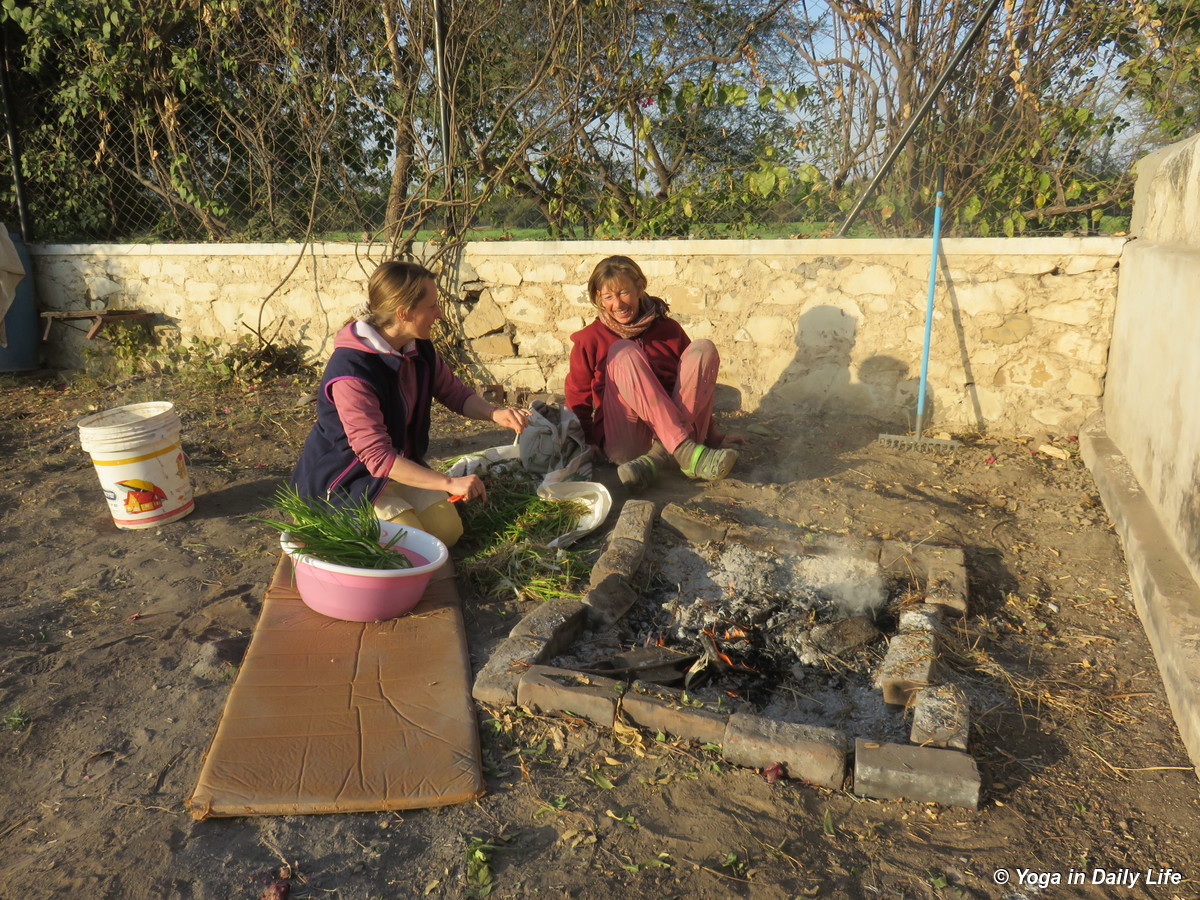 Cleaning the salad near the morning fire.

During the beginning of shishira, the cold weather intensifies and dryness becomes severe and so vata dosha can get very aggravated during this time. Warming and heavy foods are required during this season and cooling foods such as yoghurt and bananas should be avoided. Sesame or mustard oil should be applied daily to the body and one should take a sun bath daily. There is a dhoop (stick of resin that inundates the room with smoke) that is made from herbs like aguru (Aquilaria agollacha) and this is then inhaled and relieves the body from kapha.

The days have for the most part been flooded with sunshine this month and it is not cold at all after 10am unless one is working in offices or staying inside. No one is in any hurry for the weather to heat up, as it inevitably will start to do so after the 3rd week of February, and yet I experienced some longings for the yellowing vegetation of early March during this month – a time when most of the winter vegetables have been harvested and the seeds begin to ripen and to dry on the crops, and yellow leaves drop from the neem trees and lay in carpets everywhere. I think that spring time is probably the most beautiful of all the seasons in this part of Rajasthan. 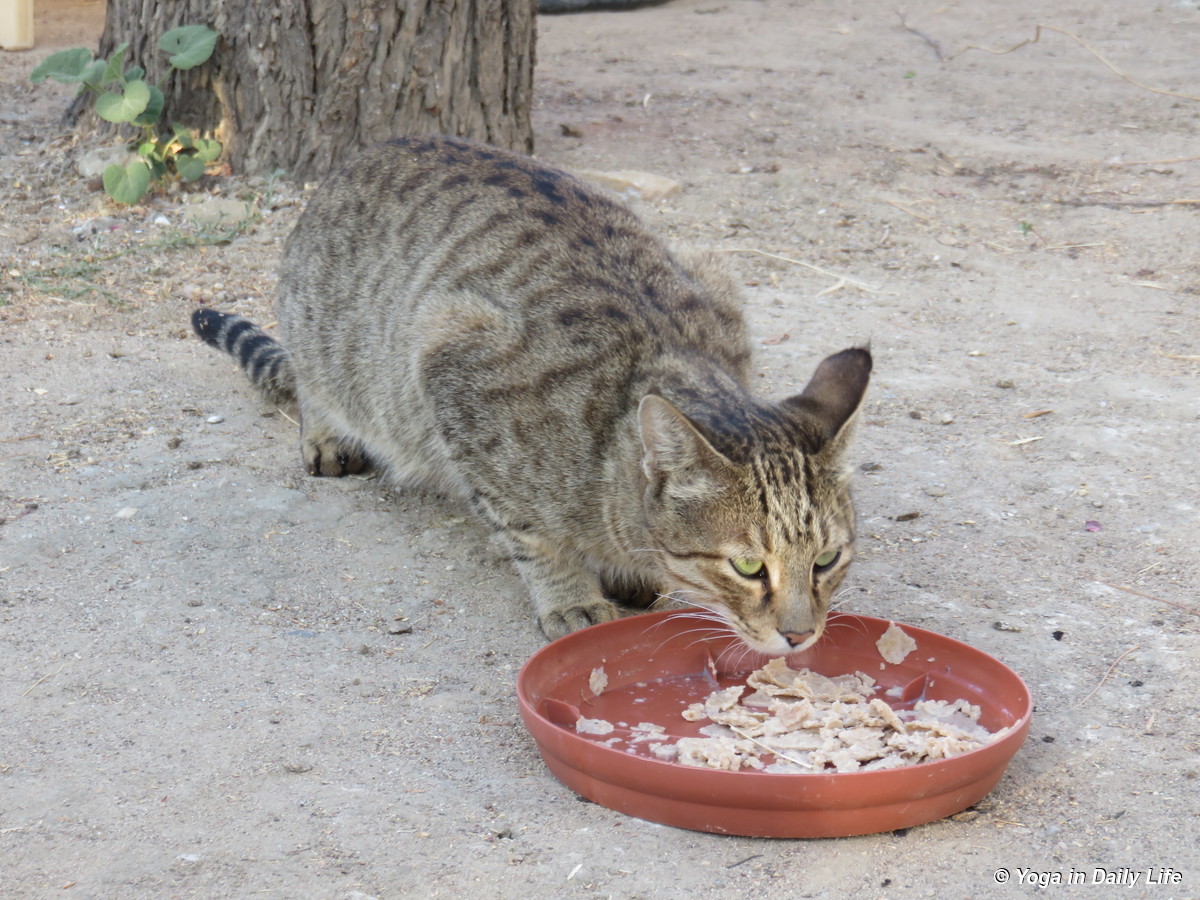 At present, we have a healthy number of karma yogis here and so easily consume around 8kg of salad produce daily. I sometimes dream of an eco resort nearby that would purchase our surplus produce from us at a premium price – perhaps we can start some kind of eco-Ayurvedic detox courses here and provide green juices and salads and courses in vegetarian dishes that are both cheap to make and healthy. Stiff joints and weak bones seem to be the norm these days, with people as young as 45. We could teach them Hatha Yoga kriyas and they could do a little garden work for nature therapy and fitness, and go for a daily walk around the ashram and up to the mountain. They could go boating on the talab too and do a little bird watching and identification, or check out our arboretum which has become both extensive and informative. 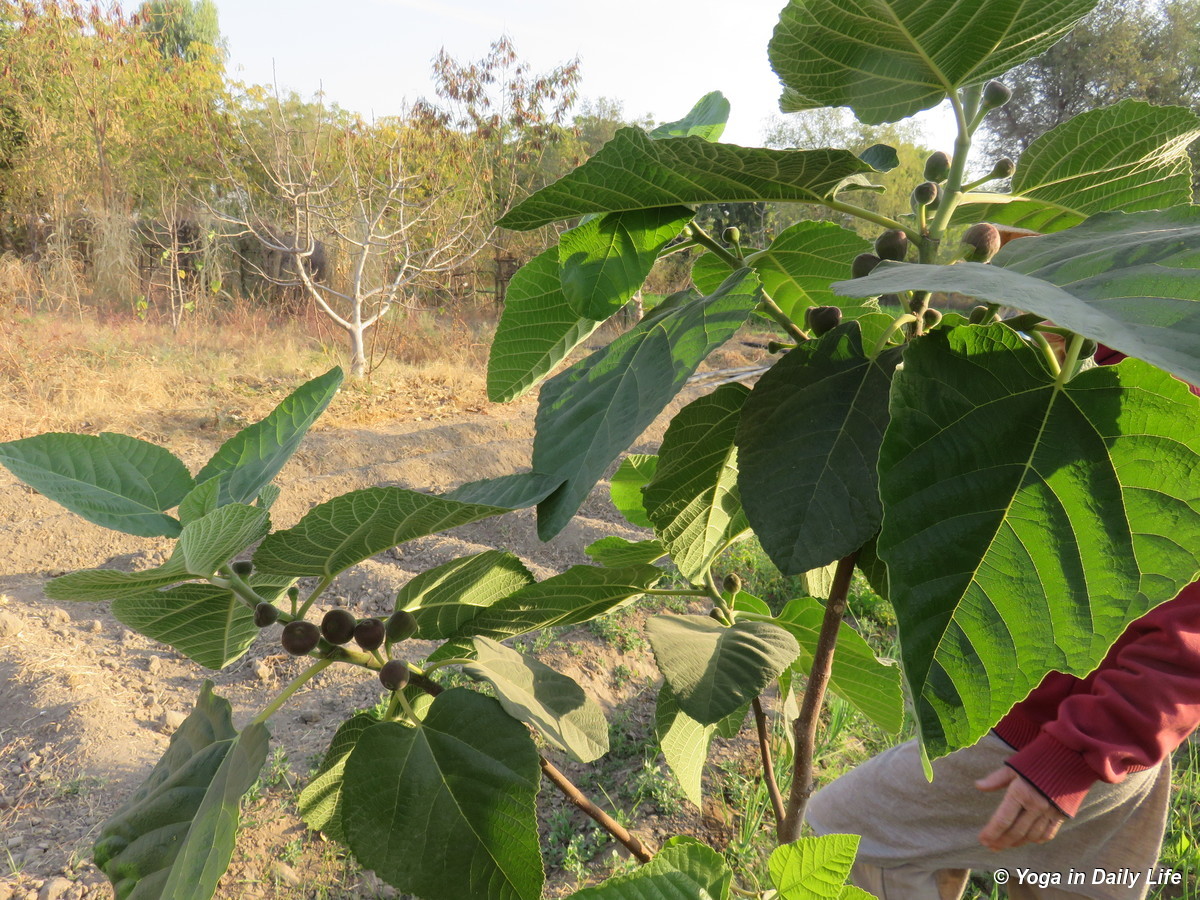 The last day of the month was the hottest, at 33.9 degrees Celsius, and on that morning the temperature was 10 degrees and we had many days this with a big difference in early morning and daytime temperatures. The lowest temperature for the month was 4.8 degrees. Sometimes this extreme of temperatures challenges our immune systems! 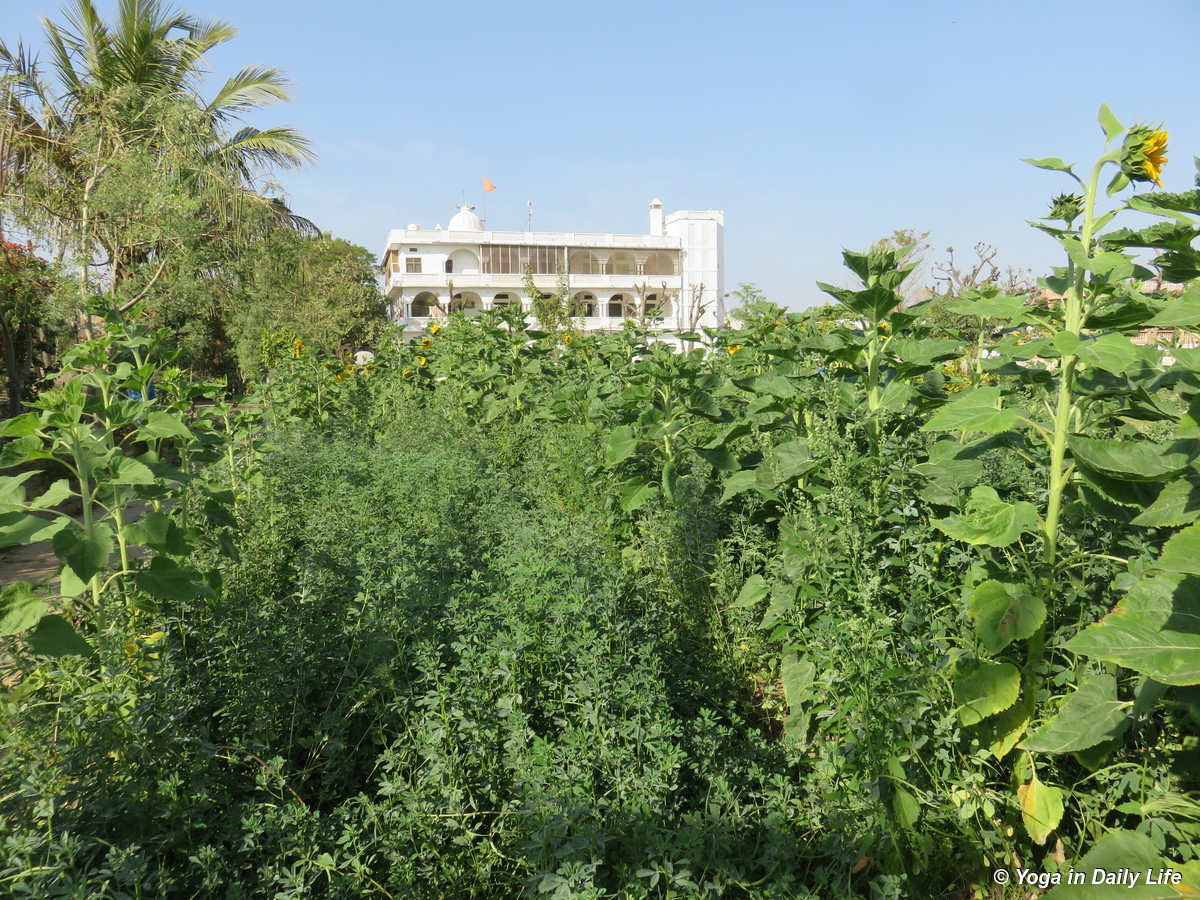 It is time already to decide where we should plant our summer vegetables and to prepare the soil. The mooli and mogri area was ploughed up on the 11th and we have been spreading some old cow dung there and plan to have some bhindi in the area with red chandaliya on the borders of the beds.

Good for another 2 months.

The monsoon veggie area in the Big Garden finally stopped producing gourds this month and so the horses will graze there for a couple of days. Then we shall plough the area and prepare part of it for summer salad gourds and see if there are any sweet potatoes beneath the vines that came up during the monsoon months. The boundaries need to be wired closed so that our naughty mares do not wander into the carrot and lucerne plantations. They graze daily in the Big Garden because the whole of the wheat and barley area is too big to be fenced off and so they need to be in an enclosed area each day. 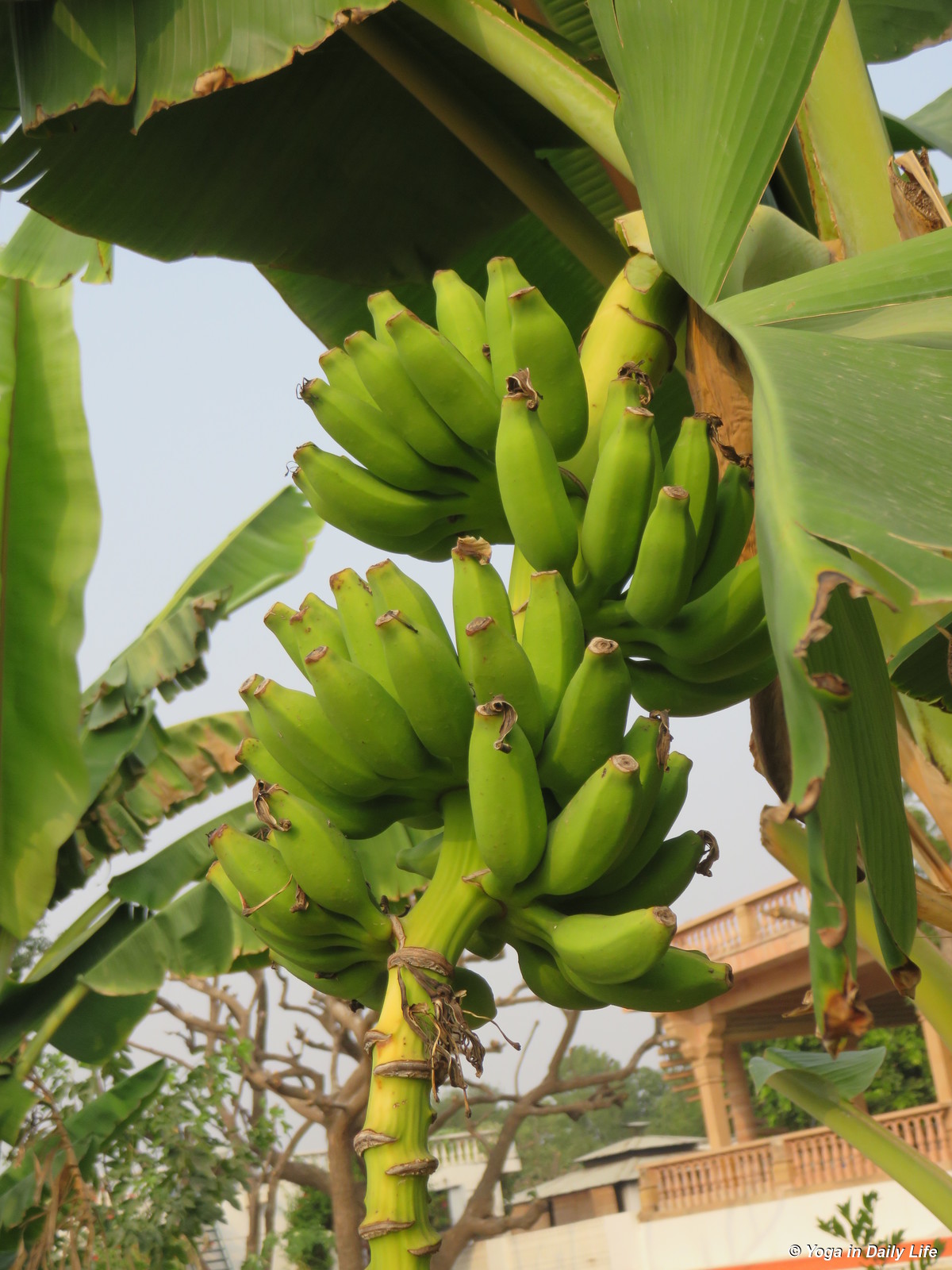 One day the bananas will ripen.

The metereological bureau promises that the temperatures in February will not rise above 30 degrees, so let us see. It is still a very good time to visit us since we have salad still for 2 months and carrots and spring onions and it is very beautiful as it is the blooming season, and one can feel an awakening of nature all around.

All the Best
From Jadan Ashram