﻿UPDATE FOR JADAN GARDENS FOR AUTUMN/WINTER PERIOD OF NOVEMBER 2015

and our European guests and Vishwaguruji were due on the same date. So from the 1st of November the race was on to complete our preparations and this meant some serious weeding and repairing in our Shiv Bagh ornamental garden, which became a stunning picture of different colours and hues of flowering shrubs and plants this month.

In the meantime, our winter vegetable plantations germinated, with the exception of the European wheat and barley varieties, and by the end of the month the area was emerald green and flourishing as you can see by the pics. Some of the salad lines and the parsley line needed replanting and we used some of the seeds brought by our guests to fill in the blanks, including cauliflower and fennel. Our second batch of spring onions did not arrive until the 29th and the first 3 beds were planted with 15kg of seedlings at the beginning of the month – so this month 35kg seedlings of condi (green onion) went into our salad area.

After Deewali there was some digging and repairing to be done on beds opposite the workshop, as over the holiday the monsoon guar phali was removed. By mid November we stopped harvesting the bhindi and guar phali in our monsoon plantation, but continued to irrigate the karela which will produce gourds over the summer months.

During the last week of the month our efforts were concentrated on weeding the carrot/potato/mangold/beetroot plantation, and also the makeover of 7 failed beds in the neighbouring field, and these will be replanted with garlic at the beginning of December. The mooli came up 100% on all the doras, or boundaries, of the fodder beds and we should be harvesting them by the first week of December. The first cut of this year's lucerne grass should be in early December. All that remains to be planted this season are peas!

During the visit of the group this month we were able to provide a few sabjis such as green papaya and the last of our monsoon pumpkin, as well as some bhindi and roquette supplied daily for salad. Half of the tarramira/roquette area was cleared this month, as it is not in good condition, and the area was prepared for some calendulas which are now being raised from seed nearby. A team of group members were very motivated and pruned along the fenceline from the Bhakti Sagar to the Swastika building, and filled 4 big trolleys with branches – thank you so much for your enthusiasm and promise of bio/organic seeds.

The salad mix started in the last week of the month and this is a combination of baby spinach, fenugreek leaves, alfalfa leaves, moringa and curry leaves, roquette and endive and pak choy leaves, and some edible flowers such as Indian rose, marigold and moringa and rosella. We also add mint and basil and tulsi leaves and some dill. It is colourful and highly nutritious. One can make a wonderful dressing from sesame oil, jamun vinegar and a squeeze of lime juice, rock salt and freshly ground black pepper and a little crushed garlic, some honey and some fresh mint and dill, whizzed up in a blender. Adding oil to salad leaves helps them to be digested properly.

200kg of lemons were harvested this month and the trees were irrigated twice. Since August we have harvested nearly half a ton, and over the winter months the plants will be fertilised and lightly pruned and new gamlas will be dug around them and the tiny roots at the surface of the soil removed. So we have plenty of lemons stored in our cool room for winter tea of ginger and lemon and our proactive kitchen team is always ready to make a fresh batch of spicey sweet lemon chutney. 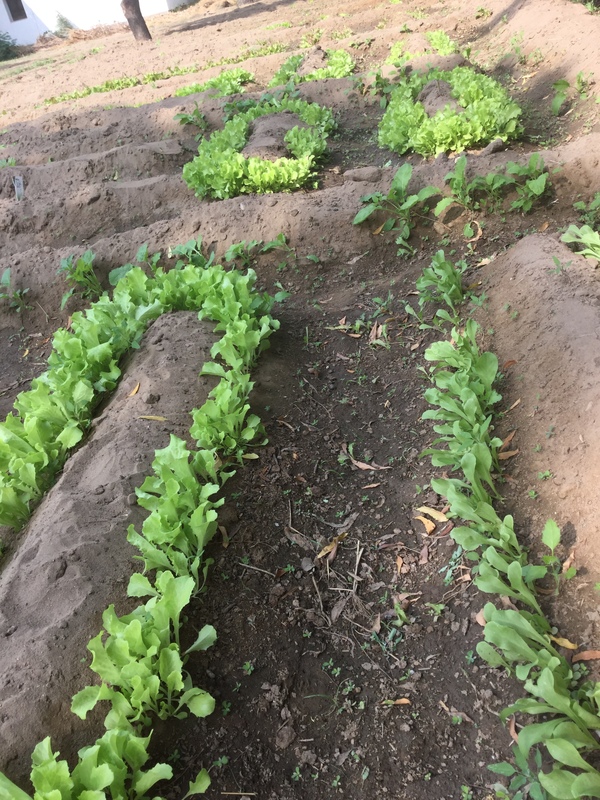 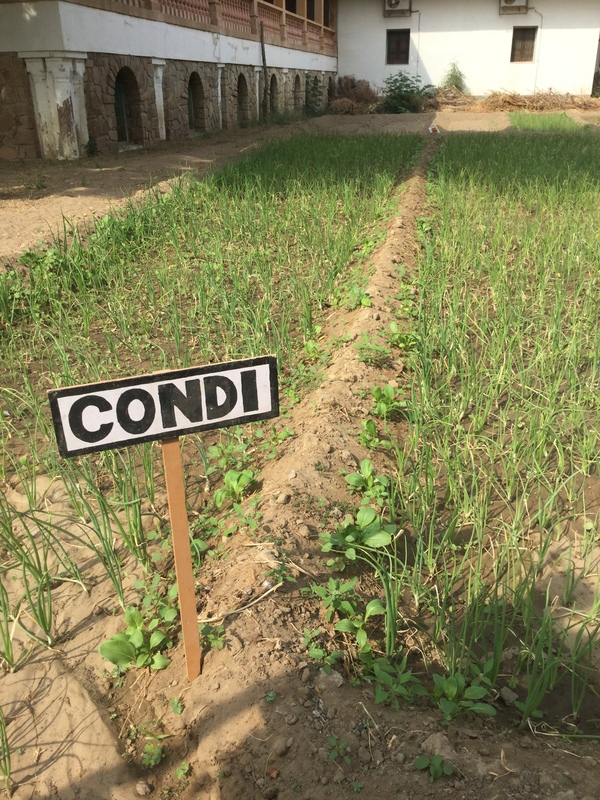 Some new items were produced from the gardens for the organic store this month and these you can see in December when you come. They included some freshly made neem powder. As the month drew to an end, the temperature dropped and now the fire flames are the dear friend during the chilly mornings. This month the temperature did not rise above 36 degrees celsius and the lowest temp was 26 degrees on the 28th, so it is with a great relief that I can say that the heat is behind us now for a few blessed weeks, and now the leafy greens have a chance to rise up and help our iron levels to improve!

We look forward to your being here with us over the winter and there will be a lot of fresh salad items and delicious and crunchy baby salad root vegetables; and there is a lot of fence making and digging and clearing up of boundaries to be done still in the Big Garden so please come and spend a warmer winter with us and bring some decorations if you like for our Christmas tree. The season is upon us.