As I began writing this report on a late afternoon on the 25th of July, the rain was falling torrentially after 2 rainy weeks and the talab had filled up by half a metre to date. In a village less than 70km from here – Dhola – in the Pali district – the inhabitants were being airlifted from their homes. It would appear that we have a situation similar to that of 2011 – flood crises.

Gujarat has been badly affected and many parts of north-east India have been underwater since June, due to unseasonally heavy rains.Today Sri Devpuriji's Mahasamadhi Remembrance is taking place in Kailash Ashram and perhaps it is a good time to pray for conditions to abate.

In the meantime, in spite of 10 dry days between the 3rd and the 12th, the vegetables for this season have grown very quickly because of daily showers – nothing too heavy or for too long – and this is the gardener's dream. It also means that we could not get to the weeds for very long this month and so have fallen behind at the plantation behind the office and at some of the sabji lines in the Shiv Bagh. We managed to weed the Big Garden monsoon seedlings however, just in time, and this is great because if the grass gets too high over the seedlings then the young plants get sun-starved and grow thin and spindly.

Some of our new European bean varieties, planted on the south border of the old lawn area in the Shiv Bagh, went from long and spindly to jagged stumps, thanks to the jaws of our Indian star tortoise known to us as Kasyap – as beans and legumes of all varieties are his favourite food. So bad was the damage that I needed to 'read him the Riot Act' a few days ago and transferred him to the Madhuvaani garden, where he now gorges on wild cucumber leaves. 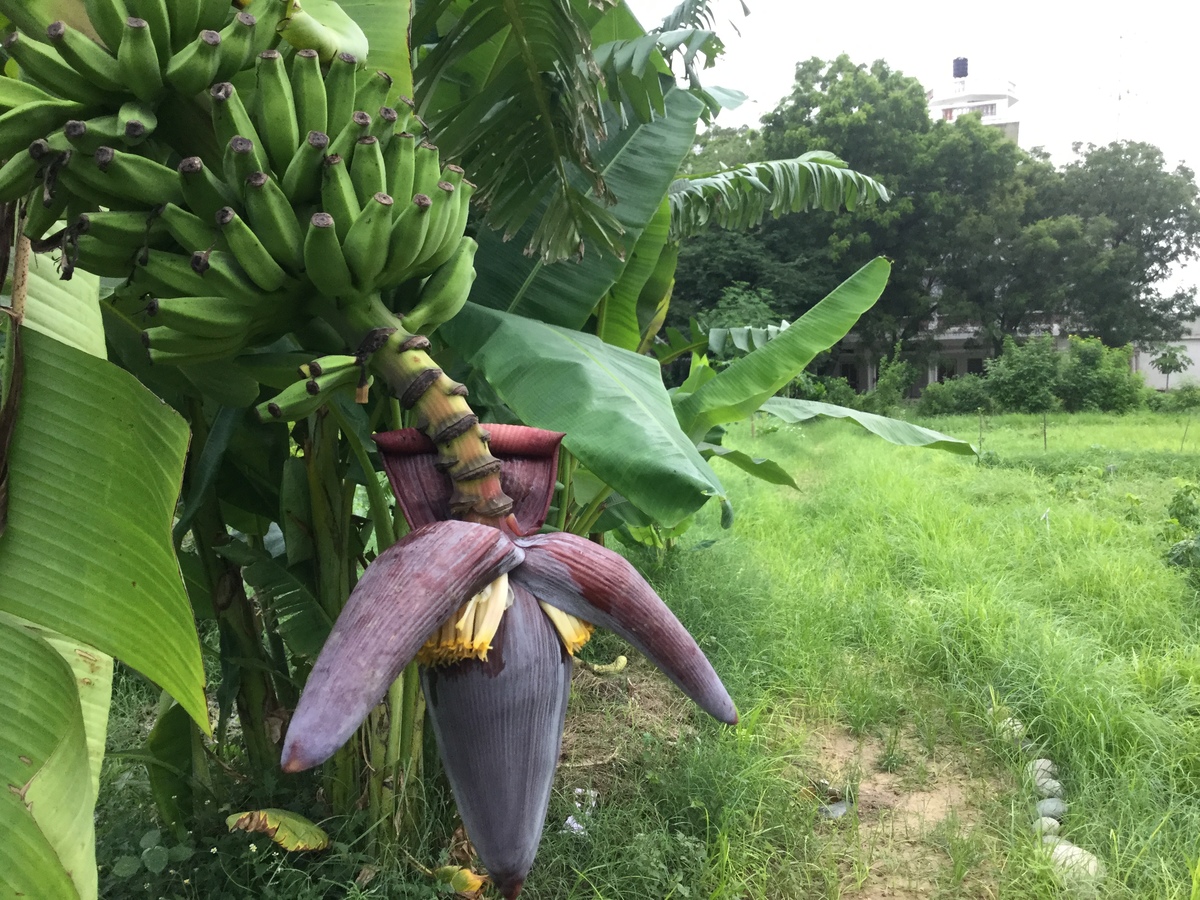 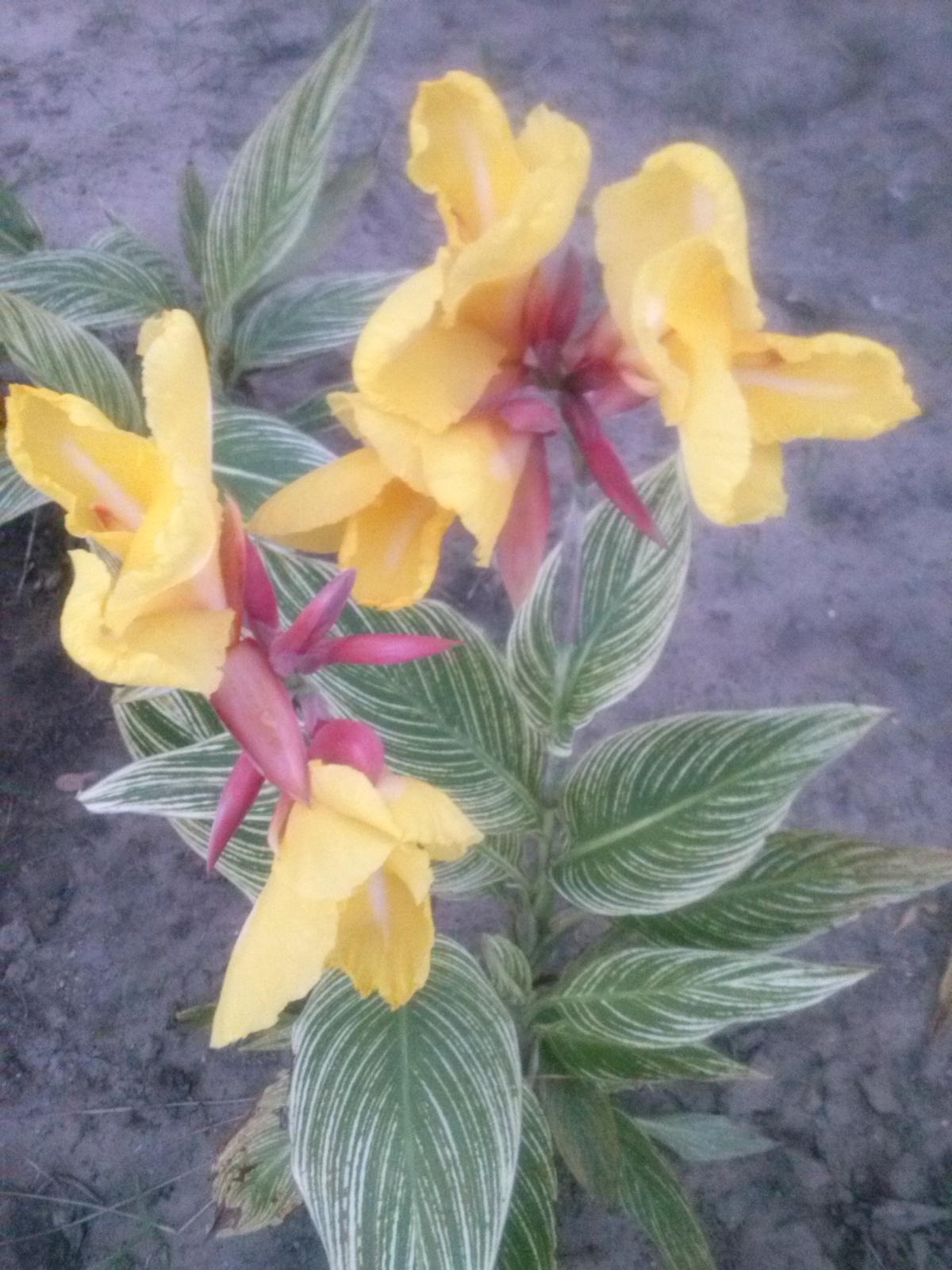 Jadan is in a rain shadow, so I do not expect that we will get floods, even though the streets of Pali just 20km down the highway could potentially be flowing with canalization detritus. However our Organic Store is showing signs of flooding – damp walls and some puddles – so it will have to be evacuated as last year. Our garden ladies spent these rainy days cleaning wheat and – when the rain wasn't falling – weeding around the Shiv Mandir and near the Bhakti Sagar. The road dividers running all the way to the Hanumanji gate were re-weeded and we transplanted a yellow flowered variety of canna lilly (Canna flaccida) there – 99 plants in all – which should hopefully start to bloom over the next month, encouraged by the tropical climate that has also persuaded a second banana tree to bloom and fruit.

The monsoon has already been going on consistently for the past month and there may still be 3 more weeks of rainfall. During Swamiji’s visit with around 35 guests, the focus was on digging out nut sedge from the Shiv Bagh, and then digging out nut sedge from the grass circle outside the Bhakti Sagar. Every spare spade (we have two!) and shovel and hand tool – some resurrected from the last century – were employed in this task and stronger boys chainsawed deceased trees and troublesome overhanging branches.

It really is a good season for pruning and pulling out weeds from the roots, before they get too big or start to drop their seeds down. The drawback is that until the rain becomes serious the humidity is appalling and it feels much hotter than the mid-30s. Once the monsoon really starts though, it is around 30 degrees and much cooler. It's not easy to find a comfort zone with the climate here between April and November.

By the afternoon of the 29th of the month the talab was full, due to nearly 24 hours of constant rain – which was briefly torrential. The Meteorological (weather) Department had already cancelled all schools for 3 days in Gujarat and Rajasthan the day before and flooding continued in the south-west of the state – namely in Jalore and Sihori. The largest dam in Western Rajasthan (Jawai Bandh) had all 13 of its gates opened yesterday in order to prevent a major catastrophe, and the road to Pali is temporarily impassable. 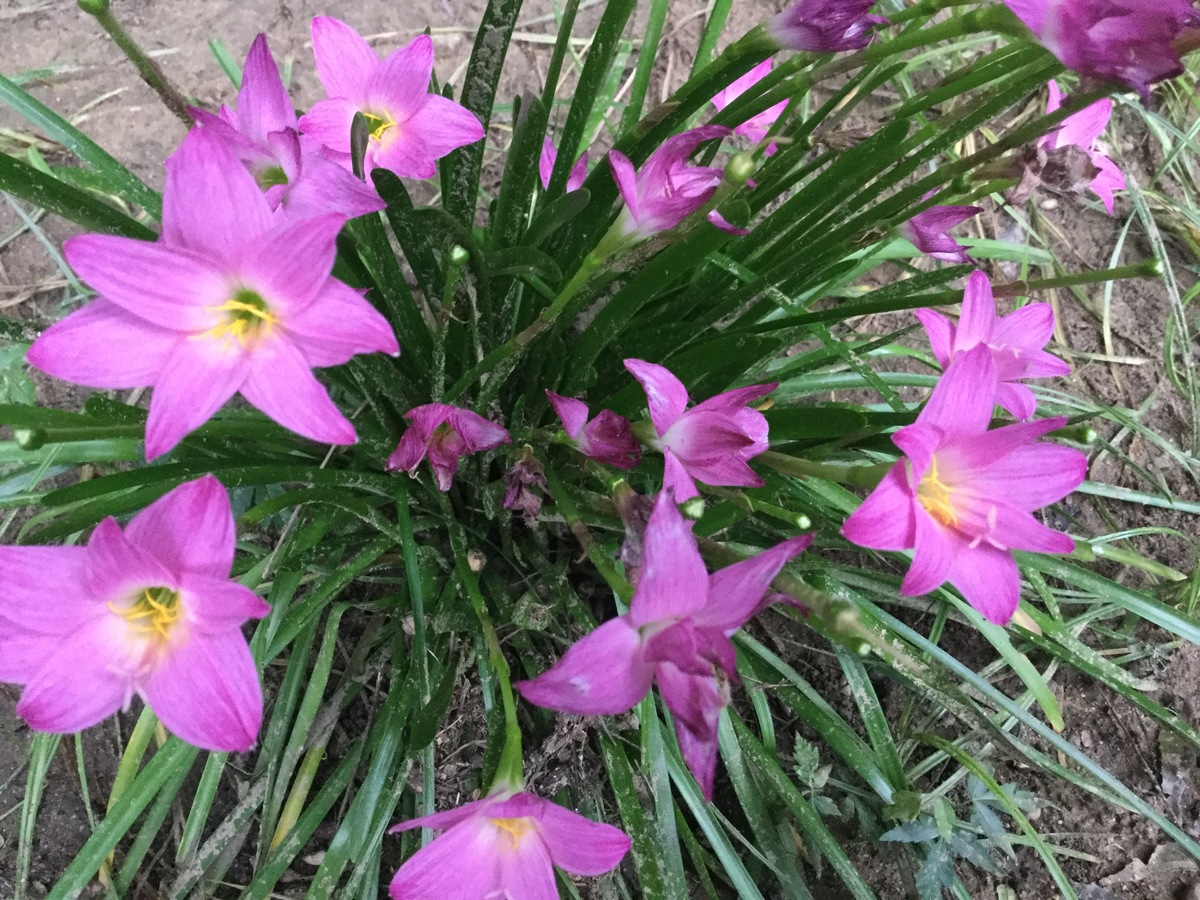 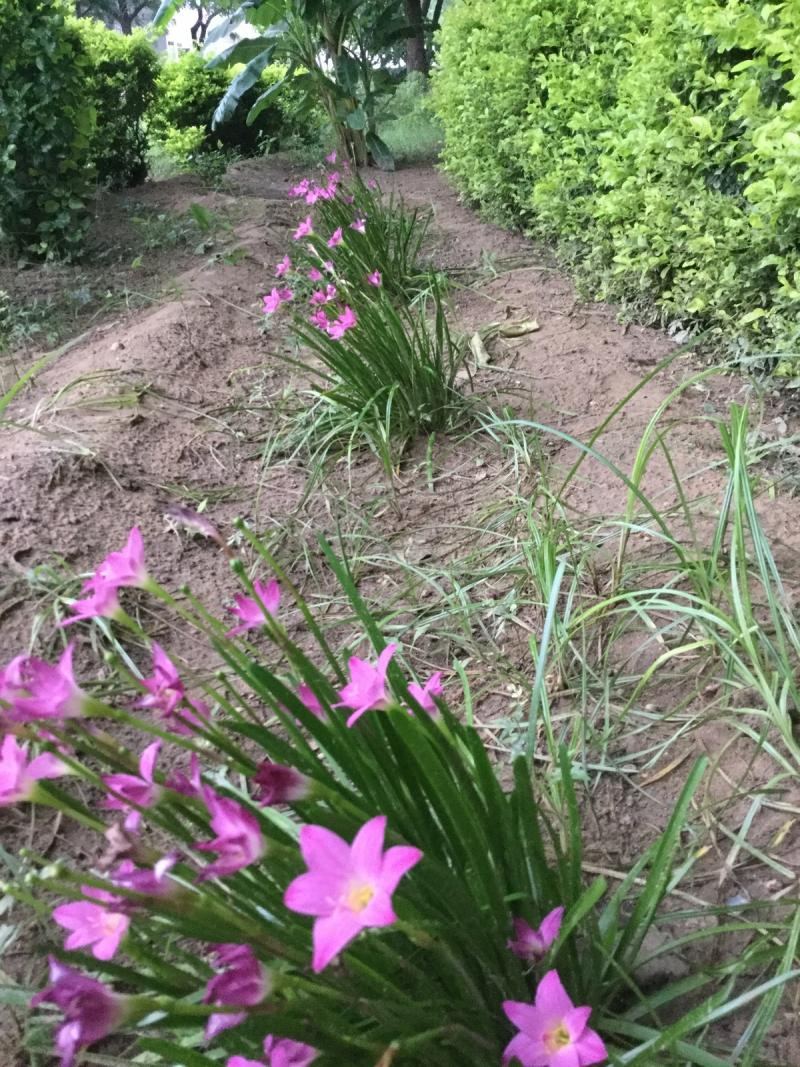 So after 18 days of rain and a daily 95% humidity, our talab (reservoir) is full and our ashram has once again become a lake. By this evening, most of the stock in the organic store will have been shifted up, high and dry, because on the morning of the 29th rainwater started to seep in through the walls – in fact most of our basement areas flood during this time of the year. For the last few days of the month we had not even checked our veggies, as the grasses had become so high and were saturated. All workers were cancelled for the last 3 days of the month. And today on the 30th the sun has come out!

In other parts of the state – including the Pali district itself – airforce helicopters are still rescuing stranded home owners, some of whom are carrying sacks of wheat so that they have some grain to feed their families for the next season. Crops and livestock have been washed away on a massive scale and there is not much, if any, joy of the rains for thousands – what should be a celebrated event has become a horror for many families.

The long rainfall of the 29th, which brought the talab level up from 6.5 metres to more than 9 metres, also initiated a fall in temperature to 26 degrees celsius, which is the lowest daytime temperature experienced since January.

So let us send our thoughts and blessings to the flood victims of this great continent from Assam and West Bengal in the east to the western states of India, and let us be thankful for the material security, warmth and contentment that we have in this moment, which can be washed away at any time. The aftermath of such tragedies take months to clear up and in the meantime, some very serious health issues can crop up.

I wish you all the best from the humid and sub-tropical paradise that our ashram has become, with bananas and papayas ripening on the trees and grasses growing on the grass roof of the Bhakti Sagar. Wild mushrooms are appearing in many places and tree seeds that have fallen down from our mowra trees are now sprouting as they lie in shallow puddles. In short, an eco-system rarely seen before is unfolding before our very eyes – gifted from the protective blessing of our Divine Lineage.