On the 50th anniversary of Mahaprabhuji's Mahasamadhi, bhaktas from India and from all over the world came to Jadan ashram to remember and express their love to Bhagavan Shree Deep Narayan Mahaprabhuji. On this significant occasion for the history of our Siddhapeeth Parampara, Mahaprabuji's bhaktas came to be together in a beautiful atmosphere full of love and grace.

Mahaprabhuji withdrew from His body in the early morning (brahmamurta) on 5th of December 1963, (according to the lunar calendar). Mahaprabhuji's Samadhi can be visited near Khatu village, in the ashram where He was living and spreading His teachings for many decades.

The 50th anniversary of this occasion took place in the Mahasamadhi hall in OM Ashram in Jadan, in front of the samadhi of Mahaprabhuji's  disciple and spiritual succesor Holy Guruji, Sri Paramhans Swami Madhavanandaji. 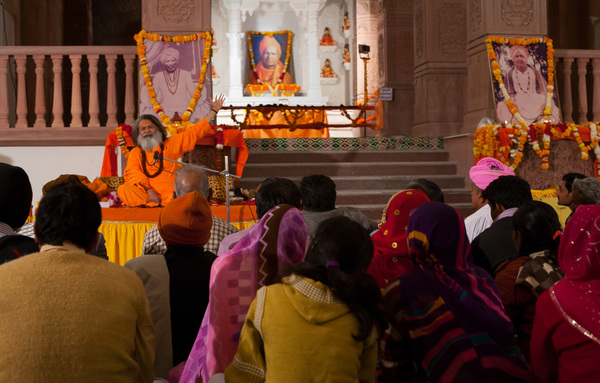 Paramhans Sri Swami Maheshwaranandaji, as Holy Guruji's primary disciple and successor of the whole spiritual lineage, interred the divine body of His master, a Saint, in the very centre of the unique OM ashram building; creating a heart and soul to this extraordinary place. For this reason, Yoga in Daily Life disciples, spiritual seekers and bhaktas of Sri Devpuriji, Sri Mahaprabhuji, Holy Guruji and Swamiji from around the world, now gravitate towards Om Ashram.

In the tradition of Mahaprabhuji teaching the eternal sanatan dharma through bhajans, satsangs and personal example, Swamiji Maheshwaranandaji organised this commemoration in the same way. Melodious bhajans, inspiring satsangs and Swamiji's shining example as a devoted disciple, giving all for his Gurudev made for a truly divine evening..

The program continued for more than 24 hours with prayers and singing of bhajans throughout the whole night. A succession of singers came from far and wide to join local bhaktas in expressing their love and joy for the glory of Mahaprabhuji, and some were moved to dance to God.

There was a true unity of spirit and those who attended were taken back in time to the simplicity of when Mahaprabhuji Himself was singing bhajans with His devotees;  some feeling His presence strongly.