At the invitation of the All Party Parliamentary Group – Indian Traditional Sciences (APPG), author and founder of the Yoga in Daily Life Scientific System, His Holiness Bharat Gaurav Paramhans Sri Swami Maheshwaranandaji or Vishwaguruji (most respected and honorable title received from members of the Kashi Vidvat Parishad), attended as guest of honor the United Nations 5th International Day of Yoga celebrations in London, UK.

Vishwaguruji addressed the distinguished audience at the House of Commons by praising India’s Prime Minister, Narendra Modi Ji, for proclaiming the International Day of Yoga (IDY) at the United Nations, NY, in 2014. Since then, IDY has been celebrated worldwide, including with great enthusiasm by Yoga in Daily Life disciples on all five continents. According to the words of Vishwaguruji, that singular achievement of Narendra Modi Ji clearly indicates the end of the age of Kali Yuga and the beginning of the era of Satya Yuga: “Yoga is one, it means Oneness. The first words written by Patanjali were 'discipline will create the path to Yoga', meaning just now – don’t think 'we will begin Yoga tomorrow', no, just now, we should make a sankalpa (a resolve), about what we should do.”

“Humankind should become vegetarian,” was the important message of Vishwaguruji at the 5th International Yoga Day celebration. There is no room for violence against any creatures living in the world and animals should not suffer for the pleasure of humans; they should not be exploited for food. “We should strive for healthy organic food, without poisonous pesticides, and we should protect fresh drinking water, nature and our environment,” Vishwaguruji declared.

As a tribute of appreciation for his 50 years of dedication to advancing the spread of ancient Indian original knowledge and wisdom of Yoga around the globe, Vishwaguruji received the Yoga Ratna (Jewel of Yoga) Award from the All-Party Parliamentary Group at the House of Commons IDY celebration. In the coming year – 2020 – Vishwaguruji will host and present the Grand Opening event of the world’s largest constructed OM symbol

– the OM Ashram in Jadan, district Pali, Rajasthan, India. Vishwaguruji also announced he has begun all necessary steps for the entry of the OM Ashram as a candidate for designation as a UNESCO World Heritage Site. 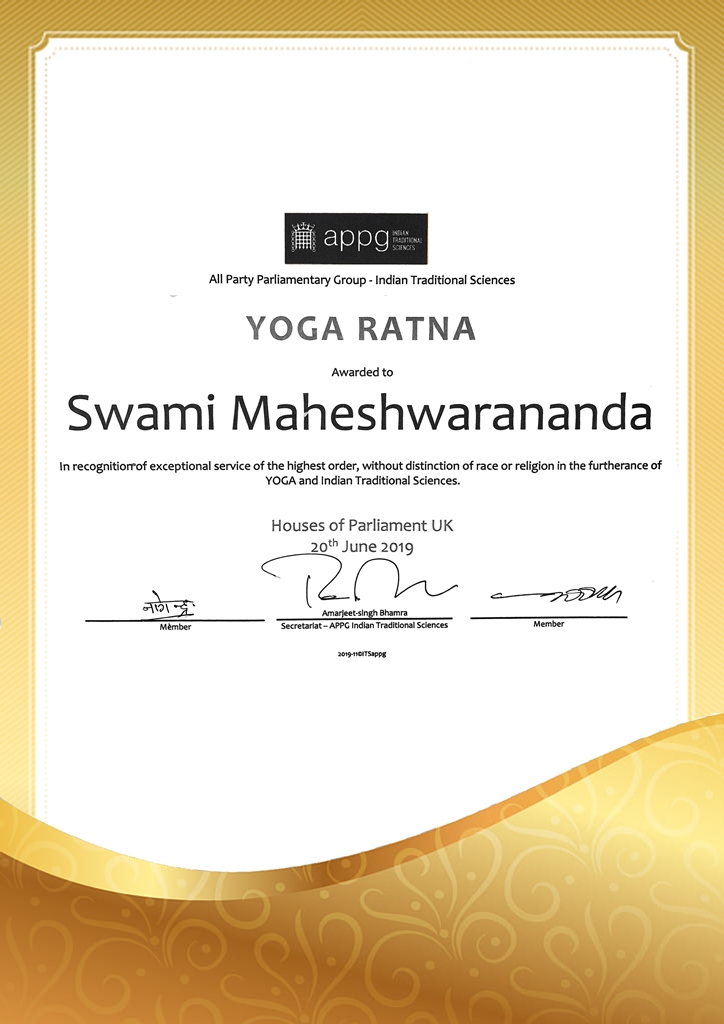 Special ceremony by the Basaveshwara statue in the center of London

During his IDY celebration visit to London, Vishwaguruji attended a special ceremony with a dedicated puja at Basaveshwara statue in the center of London. Basaveshwara (1134-1168) was a pioneer of democracy and social reform from South India, and his statue was unveiled in 2015 by Indian Prime Minister, Shri Narendra Modi Ji.

The International Yoga Day ceremony began at the Nehru Centre in London, where Vishwaguruji, greeted as Guest of Honor, stated: “Dear Sisters and Brothers, we are bringing again the blessing of all great saints, yogis, rishis, many other great saints, from thousands and thousands of years. They gave that knowledge to mankind of how to live life and how to protect each and every entity, take care of our vegetation and live on this planet as a divine planet, protecting all creatures in the water, on the earth and in space. From time to time, negative energy comes. There are always the rakshasas and devas, but always the Yogis and the Saints are protecting us. I send my respects to all of you and my wish that we come to the sattvic path – no meat, no alcohol – with discipline.”

Yet another event to which Vishwaguruji was invited as Guest of Honor, was the IDY Conference in India House in London, where he addressed international delegates by emphasizing the importance of yoga practice and of applying the great philosophies of Yoga into one’s daily routine. Through this discipline, we will gain all the physical, mental, social and spiritual benefits, as Vishwaguruji said: “We must feed the cow in order to receive the butter. Practice brings about reality.”

Vishwaguruji also led simple yoga exercises and a practical demonstration bringing to each person the opportunity to experience the life force, prana, in their body. He personally demonstrated the correct technique for chanting AUM –

– the primordial sound, through which the whole universe has come into existence.

Bharat Gaurav Vishwaguruji concluded his talk with a reminder that Yoga brings us to the understanding and experience of Oneness – that we are all One: brother and sister humans, animals, plants and vegetation, the whole universe: “One in All and All in One”.

His Holiness Paramhans Sri Swami Maheshwaranandaji was honored in 2014 at the House of Commons, British Parliament with the Bharat Gaurav Lifetime Achievement award; and awarded with the Order of the Croatian Star with the Effigy of Katarina Zrinska by the President of the Republic of Croatia in 2002.