Mahashivaratri (The Great Night of Shiva) in Om Ashram, Jadan

The whole ceremony, which took place at night, was going on in the Shiva Mandir, temple of Shiva...

Shiva is the universal unborn God, Mahadev, the Lord above without any parallel. Of all the Gods, He is the kindest, the most merciful and is happy with very little offering or sacrifice. With a little prayer, with a little request, He forgives everything. As the Cosmic Purusha, He is described as having thousands of eyes, hands and feet, but when He becomes invisible, His form is jyoti, light that removes darkness. That is also why we light candles, to summon the presence of Shiva. However, devotees require a certain symbol to be able to do their worship. And Shiva is symbolized by Shiva Lingam which represents light and consciousness. 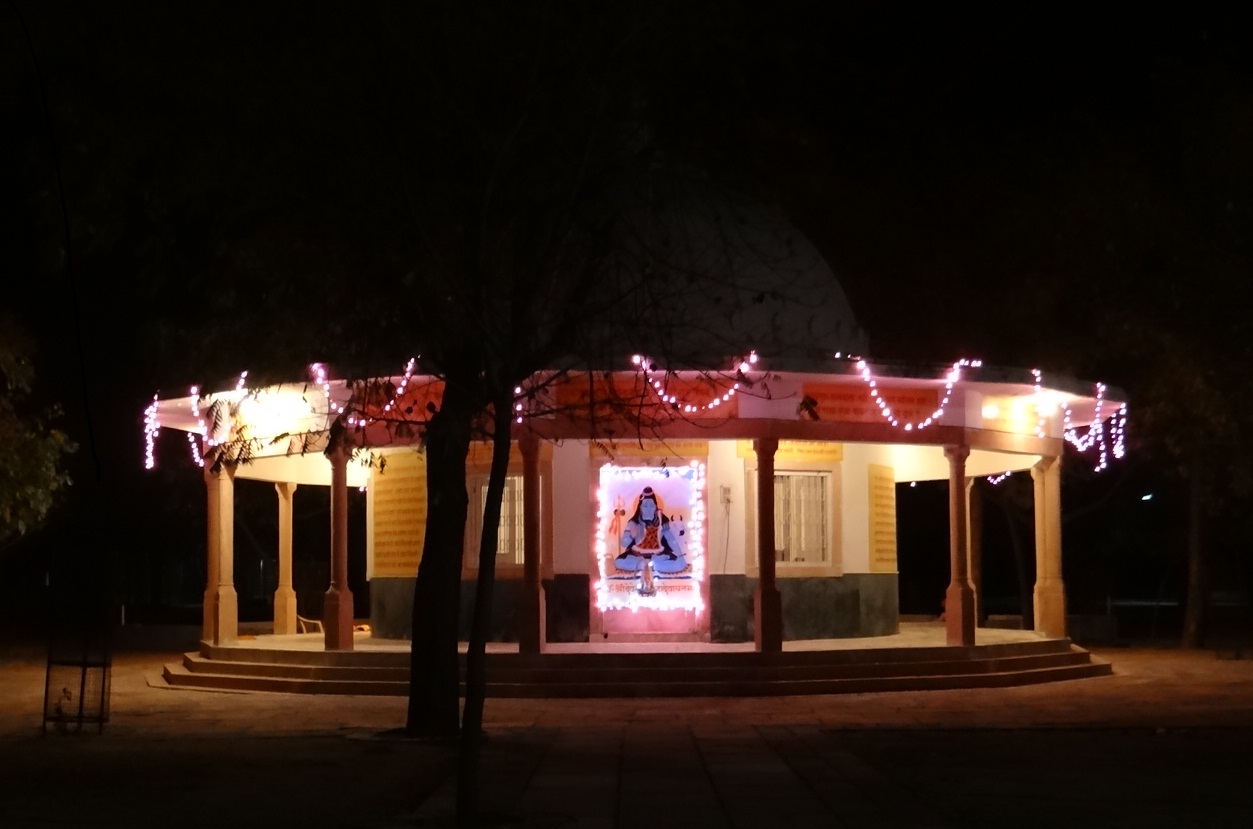 In India, there are 12 forms and places where Shiva is considered to be especially present, the so called Jyotirlingas, where big celebrations are taking place at the biggest festival observed in His honour, Mahashivaratri, which has been the custom from satya yuga onwards. However, those celebrations take place throughout the length and breadth of India, not only there. In that way, it is a common Hindu religious festival observed by Hindus all over the world. And even though the ceremonies are not practiced by all, the festival itself is acknowledged and respected by everybody belonging to the Hindu faith. The holiday falls on the 13th or 14th day of the dark half of the month Phalgun (February-March) and it is the day when Shiva was married to Parvati, the day of the union between purusha and prakrti, divine consciousness and nature.

On this day, devotees observe a strict fast for 24 hours and keep vigil all night. In Jadan Ashram some abstained themselves from food altogether, while others ate fruit, and there was the option to eat normal meals as well. Everybody could choose for him or herself, according to their ability. The whole ceremony, which took place at night, was going on in the Shiva Mandir, temple of Shiva. Abisheka, bathing of the Shiva Lingam, was done, as is customary for Shivaratri.  For this occasion pandits, Hindu priests, were invited. All the residents of the ashram had the opportunity to be present all night and participate in the rituals dedicated to Lord Shiva. The abhisheka took place 4 times in the night, with an interval of an hour and a half. Before the start of every puja, a moli, a special thread used at puja, was put around the Shiva Lingam. The abhishek was first done with water, then with rose water and after that beal leaves were offered. Those are considered dearest to Lord Shiva and remove the 3 tapas, Adhyatmika, Adhibautika and Adhidaivika. Then the abhisheka continued with panchamrit (literally meaning ‘five nectars’) that consists of milk, honey, ghee, sugar and yoghurt. Here it is important to note that the milk should not be boiled because that destroys the prana in it which makes it unacceptable as an offering to God. The purity of offerings to God, their untransformed, original energy is of essential importance. Then the symbol of Shiva was decorated with colours, namely chandan (sandal) which has a yellow brown colour, kumkum which is the red substance used for making tilaks, bhang which is greenish and ashes from a dhuni, a burning place used for fire ceremonies.  In addition to that, flowers, malas, fruits and coconuts were put on the Shiva Lingam. All the while, during the whole ceremony, the pandits chanted Rudri, special verses for Shiva from the Vedas. At the same time, mandir was resonating as all the bhaktas performing the puja were repeating the Panchakshara Mantra, Om Namah Shivaya, or the Mahamrityu Jaya Mantra. Finally, after every puja was finished, Shiva Arati, prayer for Lord Shiva, was sung and prashad was distributed.

In this way, the whole day is extremely auspicious and brings great benefits. Firstly, the strict fasting helps to control rajas (passionate activity) and tamas (inertia, laziness), bringing clarity and peace of mind. At the same time, doing a sacrifice, fasting out of devotion to God, fills the aspirant with even more devotion. That continues into the night by doing the puja and chanting God’s name, which uplifts and inspires the mind and brings great joy to the heart. At the beginning of the ceremony, we also made a sankalpa, a wish, which Lord Shiva fulfills because of being pleased with fasting, puja and japa, singing of the mantras. In that way, when He sees purity of heart, complete surrender, He forgives and grants everything. It is believed that the person who utters the names of Shiva during Shivaratri with perfect devotion and concentration is freed from all sins. He or she reaches the abode of Shiva and lives there happily, liberated from the wheel of births and deaths.