The Day of Shitala Devi

One week after Holi, a special holiday that is perhaps not so known around the world is observed in our ashram. It is the day dedicated to Shitala Mata or Sitala Devi, one aspect of Divine Mother, worshipped as the goddess of smallpox.

The holiday is known under the name of Shitala Asthami as it falls on the eighth day of the Hindu month Chaitra which is usually in March or April.

Shitala Mata is mentioned in many scriptures, especially in Skanda Purana as the goddess of smallpox. She is both the cause of the disease and the cure. When Shitala Devi first arose from a sacrificial fire, Lord Brahma told her that humans would always worship her, as long as she carried the seeds of a particular lentil called urad daal. Along with her companion, Jvarasura, the demon of fever created from the sweat of god Shiva, she travelled to visit other gods.

Somewhere along the way, her lentils turned into smallpox germs, and anyone whom they visited came down with a fever and smallpox. The gods asked Shitala Mata for mercy, and requested her to take her load of germs and go to Earth. She agreed and together with Jvarasura went down to Earth. Their first stop was at the court of King Birat, who was a devotee of lord Shiva. King Birat agreed to worship Shitala and give her a place in his kingdom, but would not give her supremacy over Shiva, so she threatened to infect his people. He was not swayed, and Shitala Devi released 75 different kinds of pox on his people. The disease spread far and wide, and there were many deaths. Finally, King Birat relented, and Shitala Mata healed him and his people. 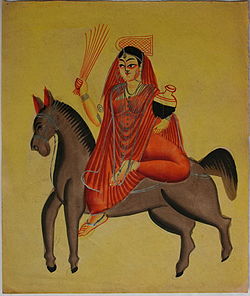 Shitala Devi rides on a donkey, and she has four arms. In her hands she carries a silver broom, a fan, a small bowl, and a pot of water. She uses these items to rid a house of disease–she sweeps up the germs with her broom, uses the fan to collect them, and dumps them into the bowl. She then sprinkles water from the pot (which is water from the river Ganges) to purify the house. Shitala’s name means “the cooling one”. With the change of seasons and coming of the hot period, it is essential to emphasize the importance of hygiene for human health and the worship of Shitala Mata provides the motivation to keep the surroundings clean and hygienic. 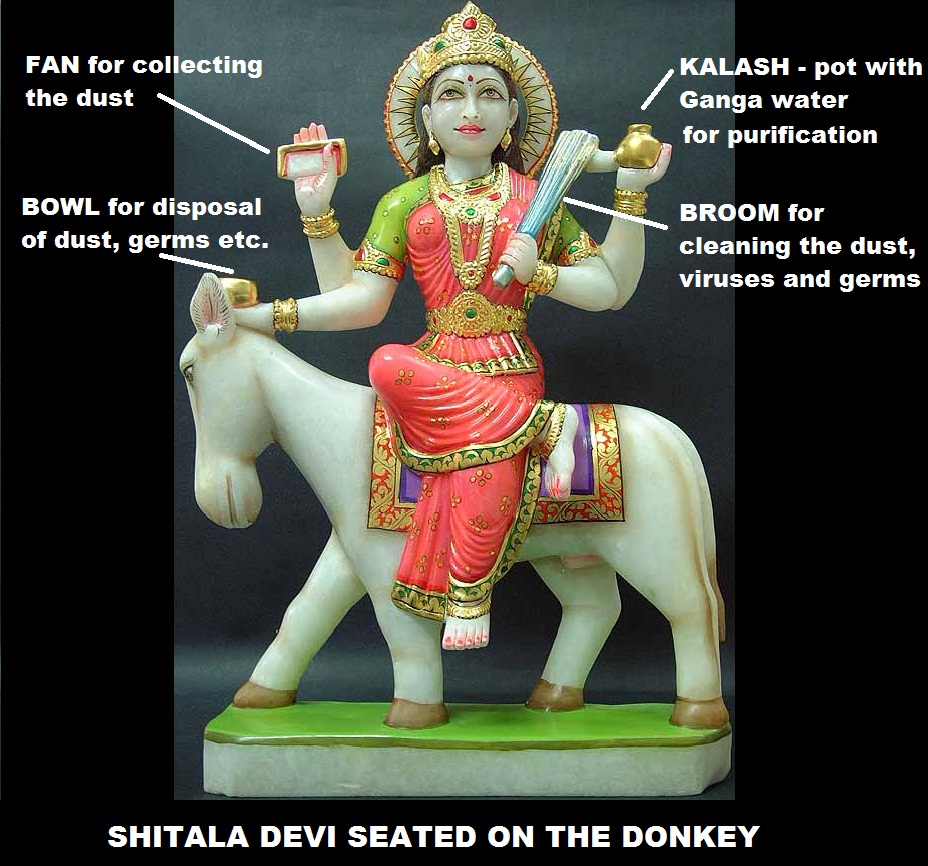 Basoda – food cooked the day before

Most foreign students and visitors at Om Ashram get to know of Shitala Asthami festival through the special food prepared on this occasion. The local customs say that in order to keep Shitala Mata cool on this day the fire should not be burned and the food should not be cooked.  That means one day before the holiday all kitchens in the villages are very busy as all food is being prepared in advance. Our cook, Janaki Bai, explains that ladies leave the food to cool down during the night. In the morning, the food is first offered to Shitala Devi in a ceremony.  Ladies of the house choose a special stone which symbolises Shitala Mata. It is installed on a red cloth, then worshipped with light, incense, flowers, kum kum, water, yoghurt, wheat, henna etc. Ingredients vary according to their availability and bhaktas’ feelings. Specially prepared food is offered to the goddess and then consumed throughout the day as prashad of Shitala Devi.

Such food is called Basoda coming from the word “basi” which means ‘’from the previous night.’’ The menu for the non-cooking day consists of dishes that do not get spoiled for a longer time on temperatures of Rajasthani spring which are usually above 35°C:

Unfortunately, photos provide only partial information about the event as they cannot convey the atmosphere, tastes, textures and smells. For a real experience one needs to visit the ashram. Welcome!