If we speak about education and raising children, then a child needs to stay in the family and in a close relation with mother and father till the age of 8. That is a necessary condition, which will prepare the child for studying in a gurukul under the guidance of an acharya. There he will remain till the age of 17, constantly acquiring knowledge. The environment of a gurukul is very pure and filled with positive samskaras. It was Lord Rama in treta yuga and later Lord Krishna in dwapara yuga, who gave great importance to gurukul education. Although they were the embodiment of God Himself and did not need to learn or study anything, they did so for the sake of humans, they themselves underwent gurukul education. An example set by saints will be followed by ordinary people.

A lady came with her son to one saint and asked him: “My child eats too much gur–sugar, please forbid him.” The saint was thinking: “But I am also eating gur-sugar, so how can I stop this boy from doing the same?” So he answered: “Bring your son to me after one month, I will instruct him at that time.” The lady was thinking that, perhaps, it would be some complicated procedure, so she decided not to worry and come after one month. In the following month the saint renounced eating gur-sugar because he knew that his words would have effect only if they were based on truth. After one month the lady came and again asked the saint to forbid her son eating sugar and expected a big treatment. When she heard mahatmaji’s simple words: “Boy, don’t eat sugar,” she was disappointed and said: “Oh, Maharaj! Couldn’t you tell us the same already one month ago, we’ve just unnecessarily spent 200 Rupees on transport. “No, I couldn’t, because at that time I was eating gur myself and therefore had no right to prohibit it to anybody else.” And that is the example. How the great souls act in the world so the people do.

Five qualities of a Student

In the whole world, Vedic Sanatan Dharma is the oldest culture. And the basic principle of its transmission from one generation to the next is the gurukul education, the parampara (lineage) of Guru – disciple relationship. A student in the gurukul should pay his attention only to studies. If he directs his interest in many other things, his study will not be successful and he will not become learned and wise. And a student should always try to understand what the meaning of the teachings which he or she gets from the acharya is. Like in the following story.

A guru instructed his disciple who was a bit dull to guard a pot with yogurt from crows. The disciple took a wooden stick and sat down by the pot. When some crow came near, he would chase it away. But when a cat came, he freely let it eat the entire yogurt from it. After some time Guruji returned and, upon seeing the empty pot, started inquiring about the yogurt. The boy answered that he was protecting it from crows but then a cat came and ate all of it. “And why didn’t you chase it away,” Guruji asked. “Because I was told to guard it only from crows,” was the answer. That is not the way to understand our teaching, it is blind.

To become a good student and a disciple, one should follow the precepts laid down by the Vedas:

Have the awareness of a crow (who is always aware of everything around it, where and what appears to eat, to steal etc), have the concentration like a crane (who stands motionless at the bank of a lake and when a fish is passing by, it quickly catches it), have shallow sleep like a dog (who immediately wakes up if anyone comes close), always eat limited quantities of food (fill half of your stomach with food, a quarter with water and leave one quarter empty) and renounce the attachment to your house and family (do not call home every weekend and narrate long stories of how you are, what you were eating, what your friends do and so on). These are the five signs of a good student.

If the student wants to be successful in his study, he should abide to these instructions. And above all this is the devotion, obedience and seva, service to the Gurudev. That brings the highest knowledge through His blessing.

Uddalak Rishi had one young disciple called Upamanyu. Rishi called him and sent him to the nearby village for bhiksha, begging for food for the ashram. When Upamanyu came back from the village and handed over all the bhiksha to his guruji, Uddalak Rishi ate everything at once, not leaving a single crumb for Upamanyu. Then he sent him for bhiksha again. The same thing happened and after some time the rishi sent the hungry Upamanyu to the village for the third time and again did not give him anything to eat, which went on for several days.

Once Uddalak Rishi asked him: “Upamanyu, you look so healthy and strong, what do you eat if I don’t give you anything from the three bhikshas?” Upamanyu replied: “Later I go to the village for the fourth time and eat whatever I get.” Guruji shouted at him: “What a mischievous boy you are! From today on you are not allowed to go for bhiksha and eat any food! Go and take care of our cows!”

Some days passed and Rishi Uddalak again called Upamanyu: “You look so healthy and strong, but you are forbidden to eat any food. How do you do it?” Upamanyu frankly said:”Guruji, as per you instructions, I don’t eat any food, I just drink the milk from our cows when I am with them out at the pastures.” Guruji got angry: “The milk, you are stealing from the poor calves. From today onwards you are not allowed to drink any milk!”

A few days later the rishi called his young disciple again: “Upamanyu, you do not eat anything, you do not drink any milk, because it belongs to the calves, but you look so strong and healthy, how is this possible?” Upamanyu answered: “Gurudev, when the calves are drinking milk from their cow mothers, then it makes foam at their lips and that foam I am drinking.” Uddalak Rishi became very strict: “You bad boy! Once again I tell you! You are not allowed to eat any food, to drink any milk, nor to lick the milky foam from the lips of the calves. Go and take the cows to pasture!”

For a few days Upamanyu was completely starving. Once when he was at the pastures and his hunger was unbearable, he plucked a few flowers of the akhra plant and licked the white milk which came out of it. He did not know that the plant is poisonous and causes loss of eyesight. Soon he became completely blind. One evening, as he was bringing the cows back to the ashram, he fell down into an open dry well, as he was blind, and became unconscious. The cows arrived to the ashram alone. The boy was helpless at the bottom of the well all night.

The gods in devaloka could not watch that hard exam anymore and sent god Ashwini Kumar with a pot of divine milk rice to save Upamanyu. In the early morning Rishi Uddalak also started from his ashram to the pastures and was calling the name of his beloved disciple: “Upamanyu, Upamanyu!” Ashwini Kumar came to the well, took the boy in the lap and brought him out. He told him: “Oh son, you are very hungry, have some kheer which the Gods are sending for you and which will also restore your eyesight.” Blind Upamanyu replied: “I won’t have any kheer.” Ashwini Kumar was surprised: “But why not?” Upamanyu said: “Without the permission of my Gurudev I am not allowed to eat anything.” That same moment Rishi Uddalak arrived and said: “Yes, Upamanyu, have some divine kheer, your exam is over.” Gurudev put his palm on the boy’s forehead and transferred all the divine knowledge to him and restored his eyesight. 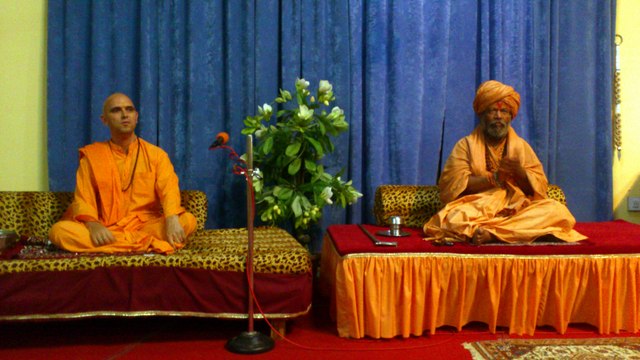 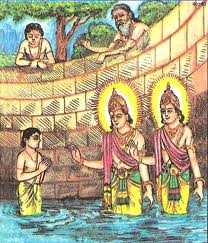 It is the Guru seva which brings the disciple to perfection and the highest knowledge. It is the same in the story of the divine master of Lord Krishna, Rishi Sandipani, who was living in Ujjain.

When Sandipani was a young disciple in gurukul, his Guru was extremely strict with him. He was often shouting at him, criticizing him in front of others, and he never ever said a kind word to him. In fact, the love of Gurudev for Sandipani was great but it was hidden in the Guru’s heart and nobody could see it. Everybody thought that Sandipani was a sort of an outsider. Sometimes, when disciples gathered around Gurudev, Sandipani always silently sat or stood the farthest. He often got some stupid tasks to do and he just kept running all day and night to fulfill them. 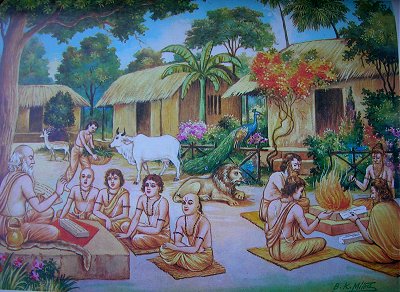 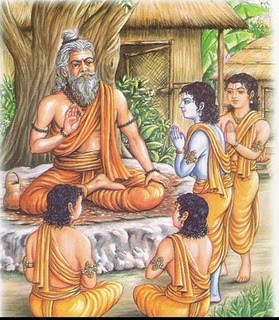 One day, when Gurudev was already very old, he called all the disciples and announced that he decided to retire. Everybody was eagerly awaiting what possession or position Gurudev would hand over to them. Everyone thought that Sandipani was not going to get anything and that it was proper for him to sit completely at the back. Gurudev gave his water pot to one disciple, his walking stick to another one, kharau – sandals to the third one, deer skin to the forth one and so on. Everybody got something, only Sandipani did not get anything. Then Gurudev got up and walked towards Sandipani. Tears were flowing like a river from his old eyes, he embraced him and said: “Sandipani, come, you get my Guru-gadi, the holy chair of this Guru Parampara. You completely fulfilled the duty of a disciple and I fulfilled the duty of a Guru.” Gurudev gave his blessing to Sandipani and transferred all the supreme knowledge to him. Then he told him:

“O Sandipani, in the whole Universe, Gurutatva is the highest. I give you the blessing that one day God, Lord Vishnu, Himself, will come to your ashram and stay there to serve you and massage your holy feet.” And so it happened, Lord Krishna became a disciple of Rishi Sandipani.

Dear students, use your time most efficiently. In this ashram you have the most auspicious conditions available. It is said:

Your Gurudev Swamiji became the Brahma and created all these buildings and facilities for you. He became Vishnu who is sustaining it, giving you buses and cars for transport, excellent food in your kitchen and, to bring the light of education to you, he gave you this school with all the teachers. And he became Shiva who is removing your ignorance. And when he is not personally present in the ashram, then there are his representatives like Swami Jasraj Puriji, Swami Premamanandji and others who help you to follow the path of knowledge. I offer many, many pranams to the holy feet of such a Gurudev who created this divine ashram. We should all realize how fortunate we are that we can live the life of a Guru and a disciple, which is a true blessing for our destiny.